Cary, NC – The Summer always brings a spike in gasoline prices but this year prices are particularly high, with national prices hitting a multi-year high and the Raleigh-Cary area standing out in North Carolina.

According to measurements by AAA, the average gasoline prices in the Triangle, which includes Cary, Raleigh and Durham, is $2.65 per gallon. That’s an increase of $0.08 since last week and average prices are higher than any other urban areas in the state, with Greensboro and Asheville the next closest at $2.63 per gallon on average. However, prices in rural counties are still higher on average.

Earlier this year, we reported that gasoline demand was unusually high in the Winter and that high demand is still going on, leading to the spike in prices.

“Expensive crude oil prices, unrest in the Middle East and strong domestic demand, are some of the factors driving spring gas prices toward new heights,” said AAA Spokesperson Tiffany Wright. “Gas prices could increase another five to 10 cents this season, but right now we don’t expect we’ll see the $3 mark.”

Despite North Carolina having the third-highest gas prices in the South – Florida and Georgia are higher respectively – it is still in the middle of national average gas prices. 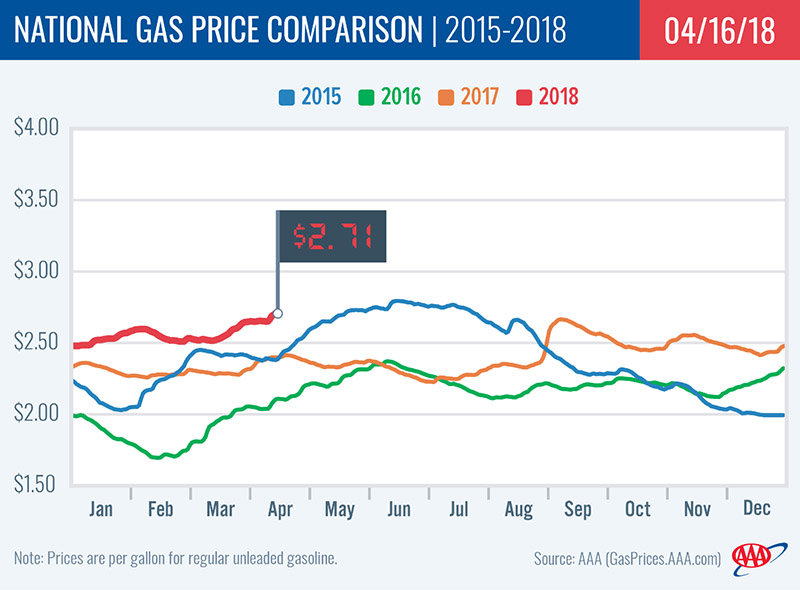 The Summer usually means road trips so taking gasoline prices into account will help budget for these trips or decide if they are worth it or not.

“We believe the majority of Carolinians planning to travel this summer, will do so with a road trip. With more expensive gas prices on the horizon, travelers should plan now for the additional costs,” Wright said.

These prices are still significantly lower than the record high ten years ago when the average price in the Raleigh area was $4.058 per gallon.

Also, there is the GoCary bus system that is set to expand service in the coming years. These routes also connect with the GoTriangle and GoRaleigh lines.