Cary, NC – The basis of garden design is simply organizing plants and flowers into a pleasing collection. You can organize plants by height (low in the front, tall in the back) or by succession (Spring flowers replaced by Summer flowers replaced by Fall flowers). Today, let’s talk about organizing a garden by color, specifically, the color red.

Color as an Organizing Principle

Color is the most popular organizing idea for most gardeners. We select flowers of a shade we really like, and then add something complimentary. I like yellow flowers, so I often pair them with something blue or purple to make them pop.

But some gardeners set aside an area for a mono-colored bed. A white garden is a popular variety of this type of design. White is said to be cooling to the visitor in hot weather. Imagine a bed of white flowers, a little shade and a bench. It does sound cooling.

Yellow is probably the most common for a single-colored bed, followed by pink and orange. Blue is the most rare, because not too many flowers are blue.

As an example, let’s look at red.

Red Flowers for the Sunny Garden

Red makes a big statement in the garden. It’s not subtle. It says “look at me.” Red in the garden is associated with heat and romance.

Roses are the prototypical red flower, famous in story and song. A red garden could do far worse than building around some Knockout Rose shrubs. This variety blooms from Spring to Fall, unlike heirloom roses which put on a big show in the Spring but don’t produce much during other seasons. 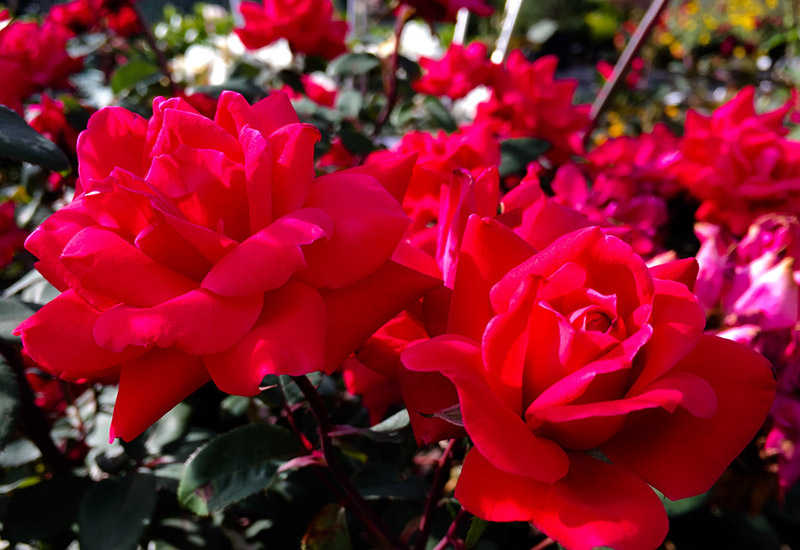 Not all flowers produce a red variety, but Gerbera Daisies sport one of the deepest, most saturated red flowers available in the garden. Also called Transvaal Daisy and South African Daisy. Grow about eight inches tall. 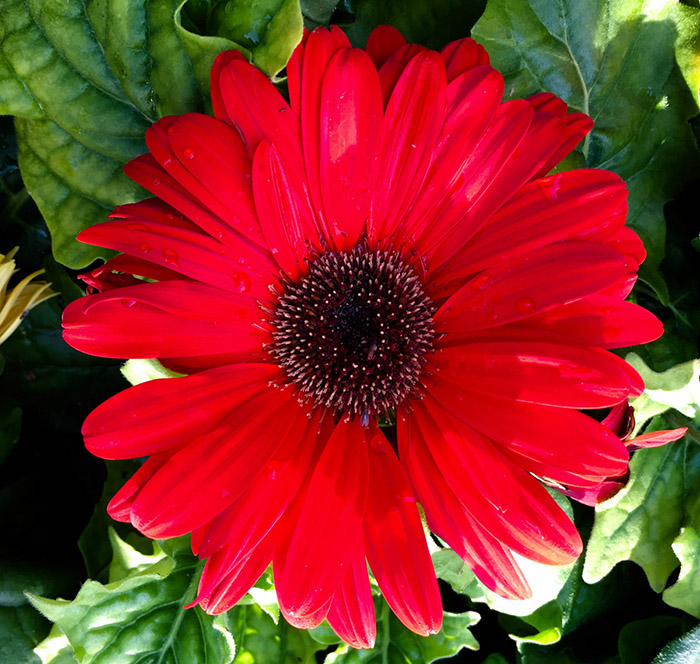 If roses are in the center of your red bed and Gerbera Daisies are toward the front, red Zinnias could fill in the middle ground. 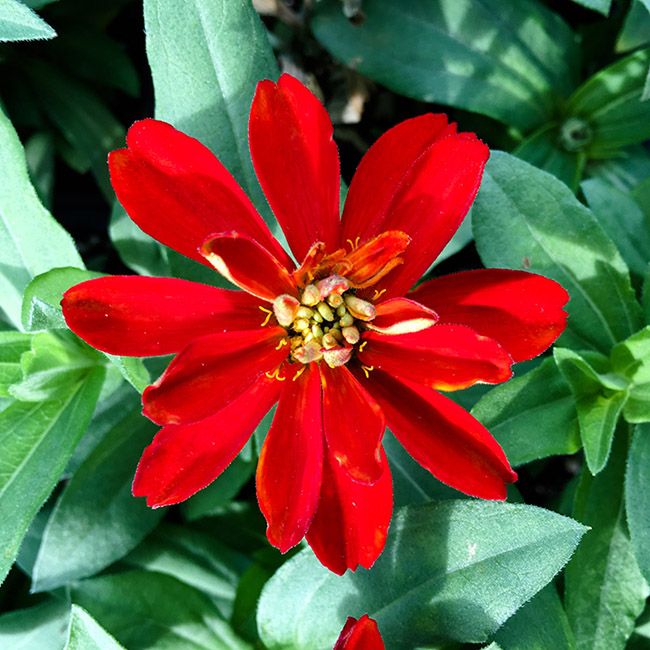 This next beauty is called Gala Red Verbena. Grows about eight inches tall and attracts hummingbirds. Good front of bed plant or in a container. 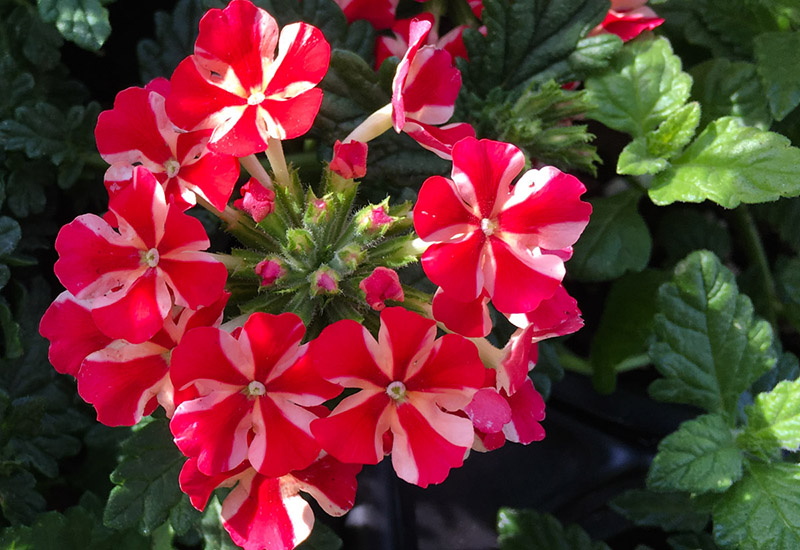 Celosia produces a fiery red bloom and an unusual texture in the garden. 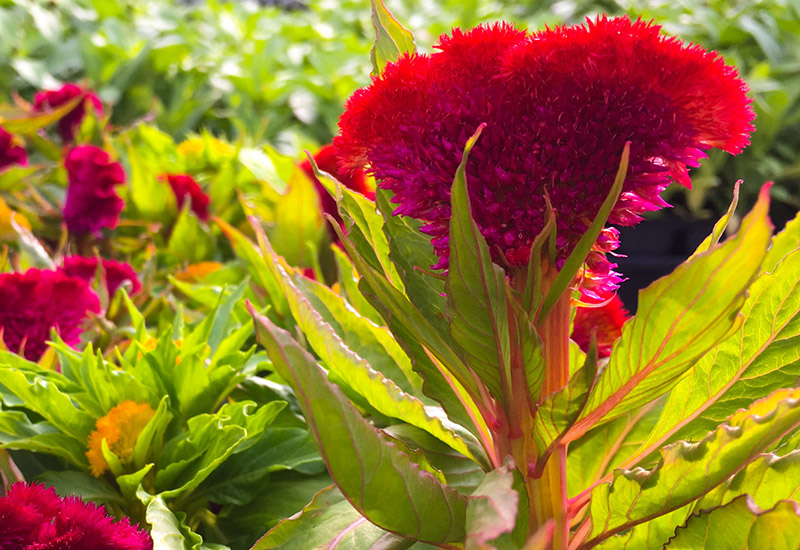 Petunias are probably the most popular bedding flower in the Summer garden across the Piedmont. Easy to grow, inexpensive, prolific. 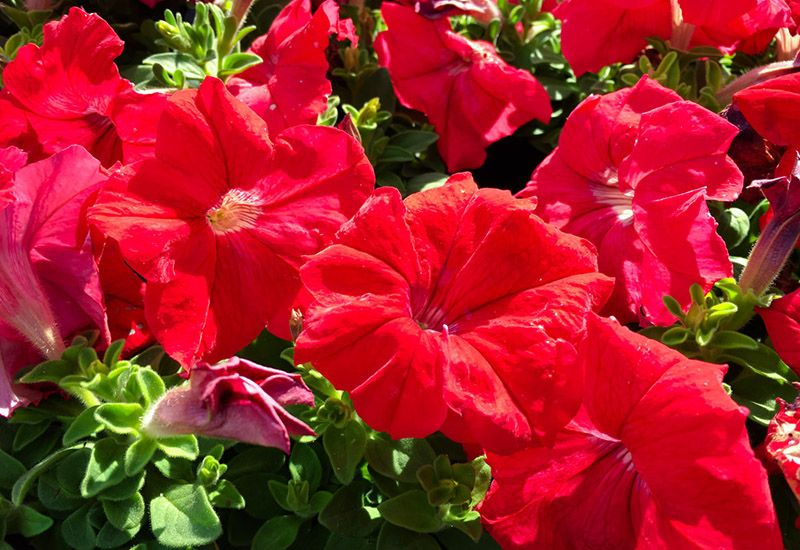 While many of the most colorful flowers need full sun, lots of choices exist for shade or partial shade.

Geraniums produce large blooms and make a big impact in the garden. They will tolerate a wide range of lighting conditions, but generally do well with morning sun and partial shade in the afternoon.

Salvia puts up an impressive show of small red blooms. Like Geraniums, they favor partial shade.

Impatiens come in lots of varieties. Standard or classic varieties thrive in partial to full shade. New Guinea impatiens, on the other hand, love full sun. 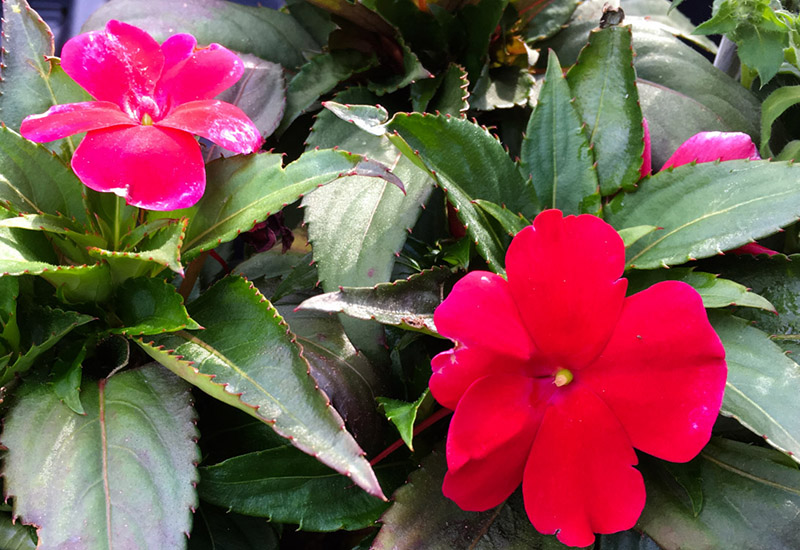 More Red for the Garden

Begonias thrive in the shade and come in a variety of colors, including red flowers with burgundy foliage.

Coleus is a shade plant grown for its colorful leaves. Seemingly available in hundreds of varieties, you can find predominantly red-leaved plants if you look around. And, sun-tolerant coleus has been appearing in the market for many years, so pick what works for your garden.

Caladium is also grown for its colorful leaves. Loves shade. Bulbs will not overwinter and need to be lifted in the Autumn here in the Triangle.

Design with Color Your Way

Whatever color you fancy, take a look around the garden store and create your own colorful oasis.

Story and photos by Hal Goodtree. The Gardening column is sponsored by Garden Supply Company on Old Apex Road in Cary.