North Carolina FC took on Atlanta United 2 at Sahlen’s Stadium at WakeMed Soccer Park on Friday, May 25, 2018; just three days after the home team defeated the Ocean City Nor’easters in the Lamar Hunt U.S. Open Cup to advance to the fourth round.

That win appeared to set a fire under NCFC as they got the lead in the seventh minute thanks to Donovan Ewolo and Daniel Rios moving fast. Ewolo got in close at breakneck speed, passed the ball to Rios and the two got behind Atlanta’s defenses until Ewolo got the ball and shot in between goalkeeper Alac Kann’s feet.

NCFC kept the pressure throughout the game, giving them a rhythm that Atlanta was unable to overcome. Steven Miller got to the end line on the opponent’s side and hit a close cross kick. It was not close enough to score on its own but it did result in an Atlanta player accidentally scoring on himself, bringing the score up 2-0 by the 21st minute.

The score remained 2-0 by halftime but in the second half of the game, NCFC stacked on another two points. In the 52nd minute, Rios was close enough that he could hit a straight shot at a tight angle. It was positioned just well enough to slip in and go past the Atlanta goalkeeper. Then to close the game out, Marios Lomis got a cross pass from Rios and scored, ending the game 4-0. 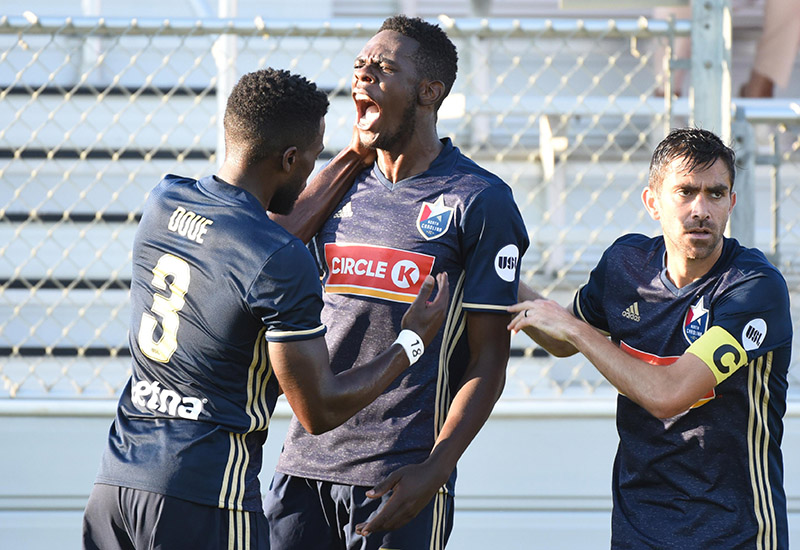 This is the fourth match in a row NCFC has won at home, and another game with a large number of goals by the home team. All this has NCFC Head Coach Colin Clarke saying he’s “obviously delighted.”

With this win, NCFC is ranked 12th in its United Soccer League group, out of 16 teams. Also, this is Atlanta United 2’s first season.

NCFC’s next home game is against Bethlehem Steel FC on Saturday, June 2, 2018 at 7 PM. Also, while it is not at home, NCFC plays the fourth round of the Lamar Hunt U.S. Open Cup on Tuesday, June 5, 2018 against MLS team D.C. United.