Cary, NC – In the final game of a four-match stretch at home, North Carolina FC defeated Ottawa Fury FC in an intense and high-scoring performance.

This Wednesday, June 13, 2018, North Carolina FC played their last home game at Sahlen’s Stadium at WakeMed Soccer Park before going back on the road. And after two losses to two other United Soccer League teams and an anti-climactic loss against DC United in the U.S. Lamar Hunt Open Cup after a penalty kick, the fans wanted a win before NCFC left for two weeks.

In typical fashion, NCFC started the game off fast and aggressive. That quick attack paid off as Connor Tobin got the ball in front of Ottawa goalkeeper Maxime Crepeau after receiving a pass from Kyle Bekker. Tobin then hit the ball in with his head, and moved so quickly that Crepeau seemed stunned, barely moving from his spot.

By the 30th minute, the lead doubled as Steven Miller got the ball to Daniel Rios, currently NCFC’s leading scorer. Rios was a little less than 10 yards out but he still got a shot in, hitting the back of the net on the right side. If that mounting lead wasn’t enough, just 13 minutes later, Austin da Luz hit a cross to Marios Lomis. In a shocking move, Lomis kick to redirect the ball sent it in an arc to Ottawa’s goal where it slipped past Crepeau’s fingers and gave NCFC a 3-0 lead.

“When Austin has the ball in the corner, I know he’s going to give me the ball – he’s going to cross it. So, I just need to come in front of my defender and just tap it in,” Lomis said. “I scored a similar goal in an Open Cup goal. I hope to score more goals like that.”

But the Fury were determined to put up a fight and responded to the home team’s offense with a goal shortly after stoppage time thanks to Ottawa player Kevin Oliveira. NCFC got back in the mix shortly after, with Steven Miller getting a clear shot at the Ottawa net in the 57th minute. From the edge of the box, Miller hit a low altitude shot and smoothly changed the score to 4-1.

Ottawa continued fighting until the last minute and pressure from the team led to an own-goal by NCFC, with the game finally ended at 4-2, giving NCFC a home win for the first time since late May.

After the performance against Ottawa, NCFC Head Coach Colin Clarke said the team deserved the win.

“We had to work hard to earn it – I can’t even count how many games [the team’s played] in how many days, but it’s been a long, hard stretch and we needed that one tonight,” Clarke said.

In such a high-scoring game on NCFC’s side, it can be easy to forget about goalkeeper Alex Tambakis, who made five successful saves for the home team. Currently, Tambakis has the third-most saves of any goalkeeper in the Eastern Conference.

The next home game is against Louisville City FC on Saturday, June 23, 2018. 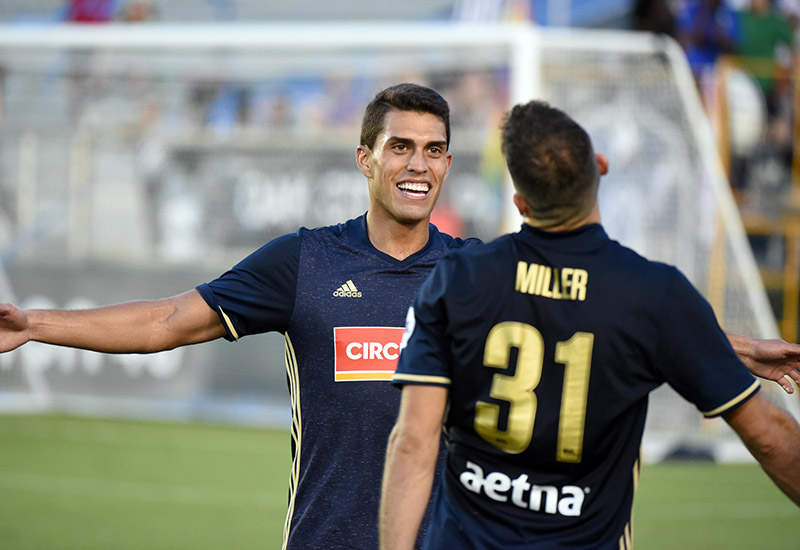