Cary, NC – This week was a busy week.

I started Monday by contacting all council members about the agenda for Thursday’s regularly scheduled council meeting. In my individual conversations with council members it was decided that two consent items should be pulled for discussion. The first was the proposal for hotels on Harrison Avenue because of a concern about U-turns, and the second was a proposal for the expansion of Glenaire to the neighboring shopping center to allow a council member to vote against the project. Concerns were also expressed about the storage unit proposal at Campbell Road because it was a gateway to Cary. Council members also expressed thoughts and ideas about the duties for the Planning and Zoning board (P&Z).

Later in the day I joined Mayor Pro-Tem Bush in a meeting with management and department directors to go over the agenda. We had a good discussion on the Harrison Avenue U-turn issue. The U-turn would be required because the property to the north of the proposal did not want to allow the easement to the Arboretum which would allow hotel guests to go left on Harrison without a U-turn. Staff believed it would be a good idea to set up a meeting with interested parties to discuss the easement.

Tuesday I joined council member Frantz in a taping of Cary Matters. This episode was different from all other Cary Matters tapings that I have done because it was about a difficult subject, human trafficking. We did the taping in one take and I would recommend that people watch. You may be surprised about the information presented. Over 40 million people are victims of human trafficking every year.

Later Tuesday I joined the rest of the council in a performance review of two of the council’s direct reports, our town attorney and our town clerk. While I can’t discuss what we talked about I can say that Cary is blessed to have some of the best talent in the state and nation serving our citizens.

Wednesday morning I discussed with CAMPO (Capital Area Metropolitan Planning Organization) staff the adjustments to our SPOT (Strategic Transportation Prioritization) points. SPOT is the methodology that NCDOT uses to develop the State Transportation Improvement Program (STIP). The process involves scoring all roadway, public transportation, bicycle, pedestrian, rail, and aviation projects on a number of criteria. Metropolitan Planning Organizations (MPOs), Rural Planning Organizations (RPOs), and the NCDOT Division offices also contribute to the final project score by assigning local priority points to projects. To put it simply the more points the projects have the more likely they are to be funded. SPOT projects are usually large, expensive projects and a cycle is five to ten years. To find out more about the projects and point assignments see http://www.campo-nc.us/funding/spot/prioritization-50-spot-5.

Wednesday all of council and dozens of staff members joined hundreds of people at the new venue, Chatham Station, to provide feedback on the second phase of the downtown park. In addition to having so many attend the event there were at least 800 comments submitted on line. I was able to talk to several people about what they expected in the second phase of the park. Everyone I talked to was very excited. Some were longtime residents of Cary that have decided to move to downtown. I believe that in the history of this council this will be one of our biggest decisions. 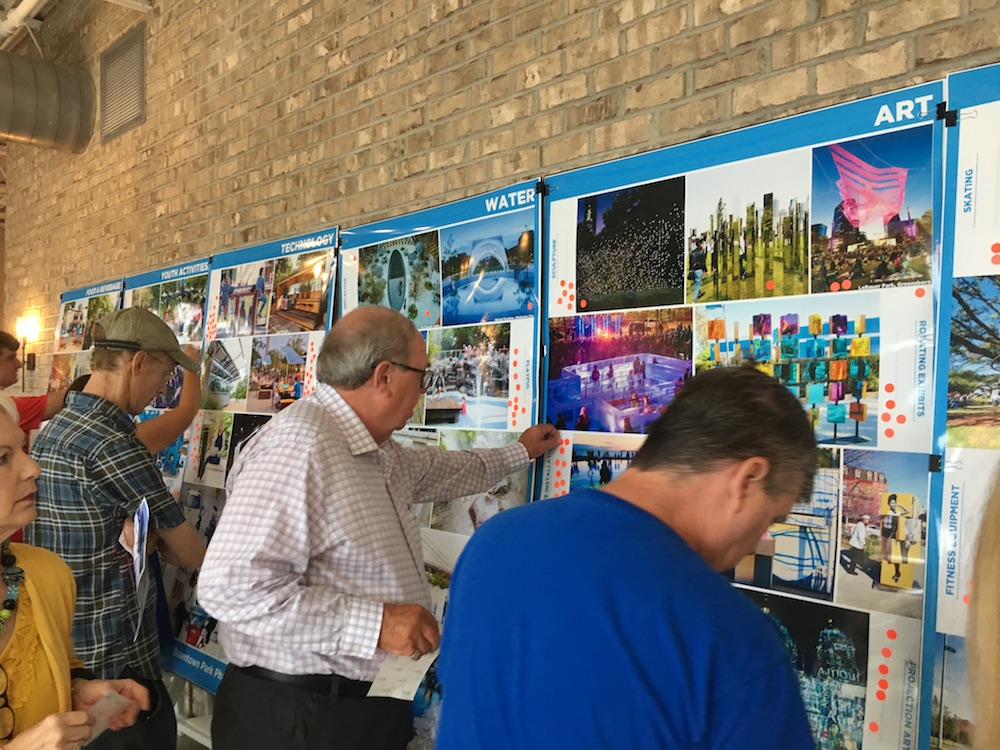 Thursday the council held the only regularly scheduled meeting for the month of July. The agenda included 12 consent items, 8 public hearings, and 2 discussion items.

Council Robinson and I each pulled an item from the consent agenda for discussion. Mrs. Robinson pulled the Glenaire expansion rezoning because she believed the proposal should have had more vertical mix. She explained that it would have been better with doctors’ offices were integrated in the project.

I pulled the North Harrison rezoning project because of the U-turn which would be required by hotel visitors if they wanted to go left on Harrison. I believe it is not good planning to force a U-turn. The reason the U-turn is required is because the property owner to the north of the site refuses to let the applicant use the easement to the Arboretum. Staff has reached out to that property owner and they have agreed to meet to discuss that easement. As a result council decided to table the North Harrison rezoning until the next meeting.

Public Hearings drew a lot of speakers. The Batchelor rezoning and annexation proposes a density of 3 units an acre. Residents attending the meeting stated that this is too dense and would destroy the character of that area. Hopefully, the applicant can meet with the residents and work on some of their concerns.

The Public Hearing for Lewey Drive also had a lot of speakers. They were concerned about flooding in their back yards. The history shows that the lot beside them had a pond which was filled in and a creek bank was altered. In addition, their homes were allowed to be built too close to the stream. That is, those homes would not be allowed to be built today. The applicant stated that they will be working on solutions to present with the proposal to help with the flooding issues.

Under discussion the council considered changes to the membership and duties of the Planning and Zoning board. After much discussion not much changed. We did decide not to hold public hearings at the Planning and Zoning Board because they not accountable to the citizens and are not the decision makers. That is, their duty is to provide a recommendation to the council.

A vote to change the number of members on P&Z from 9 to 7 failed. It was also decided that ETJ members should remain as a full member and not be limited to ETJ issues. A decision on what the board votes and comments on was tabled until our August 9th meeting. Most council members strongly favored letting the board members talk about anything in their decision making process and make their recommendations without restrictions. The town attorneys reminded us that P&Z members are required to make a recommendation on whether or not a proposal meets the community plan. The attorneys will rewrite the proposed change to include council’s suggestions and that will be available at the August 9th meeting for a vote.

After the regular agenda the council went into closed session for about an hour to discuss two issues. Our meeting concluded after four hours. 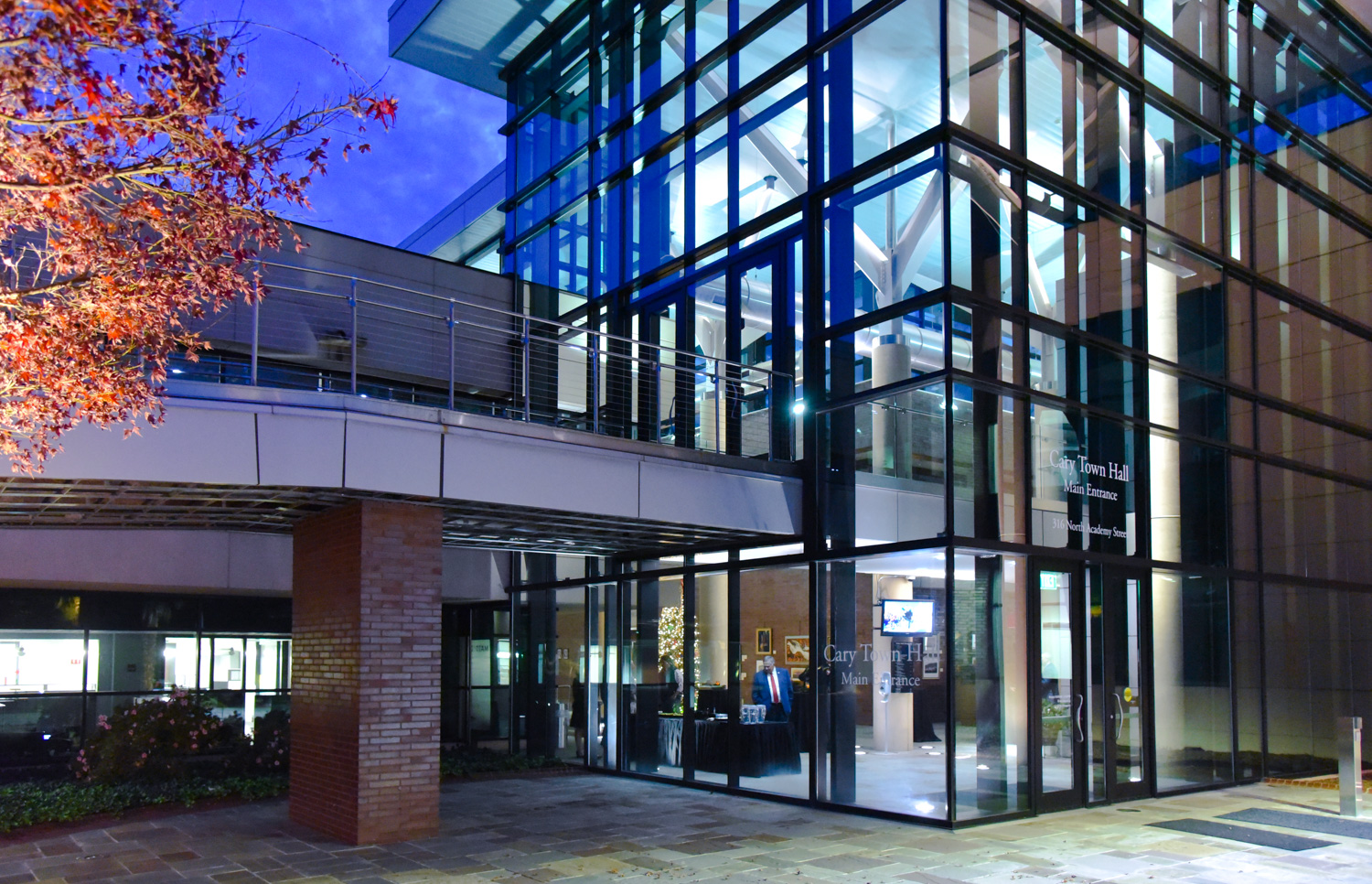 Friday I was notified by the National League of Cities that my State of Cary from February was included in their opioid section. Good! That is a very important topic.

On Wednesday, the Town hosted the first Community Workshop for the Downtown Cary Park, Phase II project. The meeting was hosted at the newly opened Chatham Station in Downtown Cary. The meeting was designed to gather input from citizens on ideas for future park expansion. Over 300 citizens attended and participated in several exercises during the workshop. The consultant, the Office of James Burnett (OBJ), led the workshop and remarked about the impressive attendance and enthusiasm. Simon Beer, Project Manager for OJB, commented that Cary’s attendance and interest has surpassed his experiences in other communities. The growing excitement by Cary citizens is further evidenced by the completion of over 800 online surveys within a 48 hour period this week.

Thank you to everyone involved in planning the Community Workshop on Wednesday. It took an incredible effort to pull off such a successful event. Job well done!

Town staff will join Council members and the RTA business coalition on August 7 for a tour of Richmond’s new Pulse bus rapid transit system and enhanced transit network. This will be an opportunity for Cary to learn more about the BRT planning process and lessons learned from Richmond’s implementation of service.

Construction on the Pulse began in August 2016 and was completed in June of this year for just under $65 million. Fourteen stations are spaced roughly a half-mile apart over the 7.6 mile route. The average speed of the Pulse is 13.2 mph compared to 8 mph for local bus service, saving a rider about 20 minutes from end to end. For comparison, BRT routes in the Wake Transit plan are projected at an average speed of no less than 16 mph.

In preparation for Lazy Daze in August, three power panels have been installed in the median of Town Hall parking lot. Those additional panels will provide power for the food truck area of Lazy Daze. In addition, upgraded power has been installed at the Page-Walker garden.

Postcards will go in the mail this week to stakeholders along the Green Level West Rd. study area corridor to notify them of the first of two public meetings. The first meeting will take place on Wednesday, September 26 from 5:30-7:30 p.m. at Fire Station 8. This will be an informal open house to educate citizens on the project and understand their vision for the Green Level Church Rd. corridor through the Green Level Historic District. Study deliverables will include a context-sensitive typical section for the corridor that balances future transportation needs with the district’s unique historic rural character and charm. There is currently no funding designated for design and construction of the future street improvements.

As a follow-up to the Town’s participation in the Smart Cities Readiness Grant, staff conducted a system of record workshop to document Cary’s systems, applications, and networks. This is a significant step to implementing our Smart City Vision as well as creating a data dictionary, which is a fundamental piece of our Data Management Program.

The FY19 Critical Water Line Project will begin Monday. This is the third year of a five year capital project. The contractor, working on behalf of the Town, will begin locating and marking critical, non-metallic water infrastructure on SE Maynard Rd, between Cary High Water Tank to near E. Chatham St. Work is expected to last eight weeks. The project has been coordinated with NCDOT to ensure the Town is not conflicting with NCDOT’s repaving operations or cutting locate holes in newly repaved areas. Additionally, GoCary bus stops will not be blocked or impacted by the work.

Following our annual tradition, the class of “2019” was added to the Maynard Tank next to Cary High School. The Maynard tank is the oldest of the town’s six elevated water storage tanks. It was built in 1966 and holds 500,000 gallons of water.

We received word this week from the National League of Cities (NLC) that Mayor Weinbrecht’s State of Cary speech was included in their annual report. The NLC shared Mayor Weinbrecht’s perspective on the opioid epidemic under the “Opioid” section of the report.

Next week’s activities include staff meetings, an open meeting about adjustments to GoCary service, and a performance review of a council appointed staff member.

Well, that is all for this week. My next post will be on Sunday, August 5th.  Although I have Facebook and Twitter accounts those are not the best means of communications with me. Please send all Town of Cary questions or comments to Harold.Weinbrecht@townofcary.organd email personal comments to augustanat@mindspring.com.

From the blog of Cary Mayor Harold Weinbrecht. Photos by Hal Goodtree and Lindsey Chester.

Cary Town Council: N Harrison Hotel, Changes to Planning and Zoning Board and...
Scroll to top