Cary, NC – The latest Cary Town Council meeting saw extensive discussion on potential changes to the Planning and Zoning Board and rezoning to build a hotel along N Harrison Avenue, neither of which saw resolution at this meeting, as well as several Public Hearings and a vote on the new Glenaire building.

The Discussion Item that saw the most discussion at the Thursday, July 26, 2018 Cary Town Council meeting was over changes to Cary’s Planning and Zoning Board. There was a Public Hearing on these changes in mid-June, which included:

The Planning and Zoning Board was in unanimous support of those final two items but were split on whether the board size should shrink and all were opposed to limiting ETJ members to only vote on ETJ items.

The Cary Town Council only voted on the first two items, with the questions about Public Hearings and how the P&Z Board will vote to be reworked for the next Town Council meeting on Thursday, August 9, 2018. On the question of ETJ members, both P&Z Board Chair Mark Evangelista and councilmembers such as Ed Yerha said board members do not vote as representatives of their area but vote as residents giving their perspective.

On the other hand, Councilmember Jack Smith said he wants ETJ members to just represent and vote on ETJs and said this is consistent with how other municipalities act.

On the question of the P&Z Board’s size, Yerha asked what problem this was trying to solve. Councilmember Don Frantz said, from his experience as board liaison, he thought the smaller size would result in a more cohesive and efficient board. When the topic came up for a vote, it failed, with only Frantz, Smith and Mayor Harold Weinbrecht voting in favor.

For the two board changes that the P&Z Board members supported unanimously, Town Council wanted to adjust the language in the motion. With the P&Z Board no longer voting in support or opposition and instead voting on CCP consistency, Weinbrecht said he is most interested in each member’s thoughts and opinions and was worried this change would cut down on ideas shared.

Other councilmembers also said just because a rezoning is consistent with the CCP, it does not mean they necessarily agree with the proposal.

“You can make pretty much anything consistent with the plan,” said Councilmember Jennifer Robinson.

In their votes, P&Z Board members also have to write out their reasonings and thought process so Frantz said he feels the opinions of the board would still be shared under this change.

The other part of the P&Z Board changes would make it so only Town Council holds Public Hearings and not the P&Z Board. All councilmembers appeared to support this because it puts people in front of their elected officials but some expressed concern about having in effect two Public Hearings for each proposal.

Frantz suggested Town Council should only hold a Public Hearing if they feel changes to a plan are serious enough to warrant it. The language in this piece of the P&Z Board changes, as well as the language related to what P&Z Board vote on and how they express themselves, will be edited and reworked with Town Council in advance of the Thursday, August 9, 2018 meeting.

While not initially a Discussion Item, the vote on rezoning for a hotel on N Harrison Avenue was changed from the Consent Agenda to a regular Discussion Item by Weinbrecht. This would be a 252-room, seven story hotel along N Harrison Avenue, next to the Arboretum shopping center. The P&Z Board voted 8-0 in favor of the rezoning, though Evangelista said there were concerns about traffic.

One of the other concerns with the hotel proposal is there will be a bulb-out put in the road to give drivers a U-turn in order to leave. Currently, it is not clear if there will be connectivity between the hotel and the Arboretum because that would use a road used by the nearby Reedy Creek Investments LLC. The lawyer for the investment firm spoke at Public Speaks Out and said the road is meant for medium density residential and using it for hotel traffic would be unlawful.

Also at Public Speaks Out, five speakers were in favor of the hotel plan, three of whom were involved in the project, one was the property owner of the Arboretum and one was a nearby resident who thought the hotel would generate economic activity in the area. One local resident also spoke in opposition, saying the traffic around her neighborhood is already very high and this would make it worse.

Weinbrecht pulled the item from the Consent Agenda and said he had concerns about the traffic, particularly the traffic pattern created because of the lack of connectivity.

“This forces visitors to make a U-turn,” Weinbrecht said. “In my mind, that’s bad planning.”

Town Council tabled the item in hopes the investment firm and the hotel developer could negotiate the point of contention and come to a resolution.

One other Consent Agenda item was pulled for a vote, this time for the new Glenaire space. This rezoning would take 12 acres and part of the SW Maynard Road shopping center and convert it into five buildings for senior living. One speaker during Public Speaks Out voiced support, saying as a nearby resident he would welcome Glenaire as a neighbor. 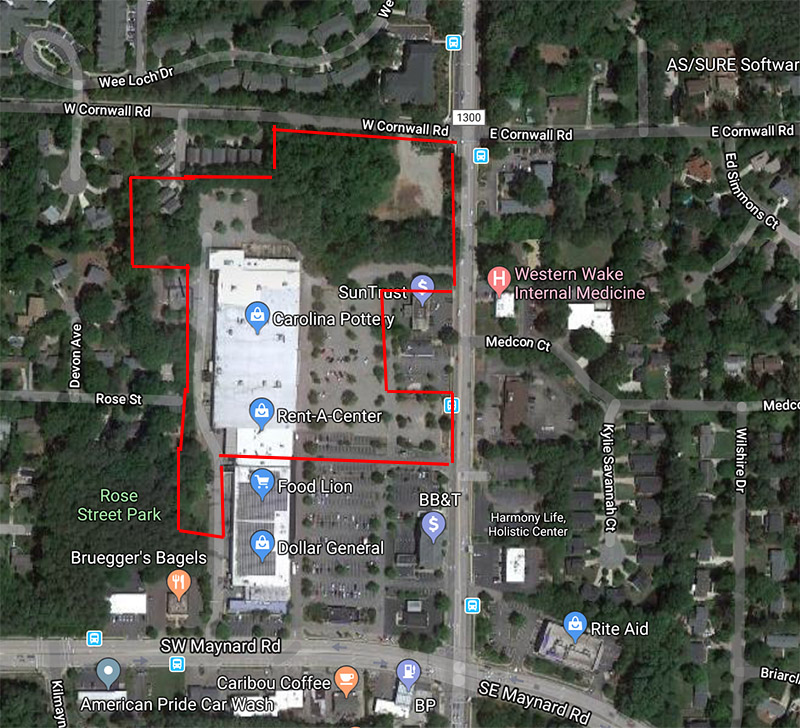 Robinson pulled the item and said she had concerns this would turn a mixed use area into a use that is not what she considered to be mixed use. Robinson suggested this might not be the right fit for this use but she was the only no vote, with the rest of Town Council passing the rezoning.

The other Discussion Item was for a new radio tower in the Regional Water Reclamation Facility land. This would be a 400 foot tall tower and be used for emergency and police services. It would not be subleased for any commercial purposes but Mayor Pro Tem Lori Bush asked staff to look into whether this tower could be utilized by neighboring counties. Town Council passed the item unanimously.

The Public Hearing that saw the most public input was an annexation and assemblage for around 118 acres of land between American Tobacco Trail and the Chatham County border line. This would bring in age-restricted detached dwellings and townhomes, with three dwellings per acre, a maximum of 20 percent townhomes and no townhomes east of Wimberly Road.

This area is in the Green Level Special Planning Area which calls for the area to have a “rural” character. There are few public services in the region currently but the applicant’s lawyer pointed out that this is near a “destination center” as designated by the CCP so more attractions and services will come. 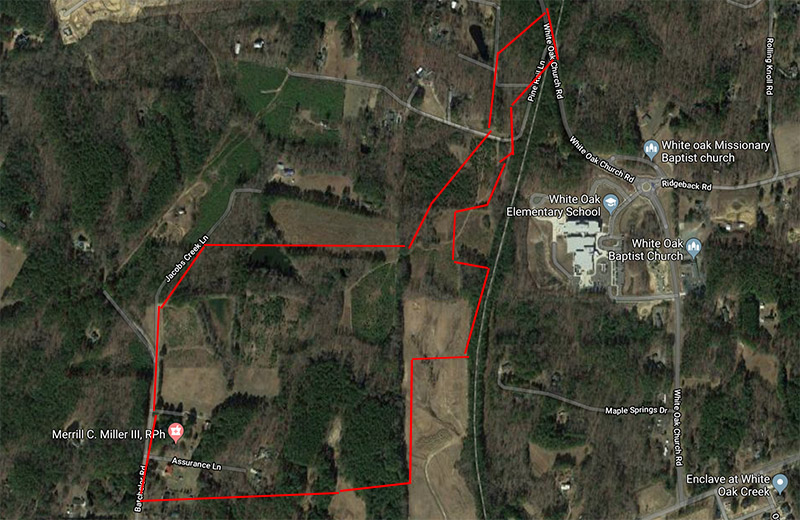 Four speakers came to the Public Hearing, all in opposition. The overall sentiment was the density proposed would upset the small town, rural feel the area already has. One speaker was also concerned about water runoff generated by the development.

Many councilmembers said they support an age-restricted use here and even said they see the need for density in Cary but still said it did not meet the needs of this particular Special Planning Area.

“We may have to look at density differently in today’s world but that doesn’t mean we can’t put a high bar up,” Smith said. The annexation and assemblage went to the P&Z Board for their recommendation.

Another Public Hearing that saw significant public comment was to annex and rezone 6.7 acres by Levey Drive and NC-55 to conditional use residential, with a minimum lot size of 8,000 square feet. This neighborhood would be adjacent to the Brookstone neighborhood, which has similar lot sizes except the applicant here is asking for smaller setbacks in the interest of what she called flexibility.

The tricky piece of this area is the stream that runs through it has been changed since Brookstone was developed and a pond was filled in with excess dirt, which has also directed the stream to overflow in one direction during heavy rainfall.

Three speakers, all nearby residents, talked about the flooding and stream issue in their comments, with one speaker also talking about added traffic. One speaker said she could see the project being done well but acknowledged the obstacles.

Town Council asked about the possibility of restoring the stream to its original state. As it turns out, based on staff estimates, just hauling the dirt out for that project would cost $500,000. Weinbrecht asked for more study on what can be done at this site to help with the stream problem. Bush also expressed concern that the setbacks were lowered with nothing given in return.

“If you want something from use we wouldn’t normally provide, give a little something,” Bush said. The annexation and rezoning went to the P&Z Board for their recommendation.

Among the other Public Hearings was a rezoning of around eight acres south of Crosspointe Church. This would be in a mixed neighborhood area with detached houses or townhomes. There were no speakers at this Public Hearing but Robinson and Weinbrecht talked about a lack of recreation options in the area and no conditions put in the rezoning to include a sizable gathering space.

“If you don’t have conditions, we have to assume the minimum,” Weinbrecht said.

Three other annexations were also up for Public Hearings. In two – one on Green Level West Road by NC-540 and one along Jenks Road near Apex – the only speakers were the applicants expressing enthusiasm for the projects. The other annexation was for a satellite piece of land along Pierce Olive Road by Holly Springs Road.

The only Public Speaks Out speaker who did not talk about an above item was a resident who shared a study on bike-friendly infrastructure, particularly in the city of Amsterdam, and what Cary could do to better protect cyclists from cars.