Cary, NC – The first Cary Town Council meeting of the Summer was a long one, with Public Hearings on the budget and several annexations, possible changes to the Planning and Zoning Board and a vote on the Kildaire Farm and Penny Road gas station.

The zoning conditions limit the land use to a filling station and convenience store and includes buffers, building setbacks and conditions to reduce stormwater runoff. These conditions would set the store’s hours of operation to 6 AM and 12 AM.

This item was originally up for a vote in early May but was tabled in order to allow residents and developers more time to talk and share information about the project. Cary Mayor Harold Weinbrecht said felt this was accomplished. 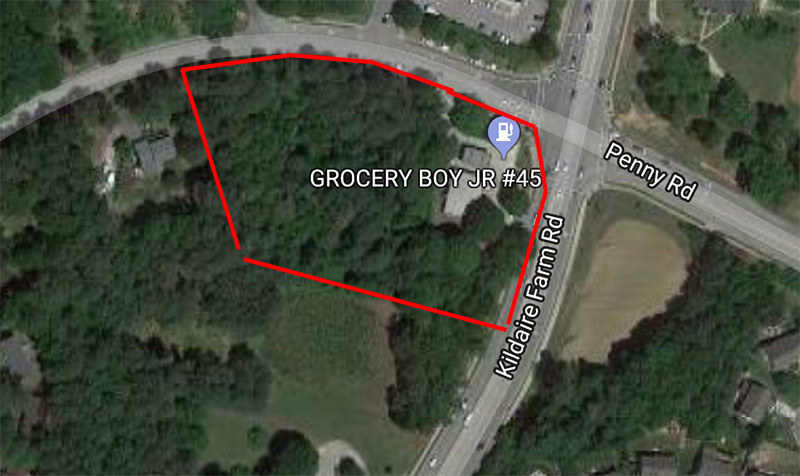 During Public Speaks Out, there were two neighboring residents which talked about this item, both of whom had attended the information meeting between residents and developers. One speaker said she was thankful to the town for giving them the time for the meeting and said she was more reassured by the information even if she was not happy about the proposal. The other speaker was more adamant in his opposition, saying it would degrade the neighborhood and be a site for nefarious activity.

The Planning and Zoning Board recommended the project for approval with a vote of 5-4. Board Chair Mark Evangelista said the “no” votes were primarily concerned about traffic while the “yes” votes stated that the size of the intersection warranted a gas station of that type. The vote was also taken when the proposal was for 20 filling positions instead of 18.

For the councilmembers who spoke about the plan, most said they felt the project was too large and would have preferred something smaller that could then grow over time as the intersection grows.

“The dilemma is, does the greater good outweigh the magnitude of the fueling position?” said Councilmember Jack Smith, whose district includes this site.

However, those same councilmembers said the conditions put in place by the applicant satisfied the council’s needs and Smith said he was particularly surprised the applicant agreed to put in conditions to make the convenience store close at midnight. Town Council voted for the rezoning unanimously, though Councilmember At-Large Ed Yerha said after all of these deliberations, “it had better be the best dang gas station around.”

There were three other Discussion Items on the agenda and each was run through relatively briefly. The first was a vote on amending the zoning conditions for the Weston Manor neighborhood, where they are required to have a bridge on their pedestrian trail but stormwater continuously destroys it. This vote would get rid of that requirement so the neighborhood is not fined for the lack of bridge.

The Planning and Zoning Board voted 8-1 on the item, with the no vote saying the neighborhood was not offering anything in return. Otherwise, Evangelista called it a “no brainer,” and the Town Council seemed to agree, voting unanimously for it.

Also up for a vote was the funding agreement for the Wake County Hospitality Tax, which goes to fund venues around the county. Cary asked for funding to cover both LED lighting improvements for WakeMed Soccer Park and improvements to the lighting and sound system at Koka Booth Amphitheatre but received less than was requested, with $400,000 coming in. This vote would use that $400,000 on just WakeMed Soccer Park, with the town matching it with $1 million in the FY2019 budget, as well as $350,000 in that same budget for the amphitheater improvements. Town Council voted for the funding agreement unanimously.

The final Discussion Item was the Town of Cary’s Open Data Policy, which lays out the policy on Cary’s public records and how it will make those available. Cary already has an open data portal online, but the idea behind the policy is it will keep the town and future town officials accountable. Town Council voted for the policy unanimously.

Two items on the Public Hearing were the annexation and rezoning of Wake County land along Arthur Pierce Road – 19.6 acres in total. The new zoning would put conditions in place limiting housing types to detached dwellings and townhomes, a density limit of three units per acre and a limit of 75 percent townhomes. The site also includes a historic home from around the 1850s.

Three speakers came to the Public Hearing, with each voicing opposition. The concerns were that townhomes would abut their single-family homes, it would be too dense, it would increase traffic and there is wildlife near a stream on the property that could be negatively impacted or destroyed. One speaker said that when he moved there, he was told by his real estate representative that this land would be a town park, and while the town has identified this region as a place they want to put a park, no land has been purchased. Another speaker said he did not want the roads in his neighborhood connected to this new neighborhood’s. 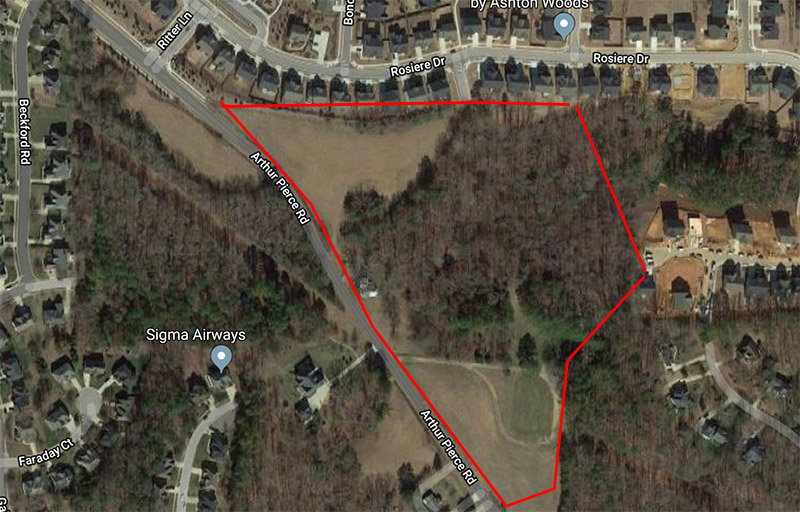 The approximate location of the proposed annexation and rezoning

Town Council said the road connection is a condition they have in place across Cary.

“The goal here is to create a neighborhood that other neighborhoods want to connect to,” said Councilmember Jennifer Robinson.

Councilmember Don Frantz also said the stream had a 100-foot buffer around it so it would be largely protected, though he also pointed out that surrounding neighborhoods were also wildlife habitats at one point. The proposal was sent to the Planning and Zoning Board for their recommendation.

One Public Hearing dealt with rezoning Residential Multi-Family and Office and Institutional land to a Mixed Use District at the intersection of Jones Franklin Road and Macedonia Road for the purpose of a building with a 75-foot maximum height to use as either an age-restricted multi-family housing unit or life care facility for seniors. There are architectural conditions for its appearance, conditions to include a bus route stop pad, stormwater control measures and a request to have 1.39 parking spaces per unit, as opposed to the town requirement of 2.25. 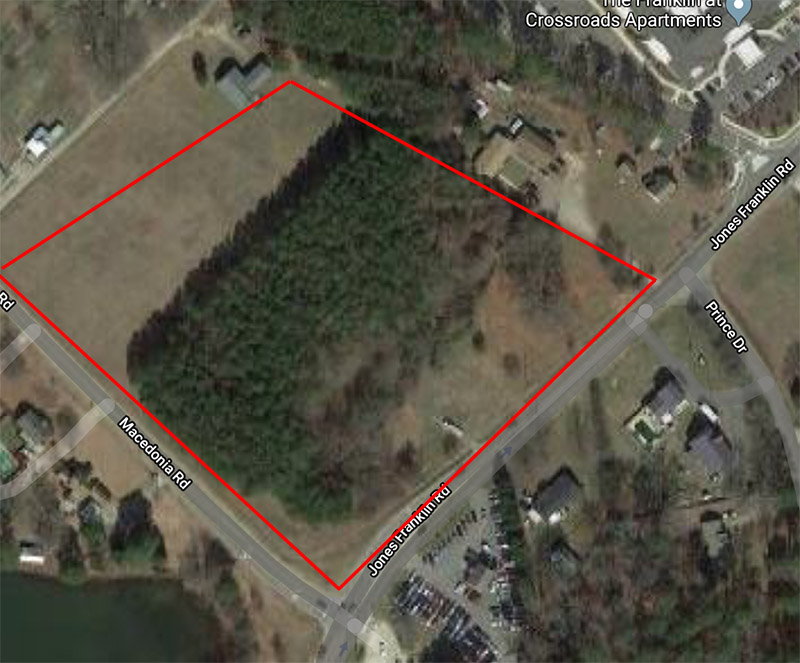 The development would also involve cutting down a champion tree but during the Public Hearing segment, one of the arborists hired to study the tree spoke and said the tree is diseased and already has dead branches so it is a hazard and is not a good candidate for preservation. There were two other studies of the tree that concur.

Weinbrecht said getting rid of office in this area would be a “big hill to climb” since there is not much office space but a lot of retail and multi-family. Frantz responded by saying that, while that is true, age-restricted housing in Cary is needed. The plan then went to the Planning and Zoning Board for their recommendation.

Planning and Zoning Board Changes

Speaking of the Planning and Zoning Board, the town code related to the board itself was up for discussion as recommendations from a meeting earlier this year dealt with the best way to integrate the board into the new Cary Community Plan. Four amendments were proposed:

There was one speaker at this Public Hearing, though he did not comment on these amendments but the board itself. He said he had recently been to one of their meetings and was “appalled,” saying members did not discuss items relevant to rezoning, members would give opinions one way and then vote the other and he criticized Evangelista for not keeping board members on track.

Town Council seemed generally supportive of these four items, although Weinbrecht said he was unclear on how the criteria board members would be voting on would be different than voting based on town staff’s own recommendations. Mayor Pro Tem Lori Bush was particularly supportive of the item putting those Public Hearings in front of Town Council.

“People should get their five minutes in front of the people they elected,” Bush said.

This Public Hearing on the FY2019 recommended budget allowed comment from residents on what ought to be included. Before the public comments, Cary’s Chief Financial Officer Karen Mills gave an overview of the budget. There are no changes to Cary taxes, but sanitation fees are raised by $1 per month because of the change in recycling prices and the vehicle license fee is raised to $30.

Most speakers were with organizations that received funding through the budget and thanked the Town Council. Those included Advocates for Health in Action, InterAct of Wake County, Concert Singers of Cary and the Poe Center for Health Education.

There were also two speakers who asked for more protection of trees and forests included in the budget, a resident who said the Kildaire Farm Road widening negatively impacted his neighborhood trail and wants their footbridge replaced and a representative with Community Initiatives of North Carolina who asked for consideration of their work on mental illness and guns in schools.

The budget will be up for a vote in a future Town Council meeting.

The remaining Public Hearings on the agenda were primarily annexations, including the annexation of the 82 acres along Green Level West Road and Pine Rail Lane. Its rezoning was up for a Public Hearing at a previous meeting and that is now being considered by the Planning and Zoning Board. 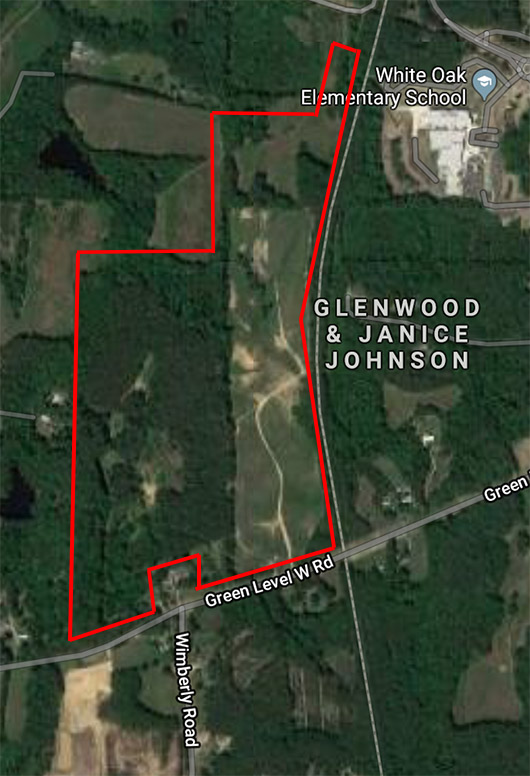 The approximate location of the proposed rezoning and annexation

One speaker came, who has her property in the bottom piece by Wimberly Road not included in the annexation. She was concerned that her house would be surrounded on all sides by Cary and Apex, while she remains a Wake County property. She also spoke about the possibility of Wimberly Road extending and running through her property.

There were also Public Hearings for two annexations on Waldo Rood Boulevard as land for a kennel and an annexation of land along NC-55 for use by Rex Hospital. The Waldo Rood annexation will be voted on at a future meeting while Town Council voted unanimously for the NC-55 annexation. There were no speakers on either item.

Also up for a Public Hearing was an amendment to the Village at the Park PDD, located along Green Level Church Road and Kit Creek Road, which is a large area that will include retail, hotels, office and residential space. This amendment would change part of the site to include a left-turn lane on NC-55 onto Kit Creek Road, building heights of 35 feet for non-residential buildings and 60 feet for residential and reducing parking to 1.68 spaces per unit.

There were no speakers but Councilmember Ken George asked for clarification on the building height rules since the town is encouraging vertically integrated building with different uses on different floors.

“We don’t want to make it difficult to mix vertically when it might be appropriate,” George said. Town staff said they would look into how those conditions would apply in that case.

The amendment went to the Planning and Zoning Board for their recommendation.

There were two speakers at Public Speaks Out who were not commenting on Discussion Items on the agenda. One speaker thanked the town for its programs for special needs residents and asked for a permanent center for special needs people, suggesting the current library on Academy Street, which will cease to be a library when the new one is constructed.

Another speaker came representing Gigi’s Playhouse, which works with people with Down Syndrome and gave an update on the organization’s progress as it hits its two-year anniversary.

NC Courage Eat First Loss of the Season at Home
Scroll to top
%d bloggers like this: