Cary, NC – A few weeks ago Fedex and Volvo made a splash here sharing their partnership and testing of trucks using Autonomous Driving. When I visited the launch, I was thrilled to see them in action and learn more about this exciting technology. 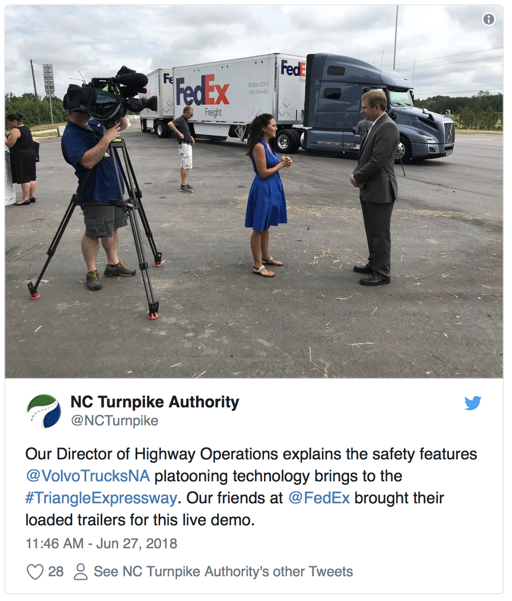 Town staff and I got a chance to get in the trucks, talk to the engineers, but not much more. So when they offered us another opportunity to get up close and personal, I jumped at the chance. 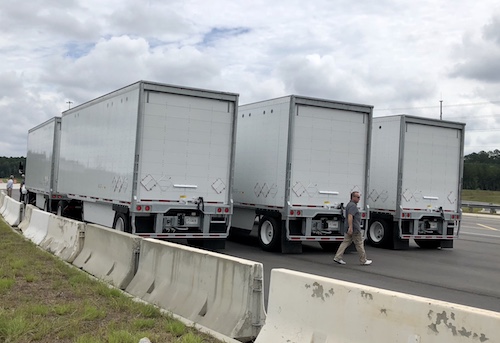 Volvo Trucks ready for the trip 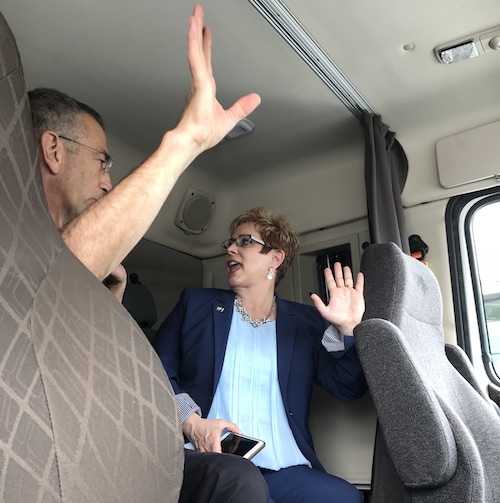 That’s when trucking rocked my world.

There, I said it.

Who thought I could really get psyched about an 18-wheeler?

First, a clarification. When folks talk about autonomous driving, we sometimes think of driverless cars, and that’s certainly part of the definition.  But we are a long way way from that.  The evolution of this automotive technology has great promise,  an ability to improve safety for all drivers, reduce gas consumption and reduce traffic congestion.  I do believe that it will someday be a reality.

In the world of autonomous driving, there are 6 levels (0-5) used to describe the capabilities.

The levels start from 0 – meaning the driver is totally in control with no automation and no assistance from any technological device, to full automation, when the driver can take over, but is not needed.  There are cars today that have a number of improvements – Tesla’s autopilot mode, for instance, is often cited as being at Level 2 (some say Level 3). Level 2 is called Partial Automation”  where the vehicle is controlling the steering and speed without the need for driver interaction for short periods of time, meaning under a minute or shorter. These are the kinds of cars that will have “lane keeping” (staying in your lane) and will brake for the driver when they get too close to the car in front.  The car can react quickly, often quicker than you, but the driver is STILL NECESSARY and needs to be paying attention to the road and surroundings.

The levels go up from there, meaning more automation, less need for the driver to intervene – where the systems in the vehicle will continue to assess the situation and alert you if and when it needs assistance.

The technology for the trucking industry I saw was called “platooning.”  It’s similar in concept to the idea of a platoon in sports – where players can substitute and play in a rotation at the same position.  The idea, in trucking though, is when a number of trucks, that have highly integrated and state-of-the-art driving systems that are all talking to each other so that they can follow each other closely down the road.  This is what they call a “platoon.” Each of these trucks is communicating through an integrated computerized system with information about their location, the distance between them, understanding who is the lead truck and ensuring their speed, distance apart (longitudinal) and systems are all working. 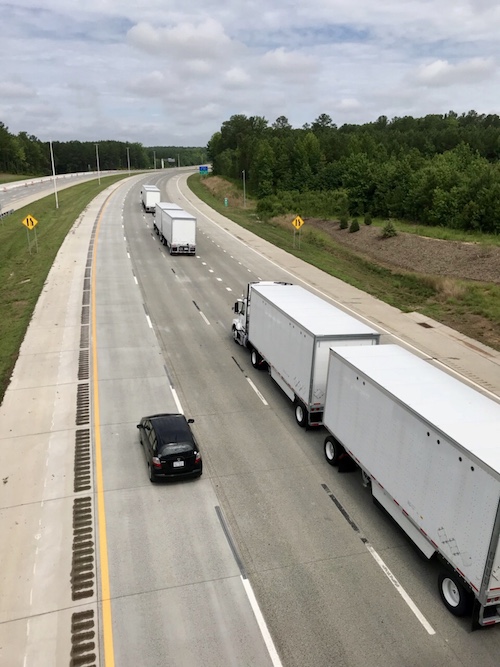 The Cooperative Adaptive Cruise Control, a wireless vehicle-to-vehicle communication technologyis monitoring any changes and quickly reacting – so that if a car or other vehicle interrupts the platoons, say gets in between the trucks, the system drops out of the platoon between those trucks.  The distance between the trucks was about 100-140 feet, or about 1.5 seconds at 60mph.  These equipped trucks can brake more quickly than a human driver!  Our tour guide/Volvo engineer, George Bitar said that the best way to think about it, is to think of this technology as “gap management.”  Makes sense. 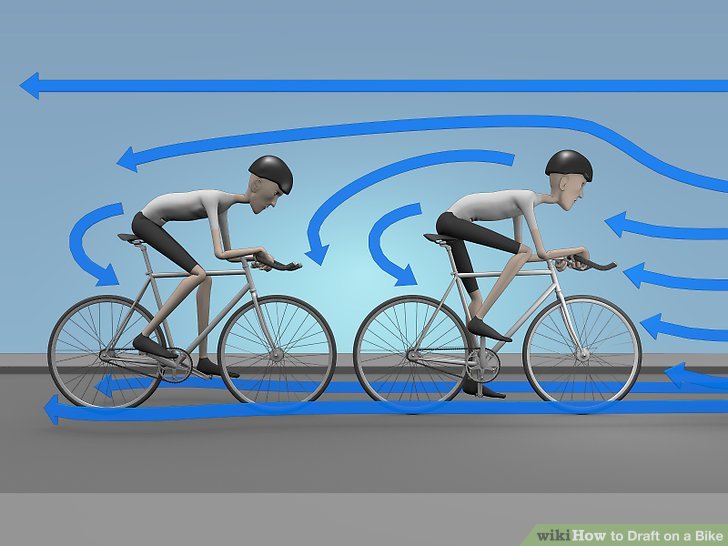 Drafting from Wiki How

The promise of this ability is pretty clear. The monitoring of these changes and quickly reacting can truly improve safety on the road.  It’s also a real cost saver.  Platooning provides the benefits that I see when I cycle – especially when I draft behind another cyclist.  Putting aerodynamics to work, when we ride in a single file, I get to take advantage of the slipstream that is created by the front rider.  That means when I’m the back rider, I save a ton of energy and can leverage that to ride longer.  This same formation works for trucks.  The energy (or gas savings) is not only realized by the back trucks, but the front vehicle also benefits, with increased savings.  Besides the safety and cost savings, the belief is that these systems will also reduce traffic congestion, as well.

So, how did this work?

After jumping into the truck, we got a detailed overview of all of the sophisticated equipment in the vehicles.  These were standard Volvo AB trucks fitted with special equipment, with two white and unmarked 28 foot Fedex trailers. They also have full payloads so that the tests truly simulate real road conditions.  These trucks have it all, from radios, sensors, radar, to video cameras and special communications equipment.  Everything is measured and all communications wireless.  There are also drivers in the vehicles to not only steer, but to be able to take over the system at anytime.  The drivers are steering but the computer systems are braking and accelerating. 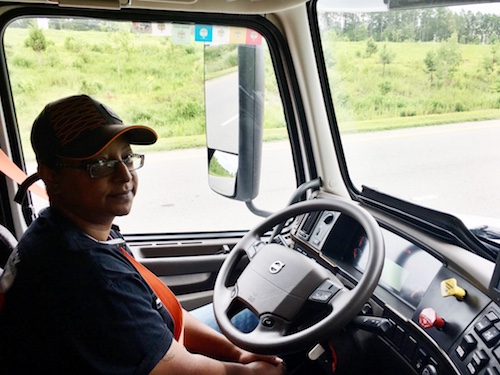 After some questions from Mayor TJ Cawley and I, we took off.  As we were driving about 60 mph down 540 (more on that later), an “interloper” (an SUV with an Volvo employee inside) breaks into the platoon formation, crossing into our lane between the first and 2nd truck.  We watch as the first two vehicles break out of their platoon, but the second two vehicles stay in formation, slow down automatically and keep their distance (gap) between the vehicles to then form their own platoon. When the “interloper” leaves the lane, the trucks automatically return to the formation of the three truck platoon, with the lead truck resuming as front vehicle and the others accelerating to match speed.  All automatic.  Our driver never stepped on the brake or accelerator.  SO COOL!

Platooning on 540 from Lori Bush on Vimeo.

Why Platooning and Why Here

The 18 mile stretch of NC 540 from the exit at Veridea Parkway north to Cary is one of just 10 locations in the US that the US Department of Transportation has designated for demonstrating advanced vehicle technologies. The Turnpike Authority is also heavily involved, and this research and activity is heavily monitored by all parties.  And yes, because they are on the Turnpike, they are paying tolls, just like the rest of us.

Fedex is a partner of Volvo for this technology initiative –and they certainly have a vested interest. With over 60,000 vehicles delivering over 8M global packages daily, their goal is to improve safety, reduce traffic congestion and save money.

Fedex has said that drag accounts for up to 25% of a vehicles energy consumption – and the numbers I heard were energy savings of 4-10% in gas savings equating to millions of dollars.  The closer the trucks, the more trucks in the platoon, the higher the savings.  The goal of safety is still first and paramount.

Also, Volvo’s North American headquarters is in Greensboro and the proximity of this testing location is great for them as well. 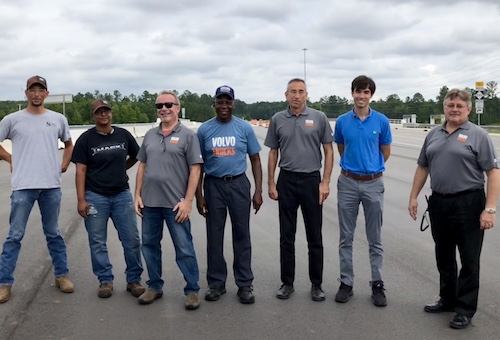 These tests are only being run when the conditions on the road are safe.  In fact, drivers (including us) aren’t supposed to be using cruise control or other technology measures when it’s raining or there are pools of water on the road. Our trained and professional driver, Cindy shared her excitement about the promise of this technology and the ability to improve the safety of the vehicles.

Overall, it was a really great experience.  I learned so much about the technology, the promise of improved safety and the passion of all the folks involved. And, who doesn’t love to ride in an 18-wheeler? 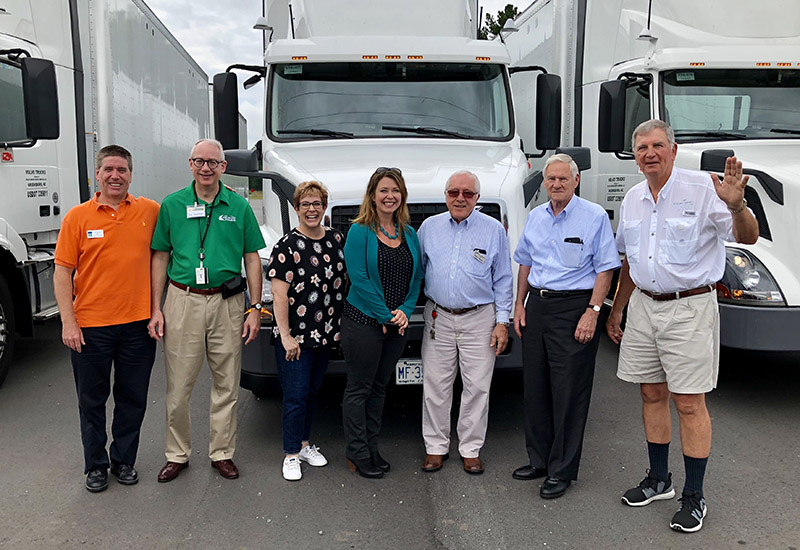 All the Platoon Riders from across the Triangle