Cary, NC – There’s something special about two North Carolina teams competing and this past Saturday’s game was certainly special as North Carolina FC racked up a huge six points against the Charlotte Independence.

North Carolina FC took on the Charlotte Independence on Saturday, August 25, 2018 at Sahlen’s Stadium at WakeMed Soccer Park. The home team had beaten Charlotte once before and the crowds were excited to see if they could get a repeat. But in just the fifteenth minute, Charlotte took the lead as Kevan George got in a header.

But shortly after, Zach Steinberger responded with a header. That header was deflected but Steinberger caught the ball back and with a scissor kick, brought the score up to 1-1. Steinberger was on fire for the rest of the match and ended up being a deciding factor, coming back after his season-long loan to the Indy Eleven.

After halftime, Steinberger continued his charge, getting an assist from Wuilito Fernandes to Steven Miller, with Miller finishing the job with a scoring goal. Two minutes later, Miller repaid Steinberger and passed the ball to him near the net. Steinberger leapt into the air, hit a header and scored on Charlotte goalkeeper Andrew Dykstra. Already, the score was 3-1 in NCFC’s favor.

The action didn’t stop there. Austin da Luz got a nice goal in the 69th minute as he had a clear shot at the goal from the 18-yard line. da Luz kicked it hard and it sailed into the opponent’s goal.

Steinberger was not the only prolific scorer this match as Daniel Rios got a free kick in the 72nd minute and then, six minutes later, got a cross from Miller and hit the ball in at close range. Then, in the 85th minute, the Independence’s Jake Areman got one more goal but it was not enough to overcome NCFC’s commanding lead and the game ended 6-2.

“We played really well, and then we just kept the momentum going from there. To be in a game where we score six goals on my first game playing for the club, you know, it’s a dream start,” Steinberger said. “Hopefully we can use this as a catalyst to carry that momentum and push right into the playoffs.” 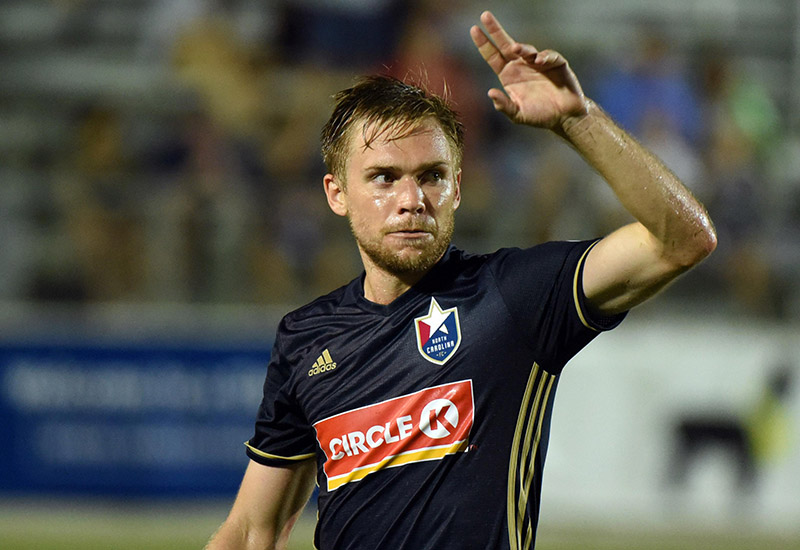 With this win, NCFC is the top team in the Southern Derby and is up to 10th place in their USL group.

“We came in at halftime and we just talked about doing things simply and moving the ball quickly and as efficient as possible,” NCFC coach Colin Clarke said. “And we knew we would create chances, and we created plenty. So full credit to the boys.”

This match was also the most goals the team has scored in a league match since they were the Carolina RailHawks in a 2009 game against Miami FC, where they scored nine goals.

Their next game is against the Tampa Bay Rowdies on Saturday, September 1, 2018 at 7 PM.