Cary, NC – Right before Hurricane Florence hit, Cary residents saw long lines of cars waiting to stock up on gasoline. But now that the hurricane has passed, fuel supplies and prices look stable despite the historic rainfall.

Despite Hurricane Florence dropping more than eight trillion gallons of rain on North Carolina – the wettest hurricane in state history – Triangle gas prices are almost identical to where they were a month ago: $2.68 per gallon. Compare this to last year’s winter storms and Hurricane Harvey, which led to price increases of more than 10 cents for weeks after the storms hit and passed.

There are a few factors to explain why. For one, Cary was not impacted nearly as much as other coastal towns and cities. In Wilmington, average gas prices are up nearly three cents since last week. But even for a town that was battered by Hurricane Florence as much as Wilmington was, this is still a relatively small increase in gas prices compared to past storms.

A larger factor seems to be the hurricane’s impact on the fuel supply itself. Recent hurricanes that led to significant gasoline price spikes hit the Gulf of Mexico, which has a number of different refineries. North Carolina mainly has pipelines and terminals (Wilmington has one of these terminals) which were not significantly disrupted by Hurricane Florence.

While gas prices are stable currently, as new supplies are delivered across the state, Hurricane Florence’s aftermath may make that side of transportation difficult.

“Gasoline stocks in the hurricane-impacted area are healthy, but delivery of gasoline will be an impediment to meeting demand in coastal areas this week,” said Jeanette Casselano, AAA spokesperson. “As power is restored, water recedes and roads open-up, we will have a better idea of how quickly fuel deliveries can be made to gas stations in the area.”

According to reports by the fuel analysis site GasBuddy, 20 percent of North Carolina gas stations did not have any supplies at the start of this week. 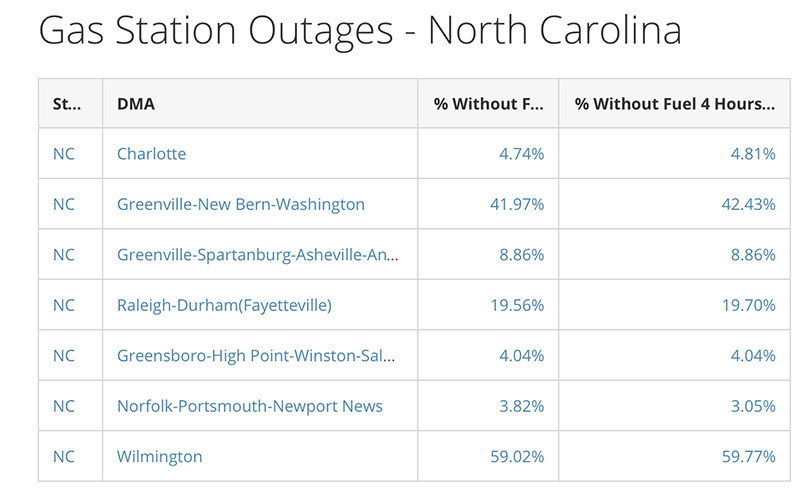 North Carolina Attorney General Josh Stein said on Monday his office had received around 500 complaints about price gouging not just on gasoline but also on water.

“If you are seeing price gouging by retailers or by construction companies or by anyone who is out there providing a good or service, let my office know,” Stein said (The number to report price gouging is 877-566-7226 and there is also online reporting).

It remains to be seen how gasoline prices will travel all the way to the Triangle and Cary but we will keep this issue monitored. But in the meantime, gas-saving methods such as local bus transportation are still in full effect after Hurricane Florence.

Fall Gardening: The Season of Mums
Scroll to top