Cary, NC – The Carolina Hurricanes almost pulled off a perfect record in the preseason, by losing in overtime to a strong Nashville Predator team 5-4 in overtime in front of a great crowd at the PNC Arena on Sunday, September 30, 2018. The Caniac Carnival took place before the game that appeared to have a record crowd. Earlier in the day the coaching staff made the final cuts sending eight players down to Charlotte while keeping four rookies on the team.

The Canes beat the Preds earlier in the week in Nashville when both squads had about a third of the rosters filled with prospects. The Preds are coached by Peter Laviolette who was the coach of the Canes when they won the Stanley Cup and current coach Rod Brind’Amour was the captain. The Preds came out with the faster jump in this game and were using their size and skill that initially seem to set the Canes back on their heels. Ryan Johansen scored first when a puck jumped over Justin Faulk’s stick right to Johansen’s, who when uncovered will bury the puck every time.

The Canes have been behind in the scoring only 90 seconds all preseason and never to start a game. Jordan Staal made a power move along the near boards then made a quick wrist pass to captain Justin Williams camped out just outside the top of the crease. Willie snagged the puck then made a pretty lift over Pekka Rinne’s right shoulder to tie the game. The game was free flowing for the bulk of the middle of the period with rushes up and down the ice with the Preds getting off far more shots than the Canes.

The Preds struck again at the 15:36 mark but just 20 seconds later, after a good dig by rookie Warren Foegele, Sebastian Aho slipped one under Rinne’s stick to again tie the game. The goal was officially unassisted but without Foegele’s hard work down low there was no opportunity.

There probably wasn’t a Cane player that wanted to go into the locker room after the period as they took five penalties in the period which means they essentially played half the period a man down. That will send any coach into orbit. The Caniacs decided to hone in on P.K. Subban, who took three penalties during the game, and booed every time he touched the puck. There has to be some respect there as Subban is one of the league’s best players, is a great ambassador for the game and donates so much of his money to worthy charities, such as $10 million to a children’s hospital. He’ll take a boo on the road any day with a wide smile. There’s not a team in the NHL that wouldn’t want Subban on their team.

Despite all the penalties, the Preds were only able to score just one powerplay goal. Bad news is, starting goalie Scott Darling left the game in the middle of the period with an undisclosed lower body injury. Hopefully he’ll be ready for the home opener Thursday night. 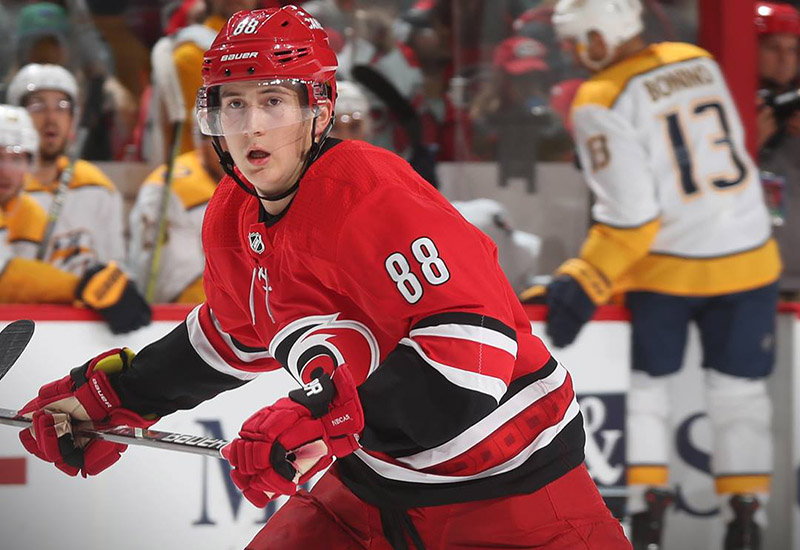 Calvin de Haan Scores His First Goal as a Cane

Calvin de Haan, signed as a free agent during the offseason, looked like he’s back to 100 percent as he scored a great looking goal at the 2:28 mark of the third period. de Haan last played in January as he had a shoulder injury that took surgery and a long recovery period. Signing him was another coup for GM Don Waddell and made the already strong defense that much stronger.

Less than a minute later, Craig Smith scored his second power play goal of the game to once again put the Preds up by one. The Canes had many chances as the Preds started to get less disciplined and took five penalties in the period with the Canes having a 5-on-3 for a short time.

Late in the period, Martin Necas tied the game with a powerplay goal. Jaccob Slavin passed the puck over to Andrei Svechnikov in the high slot. Svechnikov passed over to fellow rookie Necas who got about 80 percent on a slap shot. The shot was initially touched by a defenseman then trickled under Juuse Saros’s right pad. The Canes again started Slavin, Aho and Teuvo Teravainen in the overtime hoping for the same result as the previous game against Washington when Aho scored in 19 seconds.

Unfortunately, the Preds won the faceoff, controlled the puck and did a nice job on dropping passes off to retain the possession. After a series of cycling up high, Johansen went across the high slot and sent a hard shot to Petr Mrazek’s left to win the game with just 21 seconds gone. The Canes ended the preseason with a very impressive record of 5-0-1 and 11 out of a possible 12 points.

First game is this Thursday, October 4, 2018 at 7 PM against the NY Islanders. Be there!