Chapel Hill, NC – The weather was mild and the crowds revved on Friday, September 28, 2018 night for the opening of the NBA Pre-Season featuring the Charlotte Hornets against the Boston Celtics at the Dean Smith Center. The stars came out to shine including Kemba Walker and newest Hornet Tony Parker as well as Kyrie Irving, Gordon Hayward and all the Celtics. Even Roy Williams showed up for the fun.

Spotlight on the Celtics

With the departure of LeBron James for the Lakers, the East looks like a scramble between the Celtics, new-look Toronto Raptors featuring Kawhi Leonard and the up-and-coming Philadelphia Sixers.

Right now, the C’s look like the most likely contenders. What we haven’t seen is their full arsenal in action – Gordon Hayward got injured in the first game of last season and Kyrie Irving  was injured at the end of the post-season. But on paper (and on the court), Boston is loaded with Al Horford at power forward and Jayson Tatum and Jaylen Brown on the wings.

The Celtics also have bench-depth with Terry Rozier, Marcus Morris, Aron Baynes and Marcus Smart coming off the pine.

In short, this was a chance to finally see all the Celtics together on the court. 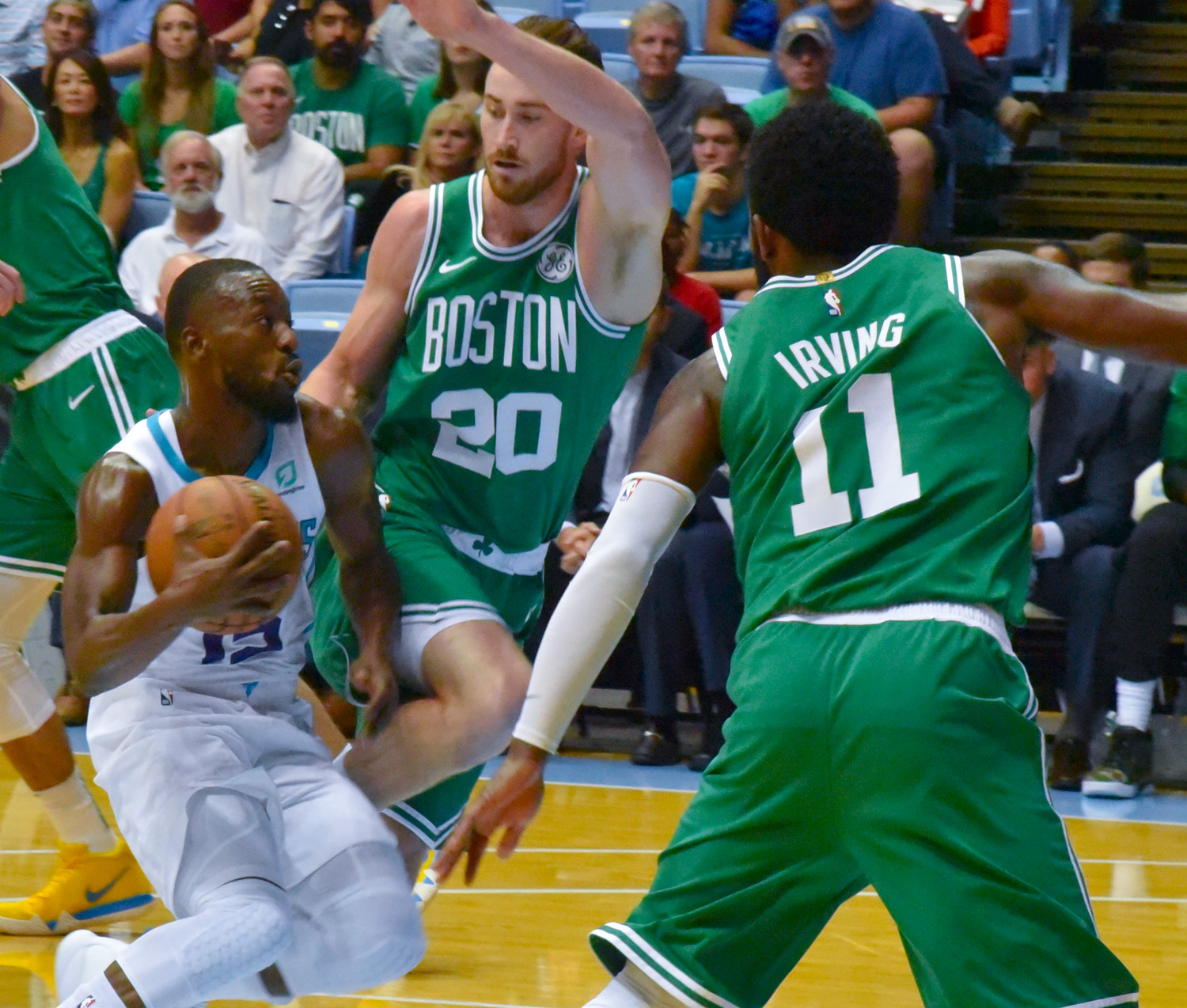 Spotlight on the Hornets

The Charlotte Hornets finished 10th in the East last season. They did not qualify for the Playoffs.

The team didn’t make any major off-season moves, but did make a couple of notable trades. Top of the list: shipping Dwight Howard off to Washington. This will be Howard’s third team in three years.

On the plus side, the Hive picked up future Hall of Famer Tony Parker from the Spurs. More on that later. 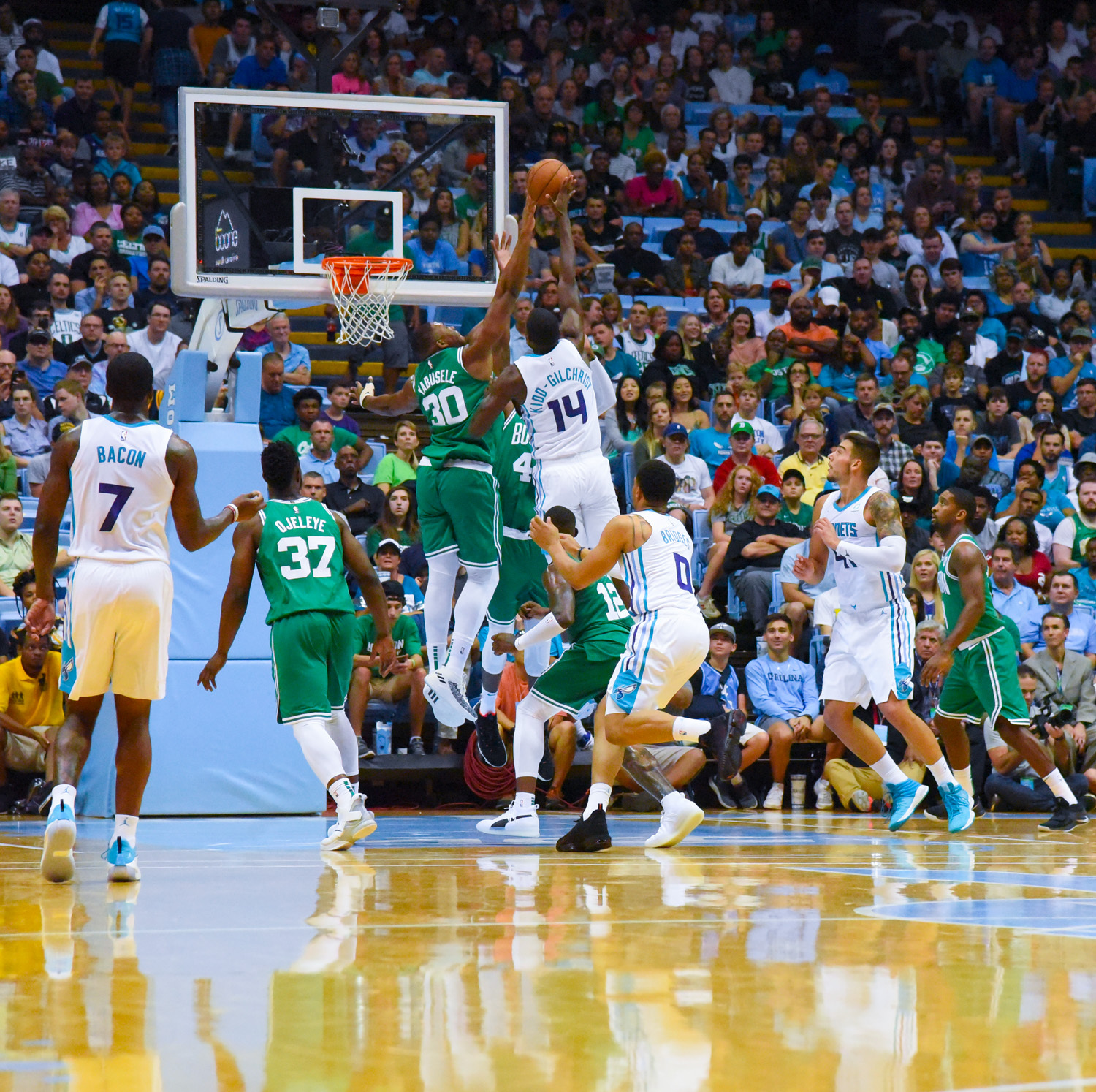 Probably most of the excitement on Friday night was seeing Hayward in a Celtics uni. When Kyrie Irving demanded a trade from LBJ’s Cavaliers, the Celtics promised him another All-Star on the squad and traded for Gordon Hayward, a big body who is also a knock down shooter. Very unfortunately, Hayward was injured in the first game of last season, so we’ve never really seen the Irving-Hayward combo in action.

Hayward seemed excited to be on the court, even if it was a pre-season game. He played with energy, knocking down a three in the first half. 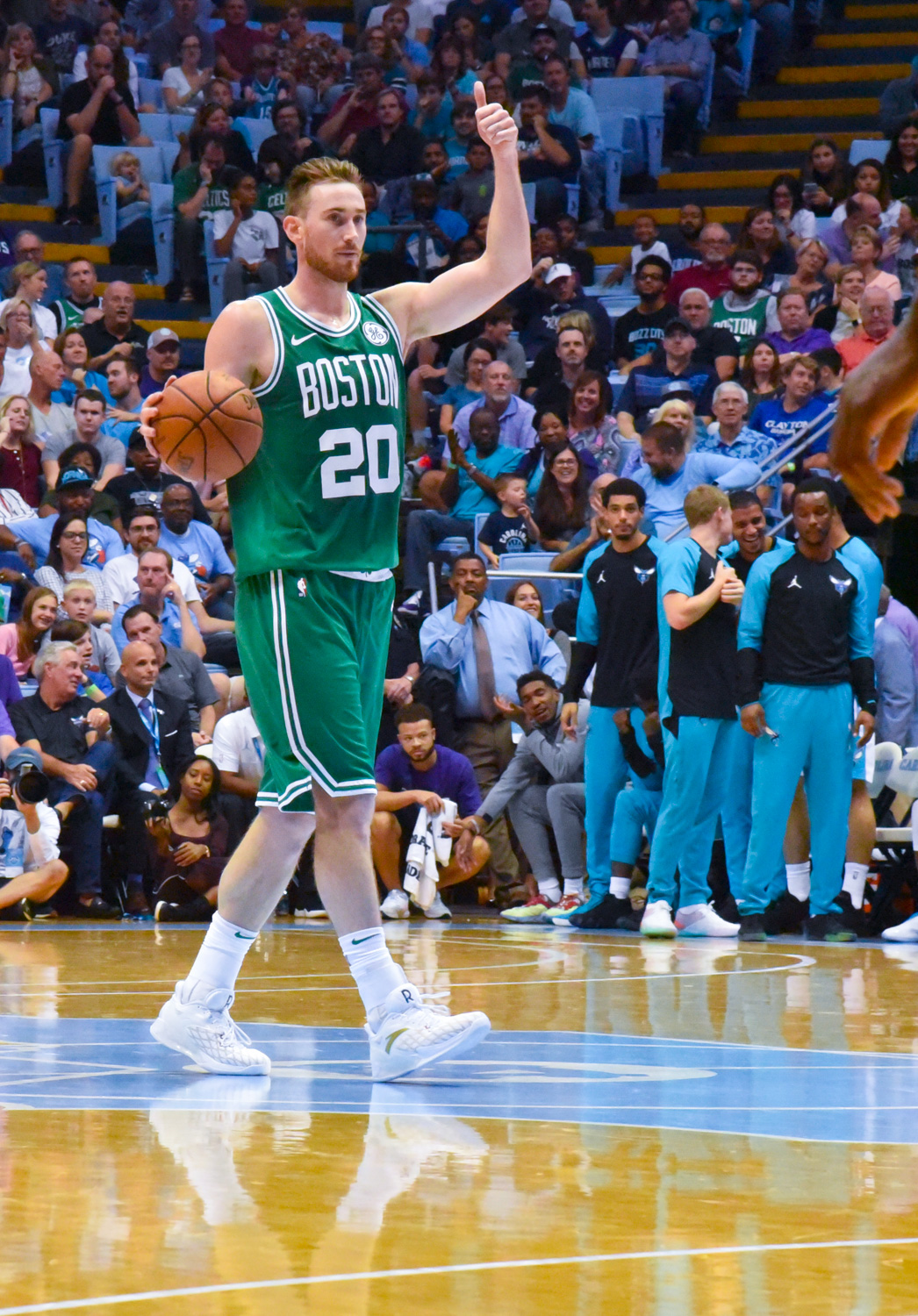 Another intriguing element was the appearance of Tony Parker in a Hornets uniform. Parker, a four-time NBA champion, comes to Charlotte after a 17-year stint with the San Antonio Spurs. He is a six-time All-Star and 2007 Finals MVP. Parker grew up in France and played on the French national team in addition to his time with the Spurs.

Parker, at 36 years of age, can’t carry a team for 40 minutes a game anymore. But he took over for an extended sequence in the beginning of the third quarter and showed he’s still got the speed and the savvy to take Celtics young bloods off the dribble and into the paint.

I think he is a good pickup for the Hornets. 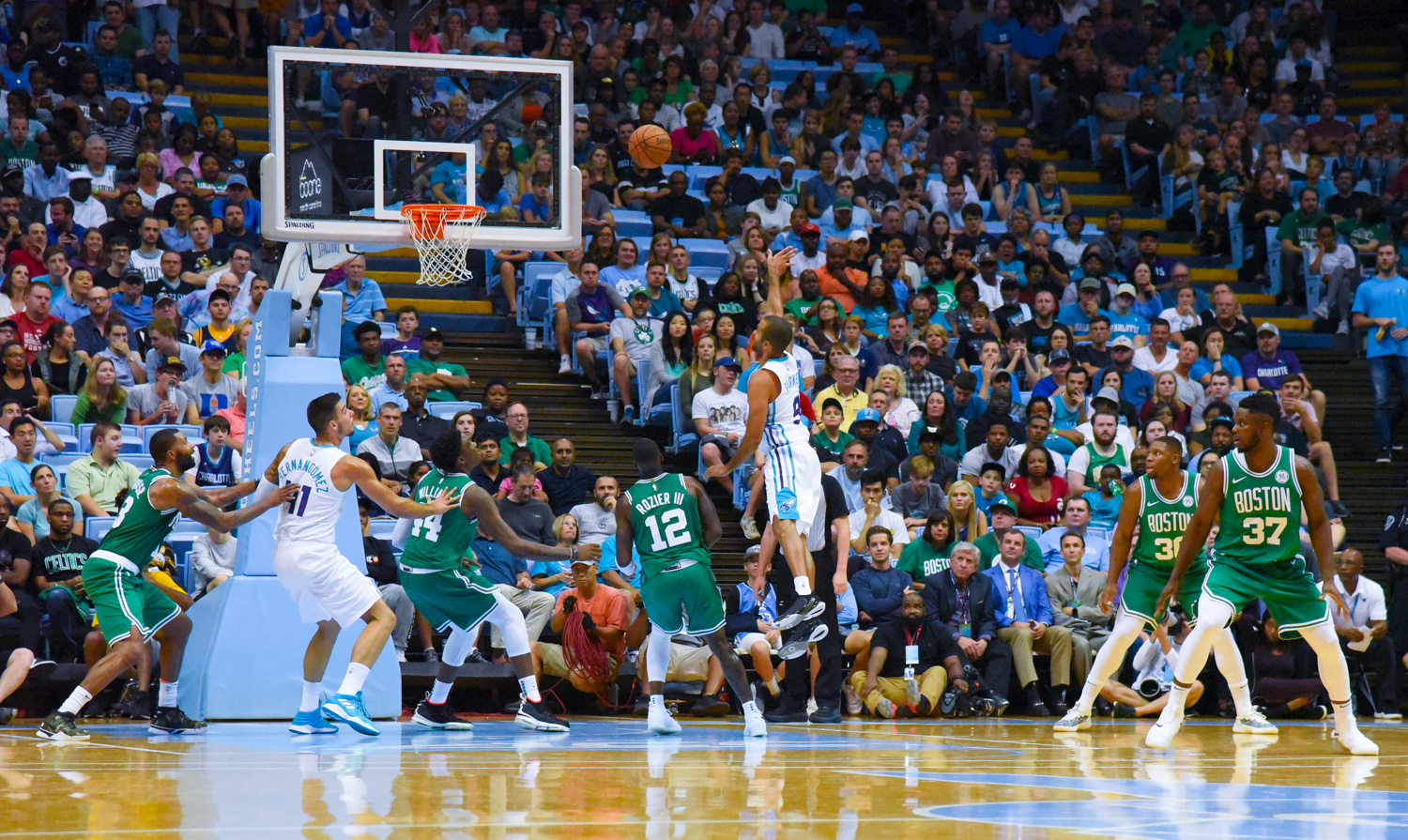 Tony Parker, still crafty after all these years, getting some air against the Celtics. 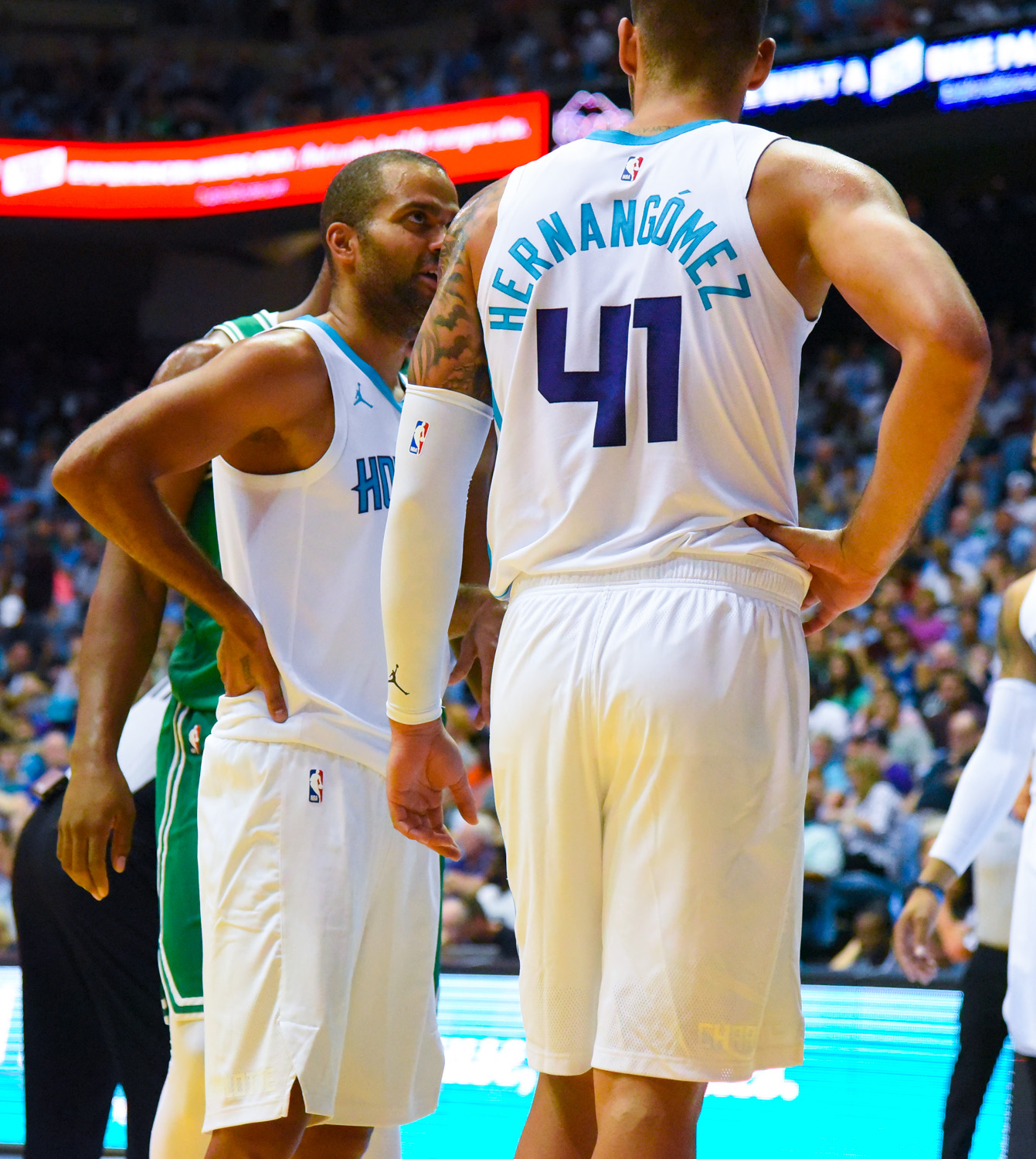 Another good pickup for the Hornets is Willy Hernangomez. Arguably, Hernangomez was one of the only consistent bright spots on the Knicks last year (excepting Porzingis). He’s tall, he can jump and he’s a hustle player. 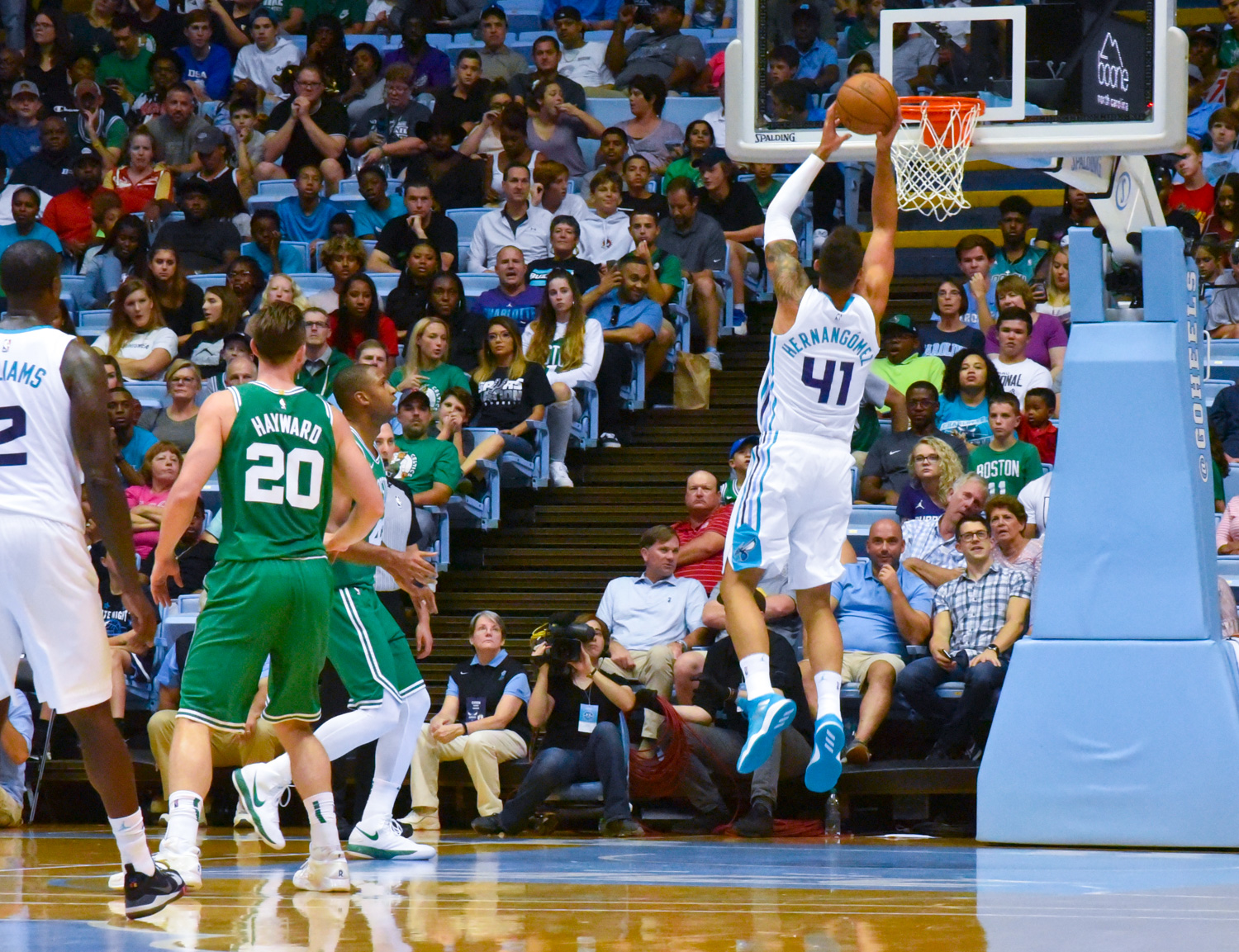 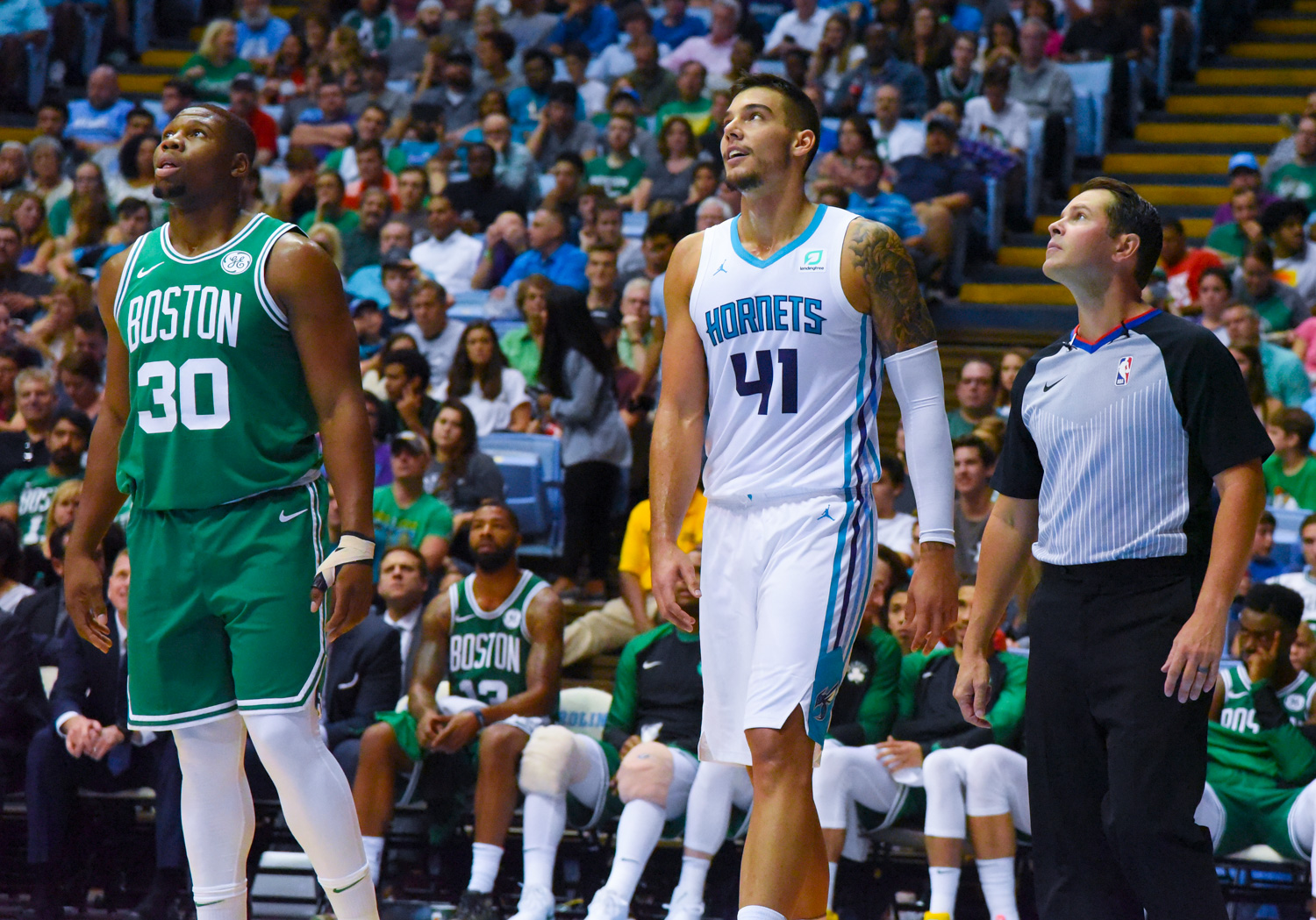