Cary, NC – Even after several items on the agenda were tabled before the meeting started on September 27, 2018  the Cary Town Council still had a busy agenda. There was a lot of discussion during the Public Hearing on rezoning land for townhomes, a vote on part of the Village at the Park district and more.

Village at the Park

Four of the five Discussion Items were tabled at the start of the meeting on September 27 at the request of their respective developers so that only left one Discussion Item: amending the zoning for part of the Village at the Park Planned Development District. This whole site is in between NC-55 and Green Level Church Road, adjacent to Alston Ridge Elementary School. 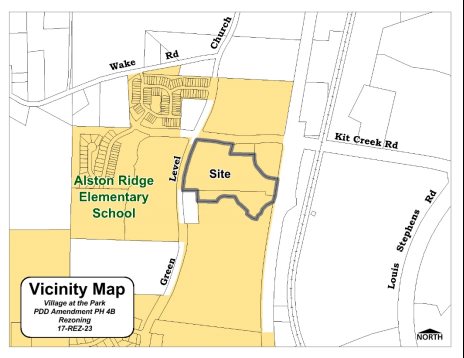 The section of the Village at the Park PDD being amended

The Planning and Zoning Board voted 7-2 in favor of the proposal. The two “no” votes, according to Board Chair Mark Evangelista, were due to the members feeling the existing zoning works well and wanted to keep the balance of more office space, as well as concerns about having so many residential areas next to a school.

The Town Council had some concerns about a sidewalk gap on the plan but they also said it may be addressed before construction starts in the coming years. Town Council voted unanimously for the amendment.

Of the three Public Hearings on the agenda, the one that had the most public comment was a proposal to rezone 36.42 acres around Roberts Road and Page Road to Transitional Residential Conditional Use for townhomes and neighborhood recreation only, with a density of 3.5 units per acre – although as Cary Mayor Harold Weinbrecht put it, because part of the land cannot be developed due to stream buffers, it would effectively be six units per acre.

This land is also currently part of Apex and would need to be annexed as well as rezoned.

There would be a 50 foot buffer around the property with open space in the center larger than what the ordinance calls for. There are also conditions limiting building length as well as other aesthetics. A collector road is already planned to run through the top left corner of the property in the future. 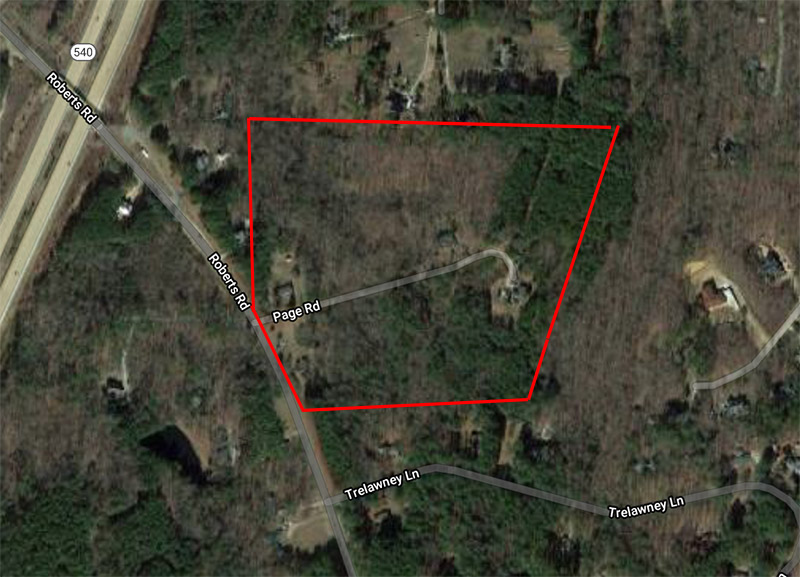 The approximate location of the proposed rezoning and annexation

Five speakers came to the Public Hearing, all in opposition to the proposal and also bringing a petition with other nearby residents opposed to the plan. Concerns primarily dealt with the existing low density and the relative quiet of the area, and how a project of this size would disrupt that. Related to that were fears of increased traffic going through their neighborhoods, increased stormwater runoff and increased pollution, both of the air and of groundwater. Speakers said people in the area rely on well water rather than treated water from Apex or Cary.

Town Council’s comments asked about how traffic could be managed and whether the neighborhood would need to be connected to other roads in the area, while Weinbrecht talked about the town’s requirements for pollution and stormwater retention.

Councilmember At-Large Ed Yerha talked about this plan specifically in the context of the Cary Community Plan.

“The Cary Community Plan labels this as a traditional neighborhood with townhomes allowed in pockets,” Yerha said. “This doesn’t fit my definition of a pocket.”

The plan then went to the Planning and Zoning Board for their recommendation.

Another Public Hearing on the agenda was expanding the Triangle Aquatic Center, adjacent to Cary Towne Center. The current zoning for the center’s land allows for an additional 70,000 square feet but their plans call for 100,000 square feet for a building with indoor and outdoor facilities as well as more parking. The proposal would also reduce the surrounding buffer from 65 feet to 50 feet.

The applicants talked about the history of the Triangle Aquatic Center and said they need this expansion because they are currently at capacity.

There was one speaker at the meeting who said he was speaking on behalf of surrounding neighbors. He asked for consideration of the loss of green space and the smaller buffer, as well as damage to property values and stormwater runoff.

The proposal was sent to the Planning and Zoning Board for their recommendation.

The only other Public Hearing on the agenda was for annexing 0.92 acres on Mullens Drive. This saw no speakers or council discussion and they voted in favor of the annexation unanimously.

Two of the speakers at Public Speaks Out were talking about Discussion Items tabled at the start of the meeting. One was a nearby resident of the proposed hotel rezoning on N Harrison Avenue. He asked that the vote not be delayed much longer and that the next time it is on the agenda, Town Council votes on it.

Another speaker was the developer for one of the Discussion Items’ proposed rezonings. While he did not specify the proposal by name, it appeared to be items 6.4 and 6.5, rezoning land in West Cary by Pine Rail Lane. He said the land is difficult to develop and said he was unsure what the Town Council was looking for when town policies called for residential land developed here to keep a rural character.

The only other Public Speaks Out Speaker was a representative from the Downtown Cary Farmers Market, talking about new personnel there, the market’s 501(c)(3) status and tomorrow’s Farmers Fall Festival at the Ivey-Ellington House in Downtown Cary. He also asked for consideration for space in Phase 2 of the Downtown Park.

At this meeting Councilmember Jennifer Robinson and Mayor Pro Tem Lori Bush were honored by the League of Women Voters.

NBA Report: Hornets vs Celtics at the Dean Dome
Scroll to top