Cary, NC – As the season winds down, North Carolina FC got an exciting win at home, coming back from a 2-1 deficit to defeat their opponents.

Come From Behind Win

The Saturday, September 29, 2018 game at Sahlen’s Stadium at WakeMed Soccer Park had a promising start as North Carolina FC played fast, as usual, against their opponents, the Richmond Kickers. But things shifted in the 30th minute as Richmond’s Prince Agyemang scored the first goal of the match.

Kyle Bekker, who had a noteworthy performance this game, tried to tie the game up five minutes later and was rebuffed. Not long after, Bekker’s constant attack paid off as a kick from Zach Steinberger went to his position. Bekker took the shot and got NCFC up to 1-1.

Unfortunately, the lead would not last much longer as Richmond’s Heviel Cordoves scored a goal in the 44th minute with a strong kick. Going into halftime, NCFC was down and would need to play effective offense in the second half to win.

But that is exactly what they did. Austin da Luz got close enough to the goal in the 61st minute that a header made it in and tied the game up. The header was hit off of a pass from Bekker. And then Bekker got another point on the board with a huge kick from past the 18-yard line in the 73rd minute.

Now that NCFC had the lead, the game continued at pace, with NCFC’s Alex Tambakis preventing any more goals by Richmond and made two saves. In the end, NCFC won the game, 3-2. 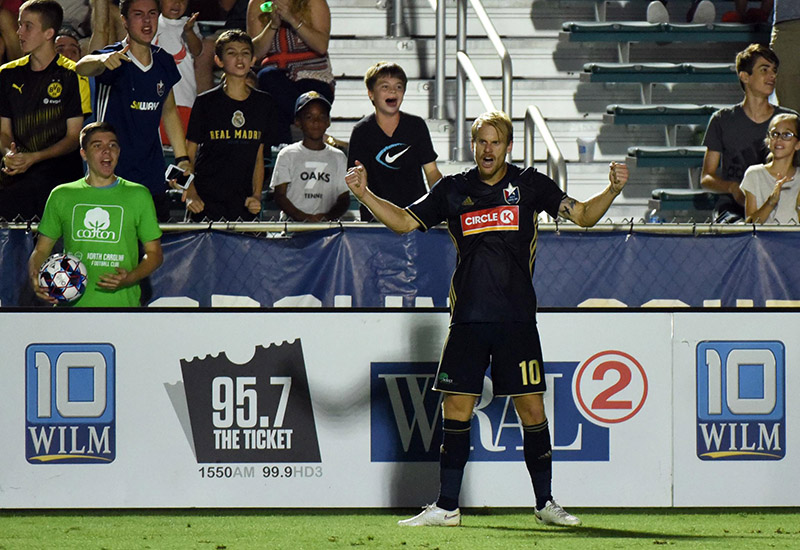 With this win coming near the end of the season, NCFC Head Coach Colin Clarke acknowledged how important this victory and the three points that come with it are.

“We made it difficult for ourselves, but the response second half was superb,” Clarke said. “Down 2-1, and you’re sitting there, as we talked in the locker room, the season’s on the line right here. And I thought the response was superb.”

Also noteworthy in this game was Bekker’s strong performance and Bekker himself said how important these last season games are.

“Every game now for the rest of the year… until we get into the playoffs, every game is a final,” Bekker said.

Bekker currently has the record for the second-most assists in the Eastern Conference.

NCFC’s final home game of the season is against the New York Red Bulls II on Saturday, October 6, 2018 at 7 PM.