Cary, NC – It was an emotional night for many of the current Canes and all of the Caniacs as Cam Ward made his first trip into the PNC Arena as a member of a visiting team. During the first TV timeout, there was a classy video on the Jumbotron about Ward’s 13-year career with the Hurricanes that had a great response by all in attendance including both teams, the refs and even folks on press row.

When it was over, Ward waved to the crowd showing his appreciation and respect. The game, ironically, turned out to be a duel of the goalkeepers as both were on their A games with Scott Darling having his best game yet as a Cane. The Canes won 3-2 in overtime but Darling couldn’t be faulted for either of the Hawks’ goals. 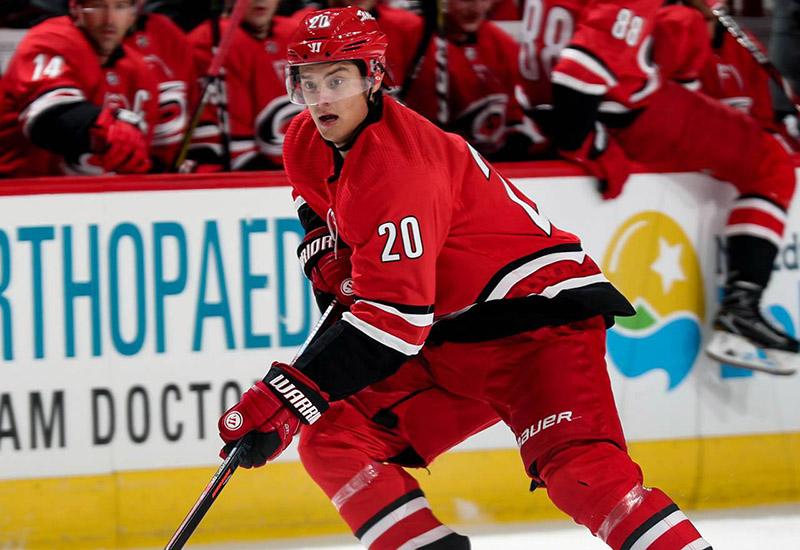 Canes Slow Out of the Gate

Chicago had the early jump as they are in a desperate situation; they fired their coach of 10 years last week and haven’t won a game under the new coach. The Canes beat the Hawks last week in Chicago in the first game under new coach, 33-year-old Jeremy Colliton, which was the first and only time the Canes have been out shot all year. That game had its moments as the Canes jumped to a 4-0 lead and held on for 4-3 win.

The Blackhawks had the extra step on the Canes out of the gate, getting off five shots before the Canes managed their first. Just under midway in the period, on what had to be a miscommunication somewhere, Jonathan Toews carried the puck into the Canes end, passing up to Patrick Kane lingering in the right point. Henri Jokiharju just came onto the ice and made a rush to the left point. Kane fed Jokiharju while in full stride for a hard slap shot as there wasn’t a Cane defender within eight feet.

After passing off to Kane earlier, Toews, being the great player he is, went right to the net and stood in front of Darling. The unbeknownst breakdown of the Canes’ defense left Toews all alone and he deflected the puck past Darling for the 1-0 lead. A quick glance to the Canes bench saw Rod Brind’Amour’s eyes light up light a police spotlight. Individually, Michael Ferland, Brock McGinn, Justin Faulk and Jordan Martinook all had excellent play in the first period. Darling made an outstanding save when Toews and Kane came down on a 2-on-1 with Kane taking a slapshot that Darling caught causing the Caniacs to start to get into the game.

The second period tempo was markedly slower than the first as both team were playing very conservatively. The Canes forechecking was not up to Brind’Amour standards nor were the Canes finishing checks. Faulk’s excellent play from the first continued into the second as he was jumping in on rushes or even carrying the puck over the blue line and around the Hawks forwards to take a shot on his old teammate Wardo.

On one rush, after Faulk let a shot fly, it was Wardo’s good friend Justin Williams trying to jam the puck under the pads. Too bad either wasn’t mic’d up to hear the comments flying about. On the next Canes opportunity, it was another good friend Jordan Staal sliding from behind the net going backhand to a forehand jam that Ward also stopped and flashed a big grin as he handed the puck to the linesman.

Darling had his second outstanding save of the game on a breakaway by Alex DeBrincat after getting a headman pass. Just over the midway point of the period, after a slow, ineffective clear by the defense, hustle by David Kampf caused a deadly turnover, picked up by Dominik Kahun who made a nice between the legs backhand pass to DeBrincat who sent it past Darling from the mid slot area.

The first penalty of the game came at the 14:04 mark when Brent Seabrook cleared the puck over the glass that Jaccob Slavin called before the officials as sometimes they need help. The Canes wasted no time in converting as Sebastian Aho won the faceoff right to Teuvo Teravainen who blasted a shot from the high slot past Ward with just two seconds gone in the powerplay.

Less than a minute later, the Canes were again on the powerplay due to a slashing call on Jokiharju. The results were the same, this time Andrei Svechnikov muscled possession of the puck down low, got around a defender passing up to Ferland who quick stocked it in to tie the game. Those two goals coming so fast we’re the turning point of the game as the Canes and Caniacs, were taking control. 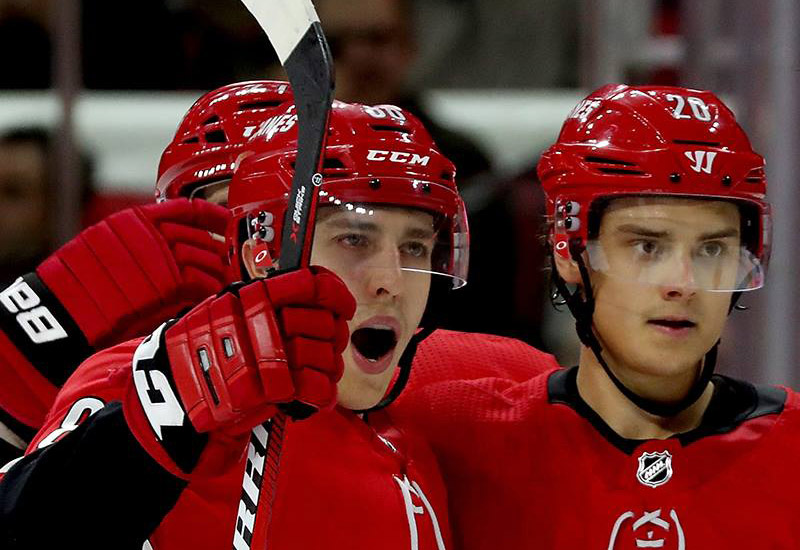 The third period did not have any scoring but was very entertaining. With respect to Ward, the Caniacs wanted him to have a good game but not so good the Blackhawks would win. Darling who was only playing in his fifth game of the season and hasn’t looked real sharp, always plays great against his former team and played fantastic in the third. Both teams were checking very tightly compared to the first two periods as each had game low shots on goal.

Each team had about four good scoring chances but both goalkeepers were playing very well, with each making game-saving saves late in the period sending the game into overtime. Roddy started Slavin, Staal and McGinn in the OT which was an interesting twist. Normally it’s Williams but Roddy must have decided two speedy players is better than one in OT. That trio did well keeping possession most of the time.

The second trio was another twist with Faulk, Svechnikov and Aho. Svechnikov was fighting for the puck in front of the Canes bench when Faulk bodied his way in stealing the puck then passing over to Seabass at the blue line. Seabass skated in with Faulk on his left, they crossed, Seabass held tha puck and waited for Ward to commit then sent one in 5-hole to win it with just 1:16 gone in the OT.

Aho lead the home win celebration that Also was slightly different as the team skated cross ice rather than to a goal end. Great evening all around with the tribute to Cam Ward and a Cane win.

Next game is Saturday, November 17, 2018 against Columbus. Be there!