Cary, NC – Despite being a holiday week it was still a busy with a lot of long nights.

Monday was the observed holiday for Veterans Day so I had no duties or activities.

Tuesday I contacted council members to hear of questions or concerns they may have had about Thursday’s upcoming regularly scheduled council meeting. The main topic of my individual discussions was the proposed hotels on North Harrison. It was my belief after these discussions that the proposal would pass by at least a 4 to 3 vote.

Later Tuesday I met with staff to go over the agenda. We talked about adding more information to the North Harrison hotels staff presentation to help with questions. Our meeting concluded after about 20 minutes. Afterwards I met with the town manager for my weekly one-on-one meeting. We talked about a variety of proposals including the ones on North Harrison, Weston, and Highway 55.

Following the CAMPO meeting I chaired a three and a half hour work session with council with three items. The first item was the Green Level Mixed Use Destination Center which will be located at Green Level West Road next to I540. The center will be roughly the size of the Waverly Place intersection and is planned to have a hospital. It will include 13 pods (areas of development) with 300-750K square feet of office, 30-55K square feet of commercial, a 250 room hotel, 100-200 residential units, and a hospital with up to 100 beds. The council discussion focused mostly on the internal streets specifically the pedestrian and bicycle access. Intersection improvements, parking, site access, retaining walls, streetscape, community gathering areas, and historic structures were also discussed.

Our next topic was on police body cameras. This will be a million dollar initial investment and will be fully operational by spring of next year. Various vendors have been researched and tested throughout the year. It is important that all officers be able to use the same equipment. In addition, car cameras must be on the same system as the body cameras. The presentation included several interesting facts. For example, in stressful situations people don’t see or hear a lot of things. We saw several videos to prove that point. Who has access to the video captured was also another interesting topic. Recordings are not public record. People only have the right to see the part of the video they were in and it takes a Superior Court judge to give authority to release video. The Council can review released video in a closed session. A new police statement (183) on this topic was created. It says “The Town of Cary Police Department will utilize body-worn and dashboard cameras when carrying out law enforcement responsibilities as detailed in a departmental General Order and consistent with all federal and state constitutional, statutory, and regulatory requirements.”

Our last topic for discussion was on stormwater. Here are some takeaways from that discussion:

The council agreed to change its ordinance to require developers to create 100 year storm retention or prove that no mitigation is needed. Stormwater issues are a Cary problem and a problem for municipalities all around the country. Cary is leading the way with solutions. However, the solutions may take a long time to solve all of the problems. But it is our hope we can make significant progress on the biggest problems.

Thursday started with a reception for the hometown spirit award nominees. The Hometown Spirit Award is bestowed annually on a Cary citizen who enhances the quality of life in Cary by preserving, promoting and carrying out positive and quantifiable traditional small-town community values and traits. For example: helps out neighbors and fellow Cary citizens; demonstrates hospitality, promotes and preserves traditional American past-times; shows a concern for preservation;  works to preserve traditions and the small-town atmosphere in the community; promotes a sense of community in their neighborhood and all of Cary; demonstrates patriotism through promotion and preservation of the country’s symbols and dedication to the U.S. military, past and present;  and serves the community through business. We were blessed to have three fantastic nominees this year: Guy Mendenhall, Brent Miller, and Cindy Sinkez. I have had the pleasure to know Brent and Cindy for years but unfortunately have only met Guy a few times. But these are GREAT citizens and are part of why Cary is such a great place to live. If you know any or all of these please reach out and congratulate them for being nominated and thank them for all they do for Cary.

Thursday evening the council held its only regularly scheduled meeting of the month. The meeting started with recognitions. First there was a presentation from the We Strive group on cyber security. Next we had the pinning ceremony for Fire Chief Mike Cooper. I look forward to his leadership and believe he will be a great chief. Our last recognition was the Hometown Spirit Award. I was joined by last year’s winner, Ralph Ashworth, and we presented the award to Guy Mendenhall. What a great citizen and it was well deserved.

Our discussion item was on the North Harrison hotels rezoning. The council approved the rezoning for 7.2 acres located at 1623 North Harrison Avenue to go from Residential 40 (one acre lots) to Mixed Use District to allow the development of two hotels with a total of 252 rooms. This proposal has been in the process for two years resulting in a lot of changes. In the end I was the lone negative vote because of concerns of future density on Harrison from Cary Parkway to I40. I hope I am wrong. After a closed session our meeting ended around 8:30.

Friday morning a local mosque under construction caught fire. It was immediately speculated by some, including media, that this was a hate crime. Some media went so far as to ask if this was related to the person, already arrested, distributing Nazi posters. Fortunately, this was not a hate crime but an unfortunate accident. Cary remains one of the safest places in the country and continues to embrace our diverse culture. The following is the final report on this issue sent to council:

Friday evening council member Smith and I hosted the tree lighting portion of the Waverly Place tree lighting celebration. After a few words plugging Waverly businesses we invited Santa out. We did a countdown and Santa threw magic dust on the tree and the tree was lit officially starting the holiday season at Waverly. This was the eighth year for this celebration and I am glad to have been a part of all of them.

Emails from staff this week included a picture of the youth baseball team that the council members sponsored earlier this year. I am glad that we help in such a great program. 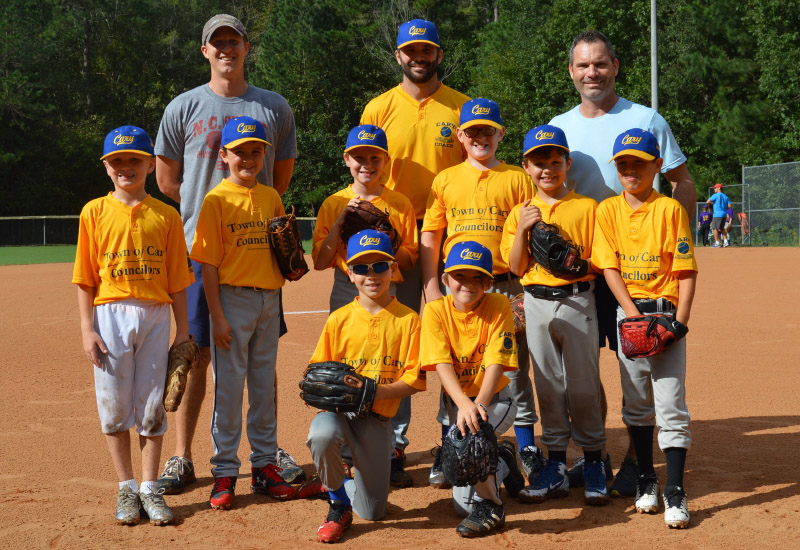 Cary staff presented at the Smart City Expo World Congress in Barcelona, Spain. This smart cities event included over 21,000 delegates from over 700 cities and 146 countries. CIO Nicole Raimundo and Smart City Project Manager Terry Yates opened the USA pavilion along with US Consul General Robert Riley and other North Carolina delegates including the City of Raleigh, corporations and non-profit organizations such as Trilliant, Research Triangle Clean Tech Cluster, Itron, etc.

Staff shared how Cary is using smart city solutions to create a connected community, single source of truth and improved services for citizens.

Weather permitting; the southbound lanes of SW Cary Parkway from High House Road to Marquette Drive/ Lonesome Pine Drive will be closed from 4 p.m. on Saturday, November 17 to 4 a.m. on Sunday, November 18.

Internal and external stakeholders from the six participating jurisdictions (Cary, Raleigh, Durham, Chapel Hill, Orange County, Durham County) met at RTP Headquarters to present the Resilience Assessment report, the first deliverable, to a wider set of stakeholders. Jim Fox from UNC Asheville’s National Environmental Modeling and Analysis Center (NEMAC) presented and told the group that this is the first regional assessment of its kind. Key themes were:

Many thanks to the staff who attended and who participated in developing this collaborative multi-disciplinary work product.

Staff from multiple departments participated in the Reedy Creek Middle School Career Fair, sharing their calling to and passion for local government and the variety of careers that are available under the local government umbrella.

We hope everyone enjoys the Thanksgiving holiday next week! What a wonderful time to reflect and be grateful for good in our lives.

Town offices will be closed November 22 and 23.

GoCary will be closed on Thanksgiving; fixed routes will resume normal operations on Friday.

We will not be sending out a Weekly Report next week. I would, however, like to recognize all of the staff that will be serving our public over the Thanksgiving holiday while town offices are closed. Thank you! 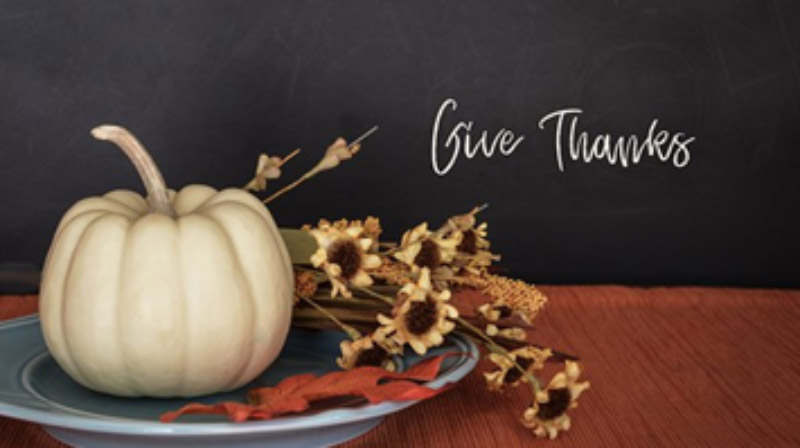 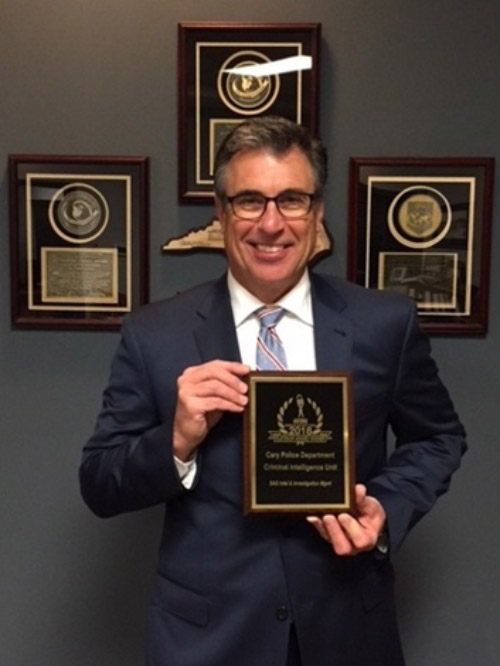 These SAS applications allow investigators to merge and analyze data from disparate data sets like investigation reports, CAD/9-1-1 and external cell phone data and publish the data in easily-interpreted dashboards. Visual Analytics allows investigators to monitor and interact with these data over time, with the goal of producing more comprehensive evidence and activity trends.

The Employee Recognition Reception at the Cary Arts Center was a great success. Hundreds of employees enjoyed camaraderie with their cohorts and celebrated their 210 colleagues who reached anniversary milestones of 5, 10, 15, 20, 25, 30 and 35 years of service. Also in the spotlight were ten Employee of the Year nominees and two Team nominees, a new category added this year to highlight our OneCary efforts. Recognition for service achievements included signature gifts along with fun poses with props in a photo booth. In addition to the photo booth fun, attendees enjoyed great food and entertainment. This was the first year without a formal program; instead, we aimed for fun as the main feature. Special thanks to Renee Poole and her amazing staff for making this a memorable event for our employees.

Next week will be Thanksgiving week and it is my hope that everyone has a happy and joyful Thanksgiving. I am looking forward to hosting family and friends. There will be activities for me earlier in the week including a meeting of the Wake County mayors, a funeral for a former P&Z chairman, and the opening of the Chinese Lantern festival.

Well, that is all for this week. My next post will be on Sunday, November 25th.  Although I have Facebook and Twitter accounts those are not the best means of communications with me. Please send all Town of Cary questions or comments to Harold.Weinbrecht@townofcary.org and email personal comments to augustanat@mindspring.com.

Canes Bounce Back from Columbus Loss to Beat the Devils