Cary, NC – This past weekend was great for Carolina Hurricanes fans, with big wins over both the Toronto Maple Leafs and the Florida Panthers.

The Carolina Hurricanes picked up a huge win with a 5-2 victory against a very strong Toronto Maple Leafs team. The Leafs are third overall, second prior to this game, in the NHL in points and were the top team in the Eastern Conference. Tampa Bay leapfrogged the Leafs last night with a win over the Panthers who the Canes played Friday night.

This game was a total team effort with all four lines playing very well including the season premier for Victor Rask, solid defense and fine goaltending by Curtis McElhinney.

The game had a very fast start with both teams flying up and down the ice. The Leafs bought talent during the Summer and drafted great players during their numerous years they stunk. Those years are in the rear view mirror as they are now solid in all aspects on the ice with maybe defense as the weakest part but that’s a stretch. William Nylander, an excellent young center is an RFA that must either sign a new contract by Saturday, December 1, 2018 or face not playing this season. The Leafs can trade him but the new team must also sign him.

The Canes are one team in active talks with the Leafs and with the plethora of good young defensemen and prospects, there’s a shot he could call the PNC Arena his home ice before too long. There’s also a possibility Scott Darling could be part of that trade. The Canes were taking every opportunity to throw rubber at Frederik Andersen, many of them fluff shots with no chance of going in but it was apparent the Canes’ game plan was stay in the Leafs’ end as much as possible and good things could happen.

Andrei Svechnikov, who gets more confidence with every game, was winning battles in the corner and showing his youthful strength out-muscling the Leafs’ defensemen. It was Svech’s hard work that led to the puck getting to the dirty area of the Leafs crease with a melee erupting. The puck slid out with Trevor van Riemsdyk slicing in and swatting the puck innocently along the ice just inside the right post to get the all important first goal of the game.

The Canes were 6-2, now 7-2, scoring the first goal of the game. Just 22 seconds later, Jordan Staal won a face-off, dishing the puck back to Calvin deHaan. deHaan carried the puck up the ice as if he was a deft left wing. deHaan saw Justin Williams beat his defender to the crease then made a sharp pass that Willie redirected high to put the Canes up 2-0. The Leafs cut the score when John Tavares intercepted and ill-advised clear by the Canes at their own blue line and went in on McElhinney all alone and he just doesn’t miss those gifts. At the end of the period, the Canes threw 29 shots on goal which shattered the old team record of 26. 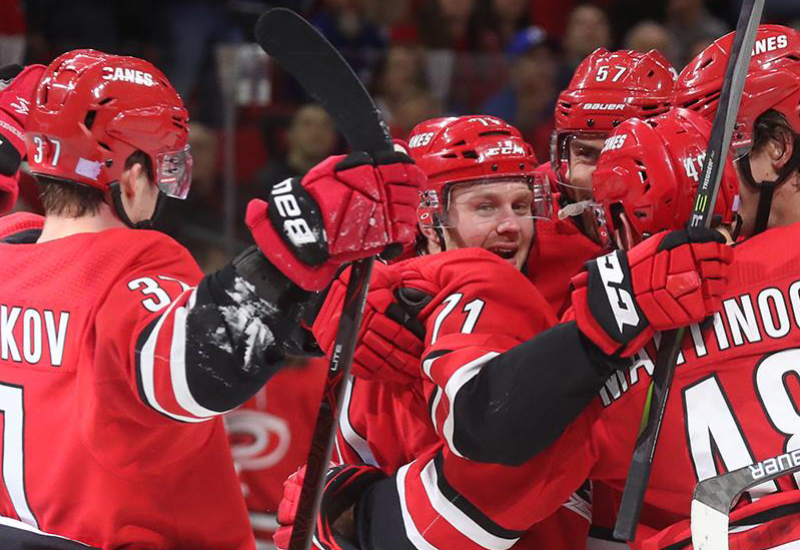 From 29 Shots to Just Two

The ice was slanted the same direction in the second period as the Leafs got off 12 shots with the Canes going cold and having a season low two shots. It’s not as if the Leafs’ forechecking was lacking in the first and they found it in the second, it was the Canes were playing more conservatively, as well as the Leafs who were checking tighter.

McElhinney was up to the task, stopping everything with most saves being redirected to the boards. Picking up McElhinney has been a great move by GM Don Waddell but goalkeeping still needs to be addressed as none of the three keepers on the roster are legitimate #1 goalies, but for now, maybe for the season, Rod Brind’Amour will be going with the hot hand. The defense starred in the second with Justin Faulk, Dougie Hamilton, TVR, deHaan and Haydn Fleury all having solid play.

The Canes used the slant of the ice to their advantage and had more shots within the first two minutes than they had in the second period. Early in the period with the puck around the Canes’ net, Fleury was battling Andreas Johnsson on the right side of the net and was tripped as he was going for the puck at the boards giving what was the only man advantage the Canes would have this game.

On the powerplay, Sebastian Aho took a shot from the right point but his stick broke. The Leafs flubbed a clear that Teuvo Teravainen saved in the zone right at the blue line. Turbo carried the puck to his left then sent a cross ice pass to Michael Ferland who one timed it in to put the Canes back up by two. The Leafs’ Kasperi Kapanen, son of former Cane Sami Kapanen, inherited his father’s speed and went down the right side sending a laser in the far top corner to give the Leafs life.

Late in the game with Andersen pulled for the extra skater, Aho was able to put one in despite two defenders deflecting the puck. Brind’Amour rewarded the third line for their play throughout the game and put them on for the next shift. Jordan Martinook won a puck along the far boards, passing up to Lucas Wallmark who just wanted to clear the zone. Svech chased the puck down past the goal line, not only avoiding an icing but was able to grab it with one hand while fighting off a defender to slid it in for a deserved goal capping off an excellent game. The team’s celebration continued to have a new twist alone is keeping fans in the arena just to see and join in. 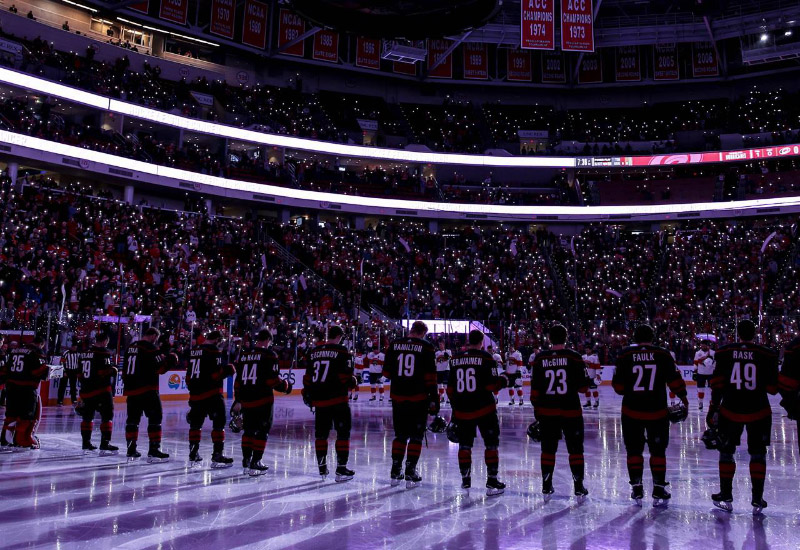 The Eastern Conference is stacked with excellent teams and if the Canes are going to be a playoff contender, the Canes needed to get at least 9 out of a possible 12 points during their season long home stand, which they did. After one of their best team games the night before Thanksgiving, beating the Maple Leafs, there was no way the team was going to have a let-down and fall to the Florida Panthers.

On Black Friday, the Canes wore their lucky black sweaters and that streak continued at three and the Canes won their third straight with a 4-1 win led by Jordan Martinook’s first career hat trick and Curtis McElhinney in net flirting with a shut out.

The game started out with both teams in high gear with no effects of having too much turkey the day before. The early action was very entertaining hockey up and down the ice with good shots by both teams and better saves by McElhinney and one of the NHL’s most-liked players, Roberto Luongo. After working hard in the far corner and moving as best as he could toward the net as a defender was all over him, Sebastian Aho made a pretty back hand pass to Michael Ferland for a shot in close, forcing the first great save by Luongo.

A few minutes later, Haydn Fleury used his muscle and speed, went down the left wing, making a laser of a pass to Aho who put a hard backhander wide then cocking his head in disgust of a lost opportunity. Mike Hoffman got a golden opportunity to make it points in 18 straight games when he got a gift of a pass for a point blank shot but McElhinney robbed him with an unbelievable save.

The third line of Lucas Wallmark, Andrei Svechnikov and Martinook were playing lights out every shift. The mix of youth, experience, muscle, grit, sandpaper, skill and speed has been lacking on both the third and fourth lines for years but both lines now have that talent. Very late in the period with the third line on the ice, Wallmark was banging the puck up against Luongo’s pads while getting knocked silly when the puck squirted out on Broadway, Martinook turned on the jets, picked up the loose change and buried one top shelf while Wallmark was flattened by a defender along with Luongo who had to leave the game with a twisted knee. 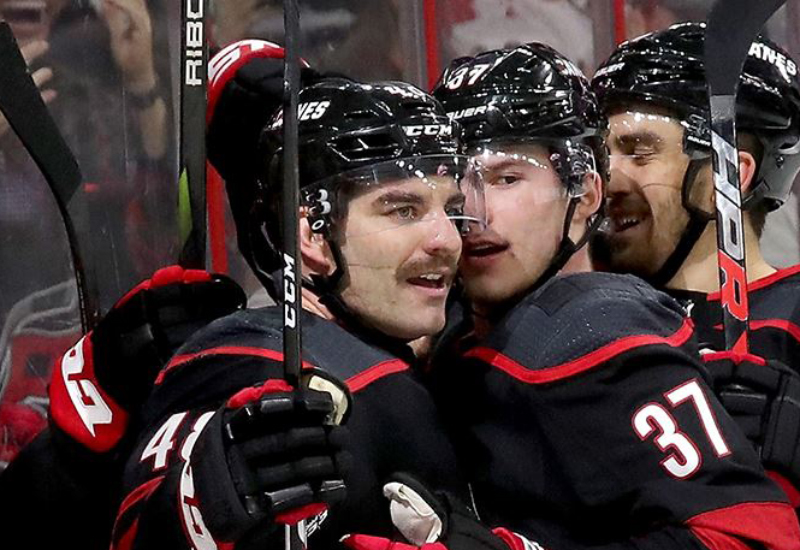 McElhinney In A Zone

On the first shift off the second, Svechnikov had the puck along the near boards, decked his defender sending a beauty of a pass to Martinook, but James Reimer made a quick pad save thwarting the attack. On the ensuing rush by the Cats, Troy Brouwer was taking the puck deep along the boards making a cross ice pass that McElhinney deflected with his stick as he was at the top of his crease with the defense slightly out of position.

After a stoppage of play at the Cats goal, Martinook was shoved while down, got up quickly to take exception then got tangled with Mike Matheson with both going off and was glad to see the correct call in a double minor to Matheson for the initial shove to the back of the head. Later, Jordan Staal got called for slashing on Keith Yandle that Staal questioned. Replay left no question it was a slash but the replay didn’t go back far enough to see what caused Staal to get off his normally clean game.

Once again, McElhinney made fantastic saves, as his game is normally redirecting pucks to the boards with the stick, pads or blocker but this game his glove was his best all season. Give credit to the defense as they were clearing the crease allowing clear sight to most shots. The Canes defense tightened up as by the 15 minute mark the Cats only had three shots.

Very late in the period, Teuvo Teravainen had the puck in dead slot area without a defender within 12 feet but passed over to Aho wide of the goal and with Aaron Ekbald defending Aho while the Caniacs and Canes bench questioning that decision.

Early in the third, Svechnikov carried the puck over the Cats blue line dropping a pass to Wallmark. Wallmark’s shot was blocked but he retrieved the puck making a sweet drop pass to Marty skating hard down the middle of the slot and buried his second, high glove side to make it 2-0.

A short time later with the Canes on a powerplay, Justin Faulk had the puck on the right point passing to Aho along the boards. Aho skated around looking for a teammate, found Teravainen at the top of the circle, got the pass, skated to the middle sending a laser to the top corner to make it a comfortable 3-0 lead. Rod Brind’Amour had a wide smile with that goal that could have meant his message during the intermission of shoot first sunk in.

Brouwer broke the shut out at the 14:06 mark on a partial break away that McElhinney made a gallant effort but the shot had eyes. With Reimer pulled with over two minutes to go Wallmark got his third assist of the game on a lead pass to Marty who made no mistake on the shot into the empty net. It was a great and loud crowd with a wave late in the third that was one of the best and loudest in the past eight years.

In listening to Martinook’s interview after the game as the #1 star, he said the wave was exciting and like so many players before him, said the Caniacs are “really loud” and that does help the team get stoked. Great way to end the home stand and stay in the playoff picture which is the only way to have a shot at The Cup.