Cary, NC – Margaret Travis is the daughter of Reverend G.T. Mills, who was one of the first pastors of Green Level Baptist Church. She gave us a history of that church.

When Green Level was settled in the 1700s, there was not a church anywhere in the area, so Mr. Addison Council asked the people, “Don’t we need a church here?” They agreed, since their churches were far from where they were living. Some men in the community were Masons, and they asked if they could meet in the cotton gin but were turned down. The whisky tavern was the only other option, so they asked the owner if they could have Sunday school there. He allowed that to happen. Matthew Ferrell, who lived in the community, was a preacher. He agreed to be the pastor of the new church. They named it Providence Baptist Church. On September 3, 1870, he held a revival and thirty-six people came. Twenty moved their letters from Mt. Pisgah in Salem, and sixteen others came to be baptized during the revival in the stream below the church called White Oak Branch.

In 1871, when they had outgrown the whisky tavern, they changed the name to Green Level Baptist Church. Addison Council and his wife donated two acres of land at the top of the hill to build a church. The men of the congregation cut the trees, took them by mules to the sawmill, then used that lumber to build a two-story church. The total cost to build it was $148.00. In 1891, my father, as a twelve-year-old child, became a Christian there, little knowing that one day he would become pastor of that very church.

The congregation met in that first building until 1904-5, when they had outgrown it. Again, the church members came together and built the largest Baptist church in the area, finished in 1906. In 1920, they called my daddy, G.T. Mills, as pastor. In 1921, he realized the need for Sunday school rooms, so the men built a three-story Sunday school building behind the church, a parsonage beside it, and a school on the other side that was called Green Level High School. Between the church and the parsonage, they also built a small, fourteen by fourteen-foot building for my daddy’s study. Many years later, my sister bought that little study building and had it moved to her property, so it is still in the neighborhood, and is still in good condition.

Now the church has been redecorated, painted and upgraded. It has improved in appearance, with outside entrances. It is now on the National Register of Historic Places. There is a brass plaque outside of the church telling everybody who goes to see it that it is a historic church to be preserved for all time. 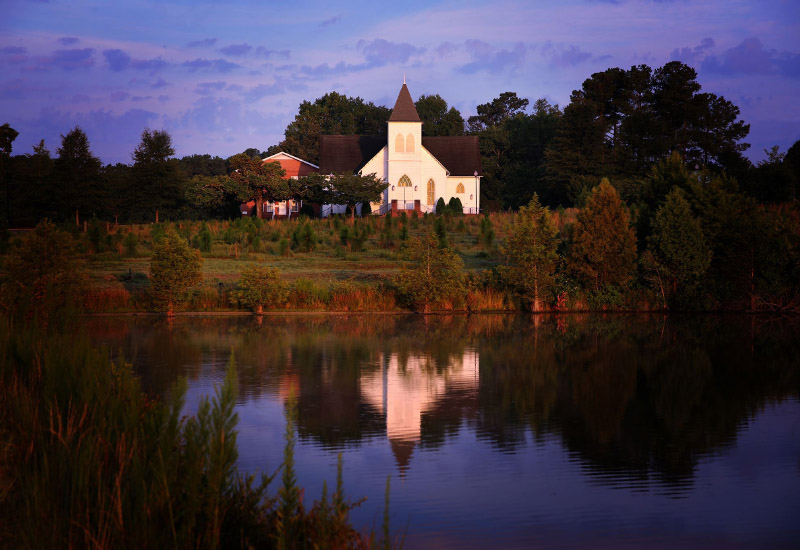 Story by Peggy Van Scoyoc. Photo courtesy of Green Level Baptist Church. Much of Cary’s Heritage is taken from the book, Just a Horse-Stopping Place, an Oral History of Cary, North Carolina, published in August, 2006. The book is a collection of oral history interviews conducted between local citizens and Friends of the Page-Walker Hotel. The rest comes from later oral history interviews with local citizens.