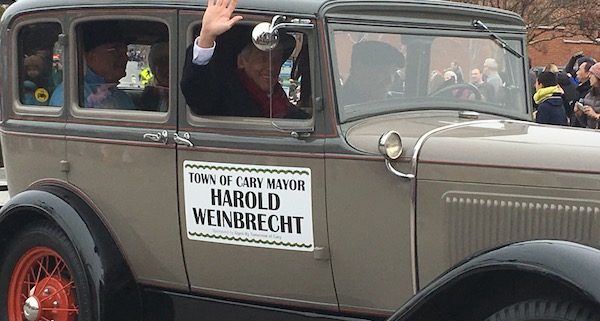 Cary, NC – This week was very slow since it is the week before the Christmas holiday and New Year’s.

Monday I attended the annual Mayors Association holiday dinner which was held in Wake Forest. I was joined by council members Robinson, Smith, and Yerha as well as several staff members. It was a time of fellowship and for reconnecting with officials from all over the county. I estimate there were over 100 people in attendance. The Mayors Association and municipalities paid for the elected officials’ dinner. We all paid for our spouse’s dinner.

Tuesday night I joined several council members for a Sister Cities social event with hors d’oeuvres. This was another opportunity to talk to people you haven’t seen in a while. There were about 25 people in attendance.

Friday I did an interview for a Dude Solutions podcast which will air early next year. The interview lasted over 30 minutes with a wide range of questions about how I became involved in government to issues of the day. I will post the link once it has been made available.

Continuing the research phase of the Town’s community branding effort, a community-wide survey is now available for those who work and/or live in Cary to provide input. Check out the survey on the Town’s branding project page at www.townofcary.org/branding. The survey will remain open through January 31.

There is a noticeable decrease in congestion at the intersection of Cary Parkway and High House Road with the opening of the new left and right turn lanes. We have begun installation of the aesthetic enhancements including the decorative, stamped brick crosswalks and bus shelter. These features will add unique visual elements to this signature intersection. 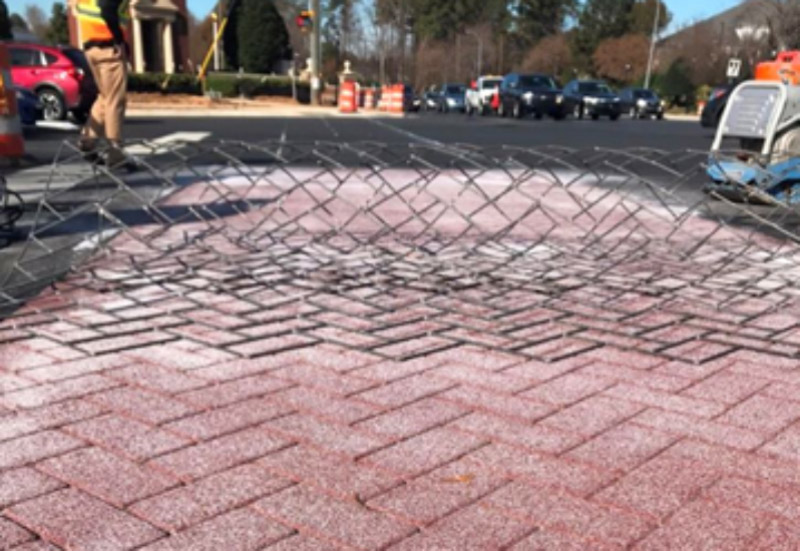 Council approved funding of a pedestrian connection along the east side of Ederlee Drive from Regency Parkway to Penny Road as part of the FY2018 Sidewalk Improvements Project. Council also approved staff’s recommendation to install a street-side trail instead of sidewalk, since it would provide a missing link in the proposed greenway plan. Sidewalk already exists along the west side of the street.

Transportation & Facilities staff completed design plans and started preliminary discussions with property owners regarding needed rights-of-way and easements. Property owners raised significant concerns regarding the impacts to their property and landscaping in the path of the new street-side trail. Jerry Jensen, Director of Transportation & Facilities, along with several staff members conducted a field investigation on December 7 and followed up with a meeting with property owners and representatives from the Regency Park Estates HOA on December 18 to discuss their concerns and share the results of our field investigation.

What was discovered is that Ederlee Drive, as originally built, does not have a grass shoulder wide enough to accommodate a street-side trail without causing significant impacts to adjacent properties, buffer-type landscaping, and existing street light poles. Staff, adjacent property owners, and HOA representatives believe that a more appropriate pedestrian connection should consist of a sidewalk, not a street-side trail. A sidewalk can be built within existing rights-of-way with only minor impacts to landscaping.

Unless I hear otherwise, staff will bring this recommendation to Council for formal consideration in conjunction with a staff report to consider new sidewalk projects associated with FY2019 funding.

In an effort to become more efficient and utilize technology when performing building inspections, the North Carolina Department of Insurance (NCDOI) has approved a pilot program that allows Cary I&P to utilize live video streaming technology to complete certain re-inspections. I&P staff developed a procedure for how the remote inspection program would work last summer and sought approved from NCDOI but were denied. After a few months, however, NCDOI reconsidered the request and approved the process in Cary. I&P code officials will notify contractors and citizens when certain re-inspections qualify to be completed remotely.

On December 12, staff from the Western Wake Regional Water Reclamation Facility (WWRWRF) participated in a multi-departmental/multi-agency infrastructure security review led by a Protective Security Advisor from the U.S. Department of Homeland Security’s Office of Infrastructure Protection. The review was voluntary and requested by WWRWRF Manager Damon Forney.

Consultation services provided by Homeland Security are confidential and benchmark infrastructure protection against similar facilities throughout the nation. Several departments and agencies participated in the daylong overview of security and infrastructure protection for the facility including Cary staff from WWRWRF, Utilities, Police, Water Resources, Risk Management and Information Technology, Apex staff from Fire and Utilities and Wake County EMS.

The event provided an open forum with subject matter experts in several disciplines to discuss vulnerabilities ranging from physical security and cybersecurity to basic dependencies such as power, fuel and staff. Multiple operational scenarios were discussed throughout the daylong event. Information and data obtained throughout the session will be compiled by our Protective Security Advisor from Homeland Security, the data will be compared with other facilities, and a report will be prepared to provide a broad overview of our readiness and preparedness for various security risks at WWRWRF. A similar exercise with Homeland Security was completed for the Cary/Apex Water Treatment Facility in November 2017.

The planned pressure zone shift completed on December 13 was our smoothest operation to date. This was the fifth pressure changing operation since 2017. We are pleased to report that while the recent shift included our largest group of citizens, it also resulted in the fewest number of citizen calls after the operation. Out of more than 1,700 metered accounts, we received approximately 12 follow up calls, and most were simply requests for pressure checks on the day of the operation. We received one call for flushing and two calls for potential leaks. Town staff followed up with the citizens and assisted with troubleshooting and next steps. The success of the operation can be attributed to multiple factors, including newer construction and modern plumbing materials, greater citizen awareness and overall preparedness, and a well-coordinated implementation plan.

Citizen engagement through multiple layers of communication has been very important in raising awareness. One of the most important citizen engagement tools has been free pressure testing provided by staff. The pressure tests provide a way for citizens to better understand exactly how water pressure affects their individual home or residence, and whether their plumbing systems are adequately protected from water pressure above 80 psi. From the first to this most recent pressure shift, the percentage of homes requesting pressure tests continues to increase. Over 60% of citizens from our most recent pressure zone shift took advantage of free pressure testing provided by the Town.

We were pleased to welcome SSgt. William Gillespie of the Reserve Training Center Stone Bay at Camp Lejeune to The Cary Theatre. He came to collect the toys that our patrons donated during the Home Alone Quote-a-Long. The generosity of the patrons of The Cary Theater will provide more than 100 children in the eastern part of North Carolina affected by this year’s hurricanes a very nice Christmas.

The Community Services/PHOENIX team held a “Shop with a Cop” event for families in need. Although the event was an overall success, there wasn’t quite enough funding for everyone, and one family did not get to shop. Sergeant Robin Edwards, supervisor for our PHOENIX and Community Services group, immediately sprang into action and moved this family to our bike giveaway event so all three children would be able to receive new bicycles for Christmas. Several patrol officers from our weekend team wanted to do more so they gathered funds, mainly from their own pockets, to purchase gifts for this family. They shopped, loaded up the patrol car and made the delivery themselves. Just like Santa himself, they did all this during their night shift rotation. 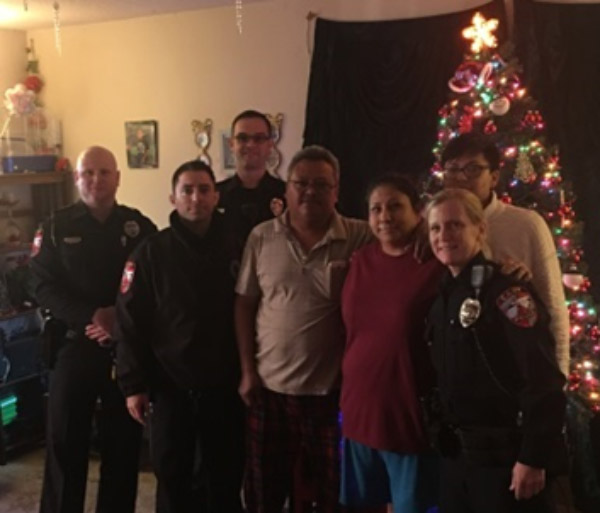 I wish everyone a safe and happy holiday! In addition to celebrations with family and friends, I hope you are able to find time for personal reflection and refreshment. I look forward to working with all of you in 2019.

A special thanks to those 24/7/365 staff members who work when others celebrating. Thank you for your service to our community.

The next Weekly Report will be on January 4.

Congratulations to Tracey Filomena for achieving the Level 2 Challenge Course Practitioner Certification. Level 2 Certified Practitioners possess program knowledge and competencies in the area of facilitation and technical skills including all low and high challenge course elements. Continuous learning on the part of our employees enables us to provide increasing levels of expertise to our citizens.

MONEY not only named Cary the best place to live in North Carolina, but the city also made it into the top 10 of the Best Places to Live in the entire country. Cary offers a quieter, suburban lifestyle with a significantly lower population than nearby Raleigh. You likely won’t have trouble finding a job once you get there, as Moody’s Analytics predicts the area will see a 9.6% increase in jobs by year 2022—fueled in part by the recent spike in tech sector career opportunities in nearby Raleigh, Durham and Chapel Hill (referred to as the Triangle). Within Cary itself, the median home listing is $442,370 with an average of $3,304 in property taxes. And safety counts: The crime rate is lower than in the state’s cities, and also lower than the national average.

We are proud to once again be recognized nationally for all the great things Cary is known for.

I only received one email this week about a rezoning proposal that is early in the process and hasn’t reached council. In the email the citizen stated that the town should not sell the land zoned for a public school to a private school. Unfortunately, there are several things wrong with that statement. The town doesn’t have land zoned for schools. In fact schools can be in several zoning classifications. Also, the town doesn’t own the land in question but it is privately owned. And finally the town has no authority to tell a property owner what they can and cannot propose. Both staff and I responded with information that will hopefully clarify some of the concerns.

Next week is a holiday week and I will be spending time with family and friends. I don’t anticipate having anything to post.

Well, that is all for this week. My next post will be on Sunday, December 30th.  Although I have Facebook and Twitter accounts those are not the best means of communications with me. Please send all Town of Cary questions or comments to Harold.Weinbrecht@townofcary.org and email personal comments to augustanat@mindspring.com.

Samaritan’s Corner: When It Was Her Turn