Cary, NC – The Carolina Hurricanes put 2018 in the rear view mirror with a much need win, a 3-1 decision over the Philadelphia Flyers in front of a great crowd New Year’s Eve. The Canes have been in a funk in a big way over the past month, with this just their fourth win in December. Their biggest problem continues to be scoring while the goalkeeping has been excellent.

It’s unusual this late in the season but tonight was one of those rare nights, with both teams sporting 15-17-5 records and tied for the basement in the Metropolitan division. The game started out with both teams looking out of sync as nothing was working for anyone on the ice. Coach Rod Brind’Amour was pacing the bench area constantly going to Assistant Coach Jeff Daniels and you could sense Roddy was getting irritated about the lack of offense.

Give both defenses credit for sputtering any offensive threat, especially Trevor van Riemsdyk. Maybe it was because TVR was playing against his brother but he really stepped up his game in a physical way. Midway in the period, the Canes broke the stalemate when Jaccob Slavin made a pass from the neutral zone to Lucas Wallmark just as he crossed the Flyers’ blue line. Wallmark took a few strides then used his defender as a screen sending a shot from 45 feet out into the top corner glove side.

Both defenses again buckled down while Curtis McElhinney was absolutely stellar in his 200th NHL game, needing just 50 more to qualify for a full NHL pension. This was captain Justin Williams’ 1200th game and while his speed has slowed, his play-making ability is still outstanding. 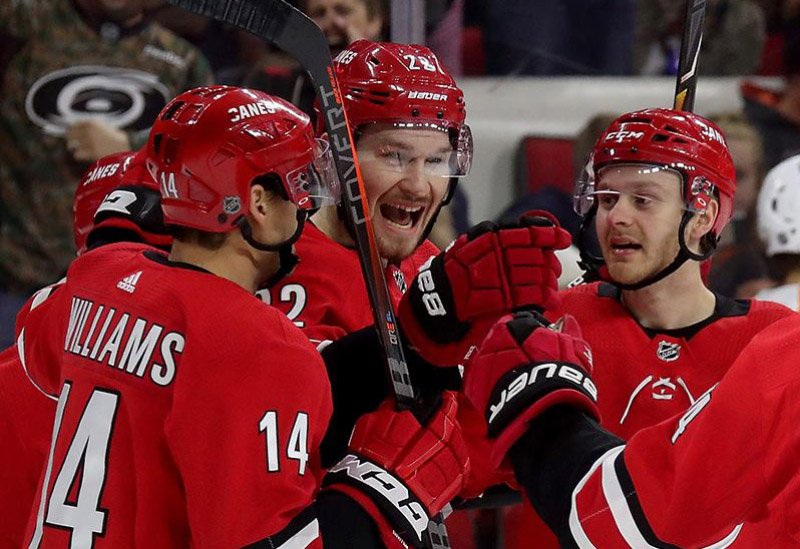 The second period could not have had a better start for the Canes. Right off the faceoff, on what appeared to be a faceoff win by the Flyers, Jordan Martinook jumped on the puck in the neutral zone and with grit and determination clearly out muscled his defender to take a shot that found the same upper right corner for a 2-0 lead with just six seconds gone in the period. That set a new franchise record for the fastest goal in the start of a period, breaking the eight-second mark set by Ron Francis.

Barely two minutes later, call-up Clark Bishop had the puck on the right side passing over to Andrei Svechnikov coming down the high slot with a picture perfect saucer pass. Svech made the decision to use the defender as a screen sending a silent wrister past fellow rookie Carter Hart to give the Canes a solid 3-0 lead. Svech has been playing very well and his strength as well as skating ability is well beyond any normal 18 year old and I can’t help but think as he matures he will be all he’s expected to be. The Canes has a real player with Svech.

That goal chased Hart as the Flyers brought in veteran Michal Neuvirth who has been injured most of the year making just his fifth appearance. The Canes kept the pressure on getting off a game high 14 shots on goal during the period while making its tolerable for CMac with just six for the Flyers.

The Flyers came out in the third with a renewed fire in their bellies, getting physical and using their size around the net. With the Canes having a sloppy line change coupled with Dougie Hamilton at the bench getting a new stick, tough guy Wayne Simmonds found Jakub Voracek all alone on CMac’s left side. CMac slid over to make a block but Voracek lifted the puck over the left shoulder to get the Flyers on the board and killing the shut out. Right after the goal, Williams was vocal on the bench that had an obvious effect on everyone.

The Canes could have coasted but insisted kept up their aggressive play while limiting the Flyers to just six shots for the second period in a row. This was a very good team win with every line on offense and defense contributing by playing hard, in-your-face hockey. Philadelphia has a patent of chippy play and at one point in the third it almost got out of hand but between the refs, linesmen and veteran Canes, cooler heads prevailed.

Next game is Friday, January 4, 2018 against Columbus. Be there! 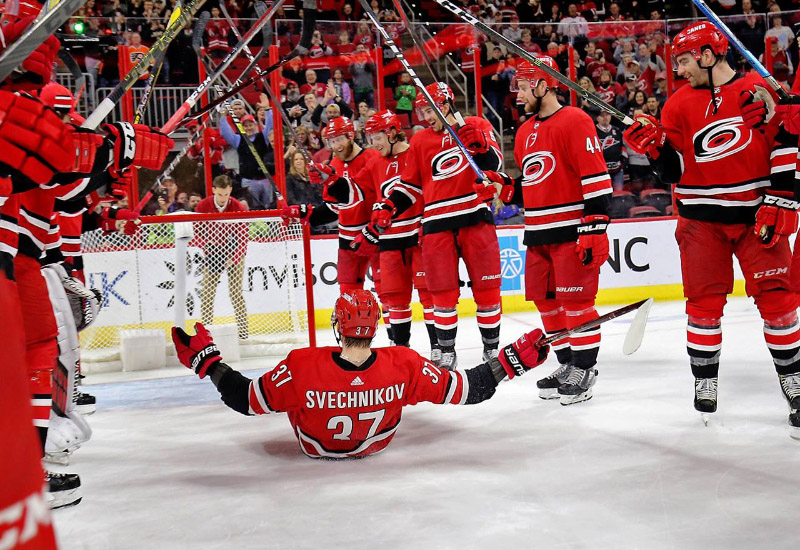