Cary, NC – If you have been through Downtown Cary, you likely saw how the historic Williams House has moved down E Chatham Street. Learn about the house’s history, its connection to radio in the Triangle and what will become of the house in its new location. 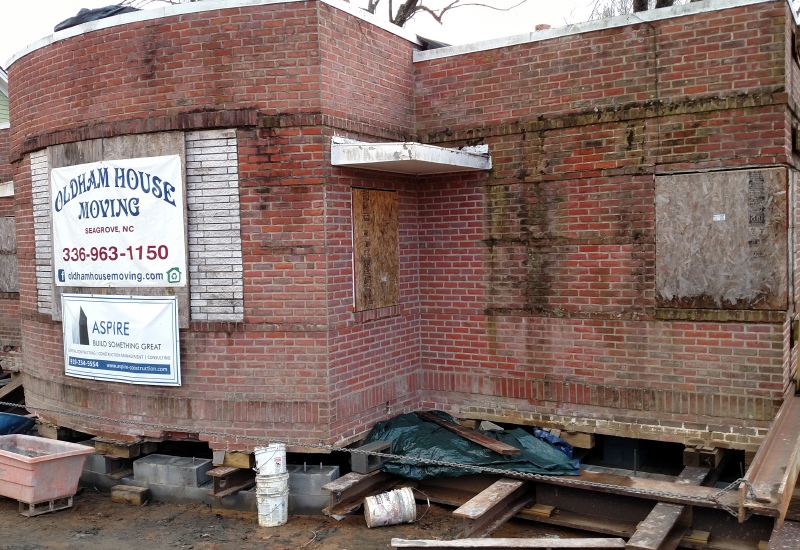 The Williams House, currently in its new location

The Williams House on E Chatham Street was moved in mid-November 2018 from its location at the corner of Chatham and Urban Drive to across from the Midtown Square building. The house, now owned by Chatham Street Commercial, was relocated to make room for the Chatham Walk project.

The house, built in the late 1930s, stands out among Cary houses for a number of reasons. For starters, it has Streamline Moderne architecture, which is a late Art Deco style.

“To Cary, it’s a very unique design. There are no other examples like it in Cary,” said Jordan Gussenhoven, founder and owner of Chatham Street Commercial.

The construction of the house itself is also unique. It was built by the Rickman Brick Company in 1938 and has a brick floor with wire reinforcement as well as a terracotta ceiling.

“The brick mason who looked at the house said he was surprised by the design,” Gussenhoven said.

Photos of the house from decades past also show it was all white painted brick, as opposed to the exposed red brick of the building now, after the paint was sandblasted off. 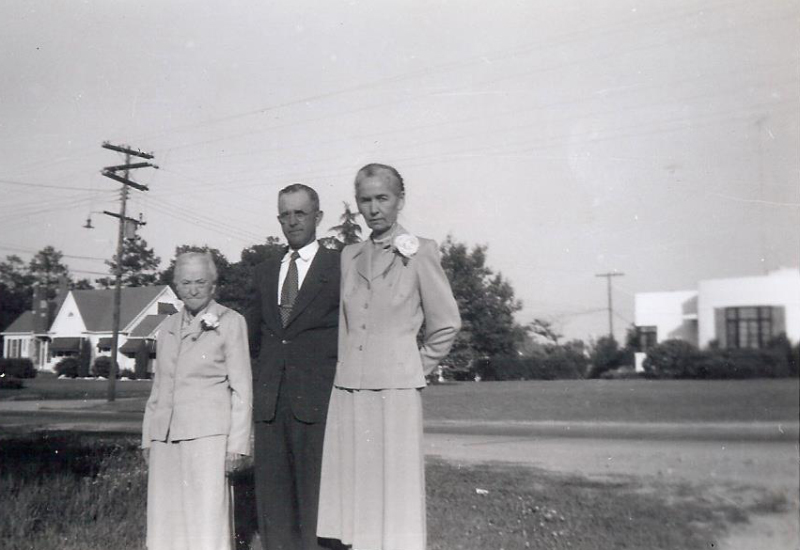 CY Jordan’s family in front of the Williams House in 1953. The radio tower can be seen in the background.

Tony Riggsbee with WPTF said the station never broadcast outside of their main Raleigh studio so there was no programming done at the Williams House.

“Power was raised effective June 10, 1933 to 5,000 watts days and 1,000 watts nights from a new transmitting site at Cary, North Carolina, some seven miles west of Raleigh. Two new 370 foot Ideco towers were installed there to support the station’s antenna,” according to the WPTF website.

Interestingly, there is another building further east on Chatham Street that housed this equipment, and it had similar architecture as the Williams House. 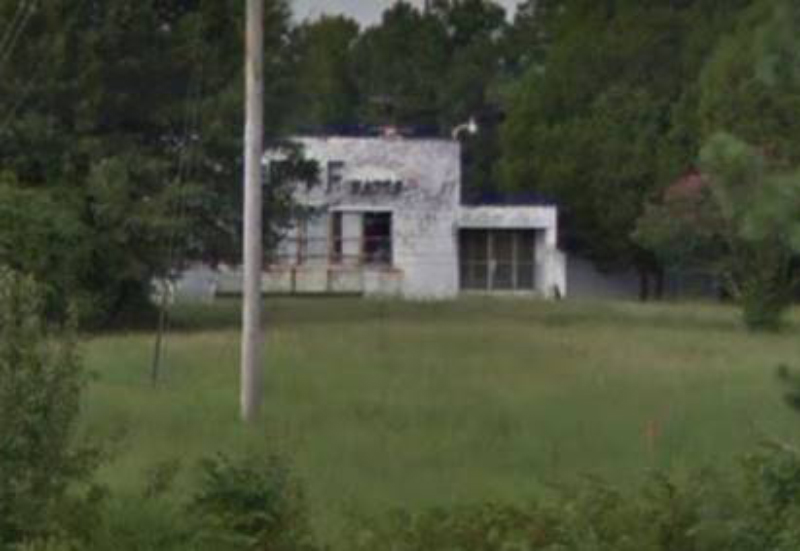 The other WPTF transceiver building on Hillsborough Street

There is one other radio connection to the Williams House and it explains the commonly used name. The Williams family owned the house for only between 1939 and 1945, but their name was associated with the house because they were local celebrities. H. Felton Williams and Margaret Fussell, who both worked for WPTF, were married on the radio, which was a first for Raleigh. 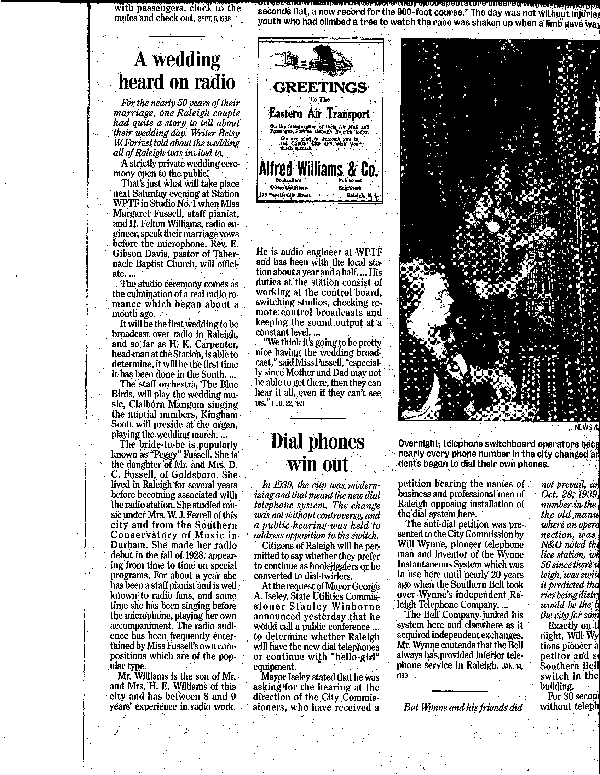 The newspaper article from the Williams on-air wedding in 1931, published in the News & Observer

Now that the Williams House has been relocated, Gussenhoven said it will be restored and rebuilt for a mix of retail and office.

“We will be restoring the original portion and bringing back the white-painted brick,” Gussenhoven said. “We’ll show what it looked like in the past.”

The back half of the house was not moved with the rest of the building, as Gussenhoven said this part was more degraded than the front.

“There was water drainage damage. The back was also all structured walls so the rooms were chopped up,” Gussenhoven said. “It was more feasible to move the front half.”

But the bricks from the back half of the house were saved and Gussenhoven said they will be using them to reassemble walls in the house’s reconstruction.

The addition to the back of the Williams House will also include nods to the original architecture, Gussenhoven said. 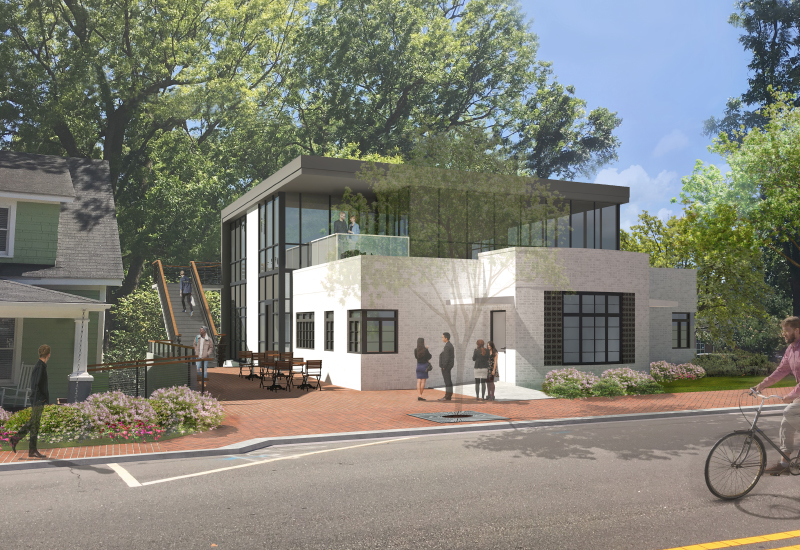 Render of Chatham Street Commercial’s plan for the Williams House

Cary Ranks in Top Five for Labor Force in North Carolina
Scroll to top
%d bloggers like this: