Cary, NC – The Super Bowl may have been slow but the action was fast-paced at PNC Arena as the Carolina Hurricanes took on the Division leaders the Calgary Flames, as well as the Stanley Cup finalists the Las Vegas Golden Knights earlier in the weekend.

Last year after the mandatory week off, the Hurricanes, like many teams, had rust and found it took a few games to get back in game-shape with timing and all. But in playing their first game in what has seemed like forever, it took just a few shifts. The NHL learned from last year when they had teams who had their week off playing teams who continued play with their week off scheduled at a different time, the team coming off break lost all too frequently.

The Las Vegas Golden Knights also had last week off so both teams were equally rusty. Rusty is not in Coach Rod Brind’Amour’s vocabulary so Caniacs knew the Canes would be ready to go. While the Knights scored the all-important first goal, the Canes played a complete game with eight players getting points, including two goals that were unassisted, winning 5-2. 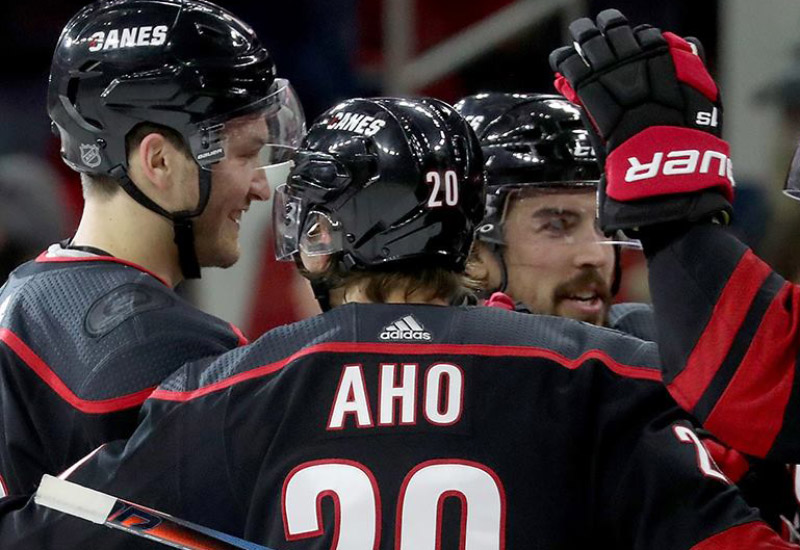 The first shift or two for both teams weren’t the prettiest of the season as passes were all too frequently behind the intended teammate, but the drive and passion were there. Justin Williams, who has been a great captain, got the first penalty of the game when he grabbed the stick to stop a Knight blowing by him on the far side. The Canes’ defense was doing a great job thwarting the Knights from a shot in close, forcing the puck on the perimeter. Nate Schmidt was on the left point, made a long cross ice pass to Shea Theodore on the right point with his stick cocked for a shot. Theodore sent a perfectly placed slap shot to the far right upper corner that found Petr Mrazek in a little too deep and not able to stop his slide to his left quick enough.

The Canes have only won six games after surrendering the first goal but none were on a Friday home game in which the Canes wear their good luck black sweaters. Just over the 11 minute mark, Justin Faulk passed the puck to Willie camped out right in front of goalie Maxime Lagace. Willie kicked the puck soccer-style to the slot where newly acquired Nino Niederreiter slammed the puck in to tie the game. It was the fifth goal in five games for El Niño.

The Knights challenged the goal which was all too similar to a recent goal against the Canes in a game in mid January, and fortunately the goal stood. Late in the period, the Knights came oh so close to scoring when the puck was shot from the far corner going behind Mrazek, hitting the post to bounce in the paint just in front of the goal line. Mrazek flopped down and the puck slipped away from under his pads, but Sebastian Aho was there to swipe it into the back boards.

Pesce, Martinook Put Canes Back in the Lead

Early in the second, Aho had the puck in the near corner pushing a one hander towards the slot. Lagace took two strides out of the crease to push the puck out of the dirty area. Good luck for the Canes and Brett Pesce in particular as the puck was like a softball on a tee as Pesce knew the puck was in before he made the shot.

The entire second period was a faster pace than the first with every player turning it up a notch. Andrei Svechnikov continues to impress and improve with every game. It’s hard to remember he’s only 18 years old as his skill level and strength are well beyond any normal player that age. While he did not get any credit for an assist, how he sets up plays and muscles opponents is just plain fun to watch.

Jordan Martinook centered his line – and nothing against Marty as he’s a solid team player and we’re all glad he signed a new contract over the break – but just like how Jeff Skinner is excelling this season with a first class center in Jack Eickel, once Svech gets a first line center, this kid is going to be the franchise player he’s hyped to be. The Knights were getting stronger as the period went on with Theodore scoring his second of the night from almost the the same spot he scored his first.

Less than 30 seconds later, Brock McGinn, whose name the game announcer does a great job with, came down on the left wing threading a pass to Marty who did a quick shot lifting it short side to put the Canes back up just before the period ended.

Big change in the team this year over the past few years is this team, when heading into the third period with a lead, is playing to keep the lead while also being aggressive on the puck. Playing to keep the lead doesn’t mean turtling – a Brind’Amour team would never turtle – but is cautious with passes, hard on loose pucks, more possession than normal and still aggressive in the offensive zone. If there was more scoring to be had, the next goal would be huge.

And it was. Jaccob Slavin started a clear in the D-zone, passing over to Faulker, who made a long pass to Seabass on the right side in front of the Knights’ bench. Seabass turned on his jets and, with a defender draped all over him, turned down his shoulder and went to the net, putting backhander top shelf that was pure beauty and skill sending the Caniacs into a frenzy.

The Knights, who were in the Stanley Cup finals last year, are a good team and dug deep, started getting a little more physical. The Canes met the challenge and held off every attack with the defense playing exceptionally well along with Mrazek being solid in net. With the Knights’ goalie pulled late in the game, Faulkner sent a 195-foot shot to the center of the net to seal the win putting the nearly sellout crowd into high fives all around, just waiting for the team celebration.

Noteworthy: with the two points tonight, Faulk is now the franchise point leader for a defenseman passing Mike Babach and Glen Wesley. A special thanks to the Canes for a great game that had four special friends from Argentina attend including Cary resident Gilberto Guitarte.

The Calgary Flames beat the Carolina Hurricanes on Super Bowl Sunday, 4-3 in a game that had all players who played on the opposing team last season get on the score sheet. Dougie Hamilton scored a goal and an assist and Michael Ferland had two assists for the Canes while former Canes Derek Ryan had a goal and an assist, with Noah Hanifin and Elias Lindstrom both scoring a goal apiece.

While the players are all professionals, there’s still that personal desire to do just a bit extra when playing against your former team and everyone stepped up their game. Many Caniacs do want former players, especially fan favorites, to do well on their new teams but hope they stay off the score sheet while playing the Canes. For this game that wasn’t the case. To use former Canes and current Flames’ coach Bill Peters coined phrase, both teams started on time as the pace was good from the opening drop of the puck.

Sebastian Aho was caught behind the Flames’ net after the Canes lost the puck but rather than just lag behind, Aho started going up the ice with his stick stretched out as every coach teaches. With the stick extended, Aho blocked and intercepted a pass, got control of the puck, passed over to Ferland who could have taken a quick shot, but instead passed to Teuvo Teravainen cutting to the front of the goal for an easy tip in that was text book pretty. Shortly after that goal on lines changes by both teams, just as Derek Ryan was headed to the Flames bench, Justin Faulk gave him a shove that had heads turning from the Flames bench. I couldn’t tell if it was a fun shove or something more serious but knowing Faulker’s style, it was probably a welcome home shove.

Just under four minutes later, Mark Giordano took a slap shot from the left point. Lindholm was camped out in the dirty area of the slot and managed to get his stick on the puck that deflected past Petr Mrazek to tie the game for his 23rd air the season. Lindy certainly has the size and talent and it’s good to see him excel with one of the best lines in hockey this year. Later in the period, Andrei Svechnikov got called for goalie interference on one of the poorest calls against the Canes all season. Fortunately the Canes killed off that penalty but there’s something going on with refs calling every ticky tack thing this guy does. Whether it was that call or just the dry spell of not scoring but Svech had an edge in the game. Edge is good but kudos to Justin Williams for stepping in once to calm a potential ugly situation for the rookie. 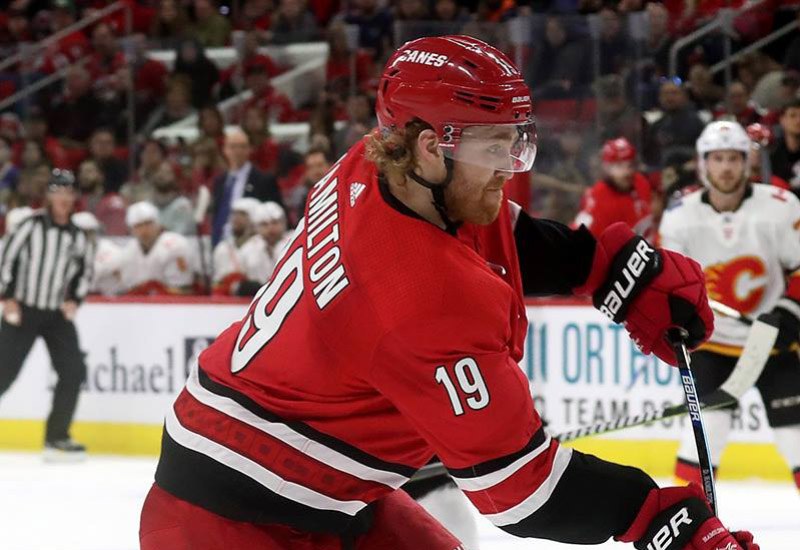 Derek Ryan was so typical of Canes players in the past: small, fast, great skill, scored in small streaks then long dry spells. In the seven-minute mark of the second, Ryan had the puck along the far side, put on a burst of speed, circled the net stuffing the puck behind Mrazek to put the Flames up by one.

Just over five minutes later, Ryan assisted on Garnet Hathaway’s goal, putting the Canes on their heels. Dougie Hamilton knotted his goal against his former team late in the period off a very nice pass from Lucas Wallmark closing out the period on a high note hoping that momentum would carry over to the third period.

Hoping the good fortunes late in the second would spill over to the final period, and knowing the next goal was key, the Canes came out skating hard and fast. Noah Hanifin put a dagger in his former team’s chances when he scored his fifth of the season. Mrazek contested the goal for goalie interference which was more of an interference than Svech’s call earlier in this game but was overruled. I’ll grant it the call was borderline, but no way was the call consistent with the earlier call.

The Canes knew they would have to dig deeper and they did. Hits were harder, passes were crisp and on the tape, shots had the traffic needed in front. About the 17 minute mark, an illusion took place as it looked like Nino Niederreiter put a puck behind David Rittich but with no challenge by the Canes and no replay on the shot, I’ll just have to go with it was an illusion of hopeful thinking.

Brind’Amour pulled Mrazek late in the period and Aho scored off a nice centering pass from Ferland to close out the scoring. Great effort against a very good Western Conference team and congratulations to some former Canes who have found their game.

Next home game is Friday, February 15, 2019 against Edmonton and the best player in the NHL, Connor McDavid. Be there!