Cary, NC – This was a slower week than normal since it included Valentine’s Day.

Monday started with my weekly one-on-one meeting with the town manager. We were joined by the Public Information Officer. We spent about 30 minutes talking about issues including the upcoming staff-council working retreat and a legal matter.

Later Monday I joined the Deputy Town Manager, two police captains, the director of transportation and facilities, engineers, and others in a meeting with Cameron Pond residents about traffic safety issues. Their neighborhood is divided by Carpenter Fire Station Road which means residents have to cross that road to get to neighborhood amenities. While this is a state road, town staff agreed to work with the neighbors and NCDOT to try and find a solution. The solution may include a mid-block crosswalk with median for pedestrian refuge.

Tuesday I had the pleasure of meeting the Environmental Advisory Board for the Mayor’s Monarch Pledge where I declared 2019 as the “Year of the Monarch”. Here is an excerpt from my comments:

“… The Monarch Butterfly is an iconic North American species whose multigenerational migration and metamorphosis from caterpillar to butterfly is known by millions of Americans. Twenty years ago, more than one billion Eastern monarch butterflies migrated to Mexico. In 2018 these numbers were reduced by 90%. Cary has joined cities and towns across the country in playing a critical role to save the butterfly by partnering with the National Wildlife Federation’s Garden for Wildlife Program. We will integrate milkweed into our plantings and commit to educating our citizens about the monarch. I am honored to lead the way as mayor by signing the National Wildlife Federation’s Mayor’s Monarch Pledge. I encourage other city officials across our great nation to take a stand with me so that the monarch butterfly will once again flourish across our continent. …”

After the pledge and proclamation I took pictures with the Environmental Board members. To find out more about Cary’s challenge go to https://www.townofcary.org/recreation-enjoyment/parks-greenways-environment/environmental-outreach/monarch-challenge.

Friday I participated in a meeting of the North Carolina Metro Mayors Association. The purpose of these weekly meetings is to go over legislative actions. So far the legislature is moving slow with less than 200 bills filed this year out of an expected 1500 to 2000.

The meeting concluded after about twenty minutes.

A link to the 2019 fiscal year second quarter report was released this week. See https://www.townofcary.org/mayor-council/town-council/quarterly-reports/q2-fy-2019 for the details. Our fiscal year begins on July 1st.

The Town’s oldest and most recognizable water tank was drained and taken out of service for rehabilitation and repainting. In the coming weeks, you will see a shroud placed on the tank which will allow our contractor to safely remove the existing paint without damaging nearby properties. To ensure that this year’s graduating class is recognized, we will hang a “Class of 2019” banner on the shroud. The addition of the new Kilmayne Tank to our water distribution system allows us to perform this maintenance without affecting daily operations. We anticipate the work on the Maynard Tank to be completed this summer. 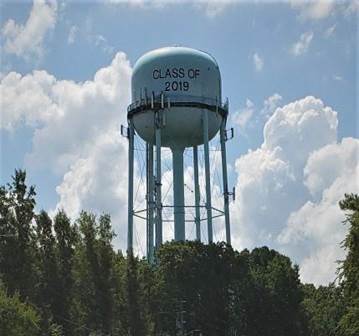 To help us move forward, we offered to extend to the end of this month the art exhibit by Bing Weng, the Chinese artist who was concerned that some of her paintings had, in her opinion, been inappropriately excluded from her show by the Town. The extension included the three paintings in question. She appreciated the offer and chose to have her artwork on display only until February 25. Staff from several departments continues working together to examine and, where needed, improve our processes, training, paperwork, and communication of our artist exhibition program. 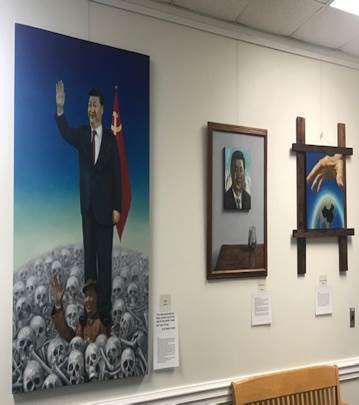 NCDOT and Cary have been receiving many emails and phone calls concerning a dip in the street that is forming along Green Level Church Road just south of the Evans Farm Community. Evidently, beavers have created a dam within the two 72-inch storm pipes under Green Level Church Road, which may be contributing to the settlement in the pavement and causing the dip to form. NCDOT is working on a solution and has indicated that, in the meantime, they will install warning signs in advance of the dip.

We continue to work with the residents of Lochmere Highlands to address their traffic safety concerns. Last week, staff completed installation of our first permanently-installed radar feedback signs. These two devices were installed along Loch Highlands Drive at locations agreed upon by Cary staff and members of the Lochmere Highlands Traffic Committee. Staff will monitor speeds recorded with the devices to determine their effectiveness at slowing traffic over the long term. If successful, this type of device could be added to our traffic calming toolbox.

The solar-powered devices have Bluetooth connectivity for remote data acquisition and speed feedback for motorists that includes flashing speed numerals for speeds over 30 mph and flashing white strobe light for speeds over 35 mph.

In addition to these devices, staff and the Traffic Committee designated the relocation of several road signs along Loch Highlands Drive as a priority. After installing the radar feedback signs, Public Works staff members relocated several safety warning and regulatory signs to make them more conspicuous.

I appreciate the collaboration between staff from Public Works and Transportation and the citizens to develop community-based solutions.

NCDOT’s I-40 and Chapel Hill Road (NC 54) Interchange Project includes constructing turn lanes at both exit ramps, rehabilitating the bridge deck and adding sidewalks. The $2.7 million project will begin in March. This project is in Raleigh, adjacent to Cary. Raleigh is contributing funds to build new sidewalks on the north side of Chapel Hill Road. Sidewalks exist on the south side of the road. Some directional closures on Chapel Hill Road with detours during the night are expected. 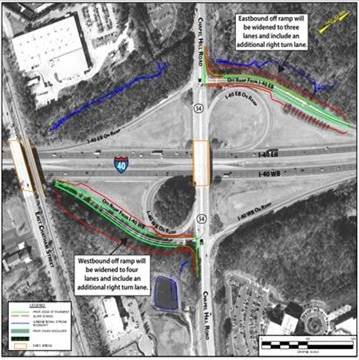 NCDOT plans to re-design the I-40/I-440/US1/US64 Interchange to relieve congestion and address the heavy traffic volumes flowing through the area. Designing an interchange between two highways is not a typical roadway widening project that most residents are familiar with, especially since there are different types of interchanges, each of which operates differently. 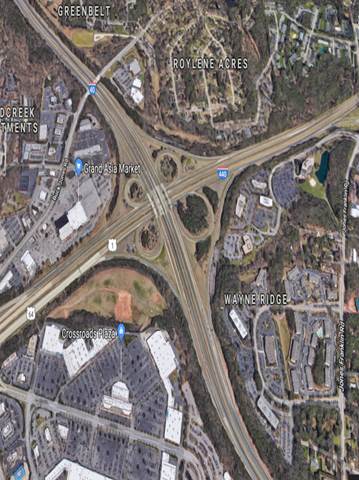 Adjacent to the project is the Walnut Street interchange, which will be impacted due to its proximity. This week staff met with NCDOT and their consultant, Atkins Global, to discuss the public involvement plan, specifically identifying different stakeholders and focus groups. Atkins Global will initiate small focus group meetings to begin informing Crossroads, Centrum, HOAs, and local homeowners about project. These focus groups will be held in the next few months before the first public meeting is scheduled. The draft STIP currently has this project scheduled for right-of-way acquisition in 2023 and construction in 2024.

Recreation and Parks Summit Held at The Cary

Cary hosted the NC Recreation and Parks Association’s 2019 Marketing and Events Summit at The Cary Theater on Tuesday and Wednesday. This annual event offers staff from across the state the opportunity to learn, network and share their most recent successes, ideas and projects with their colleagues. Cary staff presented three sessions:

While each session was unique, they shared common themes around adaptive solutions, changing culture and empowering staff.

We are looking forward to spending time together at the Council / Staff Retreat and focus on high-level, strategic issues. The next weekly report will be on March 1.

As part of American Legion Post 67’s first responder recognition event on February 12, Cary Firefighter Eric Price, EMS Division Chief Chasidy Kearns, and Cary Police Officers Billy Brownell and Austin Hermen were awarded the 2018 American Legion First Responder Award for outstanding service. In addition to the highest levels of citizen service, Officers Brownell and Hermen were nominated for their heroic actions on Thanksgiving Day when they rescued a gunshot victim from further harm and applied medical attention until they could transfer patient care to EMS.

On Saturday, February 9, Doug Peters, PRCR Program Assistant, and David Ranes, Assistant Fire Chief, representing the Cary Teen Council and Fire Department, were recognized at the VFW state conference for the Hurricane Florence donation drive in September. The donation drive was a true Cary Way moment with both staff and citizens coming together to help those affected by the devastating hurricane.

The top item on the PAAB agenda will be Layfette Private Development Project review.

Next week’s activities includes a meeting with staff, a meeting with TJCOG liaisons, a Mayors Association meeting, an historic structures public meeting, a CAMPO meeting, a taping of an abbreviated version of the State of Cary address, and the staff-council working retreat.

Well, that is all for this week. My next post will be on Sunday, February 24th.  Although I have Facebook and Twitter accounts those are not the best means of communications with me. Please send all Town of Cary questions or comments to Harold.Weinbrecht@townofcary.org and email personal comments to augustanat@mindspring.com.

Canes Get Back-to-Back Wins Over the Weekend