Cary, NC – There’s no dancing around this: the Canes played three consecutive periods of lackluster hockey that saw them get totally throttled by the much bigger Winnipeg Jets 8-1. Only three skaters on the Jets did not have a point, which is amazing seeing how every line and how balanced their scoring was.

The Jets, coached by multiple times former Canes coach Paul Maurice, had everything going for them: speed, craftiness, strength, aggressiveness and clearly a much stronger desire to win. The ice was bad and the officials appeared to take the night off, but the ice and officiating wasn’t up to NHL standards for both teams.

The Jets were going to win, no matter what. Games throughout the year all have the same meaning, and while if the Canes got these two points, they would have leapfrogged Pittsburgh for third place and a solid playoff spot, but with the loss they stay as a wildcard for the playoffs. 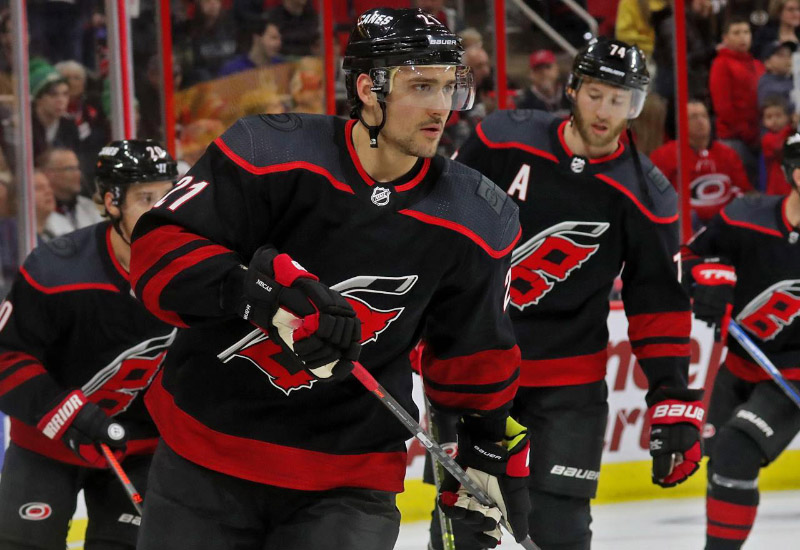 There are 16 games remaining for the Canes and 18 points should be the magic number to solidify a playoff spot and play only four games against teams that have no chance of making the playoffs. The Canes have to put this game in the rearview mirror and move on. It’s no easy task to find any Canes’ highlights or individuals that had a good game.

Jordan Martinook scored the Canes’ lone goal on pure hustle and may be the only positive thing Rod Brind’Amour could find about the game. Just as Marty crossed the blue line, I heard a fan yell out that he’s going to score. He entered the zone with speed and possession of the puck – a rarity for the Canes all evening – and had his shot partially blocked. Dougie Hamilton got the deflection passing over to Calvin de Haan on the left point. de Haan wasted no time in sending a hard shot/pass to the area in front of the crease with Marty crossing in full stride, redirecting the puck past Laurent Brossoit to have the Canes avoid the embarrassing shutout at home.

On one sided games like this, one things both teams try and do is keep the puck moving, which means keep that clock moving to zero so everyone can get out of Dodge. After the Jets scored Goal Number Seven with just under a minute left, the Jets had the puck in their end and just cleared it to milk the time. Curtis McElhinney stopped the puck to negate the icing and keep the clock moving, but the Canes couldn’t clear the puck from their defensive end. Ben Chiarot took weak shot from the right point that glanced off Adam Lowry’s leg bouncing over CMac’s stick for the touchdown and two point conversion win.

For anyone that has played sports or anyone that knows Brind’Amour’s character and drive, would not want to be in that locker room after the game. Worse yet, the Canes had to hop on a plane right after the game as they play Nashville on Saturday night, coached by the coach who replaced Maurice, Peter Laviolette.

P.K. Subban is on the Predators and is a phenomenal player, entertainer and gives back more than most players. While on the Montreal Canadiens, he donated $10 million to a hospital for a children’s wing. He has a series on nbcsports.com that is very good and worth watching the short six minute segments.

Next home game is Saturday, March 16, 2019 against the Buffalo Sabres and Jeff Skinner. Be there!