Cary, NC – This week was a typical week for mayoral duties.

Later Monday I met with the town manager and the chief strategy officer for my weekly one-on-one. Our conversation included a legal matter, the mall site where the new owners will meet with staff on Monday, the hotel occupancy and meals tax and whether funding proposals from Cary will win out over other proposals, and The Fenton development’s groundbreaking. The meeting concluded after about 45 minutes.

Wednesday morning I had the pleasure of giving the State of Cary address to the Cary Newcomers club. This is a social club with a purpose of stimulating new associations and friendships, helping newcomers identify with their community, and promoting local, cultural, and service programs. The Cary Newcomers Club actually started as the Welcome Wagon in 1978. I talked to a group of approximately 100 for about 45 minutes and answered questions for another 15 to 20 minutes. There were concerns about infrastructure in the western part of Cary but for the most part all were very happy to be in Cary. One actually asked me to run for President which I declined. The talk was a lot of fun and I hope they invite me back in the future.

Wednesday evening I chaired a meeting of the Economic Development Committee. There were three items on the agenda including a branding update, a development update, and the quarterly report.

The consultants for the branding have completed their data collection and are now analysis stage. On May 8th they will present their analysis to the Economic Development Committee in a special session. Then they will take that feedback from the committee and work on their strategy. Their strategy should be completed and presented to the entire council later in the fall.

Ted Boyd updated the committee on several items including the Cary Town Center and the Fenton project. The new owners of the Cary Town Center will meet with staff on Monday. They are definitely interested in mixed use that will complement the Fenton project. In their meetings with staff they want to find out what might be contradictory to the Fenton. Their proposal may include Class A office.

Thursday the council held a quasi-judicial hearing to hear three items: a 240 multi-family unit at McCrimmon Parkway and Highcroft Drive, a Twin Lakes development for frozen custard proposing a drive thru and reduced parking, and a car wash at Holly Springs Road and Tryon Road in the Swift Creek Shopping Center. Quasi-judicial hearings continue to evolve to a point where council members have very little choice. That is, only evidence presented by expert witnesses can be considered. The applicant/developer always has experts and lawyers on hand while the general public rarely, if ever, has any. In addition, council has been instructed that council members’ personal or policy preferences are irrelevant and immaterial. So from an elected official’s perspective it is a no-win situation. We are elected to represent our citizens but in this process we are not even allowed to hear or consider their opinions.

As a result of these new rules it is not surprising that all proposals were passed unanimously. We had to sit through over 4 hours of testimony in these hearings from lawyers and “experts” knowing we had no real choice in the matter. I, along with other council members, have asked staff to do away with these hearings since we basically have no choice and it just frustrates the public. It is sad to me that legislation and court cases have put us in a situation where applicants are over protected and we can’t represent our citizens.

Friday I participated in a meeting of the North Carolina Metro Mayors. Here is the summary of that meeting from the Executive Director:

Legislature is really starting to pick up the pace.  Governor Cooper released his budget this week and bill related to school safety cleared the House.  The Joint Appropriations Committee met this week to review the Governor’s budget.  Appropriations sub-committees will meet next week to review their respective sub-sections of the budget and begin hearing from agencies regarding their specific funding needs.

This summary provided by the executive director includes bills introduced that will have significant impacts on metro area municipalities.

Saturday I joined Mayor Pro-Tem Bush, council member Yerha, and council member Robinson in a ceremony officially opening of the 1.9 mile segment of the White Oak Greenway. Also attending were Cary Advisory Board members, Apex council members, county commissioners, and the Executive Director of the East Coast Greenway. All together there were about 100 people in attendance. This segment of the White Oak greenway goes from Green Level Church Road near Green Level High School to the American Tobacco Trail. The White Oak greenway is 7.3 miles long and stretches from Bond Park in Cary to the American Tobacco Trail in Apex. 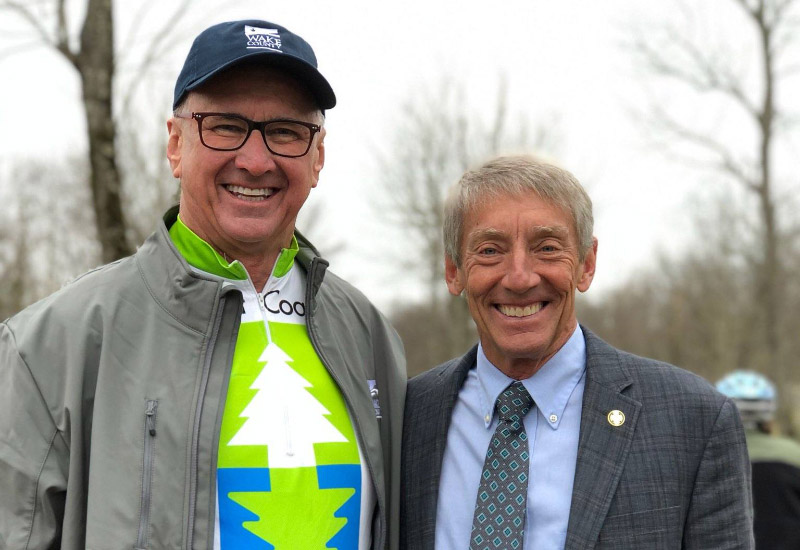 This segment took 15 years of planning and partnership with the Town of Apex and Wake County to complete. Design and funding were provided by our Cary community bonds, the Town of Apex, Wake County, CAMPO, the Federal Highway Administration, and NCDOT. The Town of Apex has agreed to maintain this segment since it falls in their jurisdiction. The White Oak Creek Greenway is essential to Cary. Combined with the Black Creek Greenway it creates the 14.5 mile spine of the Town of Cary Greenway system. The last segment of the White Oak Greenway will be a tunnel under rail tracks in the MacArthur Park neighborhood which should be completed in about a year and a half. Once completed it will be part of an 80 mile contiguous segment of the East Coast Greenway, the largest, which goes from Maine to Miami. The ceremony lasted about 30 minutes and included five speakers followed by a ribbon cutting.

Later Saturday I attended the ribbon cutting for the Spa by Jing in Waverly Place. I toured the facility and talked with several people at a reception. Then we gathered for pictures and cut the ribbon. In my comments I wished them great success and let them know that the town is here to help them thrive and prosper. 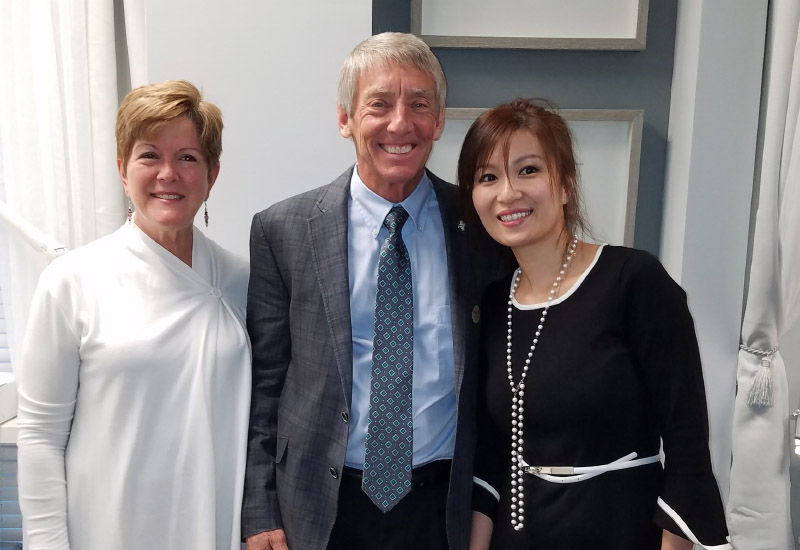 Belinda and Harold Weinbrecht with Jing, the spa’s owner

On Tuesday, I held an All Hands meeting with employees to share reflections from the council/staff retreat. In addition to recapping our work at the retreat, I also provided updates on strategic realignments in some areas of the organization, such as capital projects, marketing and 311. Most importantly, I saw our time together as another opportunity to thank our employees for their service to our citizens and continue talking about our organization’s evolution and journey.

After installing new roads, 7,900 feet of water mains, 15 fire hydrants, 88 residential water connections, a commercial water connection at Woodhaven Baptist Church, a commercial connection at the HOA pool house, one irrigation service at the HOA property, 5,400 feet of sewer mains, 90 individual sewer connections and a water service connection at the pump station, the Holly Brook Water and Sewer Extension project is complete. The Holly Brook community, legislatively annexed into the Town of Cary at the request of the residents, now enjoys the full complement of water and sewer services. The project endured the wettest year on record, two hurricanes and multiple snow storms, but was completed on time and under bid, saving over $1 million which can be repurposed for other utility capital projects.

Staff has worked with the developer of Fenton to phase site clearing and grading to keep as much of the natural vegetative visual screening in place for as long as possible along Cary Towne Blvd. This will preserve visual aesthetics along the street as much as possible before new construction begins to take shape. Thanks to our development review team and the site engineers for the creative teamwork! On another front, the developer continues to work toward an April 1 closing on the property, and we are working on various items to help with this endeavor.

The final few pieces of the Cary Parkway and High House Road intersection improvements are coming into place! Installation of the decorative traffic signals began this week. Weather permitting, the temporary traffic signals will be taken out of service next week, and signal operation will be switched over to the new signals. Most improvements are complete including new turn lanes, bus shelter, and stamped brick crosswalks. Remaining items include final touch up including punch list items and landscaping.

Fifty government officials from Bangladesh visited the Cary Arts Center on Thursday afternoon through a program at Duke University’s Center for International Development Sanford School of Public Policy. The group requested to hear about service delivery in Cary; they had many questions for our Public Safety leaders.

NCDOT has repaired the dip in Green Level Church Road

A Cary Academy student will be attending the meeting to film the board’s discussion about their carbon reduction recommendations.

I received an email this week about construction on Park Street and Waldo Street from staff in response to a citizen’s concern:

Staff is in the process of working with contractors for each project along Waldo Street and E. Park Street in order to open up vehicle traffic to these streets as soon as possible. Each project requires heavy equipment work to be performed within the roadway and for safety reasons have been allowed to close the road to traffic. Both have been impacted by the abnormal rain events this winter and are running behind their schedules. In addition the project along Waldo encountered an underground power line that needed to be relocated which created significant unforeseen delays and resulted in both roads to be closed at the same time.

One of the main objectives for the Town is to keep the general public safe as construction activities with heavy equipment occur in and around work areas. Unfortunately the frequent rain events that we have been getting have direct effect on performing related work and the streets have stayed closed longer than anyone expected.

Staff will be having conversations with each contractor this week to see what can be done to expedite the work.

Next week’s activities include staff meetings, an advisory board gathering, a virtual reality experience of the Downtown Park, a regularly scheduled council meeting, a meeting of the NC Metro Mayors, an Arbor Day celebration, and the running of the Tobacco Road Half Marathon.

Well, that is all for this week. My next post will be on Sunday, March 17th.  Although I have Facebook and Twitter accounts those are not the best means of communications with me. Please send all Town of Cary questions or comments to Harold.Weinbrecht@townofcary.org

New Developments in RTP as NC Looks for Ways to Grow
Scroll to top
%d bloggers like this: