Morrisville, NC – Research Triangle Park (RTP) is planning on three new updates and projects, from office to retail to residential and more, detailed as part of a presentation on what drives economic development in not just the Triangle but North Carolina overall. 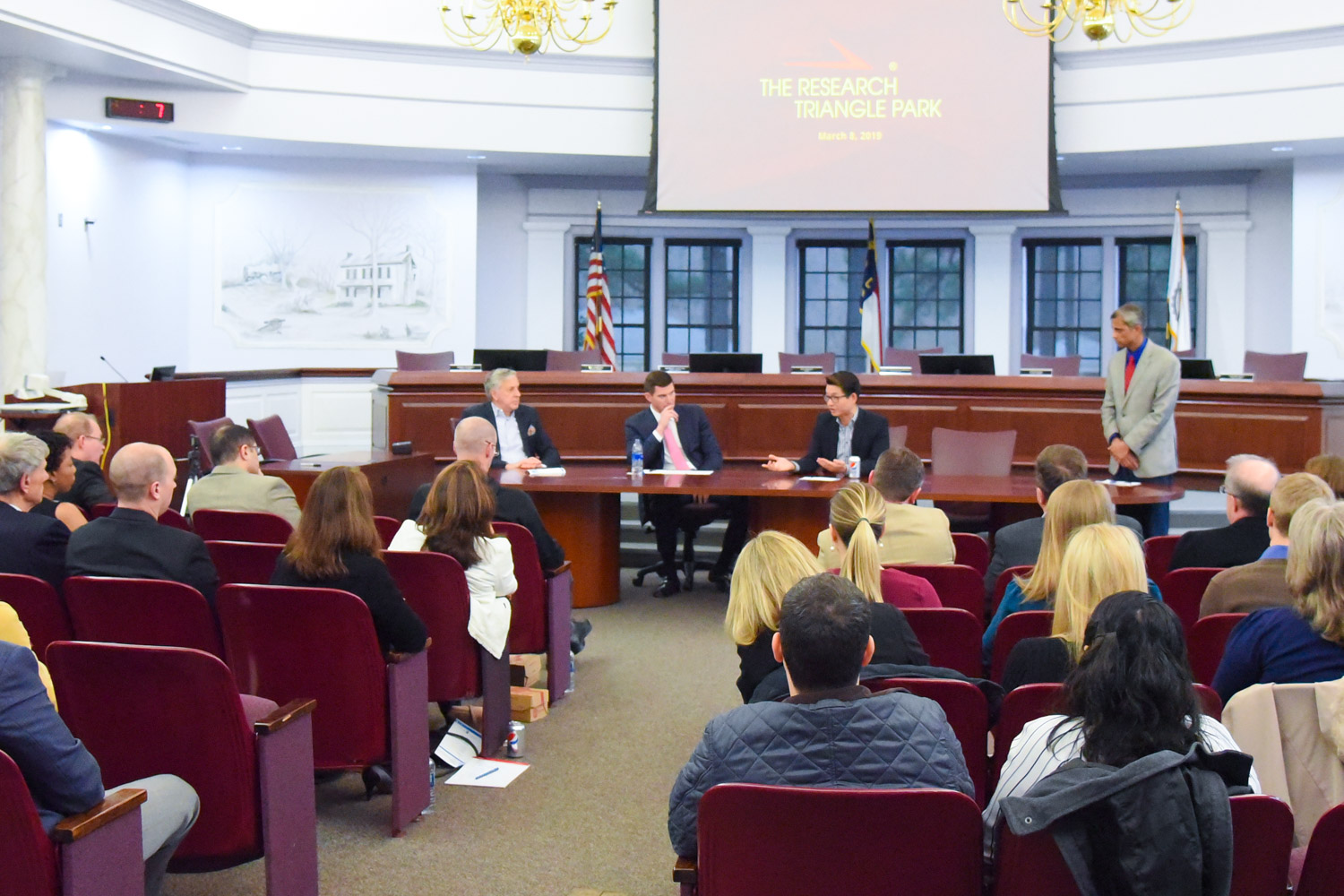 Scott Levitan, CEO and President of the Research Triangle Foundation of North Carolina, spoke to the Morrisville Chamber of Commerce on Friday, March 8, 2019 to talk about new initiatives at RTP, the biggest of which is two million square feet of office, retail, hotel and residential space, tentatively called “Park Center.”

Specifically, Park Center will consist of 1.1 million square feet of office, 185,000 square feet of retail, 13.5 acres of green space, 800 residential units and a hotel with 400 rooms, among other real estate.

“We’ll be moving dirt by the end of this year,” Levitan said.

Park Center is partially funded through a $20 million grant, as well as $10 million from taxes voted on in the district. At the end of the project, Levitan said Park Center will be sold. 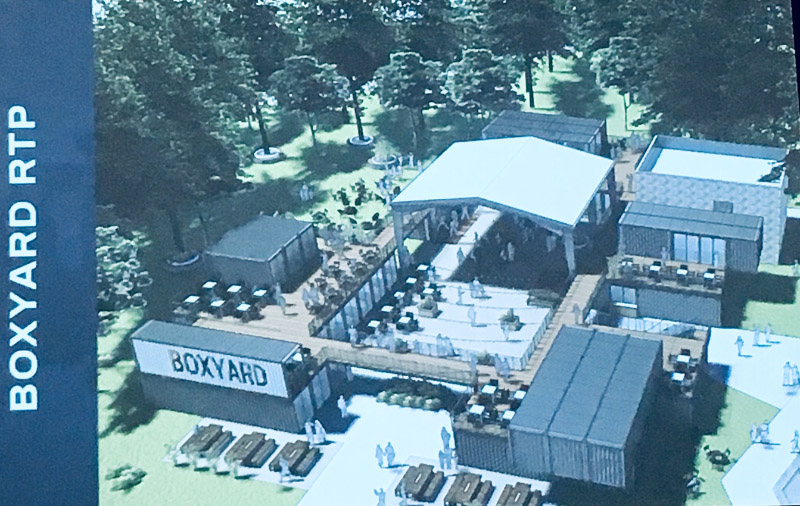 Other new developments in RTP include the Boxyard, a 15,000 square foot restaurant and shopping area made up of shipping containers stacked together. With the smaller size, Levitan said it can accommodate around 10 restaurants between 650 to 1,000 square feet each.

Levitan said there will be some experimental programs to see how Boxyard can fit in with the rest of RTP, including an intra-park electric taxi system.

“We’ll learn what works and what doesn’t work,” Levitan said.

The Boxyard has an estimated opening date of March 2020.

An ongoing project at RTP is the Frontier, as they continue to convert buildings previously used by IBM into new office and meeting spaces. The Frontier is close to 500,000 square feet of office and lab space and Levitan said there are more than 100 companies located there currently.

“This allows companies to retain in the Triangle,” Levitan said, citing office prices in Downtown Raleigh, Downtown Durham and Downtown Cary compared to prices in the Frontier

Levitan said 70 percent of the Frontier is currently leased.

Business in the Triangle

As part of the presentation to the Morrisville Chamber of Commerce, both Ryan Combs with the Research Triangle Regional Partnership and Chris Chung with the Economic Development Partnership of North Carolina spoke and answered questions about business development in both the Triangle and the state.

Chung talked at length about his role in attracting businesses, as well as tourism, to North Carolina. While the state has quality universities, amenities and other benefits, Chung said getting the word out about North Carolina is still critically important.

Similarly, Combs said that while RTP is known internationally, North Carolina itself is still relatively unknown.

“We still have a problem in Europe where people don’t know where North Carolina is,” Combs said. “We have our first European Union-led delegation trip to North Carolina coming up. Europe is pouring hundreds of millions of dollars into research and our universities could use that.”

The panel was asked about challenges in attracting and growing business in the area and Chung said, in part, the Triangle is a victim of its own success.

“How do we manage the growth that comes from our other successes?” Chung said. “How do we deal with the strain on our schools, transportation and social services?”

Combs added that when showing companies sites in the Triangle, he and his peers have a rule not to take people to RTP before 9 AM because of the high traffic. But Combs also said the Triangle is only getting a small fraction of money in taxes back that it pays in, specifically noting how Raleigh-Durham International Airport is getting a tenth of the money it needs for a new airstrip from the Federal Aviation Administration.

“I’m tired of seeing how much money we pay in tax that we don’t get back,” Combs said.

Outside of the Triangle, the panelists talked about the challenges in attracting businesses to rural counties. In many parts of the state, most of the things a business would need to be successful are there, but Chung and Combs said many companies only want areas they are familiar with, and Raleigh or Charlotte have more name recognition than Robeson or Cumberland County.

“When companies say they only want to go here, it ties our hands,” Combs said. “They also say they want an airport or want a certain size population.”

Chung said other problems for rural counties are a lack of infrastructure, lack of workforce education, young people leaving and a lack of access to healthcare and hospitals.

“We sit local companies down and ask what their biggest challenges are to growth,” Chung said. “Workforce is the biggest problem we’ve heard for the past few years.”

Overall, Chung said the best way for residents to help is not only to fund these partnerships but also to project a good image through their conduct.

“Whether you know it or not, you are ambassadors for North Carolina,” Chung said. “In business circles and social circles.” 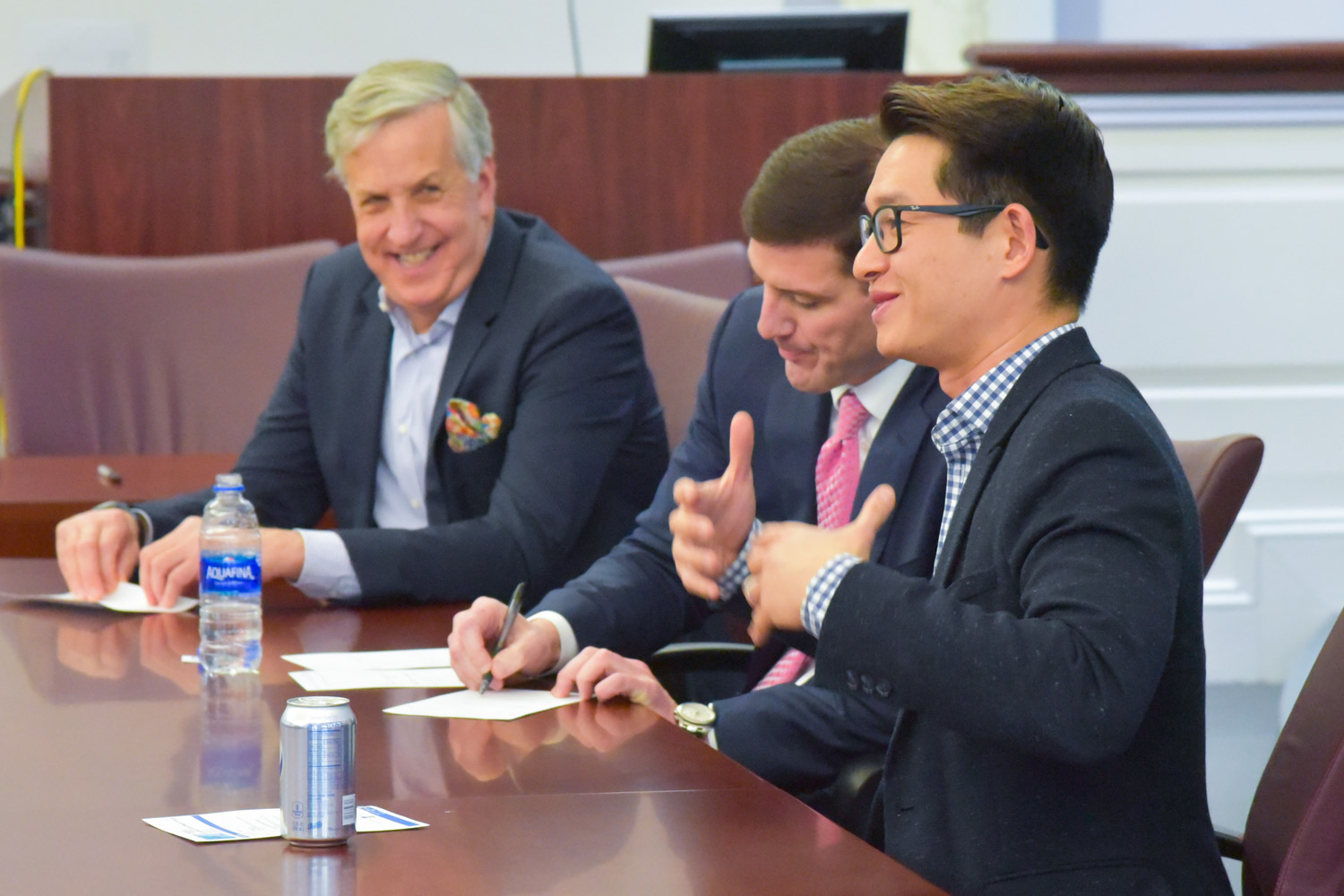