Cary, NC – On a beautiful nearly Spring day, the atmosphere both outside and inside the PNC Arena was reminiscent of the spring of 2006 when the Caniacs set the standard for tailgating at hockey games outside and earning the then-reputation of the loudest house in the NHL. The Canes were coming off a tough 3-0 loss to the Blue Jackets, the other team that’s in a Wildcard position while the Buffalo Sabres were waiting and resting in Raleigh, and needed these two points to solidify their wildcard position while also watching the scoreboard a little to see if they can inch up to the third spot in the east.

The Sabres were shut out in their past three games, the last two without their best player, Jack Eichel, who was suspended for a controversial hit that Eichel didn’t think was fair at all. Eichel is an elite player and with hockey as fast a game as it is, the margin of good vs. bad hit is always judged, as it should be, in favor of safety.

Former Canes player and fan favorite Jeff Skinner opened the scoring, ending a 14-game scoring drought, with just 2:18 gone in the first. Skinny came from behind the net and was just tossing the puck to the top of the crease not necessarily with the intent of scoring but to set the puck in the dirty area for a scrum. Curtis McElhinney put his stick along the ice but the puck banked in off the stick, as the stick appeared to hit a skate, not allowing CMac to get it in the right position. Skinny beamed with his famous Ipana smile that got both cheers and jeers from the Caniacs. He spent eight good years with the Canes and continues to have fans in the area that appreciate what he did for the Canes and respect for the elite scorer he is.

The Sabres continued to get off more shots on net than the Canes did for the next few shifts but finally the Canes started to take charge. By the middle of the period, the Sabres had six shots to the Canes’ three, but as each line took a breather, you could see coach Rod Brind’Amour leaning over explaining what tight checking and shooting means in his book.

The Canes proceeded to out shoot the Sabres 8-1 over the last half of the period. At the 13:52 mark, Brett Pesce, who had another outstanding game, had the puck on the near point making a cross ice pass to Jordan Martinook up high on the right. Marty took a stride and let go one of his harder slap shots that Linus Ullmark made the initial save but the puck was greased and trickled through his pads. Lucas Wallmark was in perfect position to the left of the goal for a rebound but seeing the puck settling behind Ullmark, lunged and swatted the puck in to tie the game. 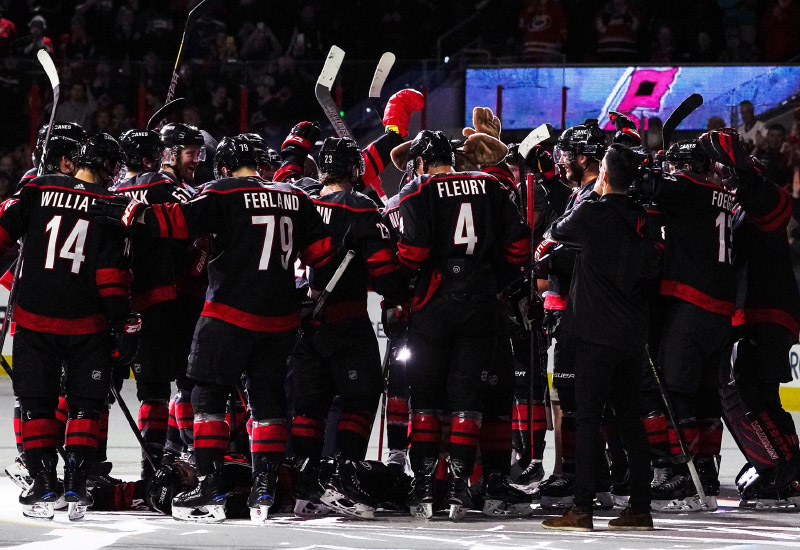 The second period was like the night before, completely dominated by the Canes but this night had a much different, and better, outcome. On their first shift of the period, Teuvo Teravainen kept control of the puck skating a complete circle in the O-zone while the lions were making a change.

After everyone settled in, Andrei Svechnikov has had a liking, and the strength, to stay in the dirty area of the crease. Turbo saw an opening and made a sharp pass to Svech who lifted the puck with finesse over Ullmark to put the Canes up by one. Shortly after the goal, Casey Nelson did what his teammates might have wanted but turned into a foolish event when he challenged Michael Ferland. I’m sure his intent was to rally his team but what he did was get on the losing end of a quick right hand by Ferland who probably didn’t want to tangle but won’t back down from anyone.

Late in the period, Nino Niederreiter did a great job holding on to the puck, eventually passing up to Justin Faulk. Faulker skated past one Sabre then passed over to Justin Williams along the far boards. El Nino was making a charge to the net so Willie sent a hard shot/pass that went right for the post. Fortunately, it was on the inside of the post and somehow managed to grease its way past Ullmark’s skate for Willie’s 21st of the season. Willie cocked his head after the goal, which was as good as saying sometimes young lucky.

The Canes played the third not in a turtle mode but were playing with the lead. Their shots on net were the lowest of the game but that was more planned as they wanted to keep possession and take only good shots. The Sabres, on the other hand, were shelling out a game high 17 shots, some requiring CMac to make some outstanding saves. A little over the 15 minute mark, Dougie Hamilton took the puck into the Sabres’ end.

Holding the puck for a moment, Hamilton passed to Ferland who made a pass to Jordan Staal just coming on for a line change. Staal held onto the puck skating to the mid slot then with his back to the goal let go a hard backhander that was still rising as it hit the back of the net for his 500th NHL point. The hard working Staal acknowledged the crowd after the announcement was made of that achievement. The Sabres’ Zemgus Girgensons scored with just 1:01 left as CMac was screened from the shot that was well out.

The win puts the Canes in a solid position for a Wildcard spot and within striking distance of third place in the Metro division. The Storm Surge had the Canes split up for a curling contest. Great game, great crowd, great win.

Next game is Tuesday, March 19, 2019 against the Penguins and the stakes are huge for where each team will wind up for the playoffs. Be there! 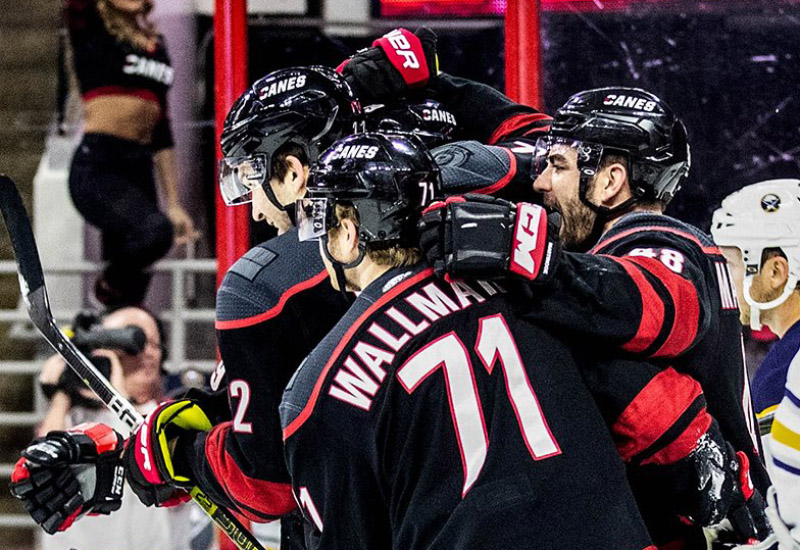