Cary, NC – Both the Carolina Hurricanes and Pittsburgh Penguins knew the criticality of this particular game as they were separated by just three points in the Playoff race. If the Canes win and that drops to just one point, they lose in regulation and they’re behind by five, which at this point in the season could be too large to overcome. As much as I don’t like three-point games, this one turned into that as the Canes did find a way to win with a 3-2 shootout victory.

The first period had the fans almost as tense as the players. The Penguins fans are normally loud and starting rally cries that typically get a prompt response from the Caniacs by drowning out the Penguins’ loyals with a Let’s Go Canes cheer. There was just one of those early on and even that was weak on both sides.

The Canes had their opportunities in Pens’ end but many were wasted on a few too many passes or dusting off the puck, allowing the Pens defense to do what they do very well and that is collapse in front of the net. Petr Mrazek had an outstanding period, on the way to being the #1 star of the game. Within a minute, he stopped Nick Bjustad on two shots that appeared to be sure goals. Mrazek’s anticipation of tip ins or cross grain shots was a thing of beauty for the Caniacs and frustration for the many Penguin fans in attendance.

The second line of Jordan Staal, Andrei Svechnikov and Teuvo Teravainen were the Canes best line in the first. Their shift midway in the period almost got the Canes on the boards when Svech not once but twice set up Staal for great opportunities they were stopped withgreat saves by Matt Murray. 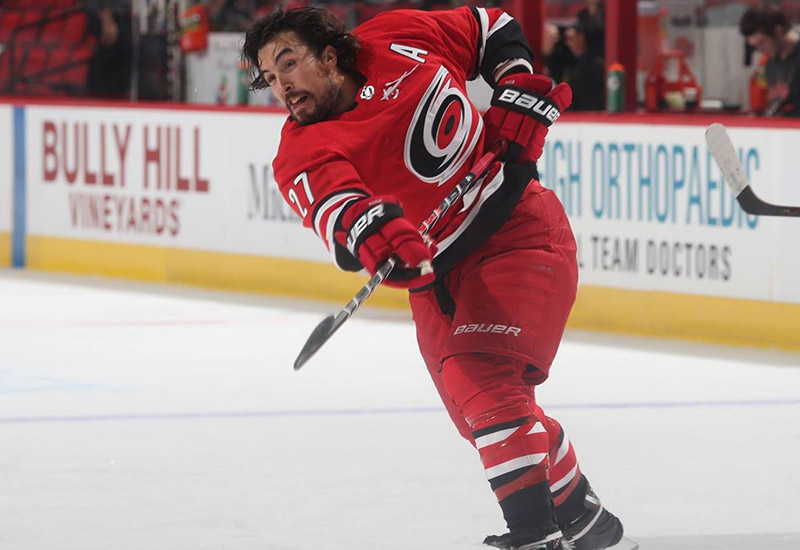 The game opened a little bit in the second and the crowd responded accordingly. Both goalies were still having All Star-caliber games with Mrazek being the one tested more but still had the answers. The Canes’ shot selection was possibly too picky early in the period but was noticeably changed as the period and game went on. Midway in the period, Justin Faulk got possession of the puck in the center zone, carrying the puck over the Pens’ blue line.

Two defenders started towards Faulker who saw Brock McGinn enter the zone, fresh off a line change, fed a nice saucer pass on McGinn’s tape who took a stride, got to the wing’s position on the faceoff circle sending one past Murray high blocker side. The Pens answered in less than a minute when Sidney Crosby fed a pass to Jake Guentzel on the left point, sending a slap shot into traffic that somehow missed everyone and got passed Mrazek as he was screened. There were two sets of offsetting penalties in the period which through a Caniacs’s eyes may have seen wrong.

The first was a high stick called on Justin Williams but it was a Penguins stick that hit Willie’s stick that then did hit a Penguin. The other was when Bryan Rust took out Brett Pesce on an interference check that sent Pesce flying but in the process of getting twisted had his stick hit Rust in the visor. By the book, a penalty, by common sense…

Right after Sebastian Aho was interfered in the Pens end (or so it seemed as there was no call), the Pens took advantage of too many Canes left behind in the Pens’ end. Guentzel carried the puck down the ice for a three-on-two, passing over to Rust with a quick passed to Kris Letang, his first game back after another injury, to tap it in for a pretty goal and a 2-1 Pittsburgh lead. Later in the period, Faulk got called for a weak interference call on a non-critical play but the Canes defense, lead by Mrazek, held strong.

The Pens were keeping their feet on the gas as they sent a game high 18 shots on net during the period to the Canes 14, also their game high. With under three minutes to go, Rod Brind’Amour made the decision to pull Mrazek and call a timeout for a set play. Everything worked as planned as Aho won the faceoff, passed over to Nino Niederreiter along the far boards. El Nino passed up to Dougie Hamilton, who had a fantastic game, with Hamilton sending his game his seventh shot on net. With the puck bouncing around, Willie was Johnny on the spot as he snared th loose change in to tie the game with a little over two minutes to play.

Late in the period, the Canes got their first powerplay of the game that eventually ran into the overtime. Not capitalizing on the extra man, this had the team’s eventually going to the normal 3-on-3. The Canes were both the more aggressive and better team in the OT. With 2:07 remaining, Aho got a breakaway but nearly had his hand cut off with a viscous slash by Letang. Not only did he get two minutes, Latang got a game misconduct possibly for the intent of the slash or some choice words for ref Brad Watson, who is retiring on Sunday. Doubtful his words were “Have a nice retirement.”

Hamilton started the shootout and scored on a nifty shot. Mrazek and his active stick shut down all three Penguin shooters for a rare shootout win and getting two needed points in the standings. Maybe planned, but the Storm Surge was both appropriate and entertaining as the Canes went duck hunting, which was really funny. Kudos who thought that one. 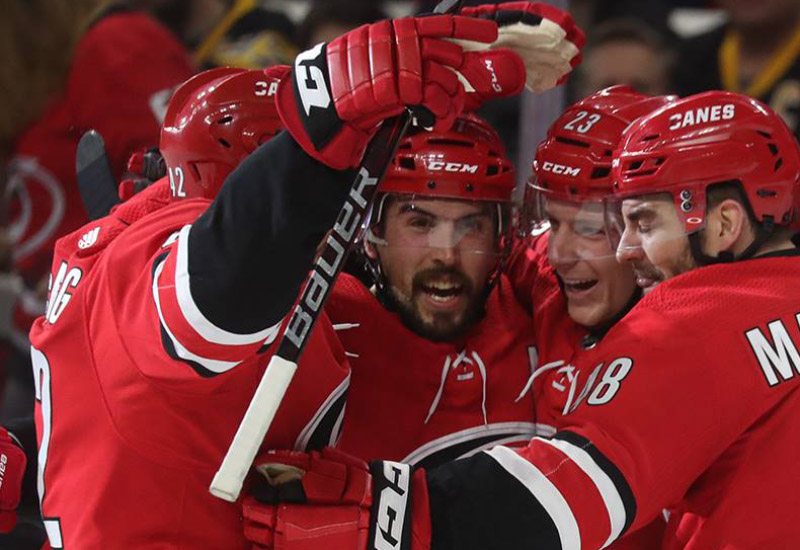