Cary, NC – For the second game in a row against Tampa Bay, the Canes entered the third period leading the Lightning but eventually lost against a very powerful team that plays a full 60 minutes each and every game.

Tampa Bay is so strong in all facets of the game, they have three #1 forwards, the best overall defenseman in the league and the best goalie and backup tandem the league has seen in years. They’re tops in the league in power plays, overall goals, powerplay goals, defense, penalty kills and appears to have more set plays than any other team.

The fourth line has 38 goals which has to lead the league and is just three goals less than the Canes third line. No shame for the Hurricanes as they battled all game long, came back from an early deficit to take the lead and not fall behind until early in the third.

Niederreiter, Hamilton Give Canes The Lead

One of the Lightning’s many All Stars, Steve Stamkos, opened the scoring at 3:20 on a powerplay shot that had the PK team of the Canes all bunched up on the near side leaving Stamkos all along 12 feet in front of Curtis McElhinney so he could pick his spot and rifle a howitzer for the early lead. Midway in the period, the Bolts were clearing the puck in their end, Justin Williams got away with a slash on a defender’s stick, allowing Sebastian Aho to steal the puck passing up to Nino Niederreiter on the left point who took a quick slap shot at the goal hitting the knob of goalie Louis Domingue’s stick before going in the net.

Ninety seconds later, rookie Andrei Svechnikov made a power move along the far boards dropping his shoulder and making a cut to the net. The shot was blocked but Dougie Hamilton was in the right position at the right time for a sweet rebound, settled the puck and put it in to put the Canes up by one. Late in the period, Jordan Staal was battling with a defender when Yanni Gourde hit Staal smack in the head sending the big guy down grabbing his head before he hit the ice. Staal is back just six games after being out well over 30 for his second concussion of the season.

Gourde got a match penalty but after the 4-on-4 expired, the Canes could not get a powerplay goal with the extra three minutes on the penalty. Gourde will get at least a two-game suspension for the hit.

Good news is, Staal returned in the second which means he passed the Dark Room, which is what players call the concussion protocol process. A little over six minutes gone, Brett Pesce stole the puck in his end, trying to make a break out but ran into two forecheckers so he passed over to Teuvo Teravainen still in the Canes’ zone.

Turbo held the puck for a play to get organized and passed to Staal in the neutral zone just before the Bolts’ blue line. Who knew Staal had the speed that kicked in as he blew by his defender going straight for the net? Just as he got to the net he faked going right that sent Domingue sliding leaving the net open that Staal slammed the puck in for a statement and a loud roar. That goal got the Caniacs into the game as a two-goal lead on the mighty Bolts that lasted through the end of the period was significant. 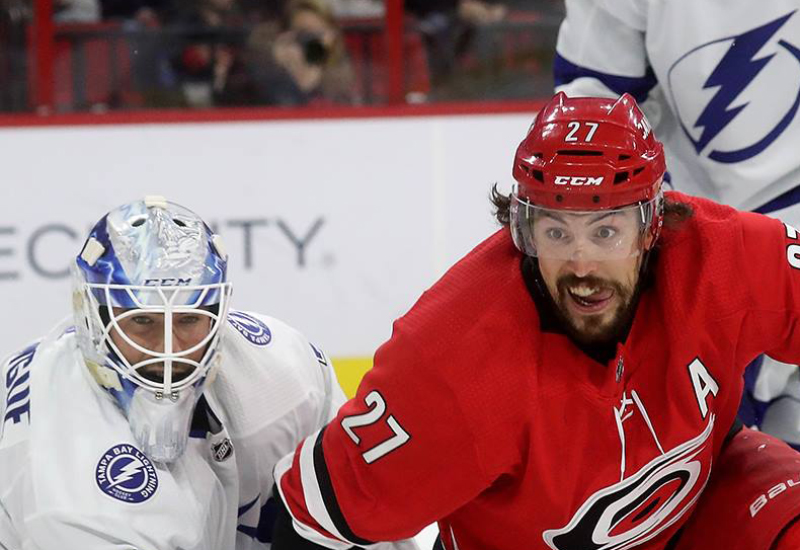 Both teams were on win streaks: the Canes have won two in a row while the Bolts’ six-game streak was in jeopardy. The Bolts wasted no time in evening the score as Stamkos skated almost at will at the top of the Canes zone with Anthony Cirelli getting ahead of Turbo for a tip in. Midway in the period Victor Hedman, arguably the best defenseman in the league, had the puck on the right point skating over to the left. Just as he started to skated to the left, Ryan Callahan circled then went to the low right side of the crease for a set tip in play that was beautifully executed.

Brayden Point, who not surprisingly leads the Bolts in goals added to his lead off another pretty setup by Stamkos. The Bolts added an empty netter to close the scoring.

The final score of 6-3 doesn’t tell the real story. CMac played a good game in goal but it was the quicker and stronger Bolt offense that got around the Canes’ defense and forecheckers in the Canes’ zone. The Canes’ defense was solid and most Bolt goals were off players guarded by the Canes’ forwards. The Bolt forwards reminds me of my son when he was young: perpetual motion, always moving, never in one spot for even a second, wearing out anyone trying to look after him.

Eventually there is a let down and the Bolts’ forwards took advantage of them, just like my son did 35 years ago. The Bolts swept the three games against the two natural disaster teams in the East and they have to be odds-on favorites to win the Stanley Cup. Playoffs are a whole new season and every team rises to the occasion but wow, this is a very good team.

Next game is Saturday March 23 against Eric Staal, Victor Rask and the Minnesota Wild and is the last Home Grown Series game of the season. Be there!