Cary, NC – This game meant so much for both teams for making the playoffs: the Canes needed the two points to ensure they stay in the top Wildcard spot; for the Flyers, if they lose, their playoff hopes are extinguished.

The parking lot had the tailgaters grilling and enjoying the perfect afternoon, with fans from both teams having a good time predicting the outcome. After falling behind on an early Claude Giroux goal, the Canes responded with a solid 5-2 win in front of a nearly sellout crowd. 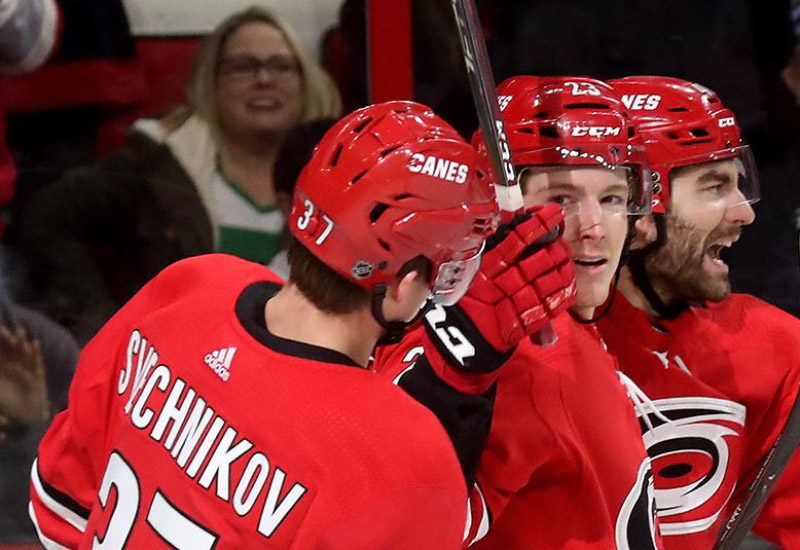 While the beginning of the game lacked the intensity both coaches would have preferred, the Canes did have a slight edge on being the more aggressive team early in the contest. The shots by each team came in waves, with the Canes getting off the first three, then the Flyers woke up putting the next six on Petr Mrazek. The Flyers’ first shot had “Goal” written all over it but Mrazek brought his A game making his first of several great saves.

The Flyers opened the scoring at the 12:05 mark with a play starting in their own zone. Andrei Svechnikov carried the puck into the Flyers’ zone but made a bad pass across the grain that was intercepted and tipped forward by James van Riemsdyk who flipped the puck to the neutral zone to Corbin Knight. With only Jaccob Slavin back on defense, Knight went up the right side with Giroux on the left, waited long enough for Slavin to commit then passed over to Giroux for the tip in.

The Canes answered back 90 seconds later with a flurry on shots that had seven skaters in front of Cam Talbot’s crease while the Canes had a powerplay. With the mass of humanity hacking and whacking at the puck, Teuvo Teravainen took his turn and managed to put it in to tie the game. Just 21 seconds on a similar play with the second line on the ice, Slavin carried the puck in the Flyers zone on the left side sending a hard pass to the center. Brock McGinn took a shot with the rebound going right to Jordan Staal for a second shot with that rebound going over to Dougie Hamilton racing in from the right and slamming the puck home for his 16th of the season and 14th in 2019.

The second period had everyone in the PNC Arena wondering where the intensity went. While the Canes could hold on for the 2-1 win, with so much at stake, both teams had to change their game plans as cautious couldn’t have been what each coach drew up in between periods. Give both goalies credit, as they were perfect in the second but most shots were routine shots with very few grade A chances.

The most animation in the period was when Justin Williams was called for interference. Maybe Willie was still thinking of the Storm Surge March Madness celebration as he made a clear pick on his friend Giroux, but got incensed with the call so much so the linesman had to step in between Willie and the ref while going to the sin bin. Maybe on a game with so much importance or because it wasn’t a severe interference that had a great effect on the play was what had Willie so mad. Or knowing his personality, it was the leader in him showing his teammates it was time to get back in the game. The Canes PK team did a masterful job on the kill and Willie was talkative when back on the bench thanking each player while probably saying what needed to be done on the ice. 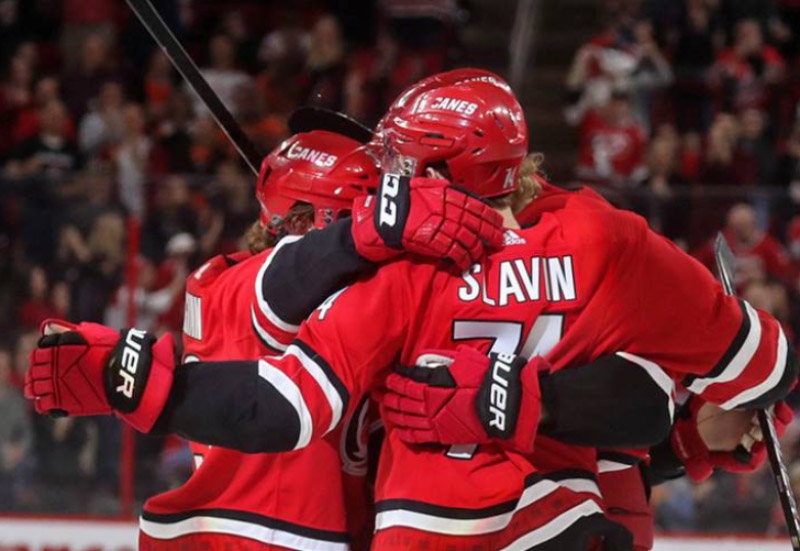 Both coaches had to lay it on the line during the second intermission, saying the next 20 minutes could decide if golfing starts early or late. The Flyers heard their message loud and clear as they showed more aggression from the first drop of the puck in the period forcing Mrazek to make several key saves. A big difference in the Canes’ goalies is when Mrazek makes a big save, especially when play starts up ice, he’s fist pumping and yelling, when Curtis McElhinney make a big save and play is headed up ice, he simply stands erect, takes a breath and relaxes.

The Canes got another powerplay just over midway in the period when Nino Niederreiter got crosschecked in the Flyers’ zone. The Canes’ first powerplay unit was on the ice with Sebastian Aho winning a draw back to Turbo. Turbo held the puck waiting for Justin Faulk to get in the high slot, made the pass allowing Faulker to slap home a cannon that nearly wen through the net, giving the Canes their second powerplay goal of the night and a cushion 3-1 lead.

That goal proved important as Oscar Lindblom scored a powerplay goal for the Flyers less than two minutes later. Shortly after that, Willie got called for another penalty – this time it was a trip in his offensive end. The play could have been a non-call but it was right next to the Flyers’ bench and not saying anyone was intimidated but all penalties all game were called by just one ref. This penalty was called by the far ref while the ref within 10 feet of the play was motionless. The Flyers went all in as they pulled Talbot for the extra skater.

The Canes had the opportunity to put the game away as with being a man down they could send the puck up ice and not worry about icing. Slavin got the puck right a the kick plate of the back boards sending a long high shot that squeezed inside the right post for a shorthanded goal. A little over a minute later, when both teams at full strength, the Flyers pulled the goalie again. This time it was McGinn, (still love the way the announcer says his name) who had a great game, winning a puck along the boards, turned and made a 180-foot shot to seal the win. While Captain Williams sent a tweet saying there would be no more Storm Surges, the team did the same as the original but without the skol clapping.

Last home game of the regular season is Thursday, April 4, 2019 against the NJ Devils, on what should be a very exciting time as the playoffs are right around the corner. Be there!

NCFC Remain Undefeated with Draw Against Charleston
Scroll to top