Washington, DC –Mr. Game 7, aka Justin Williams, had another huge Game 7 when with just over 11 minutes gone, he won a battle along the boards and just flung the puck to the net hoping for the best. Brock McGinn muscled in for a position in front of the net and tapped in the overtime game winner to send the Hurricanes to Round Two against the Islanders. It was the second game in a row the Canes came from behind and first game in this series the home team did not win.

Not The Start Brind’Amour Wanted

For the fourth straight game on their home ice, the Capitals scored the first goal, and up to this point, have not lost a game as that first goal, especially on home ice, gets the crowd really into the game which always gives the home team a boost. The Caps were attacking in the Canes’ end when it appeared the Canes were gaining possession for a clear, but a miscue on communications of who was going where and doing what resulted in a costly turnover.

Andre Burakovsky snatched the puck in the corner and stick handled untouched to the front of Petr Mrazek and had an easy decision, pass to two open players or pick a corner and shoot. He chose his shot and found the corner to put the Caps up with just over two minutes gone. Not long afterwards, Alex Ovechkin made two great moves to get around Dougie Hamilton, setting up Tom Wilson for another goal taking advantage of another Cane mistake. All teams make mistakes every game, good teams take advantage of opposing mistakes, better teams make up for mistakes.

The Canes did not have a great first period and in the words of coach Rod Brind’Amour, “they were playing like crap,” and Roddy would be addressing that during the first intermission. Based on their play in the first, a minor victory would be to be entering the locker room down by just two. 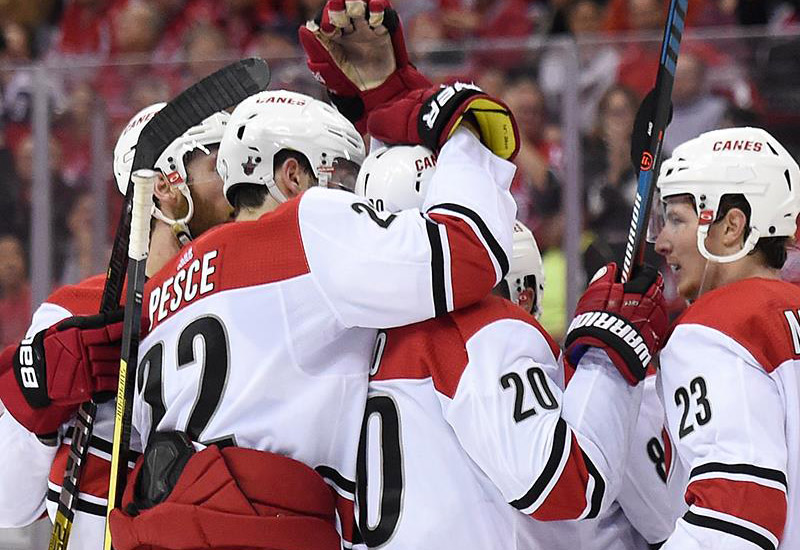 Aho, Teravainen Get Canes Back In Game

Whatever was said during the intermission sunk in, as this team has no superstars they could count on for some dramatic individual or tandem effort to pull them out of the hole they were in. There are only two players who ended in the top 20 that are on teams still in the playoffs and Sebastian Aho, the Canes’ leading scorer is ranked as 40th in the league for goals while 21st overall in points. All that means is the Canes, one of just eight teams still play hockey rather than golf, relies on every player to play for each other.

Speaking of Seabass, he got the Canes on the board in a stunning fashion. With the Caps on a powerplay, Brett Pesce had the puck deep in the Canes end, saw Seabass open in the neutral zone sending the pass up for either extra time to kill but had Teuvo Teravainen join on the right for a rush to the net. As Aho approached the net, he saw Turbo getting tied up so he shot using his defender as a partial screen. Braden Holtby slapped at the puck with the glove as he had no time to react for a catch.

With the puck coming straight back, Seabass knocked in his own rebound along the ice under the pads to silence the partial crowd for the only shorthanded goal in the series. A few minutes later, with the Canes in the Caps’ end, Pesce pinched along the near boards, got tripped up giving the Caps a 3-on-1 with Justin Faulk the lone defender and Evgeny Kuznetzov potting his first of the playoffs to put the Caps back up by two.

Late in the period, Brock McGinn, who deservedly earned the first star of the game, passed up to Pesce on the right point. Pesce saw both Turbo and Aho in the slot area so he made pass to the center. Seabass was tied up and let the puck slide between his legs to Turbo who caught the pass with his back to the net, in one motion took a stride forward turning around and shooting that caught Holtby off guard to get the Canes back within one. The crowd could sense this no-big-name team wasn’t going away without a fight.

The Canes continued their grit and hard play in the third as the tide was turning for the Canes. Their speed picked up, checks and forechecking got better and Mrazek stopped what little the Caps threw at him. A few seconds before the three minute mark, Jaccob Slavin, playing another stellar game, calmly got possession in his end, saw Jordan Staal along the boards in the neutral zone and made the long pass to the big guy. Staal skated in and from the exact same spot his brother scored against Martin Brodeur in the playoffs years ago, sent a shot past Holtby far side to tie the game and more so, take the crowd out of the game.

The Canes dominated play the rest of the period finding some renewed energy in keeping Ovi, Backstrom, Wilson and the rest of the big names the announcers love to talk about in check. Late in the period, the Caps were pressing hard with a flurry of shots in close. Mrazek was looking like a crazy person with his legs and arms fluttering everywhere, making stops that were unreal. Just as he went down the puck slithered behind him but Ginner made a diving slide with his stick extended to knock the puck to the corner. The Canes continued the domination of play into the first overtime getting off 11 shots while the Caps were able to muster only four.

As is all too often, the refs swallowed their whistles during the OT with a few obvious penalties not called, one being the holding of Saku Maenalanen’s stick right at the Caps goal but none tops the obvious delay of game when the Caps cleared the puck over the glass from their D-zone and all four officials met to discuss how they can give the call for the NBC favorite team. Simple: just say the player was over the blue line. Bad no call.

To double down, early in the second OT, Maenalanen did the same infraction but was called for the only penalty of overtime. The Canes killed that penalty again silencing the crowd that could sense the game was getting out of the defending Cup winners grasp.

That leads to the 11 minute mark when yet another favorite fell to a wild card team. Slavin gets the puck on the far sides ends it hard around the back of the net where Mr. Game 7 digs it out and just flings it with authority to the dirty area where Ginner is for the heroic tip in to send the Canes into Round Two.

Next up are the Islanders starting Friday in Brooklyn. They play at home in the PNC Arena on Wednesday, May 1, 2019. 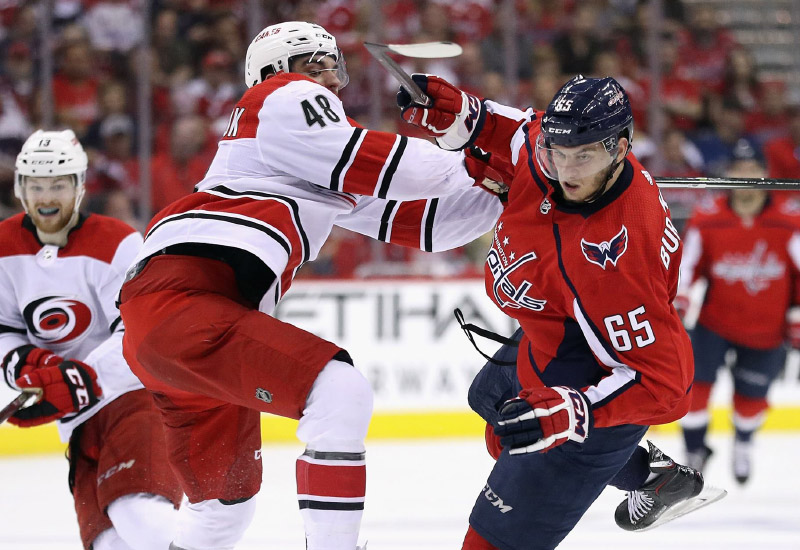