Cary, NC – The Carolina Hurricanes took one big step to getting to the Conference finals with a 5-2 win over the NY Islanders in front of over 19,000 at the loudest house in the NHL, the PNC Arena. The game was much tighter than the score as the Canes scored two late open net goals.

The Canes never trailed during the contest, with the Islanders quickly answering goals after the Canes’ first two scores, but the Canes were in a shutdown mode after Justin Williams scored what turned out to be the game winner midway in the third.

There’s no other way to describe the atmosphere inside the arena but the place was electric. The Caniacs came in force and it was a noticeable lower difference in the number of Islander fans at this game than from regular season games. Could be that the Caniacs got every ticket available, could be the Caniacs were more vocal and they certainly were or could be some relocated Islanders fans made the switch to support the home team.

Both Jordan Martinook and Andrei Svechnikov were game time decisions for playing with both being out for three and six games respectively due to injuries. During warm-ups, both looked good and Coach Rod Brind’Amour chose to have both play. Being up two games to zero in the series, Roddy would only play them if they were 100 percent. The Islanders have been killing it in the face-off circle and again won the opening faceoff against the line of Marty, Greg McKegg, who had his best game of the playoffs, and Patrick Brown.

Curtis McElhinney started in net for the Canes and broke a NHL record for being the oldest goalie to start his first playoff game. The Canes were able to cash in on the forechecking efforts of the second line line of Jordan Staal, Nino Niederreiter and Teuvo Teravainen deep in the Isles’ end. Staal used his size to win a battle for the puck sending it up to Dougie Hamilton. Hamilton got a quick pass to Jaccob Slavin on the left point who made a hard pass to Turbo camped out on the left side of the goal. The puck hit Turbo’s skate but he was quick to nudge the puck forward a tad so he could swipe it in for the early 1-0 lead.

Warren Foegele got called for an errant high sticking call deep in the offensive zone, giving the Islanders a powerplay. The Canes’ defense was solid thwarting every shot, but just couldn’t get the puck over the blue line. Devon Towes’ shot from the midpoint of the high slot went in as CMac was screened by four players in the lane. 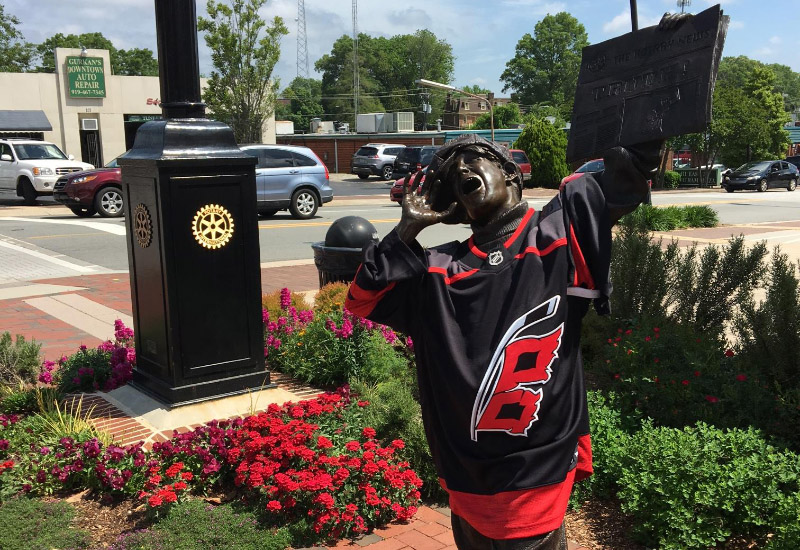 The longer any series goes, the more you see chipiness between players. Brock McGinn, never one to back down or walk away, was going at it with Nick Leddy several times behind the play as were other pairings from time to time. At the 13 minute mark of the third period, Sebastian Aho, who has not been himself throughout the playoffs, made a stellar play that avoided a goal when he backchecked on a play that had goal written all over it. He may be playing with some undisclosed ailment but that play, while not making any score sheet was a great play.

Later in the period, the Canes had a great sequence of passing that results in Justin Williams being fed a beauty of a pass from Brett Pesce that looked like a sure goal but the quick shot went wide. Justin Faulk got beat on a play by Brock Nelson then made a wise decision to hook Nelson. The Canes’ defense was strong on the kill and with a second left in the penalty, Foegele was inside the Canes’ blue line to clear the puck with a high lob. Timing was everything as the air time allowed Faulker to exit the box, snare the puck in the air, drop it to his stick and went in on Robin Lehner with speed, going forehand, backhand then lifting the puck into the net to give the Canes a 2-1 lead. Faulker, who is usually somewhat emotionless after a goal, exploded into a frenzy with his first ever playoff goal.

The Isles weren’t going away easily and bounced back again a short time, the Canes gained the lead. After the Canes lost the puck in the Isles end, Tom Kuhnhackl carried the puck into the Canes’ end. Slavin tipped the puck up to Foegele who couldn’t clear the puck, Willie also flubbed a clear attempt that Josh Bailey picked up and used Hamilton as a screen and sent one past CMac to again tie the score.

The Canes’ play picked up in the third, much to the credit of the Caniacs as the place was as loud as any of the playoff games ever played in the PNC Arena. The refs once again swallowed their whistles in the third and the slashing to the legs, holding of sweaters or grabbing opposing sticks increased even though no penalties were called in the period.

Just over midway in the period, Lehrer attempted to clear the puck high along the back boards when Seabass made an incredible swat of the puck while in the air dropping it to his stick, sent a smooth pass to the slot as Willie was charging a half stride in front of his defender. Willie didn’t hit the puck clean but that worked out well as it lofted over Lehners glove to put the Canes up by one with the Caniacs breaking the sound barrier.

Turbo added an empty netter, assisted by Pesce and Slaving who added to his franchise record of assists in a playoff as well as the the NHL playoff assist lead. Seabass closed out the scoring with a second empty netter and let’s hope that easy goal gets him back on his horse.

Canes can sweep the series on Friday, May 3 at 7 PM. Be there. 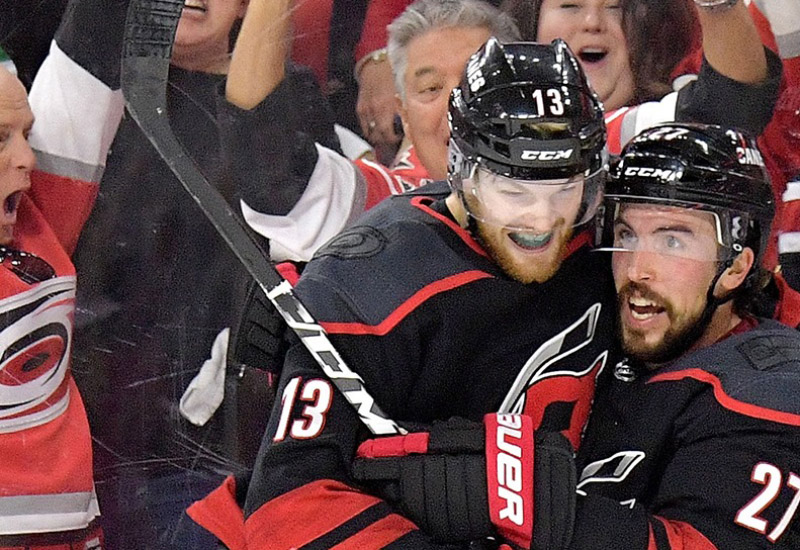