Cary, NC – For the first time in franchise history, the Carolina Hurricanes won a four-game sweep in the playoffs, with a solid, team effort 5-2 win over the New York Islanders in front of a record PNC Arena crowd of 19,495 crazed Caniacs. They did win a three-game sweep back in the Whalers days when the first round was best three out of five. This was also the first time in decades when a team that swept one round got swept in the next round.

Islander coach, one of the best in sports, Barry Trotz changed every line with the hope and message that things had to change while Canes coach Rod Brind’Amour kept his lines together as why change a good thing. 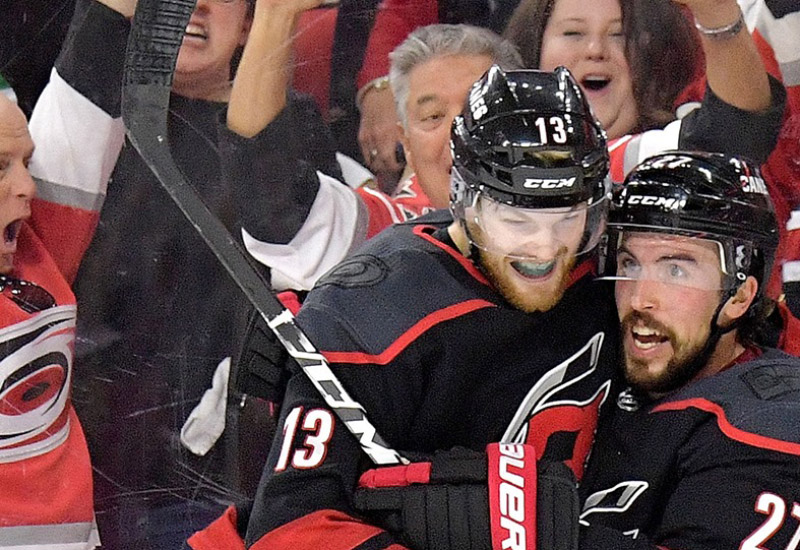 The Islanders were in effect, playing their Game Seven and started the game playing that way, as they were pouncing on the puck early. Rookie Andrei Svechnikov once again got called for a high sticking infraction which could have easily been called for hooking. With his impressive resume, as well as his history of too many penalties in Juniors, as he’s found all season, he’s not going to get any slack from officials. I can’t help but think Roddy is fine with the tight calls, as these are hard lessons that Roddy will go over and over again with film reviews.

The Islanders spent too much time in the Canes’ end on the powerplay, and while the Canes’ defense was strong, too much time without a clear usually spells trouble. Curtis McElhinney was again starting in goal and made a good save off Devon Towes but sniper Mathew Barzal was camped out on the right and managed to stuff the puck in for the early 1-0 lead. Just 90 seconds later, the Canes got their first powerplay when Leo Komarov used poor judgement and cross checked Justin Williams right in front of the Isles’ bench and worse, was far behind the play.

As poor as the Canes’ powerplay has been throughout the playoffs, converting this one would be a great response to the Isles’ early lead. The Canes wasted little time in answering as Willie passed up to Justin Faulk at the top of the umbrella. Faulker skated right, passing over to Sebastian Aho. Seabass had Teuvo Teravainen down low and passed while switching positions. Turbo went above the faceoff circle, passing back to Seabass who took a quick shot.

Isle goalie Robin Lehner couldn’t get a handle on the puck when Seabass smacked in the loose change for the equalizer. The Islanders didn’t fold and dug deep as all good teams do. After thwarting a Canes attack, they had a text book 2-on-1 breakaway with Jaccob Slavin the lone defender making an unbelievable stick check sending the puck into the netting.

The Canes’ defensive game was stellar as the Isles had trouble making two consecutive passes which had to be frustrating. Frustrations in hockey frequently lead to chipiness and it was becoming more prominent as the game progressed. Brock McGinn made what had to be the hardest, legal, check of the series, a 6.2 on the Richter scale, when he sent Nick Leddy into next week. The Isles used that as a message this Bunch Of Jerks was for real and while they continued to follow through on their checks, they were polite checks. Late in the period, rookies Svech and Lucas Wallmark had a great give and go that while did not result in a score may be a sight to be seen often in the future.

Teravainen, McKegg and Williams All But Seal the Win

The Canes could not have played a better period than they did in the second sending the SRO crowd into a frenzy as they knew, with normal defense, they had this game. Early in the period, with the puck in the Isles’ end, the Canes were in the middle of a line change. Seabass had the puck low, passing up to Warren Foegele just as he hit the ice entering the zone, Foegele saw Turbo left all alone on Lehner’s left and made a Hainsey hard type pass to Turbo who slammed the puck in for the Canes’ lead and they never looked back.

One shift later, the fourth line was doing their energy thing, with Jordan Martinook passing up to Brett Pesce. Pesce took a hard slap shot from the point that Lehner blocked with the chest protector but couldn’t corral the puck. Greg McKegg was in the right position, saw the puck hit the ice and swiped it into the goal for a quick 3-1 lead raising the decibel level to ear shattering.

Just under the nine minute mark, Nino Niederreiter carried the puck from the far corner, around the horn then lost an edge but was able to swat the puck while on his back. Both Jordan Staal and Willie went for the puck with Staal grabbing it and going low. Willie went to the dirty area of the crease and just as he got there, Staal lifted a puck that Willie was able to get a backhander in to put the Canes up by three, which was his 100th career playoff point, that he made look like it was just another day at the office.

The reception the Canes got as they entered the ice for the third period was record setting. The Caniacs started yelling “Sweep” and some started a better call “We Want The Cup.” Shortly, the Wave would start as the Caniacs wanted the next 20 minutes to celebrate in every way they knew how. The Canes’ forechecking was stifling and had to be frustrating for the Isles.

As much as everyone on the ice were professionals, the body language of both teams showed. There was mutual respect by and for both teams, while the heaving hitting all but ended, the effort to score still existed. At he 15:13 mark, Faulker had the puck in the Isles’ end when he made a pretty saucer pass to Svech as he had speed entering the zone. Svech gained control and calmly picked the far low corner to send a slick wrister in to close out the Canes scoring.

CMac was on his game and played fantastic but no doubt would want another attempt at last shot taken by Brock Nelson. Nelson skated into the Canes’ end on the right, went to the middle then sent a wrister from 40 feet that handcuffed CMac trickling in after hitting his glove. Give Nelson and the Isles credit for playing until the last whistle. During the classy NHL tradition of the handshake, Trotz talked to Slavin for about 30 seconds probably telling him of his outstanding play.

I had the opportunity to meet a seasoned broadcaster from Montreal, who said Raleigh is his favorite place to visit and understands why this is a place all players like to play. He couldn’t speak highly enough about the weather (duh), the people, the amenities, the neighborhoods, the enthusiasm of the Caniacs and said the Bunch of Jerks moniker was a great thing that all NHL teams are talking about in a positive way.

The Canes’ sweep of the series allows the team to mend all the ailments and with Roddy as head coach, the odds they will have any rust while waiting for their opponent for the conference championship is small. As remote of a possibility most thought during the push to make the playoffs, if Columbus wins the series against Boston, the Canes will have the home ice advantage. 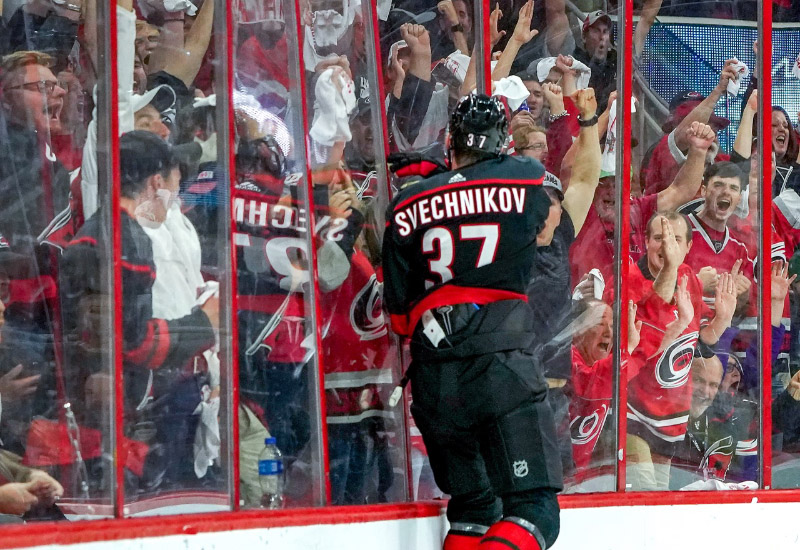