Cary, NC – The North Carolina Courage remain undefeated this season but drop in the rankings with a scoreless draw against Sky Blue FC this weekend.

Fans at the Saturday, May 4, 2019 game at Sahlen’s Stadium at WakeMed Soccer Park saw a much longer game than typical as heavy rain and lightning delayed the match in the second half.

But in that first half of gameplay, the Courage battered Sky Blue relentlessly but were never able to come out on top. All hands were on deck, with defenders Merritt Mathias and Jaelene Hinkle opening up scoring opportunities all around the box and both Lynn Williams and Debinha coming very close with big shots. Unfortunately for the home team, none of these made it into the net.

For context, in the first half of the game, the Courage had 16 shots on goal and Sky Blue had four.

Inclement weather delayed the game until 9:45 PM not long after the second half started, but when the Courage returned, you would have never known they had to wait through the storm. Debinha was back to her fast play style and narrowly missed the net in the 58th minute. New player Leah Pruitt came with similar energy but was also unable to make a goal.

Then, at the 79th minute, it looked like the Courage’s chance was finally here. Both Williams and Skye Blue goalkeeper Kailen Sheridan got the ball at the same time. After briefly wrestling for it, Williams got the ball free and was poised to make a game-winning shot, but other players came in close and she was unable to capitalize. 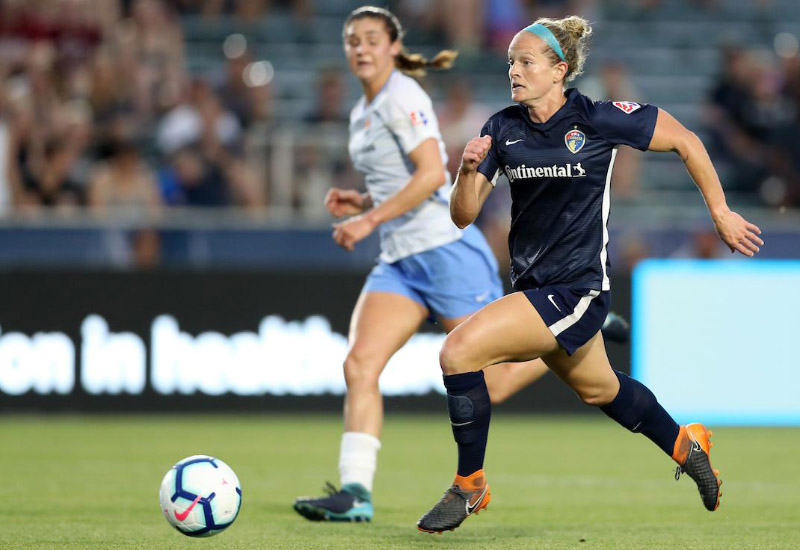 Sky Blue FC is one of the lowest ranked teams in the league so far, with no wins this season, and the North Carolina Courage appeared to outplay them but were unable to make it work.

“We bombarded Sky Blue for 25 minutes after the rain out,” said Courage Head Coach Paul Riley. “I thought during that time we would get a goal, but the ball never really bounced our way at that end of the field. That being said, I was happy with our performance overall.”

This game also saw the Courage play without Abby Dahlkemper, Crystal Dunn, Jessica McDonald or Sam Mewis, as they are part of the United States’ roster for the FIFA Women’s World Cup.

The Courage have not lost a game this season so far, but there are two other teams with that distinction now, including their rival team Portland Thorns FC. The other team with no losses, the Utah Royals, is now the top ranked team in the league with three wins and no draws or losses. However, the Royals have also played one fewer game than the Courage so this skews the points somewhat.

And the Courage will get their chance to rectify that as they play the Utah Royals at their next home game on Sunday, May 19, 2019 at 5 PM.