Cary, NC – Gas prices tend to get higher in the Summer but prices are climbing particularly fast this year, and by the start of June, Cary drivers may be facing the highest prices in at least the last five years.

Gas prices in the Cary-Raleigh area have been fluctuating over the past month. The current average price in the metropolitan area is $2.712 per gallon, up from $2.638 per gallon a month ago.

Wake County is in the median when it comes to gas prices state-wide and North Carolina as a whole has lower prices than the national average, at $2.687 per gallon. In fact, the lowest gas prices around the country are primarily in the South, though North Carolina, Georgia and Florida all have higher average gas prices than all other Southern states. 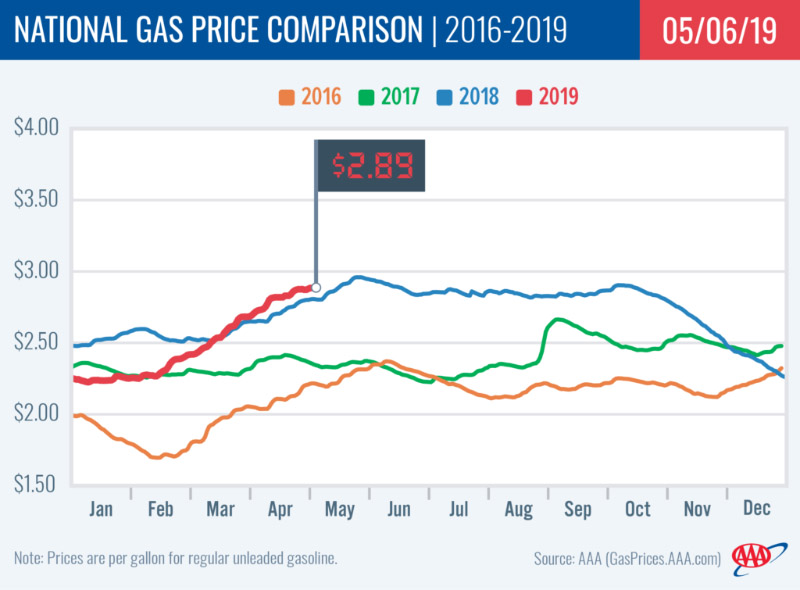 “While gasoline demand remains robust, gasoline inventories built for the first time since early February, which was a surprise, and contributed toward the national average only increasing by a penny,” said Jeanette Casselano, AAA spokesperson. “Today’s average is just eight cents cheaper than the highest pump price of 2019, which was set going into Memorial Day.”

At this rate, we could easily see the highest gas prices in the past several years by the start of Summer nationwide, and some equally high prices here in Cary.

Still, this is nowhere near the historic highest prices for Cary drivers, when the average prices was more than $4 back in September 2008.

In the Summer months, gas prices are typically higher. There are two main reasons for this. One is demand, as many people take road trips in the Summer or drive around with the time off they have. The other main reason is gasoline production gets more expensive as refineries start using the “Summer blend” of oil, which has chemicals added to prevent evaporation in the heat.

This new influx of supply could mean that prices do not rise as dramatically as they did last Summer, although prices are already on par with where they were in 2018.

As always, to avoid high gas prices, you can utilize Cary’s network of bike trails and greenways, as well as the GoCary and other municipal bus routes.