Cary, NC – Coach Rod Brind’Amour changed every line and also changed the goalie, and while the first period was their best of this series against the Boston Bruins, they couldn’t keep that level of play throughout the game and dropped its first home game of the playoffs with a 2-1 loss.

The loss makes Thursday’s game means the Canes have to win the next four games if they have any hope of making it to the Cup finals. Tall order, but if any team can do it, with the Caniacs in full force, the Canes can. There were several Carolina Panthers at the game, with Luke Kuechly nearly spinning the opening siren off its bearings.

The first period was about as good a period the Canes have played during the playoffs, even with captain Justin Williams getting called for an unprecedented three penalties. In talking with many Caniacs, and with others on press row, it certainly appeared as if the adherence to the rules were being applied more to the Canes. Even Willie had to laugh while going to the box one time as he, like the nearly 19,000 in attendance, thought the call was a ticky-tack type call.

The Canes’ special teams once again added to the woes as they failed on all five powerplay attempts, with Boston scoring on one of theirs. The Canes had their fastest start of the series with Teuvo Teravainen missing a wide open shot with just 25 seconds gone in the game. If that went in, who knows how the team and Caniacs would react. The Canes used their speed, winning every loose puck and anticipated defensive plays to allow for a more open game. Michael Ferland had his best game of the entire playoffs by far. He was using his size on every play – especially along the boards or in the dirty area in front of the crease with the Bruins defense finally finding it difficult to push a Canes player away. There must be some bad blood between Willie and Torey Krug as both were going at it behind the play the entire period.

Willie wound up taking three penalties to Krug’s two during the period, but if the refs paid attention behind the play, each could have had more as they were constantly going at each other. With 10 penalties in the first and the Canes having a 5-on-3 without scoring the old NHL adage of not scoring with a two-man advantage normally leads to a loss proved to be true once again. 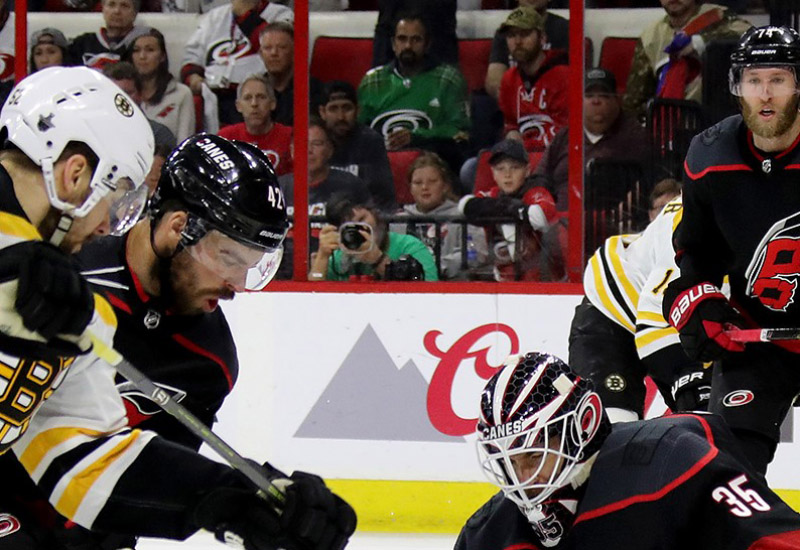 Willie’s last penalty in the first rolled over to the beginning of the second and the Canes’ defense continued the kill; however once the Bruins were at full strength, the Canes played catch to often and didn’t clear the zone when they should have and got burnt when former Cane Joakim Nordstrom made a 50-foot pass to Chris Wagner all alone to Curtis McElhinney’s left for an easy redirect for the all important first goal.

Nino Niederreiter, who plays with an edge, tried to lift a stick but his follow through hit David Krejci in the head for a penalty. The Canes were doing a good job killing the penalty but another failed clear fell onto the stick of the little ball of hate who skated across the slot, saw four big bodies in the lane and sent a backhander that CMac couldn’t see to put the Bruins up by two. The Canes speed and spunk was nowhere near the level they had in the first period but the Canes had a great opportunity with a 3-on-2 fast break that had quick passing both ways and a shot that any normal goalie wouldn’t have a chance but Rask made the save of the series.

The Canes finally got on the scoreboard at the 13:48 mark when Sebastian Aho won a faceoff in the offensive zone drawing the puck back to Justin Faulk. Faulker made a quick pass over to Calvin deHaan who wound up and sent a slap shot that trickled through the five hole on what should have been a save, to cut the lead in half. Shortly after that score, Turbo stole a puck deep in the Bruins zone waiting patiently for a play. Rookie Andrei Svechnikov used his speed and made a break for the goal with Turbo sending a perfectly placed pass to Svech ‘s tape but the redirect went wide.

McElhinney, Rask Both Solid in Goal

The third period was just plain frustrating with much of the play being between the blue lines much to the delight of the visitors. The Canes’ shot selection was weak at best and one noticeable thing all night was how many shots by the Canes were along the ice. Rarely was a shot higher than a foot above the ice with one memorable shot by Willie in the first, after having all the time in the world, he allowed bodies to pile up in front of Rask then picked a top corner only to hit the crossbar while he looked to the sky as if for answers to a prayer.

No idea why Brind’Amour shortened his bench but Haydn Fleury play just a hair over three minutes while Jaccob Slavin played nearly 29. Slavin in my opinion is the MVP of the Canes and maybe the reasoning was Slavin generates more offense as Fleury is strong on defense and is more of a stay at home D-man.

The Canes find themselves with the must-win game Thursday, May 16, 2019 and will pull all stops to make this a series. Making it to the conference finals is not what any Canes player wanted; they still want to play and win the Stanley Cup and will have their never-say-die approach for game four.

Other interesting notes are the number of press at the conference final game with people from all over the world. I had a reporter from Finland next to me and, for the second game in a row, ran into TV crews from two stations in Montreal. When asked their opinion of both the Storm Surge and the “Bunch of Jerks” campaign, all were very positive and jealous. One reporter said he was getting Jerks tee shirts for himself and several folks back in Canada.