Apex, NC – With Wake County now containing one million residents and growing every day, that means tens of thousands of cars on nearby highways. The state Department of Transportation (NC DOT) is planning multiple highway changes, including expanding NC-64, which residents got to see for themselves at a recent open house.

At a public meeting in Summit Church in Apex on Tuesday, May 14, 2019, local residents and drivers could see maps showing the proposed extensions and changes to US-64, running between US-1 on the Cary side and Laura Duncan Road on the Apex side.

According to NC DOT, this stretch of highway sees a disproportionate number of crashes, “nearly twice the state average for similar highways.”

Most of the changes proposed deal with widening US-64, increasing this stretch of the freeway to six lanes. This change is the most intense near the US-1 Cary side, with eight lanes added in, as well as a two-lane bridge to connect Edinburgh Drive going over US-64. US-64 will be lowered 15 feet to create a flat profile along Edinburgh Drive so it can meet with the new bridge. 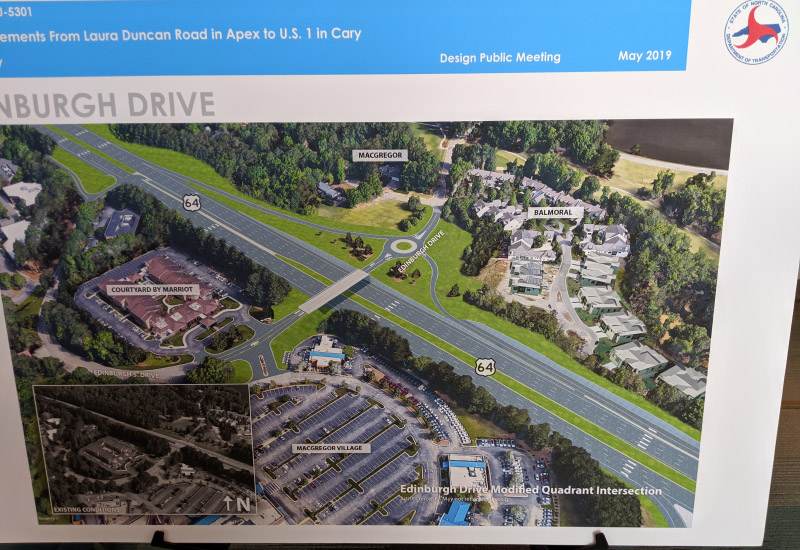 Changes to US-64 near US-1 in Cary. Yellow represents new lanes while orange is existing lanes and red is the new bridge

This plan also adds three stoplights along US-64 – two for U-turns and one to connect S Edinburgh Drive to US-64. There is also a new roundabout connecting a new ramp from US-1 to get drivers to US-64 moving west. 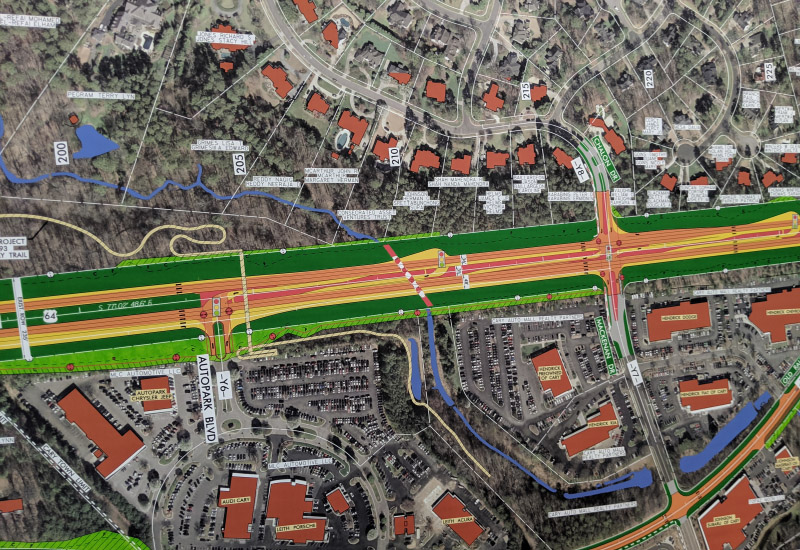 New and existing stoplights along US-64

For the portion of US-64 close to Laura Duncan Road in Apex, the highway will also be widened to six lanes. But the more significant changes on this side is three new bridges. There will be a seven-lane bridge going over the highway for both Lake Pine Drive and Laura Duncan Road.

For Shepherds Vineyard Drive, this road will run under US-64 as part of the highway will travel over a bridge. 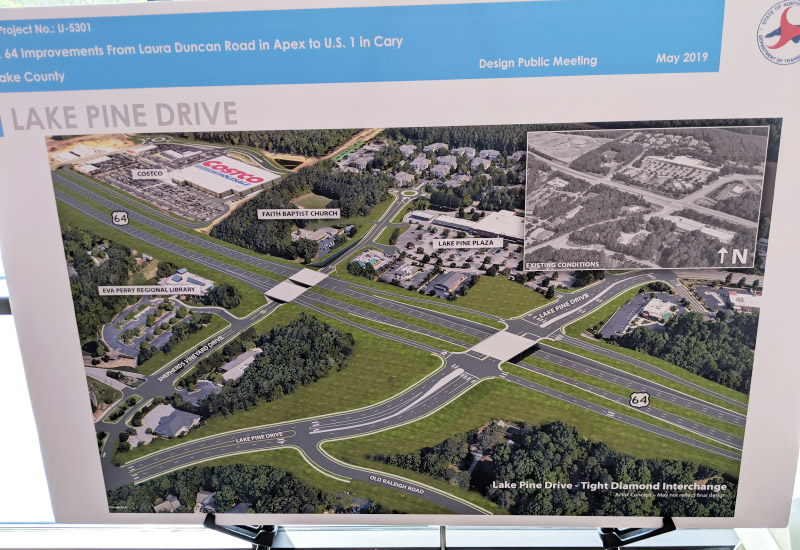 Bridges for Lake Pine Drive and US-64 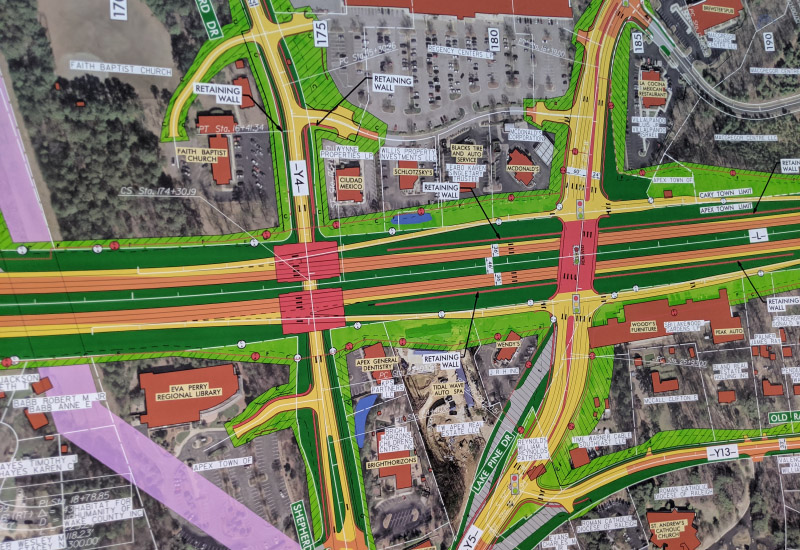 Changes to US-64 near Lake Pine Drive in Apex. Yellow represents new lanes while orange is existing lanes and red is the new bridges 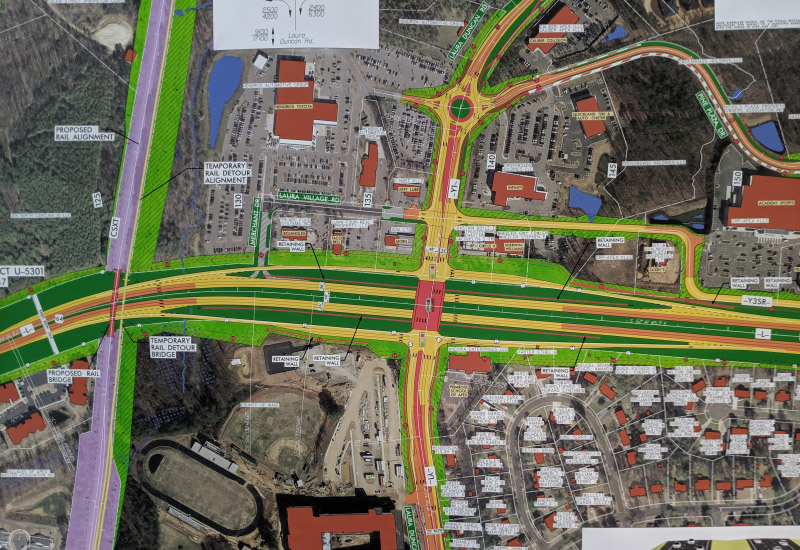 Changes to US-64 near Laura Duncan Road in Apex. Yellow represents new lanes while orange is existing lanes and red is the new bridge

The two bridges carrying traffic from Laura Duncan Road and Lake Pine Drive will have new stoplights on both sides.

At Laura Duncan Road, the connection to US-64 from Merchant Drive, Knollwood Drive and Nichols Plaza will all be removed. Also, along Shepherds Vineyard Drive, Laura Duncan Road and Lake Pine Drive, there will be new sidewalks going both directions.

Also on the Apex side, past Laura Duncan Road, the plan proposes a bridge to carry the railroad over US-64 while also adding lanes to widen the highway. 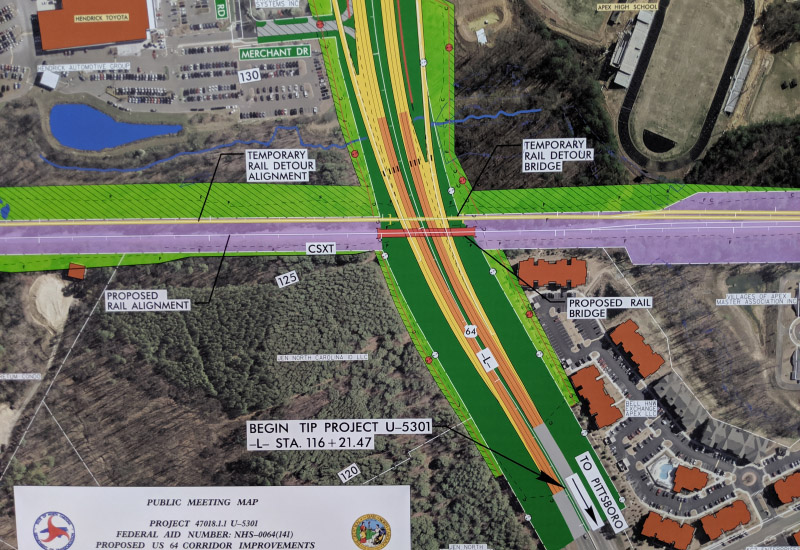 Changes to US-64 near Laura Duncan Road in Apex. Yellow represents new lanes while orange is existing lanes, purple is the railroad and red is the new bridge

Residents can provide NC DOT with public comments and feedback from now until Tuesday, May 28, 2019.

According to NC DOT, traffic on US-64 is expected to increase more than 40 percent in the next 20 years.