Cary, NC – The Carolina Hurricanes’ season ended with a 4-0 loss to the Boston Bruins as the Bruins swept the Canes in the Eastern Conference Championship. At the end of December the Canes were the 15th out of 16 teams in the east with everyone outside of the greater Raleigh area saying this would be their 10th consecutive season missing the playoffs.

Truth be known a few in the greater Raleigh area may have also counted them out but one thing Coach Rid Brind’Amour and Captain Justin Williams kept preaching if the team continued to play their system, good things would happen. The Canes then went on to rank between first and third for the hottest runs since the calander flipped to 2019 that got even the most critical pundits to believe this team was real.

Their celebrating Storm Surge got the attention of an old cantankerous Canadian commentator who despises any team not one of the Original Six, to call the Canes “a bunch of jerks.” GM Don Waddell jumped on that moniker and embraced it to the point shirts, hats, towels, pucks and everything thing possible has the slogan Bunch of Jerks. I talked to many reporters from other NHL teams and they all are jealous their team doesn’t have something along that line. One famous Canadian broadcaster told me he had instructions to bring back several Jerks shirts. 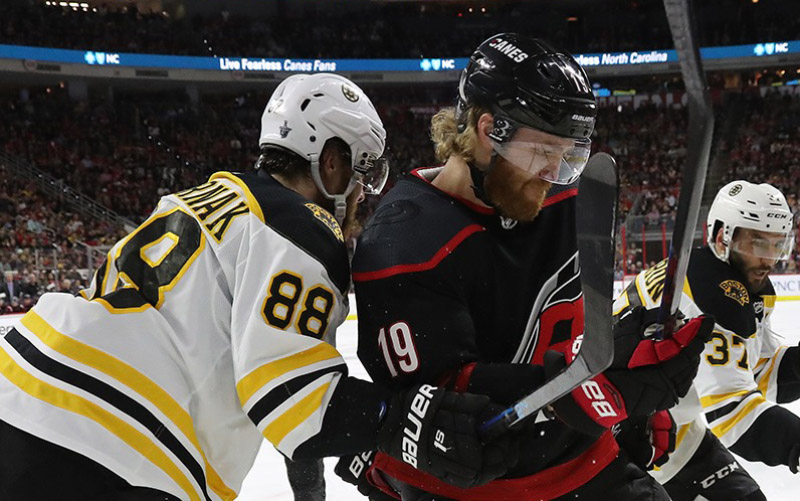 The Canes had their chances early as the Bruins got called for the game’s first penalty. The Canes’ special teams have failed them this whole series and by the end of the night, it was unfortunately the same story. The stats will show they got off five shots on the first man advantage but nine were any major challenge to the Bruins’ goalie, Tuukka Rask. The Canes’ shot selection, a major problem in game three, was better in game four but not up to their usual standards nor the standard to beat Rask.

Rask admitted after game three, many of his “saves” were shots he didn’t see but just hit him, plus of the 36 shots the Canes took, I would venture 32 were right along the ice. Nino Niederreiter took the first Canes’ penalty with a high stick. The Canes successfully killed that penalty and then had a partial 4-on-4 as Charlie Coyle was called for interference with 16 seconds remaining on El Nino’s penalty. Former Cane Joakim Nordstrom had a break away with one second left on the 4-on -4 by Curtis McElhinney and made a great save. Less than a minute later, the Bruins were pressing and the little ball of hate was all alone to CMac’s left, got a pass and had already Charlie down up the game’s first score but CMac somehow anticipated the shot and made the game’s first spectacular save.

When the play flowed to the other end of the ice, rookie Andrei Svechnikov tried another Erik Cole impression with a power move from the right, dropping his shoulder going around the defender but the puck slid off his stick just as he was going to the crease. Have to keep in mind, this kid is just 19 so his future will be amazing to watch developing.

Rask is in a Zone

Early in the second, Justin Williams was in the dead slot area and like the little ball of hate, picked his corner anticipating a red light but Rask made an unbelievable save having Willie once again look up to the hockey gods. The Canes had a bad line change that resulted in a too many men penalty and the Bruins wasted no time in converting for the first goal of the game. Frankly, the coverage was nothing short of weak and misplays by the defense. The Bruins clogged the center very well as the Canes either weren’t able to get shots off, had shots blocked or were forced to keep the puck on the perimeter.

Bruins Coach Bruce Cassidy had a great game plan as keeping the center clogged happened on every Canes attack. Late in the period, Greg McKegg did his own Cole impression and made a power move to the goal going through the top of the crease. While not getting a good shot off, Rask has a career in Hollywood after his playing days ar over as he sold the refs that he was hit. So for possibly the first time in his career, McKegg got a horrible call for having the puck and getting a shot off in close. The refs the entire Playoffs are under the microscope as game after game bad calls have been made with the NHL only dismissing those refs from further playoff games. In the San Jose- St. Louis game the night before, a blatant hand pass was missed that results in a goal in overtime.

According to one report, this Canes-Bruins game had more hand passes called than any game this entire season. That penalty resulted in another Bruin powerplay goal that was again, too easy for the Bruins. The Canes’ PK started the year off the weakest in the league then made a tremendous turnaround to one of the best they’re back to the worst in the playoffs. One player key on the PK is Jordan Martinook out with a lower body injury. His tenacity and energy is sorely missed. 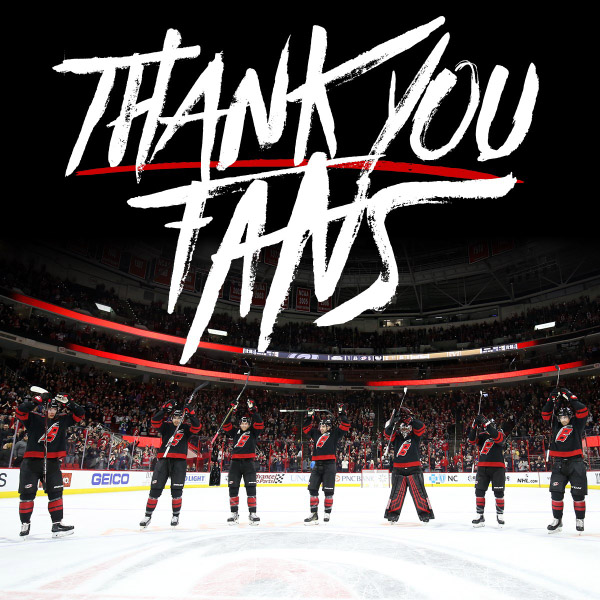 Thank You Canes For A Great Season

In the third, the Canes had the puck behind their net slowing the pace for a line change but botched the impending clear that resulted in another easy goal. At that point, the sellout crowd knew the Canes magical and fun season was about to end. Roddy pulled CMac with 5:22 to go with the Bruins adding an empty netter to close any hope of another miracle.

The best tradition in all of sports, the center ice handshake took place with Willie and Zdeno Chara leading each team. Chara didn’t play due to an injury but he showed some class joining the line with his sweater on.

Before the game, I had the great pleasure of talking to Mark Martinook, Jordan’s dad for about 15 minutes. What a great guy and no doubt the apple didn’t fall far from their family tree. Mark was full of fire, just like Jordan, and was enjoying the tailgates and wanted to start a new father tradition which I think is outstanding. He’s a proud dad and grandfather as Jordan as a three-month-old and great news, Jordan and family just moved to Cary!

This was a great season for the Canes and all of their affiliates as both the Checkers and Everglades are in the semifinals of their leagues. This is the first time in the NHL history the NHL, AHL and ECHL teams from the same organization have all been in the championship semi finals. The future is very bright indeed. Go Canes!