Cary, NC – General Manager Don Waddell and Coach Rod Brind’Amour had a season summary press conference at the PNC Arena on Tuesday, May 21, 2019. Waddell started with a few opening words on how pleased he was with the team and direction then immediately opened it up to questions. Unlike talks after so many previous seasons, both questions and answers were generally positive as this season had so many good things to discuss.

In hindsight, it was all due to the belief and leadership this team had in the locker room and on the bench.

Both Roddy and Waddell spoke of the leadership as a key factor, not just during the playoff run but what led to that run. Roddy talked about how back in early December, when the Canes couldn’t get any puck bounces their way and the team was competing for the worst team in the east, the players bought into his system. Good team create their own good luck, in hockey sense, puck luck, and starting with the December 31 game, their luck started to change and was a month before the league started to notice.

Roddy said they really didn’t change his system and acknowledging there were sometimes five, six or seven rookies in the line-up and while they are NHL players, reflecting on his own rookie experience, being in the NHL is intimidating, going up against some players in the best league in the world who may have played in the NHL for more years that the rookie has been alive. He commented on the weekly improvement in Andrei Svechnikov and how much better he was every game and how much Svech wants to improve. The twinkle in Roddy’s eye was possibly how Svech reminded him how he was as a rookie.

Waddell nominated as GM of the Year

Waddell acknowledged that’s more of a team award than an individual award, but give credit where it’s due. From the start he didn’t go after the job. Both he and owner Tom Dundon did a search who would fit the Canes best. After reviewing a few candidates, Dundon turned to, or pressured, Waddell for taking the position.

One thing Waddell told me some time ago is character is one of the most important traits this organization looks for throughout the organization – not only do they interview the draft picks prior to the draft, they meet with their families. The Canes have a history of players with high qualities both on the ice, in the community and with their families. About 20 years ago there was a player who reportedly had a domestic issue. He was traded in days. That was several GMs, several Presidents and even an owner ago, and the organizational identity remains among the highest standards in the NHL that for a league, must be the best among the four major sports in North America. 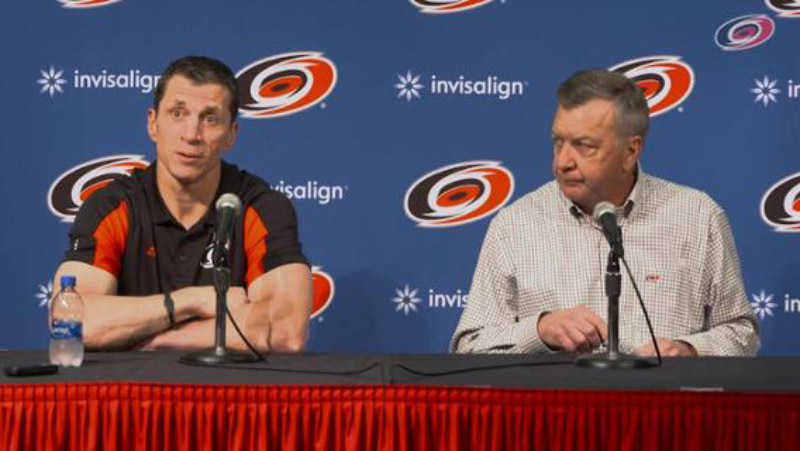 Yes, that’s the #1 priority during this off-season. Several players are either UFAs or RFAs. Getting Sebastian Aho signed was acknowledged their top action. When Roddy was asked about Justin Williams and if he would be involved in that decision he reply was classic Brind’Amour. “No, not at all. Unless I have to,” he said with a smile.

Waddell acknowledged he would want both Mrazek and McElhinney to return. They said they would address the Scott Darling situation in the coming weeks. Most in attendance believe he’ll be bought out, freeing Darling up to go back to Chicago and possibly their AHL team. It’s a big shame he didn’t work out and everyone wishes him well both on and off the ice.

Both Martinook and deHaan had surgeries this week. Martinook’s was in Philadelphia while deHaan went to Cleveland as each needed specialists. Martinook will need about two months for a full recovery while deHaan could be out as long as six months. van Riemsdyk could be another four months before he’s back in the gym.

While it wasn’t brought up, when a team goes as far as the Canes did in the playoffs, it would be unusual for a player not to have something bothering him. You could see it in the way several top players didn’t play their game so hopefully this Summer will be a time to fully heal and learn how to deal with these in the playoffs next year.

Waddell said the owner hasn’t issued a budget. Being a competitive person, Tom Dundon likes, and wants, to win. If there is a player that would strengthen the team, Waddell has the okay to get whatever it takes. When asked about being the lowest paid team, Waddell stated with all the new contracts to be signed over the Summer – that alone will make a big impact on payroll and the team could not change at all which is a great point on salaries.

Read into that: the Blackhawks. They gave a few players huge contracts after their nice Stanley Cup runs and were quite possibly the highest paid team last season yet failed miserably to make the playoffs. This highly paid players are fantastic but those high salaries affect the ability to balance a team.

Lidl Bringing Back Plans for a West Cary Store