Cary, NC – At its first meeting of September, the Cary Town Council took up a Public Hearing on rezoning for Cary’s Sri Venkateswara Temple and a large neighborhood in West Cary, as well as a vote on the Green Level Destination Center rezoning for 70 acres of office, commercial, hospital and residential uses.

The only Discussion Items on the agenda at the Thursday, September 12, 2019 Cary Town Council meeting were an annexation and rezoning for 69.96 acres in the Green Level Special Planning Area in West Cary to make this a Mixed Use District, as well as portions with a Mixed Use Overlay District and Watershed Protection Overlay District zoning. The Cary Community Plan specifically designates this section as the “Green Level Destination Center,” with conditions specifying limits and requirements for its uses: 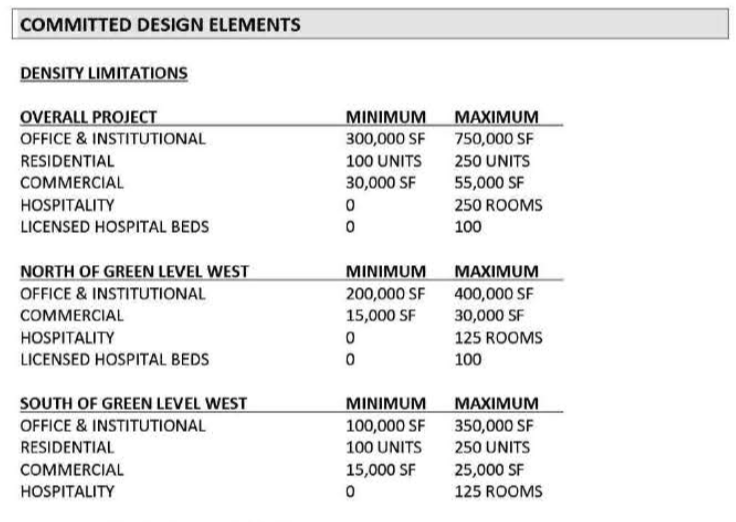 Changes to the conditions since this first appeared before Town Council back in 2018 include a grade-separated pedestrian tunnel under Green Level Church Road and dedicated bike lanes on all primary streets. Additionally, in exchange for surrounding road and intersection improvements, the applicant has asked for administrative approval on all “larger development plans that include more than 100,000 square feet of floor area or 100 dwelling units that are submitted prior to July 1, 2029” and “any plans that involve floor area for a hospital use in development pod 6, regardless of when they are submitted.” Normally, these sorts of plans would need to go through the Quasi-Judicial process.

The Planning and Zoning Board voted unanimously that this rezoning request is consistent with the Cary Community Plan. 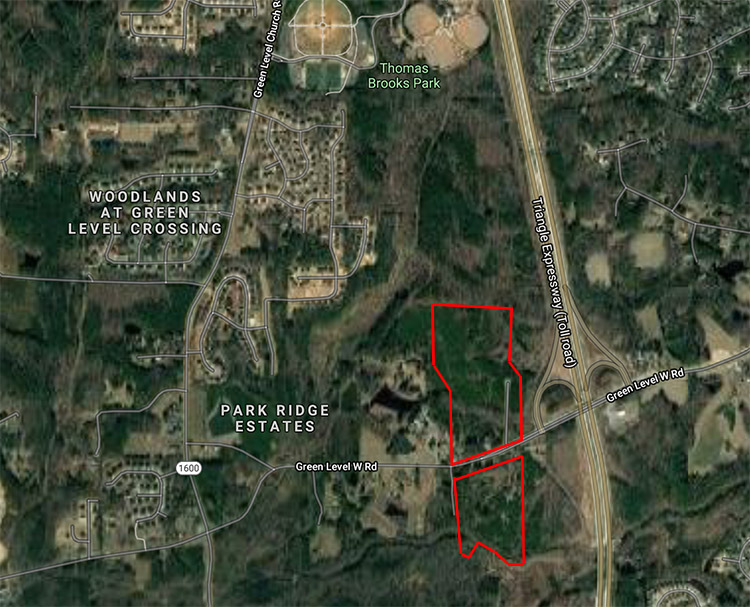 There were no speakers during Public Speaks Out for this project and most of Town Council seemed happy with many of the new conditions added. However, Cary Mayor Harold Weinbrecht did check with Town Attorney Christine Simpson to make sure the condition about administrative approval is allowable since it would “ties the hands of future councils.” Council Member Jack Smith also asked for clarification on why the applicant is asking for this and was told it was because of road improvements.

The sole dissent came from Council Member At-Large Ed Yerha, who said the Cary Community Plan asks for this part of the Green Level Special Planning Area to have a rural feel, which he did not think was being done.

“This really goes for an ultra-urban feel,” Yerha said.

In the end, the annexation and rezoning passed, 6-1.

On the Public Hearing agenda, applicants on the land off of Chapel Hill Road used by the Sri Venkateswara Temple of North Carolina is asking for rezoning to Office and Institutional Conditional Use, with conditions limiting the land to assembly and religious assembly use. This is because of the current zoning limits building height to 35 feet, but an O&I zoning would go up to 50 feet, plus an extra foot for each foot of setback from the road. On this spot, that means a maximum height of 87 feet.

Conditions attached include no increase in occupied structures beyond the existing square footage there.

While many attendees of the temple came to the meeting, there was only one speaker – the temple’s vice-chair. He talked about the cultural and community importance of the temple and said what elements are still incomplete and need to be built. If completed, he said the Sri Venkateswara Temple would be one of three in the entire country that follows Southern Indian traditions in its construction.

During discussion from Town Council, Weinbrecht asked about the height of the temple, since it is already on elevated land, and that 5o to 87 feet would be measured from the ground where its built, not from the level surface at the base of the hill. Mayor Pro Tem Lori Bush also had concerns about how this location could be impacted by the planned widening for Chapel Hill Road to eight lanes.

“Do we have an idea of how that will impact the right-of-way?” Bush asked.

The rezoning was sent to the Planning and Zoning Board for their recommendation.

The Public Hearing that had the most comments was a rezoning for 60.59 acres off of Morrisville Parkway, to Transitional Residential Conditional Use. This would be a mix of age-restricted detached dwellings and townhouses, with the townhouses centrally located in the property. Conditions include limiting it to 115 detached dwellings and 35 townhouses, with five townhouses per building. Also, facing Morrisville Parkway is an 80-foot buffer, which exceeds the required 50-foot buffer. 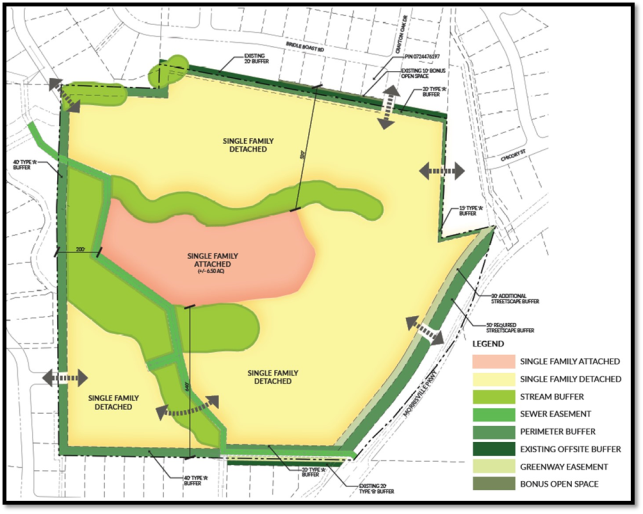 The proposed layout for the detached dwellings and townhomes

The applicant said this layout preserves open space by “clustering” the development, though in her comments, Council Member Jennifer Robinson said this does not follow the spirit of the Cary Community Plan because the stream buffers necessitate this clustering on the property so it is not as if the developers are making a conscious effort to cluster.

During the Public Hearing, there were three speakers. One nearby neighbor (who also suggested nearby White Oak Elementary’s parent night may have depressed turn-out) said the Cary Community Plan calls for this to be an area with rural features, which he does not think the plan accomplishes, and he also cited the Cary Community Plan to say this development does not fit:

“Pockets or occasional mixes of other housing types, such as small-lot single-family, patio homes, or townhomes, may also occur. Small or specialty multi-family (e.g., senior housing, care facilities, affordable housing) are also acceptable provided they are on sites of limited size – ideally about 10 acres or less (as opposed to sites of about 20-30+ acres typical for such housing in other parts of Cary). These types of housing should be shielded from view from thoroughfares and the American Tobacco Trail.” – Cary Community Plan, page 205

But one other speaker, representing the developer, said this does not go against their plan because it refers to specialty multi-family, not detached dwellings. The disagreement centered around the line about limited size lots of around 10 acres. Weinbrecht, in his comments, suggested Cary staff look into the matter to resolve these different interpretations. 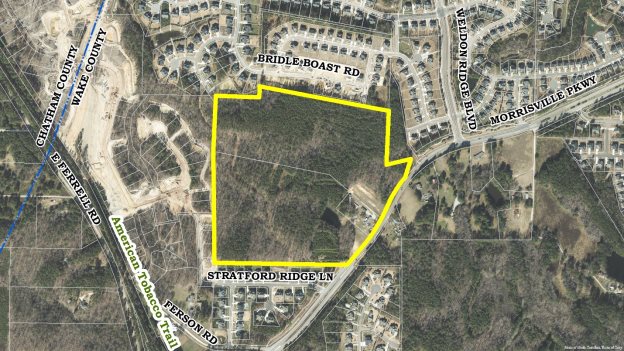 The location of the proposed rezoning

Also speaking was a nearby resident who talked about the importance of trees to individual health as well as the overall environment, while also talking about her son’s health concerns and how having trees around aids him.

There were several other items on the Public Hearing agenda that did not have public comment or much council discussion. One was for the economic development incentive grant for Xerox, which announced it is opening a new center in Cary. The conditions of the grant say Xerox will receive $210,717 from the Town of Cary if, at the end of five years, the company has created 600 jobs with an average salary of $113,000 and made an $18.4 million capital investment. Town Council passed the resolution unanimously.

There were two annexations on the agenda, both within 100 feet of each other, both along Vera Road and Old Trinity Circle. Both passed unanimously. There was a third annexation, along Morrisville Parkway and Ferson Road, but this annexation has to come back for a later vote because it is attached to a rezoning request, which has not yet had a Public Hearing.

There was one speaker at Public Speaks Out: a resident along Twyla Road who said the past decades of development in the area have left this area in significant disrepair. She said her hope is that the rezoning will help out and asked Town Council to approve it.

Story by Michael Papich. Photos courtesy of the Town of Cary, Google Maps and Hal Goodtree.