Cary, NC – The Cary Town Council took on a long agenda at their latest meeting, including a packed Public Hearing on rezoning in West Cary and the 2020 budget, plus a vote on the Community Development Block Grant and a rezoning on the Cary Pointe PDD.

Before the Thursday, May 23, 2019 meeting started, Town Council voted to remove the Weldon Ridge PDD amendment from the consent agenda. This item has seen a lot of public input and opposition at previous meetings and Council Member Jennifer Robinson said there is still some “consternation” with the plan to explain why it was removed from the consent agenda.

At Public Speaks Out, there were three speakers who were all nearby residents who spoke out against the rezoning, all citing the increase in housing on land that they said should be only for a school.

There is currently no date for when it will come up for a vote at Town Council.

Of all the Public Hearings at this meeting, the one that saw the most comments was an application to rezone 36.84 acres in West Cary, at the intersection of Morrisville Parkway and NC-540, along Twyla Road. This would be a mix of commercial/office and residential land. For the 7.8 acres of commercial/office, it would be a maximum of 10,000 square feet of office and commercial space and a hotel with a maximum capacity of 200 beds. For the 20.1 acres of residential land, it would include detached housing, townhouses and multi-family units, with a maximum of 420 for those multi-family units. The rest of the land is open space. 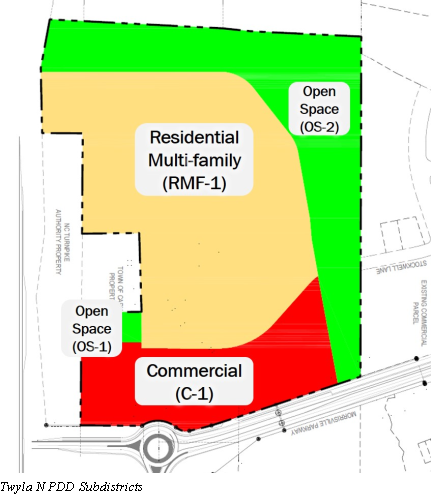 Other changes on the site including updating the interchange and adding a new eastbound left-turn lane at the Morrisville Parkway/NC-55 intersection and a westbound right-turn lane on Morrisville Parkway. Town staff have also asked the applicant to make improvements on four turn lanes in the area but the applicants are currently only agreeing to one of those, although staff did note that this is the most important of the lanes.

Also, to the south of this site, across from Morrisville Parkway, there is another proposed rezoning but that has not come up for a Public Hearing yet.

There were nine speakers for this Public Hearing, both for and against the project. On the applicant’s side, both the developer and the transportation engineer spoke. The developer described the topography of this particular site and said the low incline on the north side makes it bad for commercial but good for housing, which is why the site is divided up so. The transportation engineer talked about the benefits of the new road changes and said they are committing to a new traffic signal as well. Also, a representative for the real estate company involved in this project spoke about the company’s merits, although Town Council cannot consider who the applicant is in a rezoning, only the proposed land use.

Four residents spoke out against the plan, with one resident circulating a petition from the neighborhood. The crux of their opposition appeared to be the preservation of this relatively small community and the impact the new density would have on them. There were also two residents who said they support the rezoning and said roadwork here in the past has damaged their neighborhood and this rezoning will either settle those problems or allow them to sell their homes and get out.

Town Council’s comments were brief, but Robinson and Cary Mayor Pro Tem Lori Bush both asked whether the existing roundabout would need to change to a turn signal intersection, or if it could even become a dual-lane roundabout, which some members have seen in other cities on their town trips. Bush also asked whether Twyla Road will get curb and gutter added, as is the town standard. The applicant added a final comment that they are looking into it but the stream buffer there makes it difficult.

Cary Mayor Harold Weinbrecht urged the residents, particularly those who signed onto the petition, to talk with the applicant as he did not think there was much communication going on now. The rezoning then went to the Planning and Zoning Board for their recommendation.

This was the first of two Public Hearings on Cary’s proposed Fiscal Year 2020 budget. The budget is $336 million, which is smaller than last year’s budget of $347 million. There is no change to property taxes but utility rates are up 2 percent and the solid waste fee is up $2.50/month, due to increased costs for processing recycling.

There was one speaker at the Public Hearing – a representative for the local YMCA who thanked Town Council for including funding for the YMCA in the budget.

There was a Public Hearing on an amendment to the Cary Community Plan to include the Parks, Recreation and Cultural Resources’ addendum, which lays out land for future parks, conservation around Jordan Lake and new parts of Cary’s greenway network.

The only speaker at this Public Hearing was opposed to parts of the plan, saying she was worried the proposed greenway trails would impact her mother’s property on Bachelor Road. Council Member Don Frantz responded by saying the locations proposed on the plan are approximations and not set in stone.

“We historically work with land owners to accommodate some of the concerns expressed,” Frantz said.

The amendment was then sent to the Planning and Zoning Board for their recommendation.

The only other Public Hearing was on an annexation for land on Wackena Road in Cary’s ETJ. There were no speakers and Town Council approved the annexation unanimously.

This year, Cary received $650,000 from the U.S. Department of Housing and Urban Development to use in the Community Development Block Grant (CDBG). The Town of Cary is also adding $497,000 from their general fund for projects related to to the block grant. $700,000 of this money will be spent on projects related to housing and $157,000 for economic development. Local organizations that received funding through this year’s CDBG include Resources for Seniors, Rebuilding Together of the Triangle, Habitat for Humanity, the Tammy Lynn Center, the White Oak Foundation, Transitions LifeCare and Dorcas Ministries.

Council Member Jack Smith complimented this year’s slate of projects for focusing on rehabilitating existing buildings, which he said makes the funding “most impactful.” Robinson said Cary controls its own CDBG fund, which not all communities do, and said it gives them advantages, while also adding that the way CDBG applications are scored may change in the future. Town Council passed the CDBG action plan unanimously.

On the agenda was a proposal to rezone land in West Cary along NC-55 and Morrisville Parkway to create a 10.2-acre PDD, zoned for office/research and development and an age-restricted apartment building. This site also has two large stream buffers on both sides. This was initially not recommended by town staff and the Planning and Zoning Board voted unanimously against it, due to concerns about transportation and access. 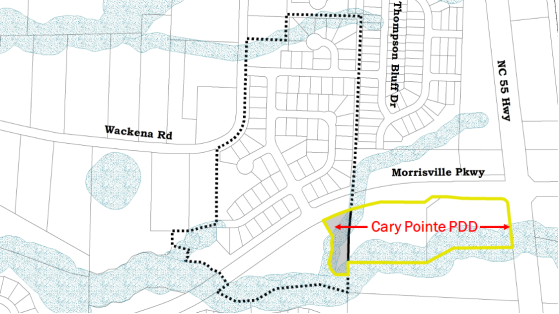 But since then, the applicants changed the conditions and now have Morrisville Parkway widened in some spots along the PDD, and have included a right-turn lane exiting the site. Planning and Zoning Board Chair Mark Evangelista said these changes address their concerns with the proposal.

Both the applicant and their transportation engineer spoke at Public Speaks Out about the changes made to this project and urged Town Council to support it.

With the transportation changes in place, Town Council approved the rezoning unanimously.

One Consent Agenda item was pulled to be a Discussion Item. This was a proposed amendment to an office site in the Weston PDD to remove part of the streetscape to increase parking. The applicants had changed much of their proposal since first asking for more parking and the part of the streetscape they are removing is a utility easement so it already did not have any trees.

A representative for the applicant, local video game company Red Storm, talked about the changes they had made during the Public Speaks Out portion of the meeting. 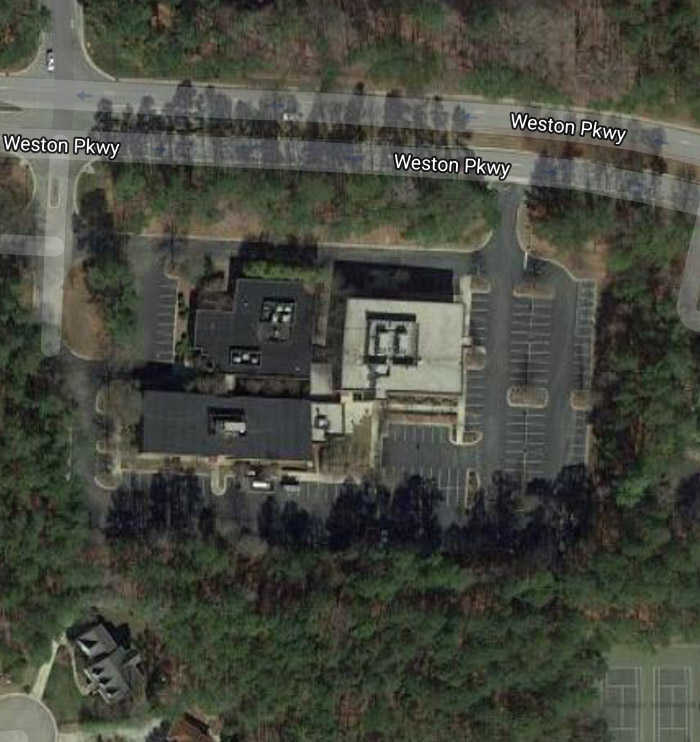 The office site in question

The applicants are also expanding the South side buffer to 55 feet and adding conditions to prohibit lit signs and reducing the height of parking lot lights.

Council Member At-Large Ed Yerha said he appreciated the work the applicant had done but still voted against it because he did not want any streetscape reduced along Weston Parkway, which he said is a special road for Cary.

Frantz agreed that Weston Parkway is important but said since this easement did not have any trees in it, and given how much the applicant changed their plan based on neighbor feedback, he supported the amendment. But Frantz and other council members said this should not be seen as setting precedence when it comes to streetscapes. Council voted for the amendment 6-1.

The only other Discussion Item was a vote on town staff starting preliminary findings for the October 8, 2019 bond referendums, which Town Council voted for unanimously.

The meeting started with a proclamation to celebrate Cary’s 40 years of greenways, and at Public Speaks Out there was one resident who expressed their love for the greenway system.

Also during the town reports, Cary Attorney Christine Simpson said the town’s lawsuit with Hawthorne at Parkside Apartments has been settled and dismissed.