Cary, NC – The latest Cary Town Council meeting saw long discussion and public input on proposed changes to the GoCary routes and a rezoning case in West Cary to change land zoned for a school and housing. There was also funding passed for several new sidewalks in town as well as recognition for a long-time Cary staff member.

The agenda item that took the least amount of time at the Thursday, January 24, 2019 Cary Town Council meeting was voting on the priority list for funding new sidewalks in Cary. The list and ranking is based on Cary’s Sidewalk Policy criteria and is an apolitical process as Town Council described it, while adding that they prefer such a system.

Also, this Discussion Item would convert the trail project on Ederlee Drive to a five-foot sidewalk. The item passed unanimously.

The item that took the most amount of time at the meeting was a Public Hearing to rezone 61.93 acres along the American Tobacco Trail, in the Wake/Chatham County line. Currently, the land is zoned for 58.55 acres for a school, church or day care and 9.19 acres for residential space, with a density of five dwelling units per acre.

The rezoning would switch the locations of these uses, putting the residential area next to the American Tobacco Trail and adjacent town parks, while expanding the size to 33.42 acres with a density of three units per acre. The land for a school, church or day care would be split up, creating a 17.39-acre section in the South of the property that would only allow a school, with the remaining 19.77 acres left the same, still allowing for a school, church or day care usage. 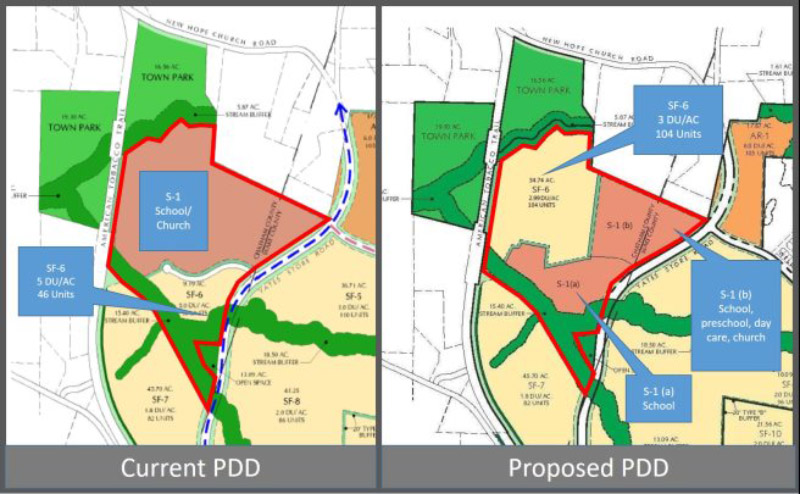 The rezoning changes, with the map provided by the Town of Cary

The new rezoning would change the school from having around 2,200 students to a cap of 1,300. Also, a new state law says when it comes to rezoning related to schools, a municipal government cannot deny the rezoning based on the level of service for the roads in the area.

This Public Hearing had 17 speakers, with a mix of opinions. 11 of the speakers were opposed to the plan, with most concerns related to increased traffic. Speakers cited traffic accidents in the area already, a lack of signal lights, long drive times and the fact that the school on this site would likely not have buses because of its smaller size. Several speakers also said the zoning already allowed for both homes and a school and that should be maintained.

The question about the school’s size was related to a separate topic: the land developer says a private school, Thales Academy, is planning to build on that site. The specific school going in cannot be part of Town Council’s decision in rezoning but given the size, it is very unlikely a public school would be able to build here.

Of the people who spoke in favor of the rezoning, there was one person who said he wanted to live in a community like this, two speakers who said there was a need for schools in West Cary – private schools in particular – and two land developers who said a school in this area would increase interest in surrounding neighborhoods being built. Also speaking was a representative for Thales Academy who said their academy would not be feasible on the current amount of land zoned for the area. There was also one speaker from the Chatham County Economic Development Corporation who offered to assist and facilitate with any projects in the joint land use area.

Opinion was also split on Town Council. Councilmember Jennifer Robinson, who represents this district, seemed the most opposed. Robinson said this area was specifically zoned for this particular school and housing mix and the people who bought the land were told as much.

“We wanted this to be for public purpose,” Robinson said.

Cary Mayor Harold Weinbrecht also seemed to be leaning against the project but most of his comments touched on the change to state law about how they could or could not vote based on level of service on roads, as well as other restrictions such as how streetlights can be put in and improvements on Department of Transportation roads.

“It’s frustrating when we have our hands tied and then we still get the heat,” Weinbrecht said. “It sucks.”

Weinbrecht also asked Town Attorney Christine Simpson to help determine what the limits of the law on level of service of roads are.

On the other side, Councilmembers Don Frantz and Jack Smith both seemed supportive. Frantz in particular talked about how the smaller school would mean fewer students and thus fewer cars, which would be an improvement in traffic over the current zoning. Additionally, he said the rezoning makes the residential section less dense.

Mayor Pro Tem Lori Bush said her opinion was mixed but similarly said she did not think the current zoning for this area was very good either.

“This is not an easy one,” Yerha said.

The rezoning then went to the Planning and Zoning Board for their recommendation.

The only other Public Hearing on the agenda also saw many different speakers as Town Council was asked to vote on changes to GoCary service. You can find the full proposed map for yourself online but changes include ending the Maynard Loop, having a new route dedicated to Harrison Avenue, a direct route from Downtown Cary to Cary Towne Center, an express route to Apex and Holly Springs and other changes to stop locations along different routes. Buses would also no longer go into shopping centers but instead park near the entrance.

They are also piloting a micro-transit node system where residents in West Cary can signal that they need a bus with their phone, with a goal of mapping where the most need is in West Cary to construct a dedicated route in that part of town. 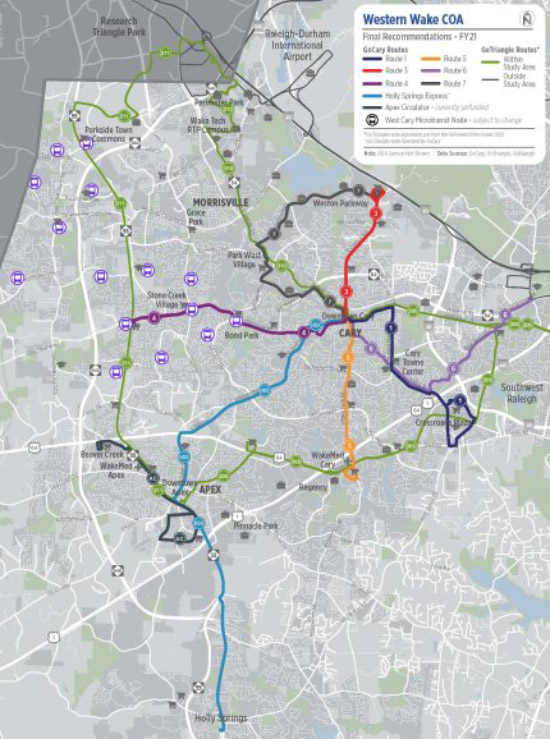 Map of the route changes proposed at the Thursday, January 24, 2019 meeting

There were seven speakers at this Public Hearing, with all but one opposed. These speakers all talked about how these changes impact the elderly and disabled. These criticisms were primarily about how these stops are moving away from apartments and living communities for seniors who would now need to walk farther to get to these stops, as well as the challenges of walking into a shopping center rather than having the bus stop inside of them. Several speakers also said the Door-to-Door service is not a workable replacement because of its higher cost.

One speaker, who talked about the needs for disabled riders, said some of the new stop locations did work better but they were not at places where there was easy sidewalk access or ramps. Another speaker also criticized the congestion at the Cary Bus Depot in general, in addition to her comments about where stops need to go.

The one speaker who was in favor of the plan was Joe Milazzo, executive director of the Regional Transportation Alliance. He said the new routes were better overall and also said not enough residents in Cary are aware of the bus system and use it.

At the council’s discussion, Frantz asked about using the node system for seniors as well and also questioned its necessity in West Cary. Frantz also said there are coming improvements to the Cary Depot that should increase its efficiency and reduce congestion.

Bush said, given the comments about sidewalk access and walkability, there needs to be more on-the-ground walkthroughs and inspects of bus stops and sites by town staff.

Weinbrecht said the changes should be tabled to work on the layout and address concerns, and the rest of council agreed unanimously.

There was one speaker at Public Speaks Out. She is a resident in one of the two houses left out in the Special Planning Area rezoning from the last meeting. She said and her neighbor have wanted to sell their house but have been unable to and asked the town for its help, because they do not want to live in this area now with the rezoning around them.

At the start of the meeting, Town Council recognized athletes from Cary High School, who are the state champions in men’s cross country and wrestling.

Council also recognized outgoing Cary Deputy Town Manager Mike Bajorek, who is retiring at the end of the month after 31 years working for the town.

Harold’s Blog: Town Council Meeting, State of the Town and More
Scroll to top
%d bloggers like this: