Cary, NC – The first Cary Town Council meeting of 2019 saw extensive discussion over a proposed office rezoning adjacent to a neighborhood, as well as votes on rezoning land in West Cary, expanding 911 services and more.

The item at the Thursday, January 10, 2019 that had by far the most discussion was a Public Hearing on rezoning 1.98 acres of land off of Green Level West Road, on the edge of the Destination Center there, from residential to office and institutional. Conditions would make this land use limited only to office, business and institutional structures as well as associated uses. Building height would be limited at 35 feet and floor space would be limited at 15,000 square feet. There would be no dumpsters or loading docks and there were architectural conditions to limit the kinds of roofing. 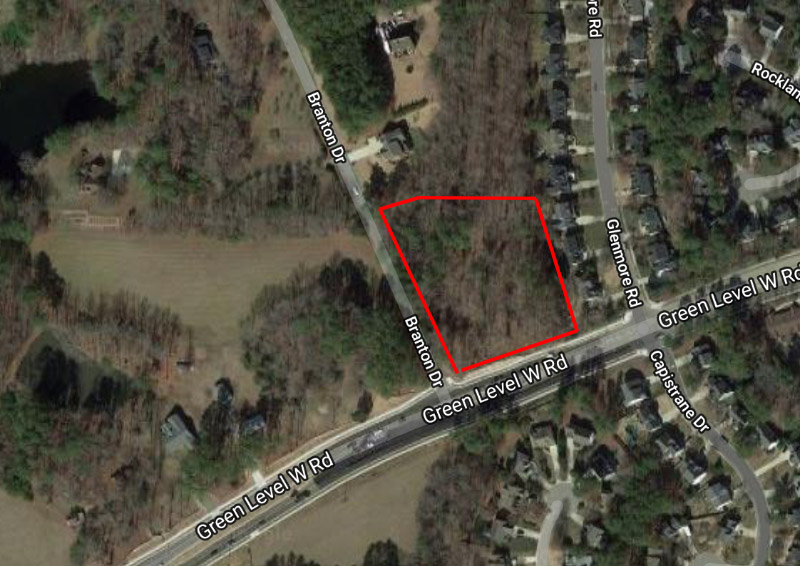 14 speakers came out to this Public Hearing, most of whom were residents who were opposed to the plan. Concerns were mostly related to the density of an office next to residential single family housing. Included in these concerns were the removal of natural features and natural barriers, increased traffic on a road residents said was already too busy and one resident said the property in question is already on an elevation so the 35 foot limit would seem even larger. Speakers also had residents in the audience stand to show their opposition. Some concerns also brought up noise from a generator but the applicants said they would not have a generator, though this is not a condition of the rezoning.

Also in attendance were employees from the company filing for the rezoning, Net32, a Cary-based tech company that works with dentists and dental equipment suppliers. Employees from Net32 also stood up and two of the company’s owners and founders, as well as one employee, voiced their support and said the company did good work and this would be expanding a local business. In addition, one resident spoke in favor of the proposal, saying it was “smart growth.”

With Town Council’s comments, Cary Mayor Harold Weinbrecht thanked the speakers and everyone in attendance and reiterated that their vote cannot consider Net32 and its position in Cary as the rezoning applies to the land and not the applicant. Weinbrecht also said he understands the concerns about the rate of growth in West Cary.

“In Cary, our growth rate is only about 2 percent but in West Cary, it feels like 200 percent,” Weinbrecht said.

Weinbrecht, like other councilmembers such as Councilmember At-Large Ed Yerha, did say they did not understand why an office had to go in so close to a residential area and right on the edge of a destination center.

“It doesn’t make sense to me,” Yerha said.

To residents’ concerns about density and deforestation on the land, Councilmember Don Frantz said whatever will go in there will be dense and this plan may represent the best option.

“If you think this will develop at R-12, you’re kidding yourself,” Frantz said.

The proposal went to the Planning and Zoning Board for their recommendation.

There was one other Public Hearing on the agenda: a technical correction to the zoning map along Palmetto Drive. This is near land that was rezoned as part of a lengthy case by Habitat for Humanity to build affordable housing. One piece of the plan, a small sliver the size of a roadway, was thought to be a right-of-way. Upon further review, town staff say it is not.

Therefore, Town Council had to vote on whether to make this land residential R-40, which the land would have been if it was not a right-of-way. With no speakers, Town Council voted unanimously to make the technical correction.

Town Council took up an annexation and rezoning for land in Wake County, close to 79 acres in size. This land is located in one of Cary’s Special Planning Areas as outlined in the Cary Community Plan. The rezoning divides this land up into townhomes, single family dwellings, subdivided attached and semi-attached dwellings and common open space.

Changes to conditions now include limiting townhomes from 9o to 75 with five units per building. There is also a maximum of 50 lots for detached dwellings, with lot size no smaller than 7,000 square feet. For lots adjacent to American Tobacco Trail, that limit is 10,000 square feet. 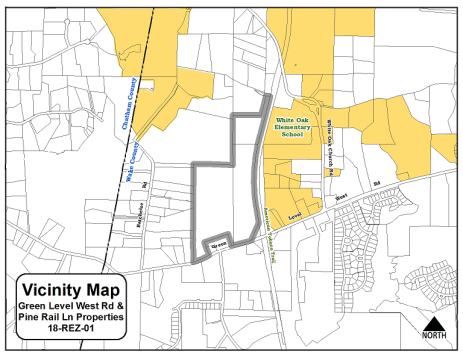 Town staff said they were initially opposed but with new conditions, Debra Grannan in the planning department said staff are now more willing to accept the plan. The Planning and Zoning Board voted unanimously against the plan. Board Chair Mark Evangelista said the Cary Community Plan calls for this Special Planning Area to have rural character and given the density, the members did not think this proposal fit that.

Town council were still largely supportive, with members calling the proposal realistic for what would be in this area. Councilmember Jennifer Robinson said they have not gotten the proposals they had envisioned when this land was planned for rural developments.

Yerha was still opposed and in his words “disappointed” by the plan and said the idea of rural development had been abandoned.

“It’s the Special Planning Area. I wanted to see something special,” Yerha said.

Yerha was the sole no vote and the annexation and rezoning passed 6-1.

The final item of the night was originally part of the Consent Agenda but Councilmember Ken George asked for it to be moved to Discussion Items. The vote relates to the same Habitat for Humanity rezoning, with the Town of Cary donating town land to the site for stormwater retention.  According to town staff, this site would collect stormwater for an additional five acres of land and reduce the impact of a 100-year storm by 10 percent.

The approximate proposed location of the Habitat homes. The Town of Cary land is just north of it.

George said he wanted to pull the item to highlight the stormwater management on the site, and George also represents the district where this land is located. There was only one speaker at Public Speaks Out, who thanked the town for this stormwater retention pond.

But George also wanted to add an easement to this town property being conveyed, so there would be the potential to put in a sidewalk in the future. If this was voted on as part of the Consent Agenda, they could not add in this easement.

Mayor Pro Tem Lori Bush questioned whether this should be a Public Hearing so residents and the new land owners can weigh in on whether they want the easement or not. Other councilmembers pushed back, saying the easement does not guarantee anything will be built and the land still belongs to the Town of Cary until it is conveyed. The lawyer for Habitat for Humanity was in attendance and he said they would not have a problem with the easement or a future sidewalk there, as long as the sidewalk is in the buffer.

Town Council voted 6-1 in favor of the conveyance with the easement included, with Bush voting against it. Councilmember Jack Smith also said in the future, he does not want these kinds of items brought up in the middle of a meeting so it can be hashed out by Town Council on the spot.

There were two other Discussion Items on the agenda. One would expand Cary’s 911 services to Morrisville and Apex so those towns could utilize Cary’s 911 services. This would be an interlocal agreement, like ones Cary has with drinking water and wastewater infrastructure.

As town staff put it, this plan could not only help out Cary’s neighbors but it would result in improvements to Cary’s 911 infrastructure, making it more durable. The immediate cost would be $51,600 with $4,600 in ongoing costs for things such as fiber optic cable, as well as 27 new staff positions. Town Council voted unanimously in favor.

The remaining Discussion Item was for funding street improvements in Cary. Town staff said they are using a less expensive method to maintain roads, which takes an entire neighborhood into account and works on roads with deteriorating quality rather than waiting until they are in poor condition and thus more expensive to fix. The cost for this plan would be $5,923,665.25. Town Council voted for the funding unanimously.

A few hours before the meeting, water mains broke in Downtown Cary and Town Manager Sean Stegall started the meeting saying this is being investigated. Right now, the likely culprit is water pressure changes associated with testing water storage tanks in town.

Snow in Cary This Weekend Unlikely