Cary, NC – With several large items on the agenda, including the Trimble Avenue rezoning case, the widening of Reedy Creek Road and the 2018 budget, it was another long meeting at Cary Town Hall.

Note: The agenda item to vote on the Demolition and Removal of the 209 Marilyn Circle property was moved to a future meeting.

The agenda item at the Thursday, June 22, 2017 meeting that got the most attention was a vote on the rezoning of 2.58 acres in the Scottish Hills neighborhood. The land was sold to Habitat for Humanity by Bethel Baptist Church and has undergone a number of changes, going from 23 townhomes to now seven single family houses.

The first Public Hearing for the case brought out a large number of residents and speakers. At that meeting, the comments were mostly against the plan, although that was before it was changed to an R-8 Conditional Use rezoning that Town Council voted on at the June 22 meeting.

Now that Town Council was voting on the measure, speakers could only talk during the Public Speaks Out segment of the meeting. 20 people spoke about the case, 12 of whom were opposed. Reasons given included concerns about flooding, the feeling that these houses would not fit in with the neighborhood, a lack of communication by the developers and mischaracterization by the local press. There was one speaker who was against the idea of publical-assisted affordable housing in general, which is Habitat for Humanity’s stated goal for the property, but did not speak to the specific plan for these houses.

Five speakers were in favor of the plan, most of whom talked about the need for affordable housing in Wake County. However, Town Council noted they can only speak to a specific rezoning request and not consider who the developer might be. Also speaking in favor was the new lawyer for the case who came on a little over a month ago. He said the land across the street is zoned for R-8 so an R-8 CU rezoning here would be appropriate. Also speaking were two pastors at Bethel Baptist Church who said their desire is just to sell the land and avoid arguments.

One speaker was in favor of affordable housing but said the allocation of money in this case was strange and wanted more units on the property. 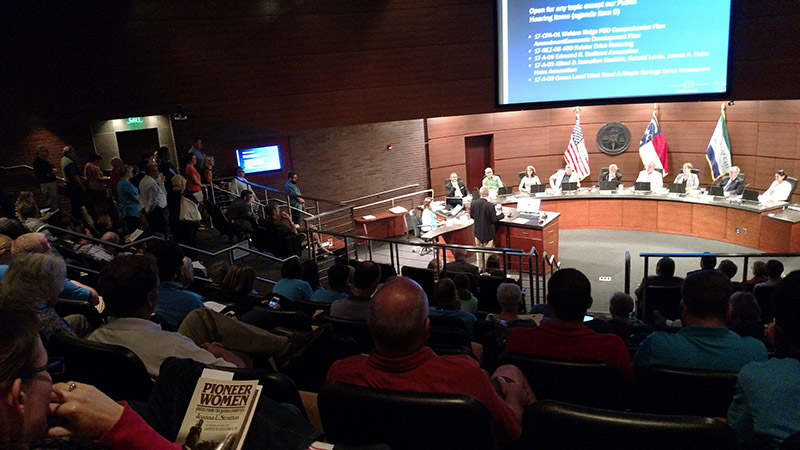 The audience at the June 22, 2017 Town Council meeting

The case got added attention outside of Cary when the town’s Planning and Zoning Board voted not to approve the rezoning. But as Board Chair Mark Evangelista told Town Council, that was before the rezoning was changed to R-8 CU, limiting the developers to seven units. Evangelista said there were the major concerns of the board members voting against the rezoning are addressed by the change, though admitting he could not speak with full assuredness that if this plan went to the board, it would now be approved.

This element – that the change by the developer to R-8 CU addresses the main concerns – seemed to be the convincing argument for many on the Town Council. But Councilmember Ken George, himself a resident of Scottish Hills, spoke at length about the procedures. He said he consulted other councilmembers for advice but at the end of the day, George said he felt the developers were more focused on the people coming into the neighborhood than those already living in it.

George also said he was upset to hear there were limited conversations between the developers and the neighborhood.

“I think the applicant didn’t follow up because they figured out they got four votes,” George said.

He then made a motion to table the vote to get more communication between the applicant and the neighborhood, as well as to potentially add new conditions. The vote failed 3-4, with councilmembers voting against it explaining they did not think tabling would result in any new changes. The developer’s lawyer also told Town Council a vote to table it would jeopardize their plan.

In the end, the measure passed 5-2, with George and Councilmember Jennifer Robinson voting against it. Robinson’s reason stated was there were certain items, such as stormwater collection from the South of the property into a town-owned piece of land in the North, that were not included as conditions and if Habitat for Humanity was not able to get its grant money to build it, another developer could come in and not do the same work Habitat promised.

“I’ve been burned before in my district,” Robinson said.

Following the Trimble Avenue vote, most people in attendance left the meeting but there were still several items left for Town Council to vote on. Up next was a rezoning of property near the Walnut Street and Tryon Road intersection. It is for a 4,818 square foot restaurant with a drive-thru.

This was also voted down by the Planning and Zoning Board, but like the last item, two of their concerns – the location of the front door relative to incoming traffic and parking space – have been changed prior to this meeting, though questions about traffic flow still exist. One speaker during Public Speaks Out was a lawyer for this case and talked about making these changes. 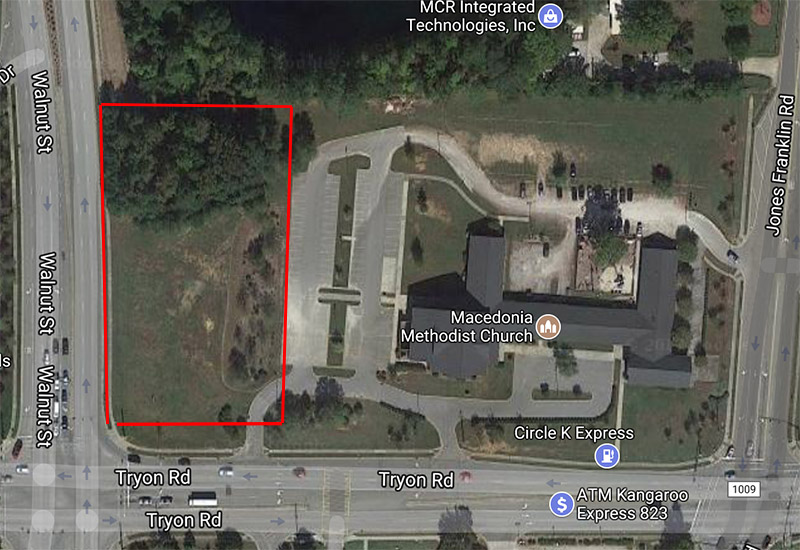 The approximate location of the Walnut Street/Tryon Road rezoning

Councilmember Jack Smith said this intersection serves as one of the gateways into Cary and argued a drive-thru restaurant would be unattractive in this spot. But Mayor Harold Weinbrecht replied by saying this was already an unattractive area with convenience stores and a strip mall. Smith agreed but did not want to “throw up his hands and give up” on this location.

In the end, Town Council voted 5-2 in favor of the rezoning, with Smith and Robinson voting against.

Up next was the vote on widening Reedy Creek Road, which has had problems with dangerous driving in the past and concerns about its proximity to the elementary school. This new road would include medians, sidewalks, bike lanes and two roundabouts and would be completed by 2020.

Two speakers spoke in favor of the plan at Public Speaks Out, although one said the current plan puts a curb into his yard and did not want that. Sammy Wood with Cary’s Transportation and Facilities said he would talk with that speaker and believed they could fix that. The plan passed unanimously.

And the final Discussion Item was the approval of the Fiscal Year 2018 budget. There was no discussion as the budget had been circulated prior to the meeting, and it being close to 11 PM might have had something to do with that too. The budget passed unanimously, but although the new system in Cary will see the budget being reviewed on a quarterly basis.

While the Trimble Avenue rezoning brought out the most people to the meeting, one Public Hearing also had a lot of people in attendance. This was for a rezoning of a former medical office building near the intersection of Tryon Road and Kildaire Farm Road. The applicant’s lawyer explained the plan is to turn it into a grocery store and is requesting a reduction in parking and the removal of two champion trees, one of which he said was dead would need to come down anyway. 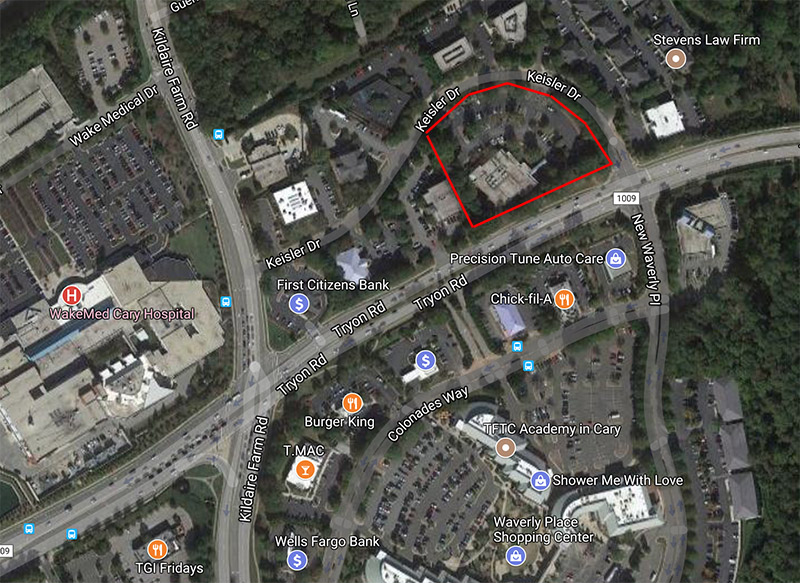 The location of the Tryon Road/Kildaire Farm Road rezoning

Three speakers were opposed to the plan, all naming traffic as their main concerns and one said there are already grocery stores in the area. Town Council were also against it, emphasizing the strength of their disapproval.

“If you change from [Office and Industrial], you better have a good reason,” Weinbrecht said.

One councilmember took it a step further.

“Are you out of your bleeping mind?” Smith said.

The item went to the Planning and Zoning Board, with Councilmember Don Frantz remarking that he was glad he didn’t have to be the bad guy for once.

Three other Public Hearings were for annexations, which saw no discussion. Two of which, on Louis Stephens Drive and Wackena Road, were approved at the meeting by Town Council, while a Green Level West Road rezoning will be voted on at a future meeting.

The only other item was a Public Hearing on a PDD Comprehensive Plan Amendment. The land lies in the Chatham-Cary Join Land Use Plan and it would change the designation of Low Density Residential to Medium Density Residential, while also changing where the residential land would be and where the office and institutional land would be. The applicant said this also opens the area up to build a school there.

The item was then sent to the Planning and Zoning Board for their recommendation.