Cary, NC – The Carolina Hurricanes won both their matches this weekend, including one game where the Canes won with a hat trick.

On a game sure to be filled with emotion, with Jeff Skinner making his first visit to the PNC Arena as a visitor in his nine seasons, the Canes won a very exciting 4-3 game in front of a nearly full house.

The Canes lost a heartbreaker the night before to Tampa Bay, undoubtedly the strongest team in the NHL this season, leading 1-0 with eight minutes to play, then two penalties did the Canes in as the Lightning converted on both adding an empty netter for a 3-1 loss.

That also stopped the Canes season long win streak at five games and could have been a franchise first of winning all three games on a road trip. 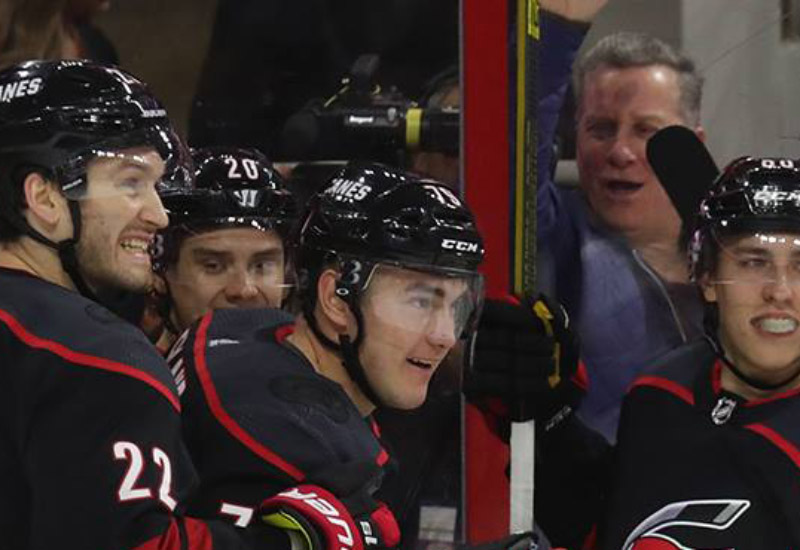 Maybe it was the excitement of Jeff Skinner with his patented boyish, infectious smile, maybe it was the luck of the smart looking black third sweaters, maybe it was a Home Grown Series game or maybe it was how coach Rod Brind’Amour got his team prepared for the game, but the game started fast and never let up.

Both teams have some outstanding young players. Jack Eichel gets better every game and while Skinny is now in his ninth season, he’s still just 26 and pairing these two, with their supporting cast and the Sabres have three first round picks this year, means the Sabres should be a consistent top team in a few years. Both teams are fast and the action early on was an indication of what the entire game would be with rushes up and down the ice, few shots and attempts for tight checking.

The Canes’ Michael Ferland opened the scoring on what turned out to be a majority of goal scored on incidental redirection of the puck. After a feed from Teuvo Teravainen, Ferland went down the left side and, while using the defender as a partial screen, sent a hard shot at Carter Hutton. Hutton attempted a glove save but the puck tip the top of the glove, popped in the air landing on the top of the net and somehow bounced backwards just as a defenseman went to swat the puck away instead tipped it in the net for the 1-0 lead. Very late in the period, rookie call-up Saku Maenalanen got called for tripping, giving the Sabres the man advantage.

Last year’s number one draft pick Rasmussen Dahlin was along the near boards then sent a hard shot/pass to the crease. Curtis McElhinney stuck his stick out making the save but the puck jumped up like tossing a ball to a five-year-old learning how to bat, which was gravy to Skinny at the crease and simply batted it in to tie the game to tie the game and giving him an NHL second best 30 for the season. It also marked the third powerplay goal against in a row for the Canes over the past two games.

The second period, which seems to be the Canes best this season, was just as exciting as the first. Neither team let up on the gas and the speed, hitting, forechecking and skill was flat-out fun to watch. Early in the period, Trevor van Riemsdyk passed the puck to Justin Williams along the far boards. Willie did what in basketball is called a cross over move, as he faked going right then switch his hands, went left leaving Tage Thompson in the dust then picked the upper corner to put the Canes up and continuing his own person hit scoring streak.

Not to be outdone by Willie, the oldest on the second oldest Jason Pominville scored 30 seconds later to again tie the game. Less than a minute later, Sebastian Aho scored his first of the night with a hard pass to Ferland in the dirty area but the puck hit Dahlin’s blade and ricocheted into the net. Late in the period, Ferland came down the right side with speed, Seabass was on his left and three defenders in position.

Ferland looked to make a pass but instead send a hard shot along the ice, Hutton made the save but Seabass picked up the rebound, went around the net and dumped the puck, hoping for a teammate to knock it in but the puck hit Jake McCabe’s boot, sliding under Hutton for Seabass’ second of the night with both goals going off defenders.

Late in the period, Johan Larsson tried to flatten Justin Faulk on his blindside but Faulker got a quick glance and avoided the major hit. Faulker took exception with the play and immediately went after Larsson getting an extra two minutes for instigating the tussle.

With playing the back end of bad to back games, the Canes showed no signs of fatigue in the third. Brind’Amour continued to play all four forward lines and the fourth line was utilizing their speed and energy. The Canes’ defense was solid with Jaccob Slavin and Brett Pesce playing exceptionally well. All other defensemen, Dougie Hamilton, who had a golden opportunity early in the game, Calvin de Haan, TVR and Faulker all played shut down defense.

Very late in the period with the fourth line on the ice, Kyle Okposo came down the near boards with Victor Rask forcing him to stay wide. Okoposo sent the puck to the center with Maenalanen covering his man but the puck hit his stick, jumping over CMac’s left shoulder for the fourth goal of the game going in off a defender. The Sabres pulled their goalie for the extra attacker but the Canes held on for the 4-3 win.

In keeping with no two celebrations alike, the Canes did their version of human bowling with Willie using his helmet as a bowling ball and was lucky to get the strike as Ferland teetered a bit but finally went down to the roar of the Caniacs.

The Carolina Hurricanes continue their drive into a wild card playoff spot with a solid 6-3 win over a very good Nashville Predator team who could easily be the western team in the Stanley Cup Finals. Canes coach Rod Brind’Amour called former Canes coach, and now Nashville’s coach, Peter Laviolette the best coach in the NHL and had said he learned much about coaching when Lavi was with the Canes.

Sebastian Aho bookended all scoring with a breakaway goal to start and a short handed empty net goal to game in front our a loud and happy crowd.

The Preds won the opening faceoff and spent the first 30 seconds of the game in the Canes’ end. The Preds are a big team and have some very skilled players in every position. Once the Canes got possession, the next minute-plus was all in the Preds’ end with the Canes matching speed and doing some outstanding forechecking in the offensive end while getting off several shots.

The Canes’ Dougie Hamilton got called for an early hooking penalty that wasn’t obvious to a non-official even after viewing several replays. Roddy “was doing war” with his gum in between possible comments to the refs for a complimentary visit to the team’s eye doctor. Maybe that paid off as the Preds’ Craig Smith got called for a slash 50 seconds into Hamilton’s penalty that had Lavi doing one of his patented stares at both the refs and Smith in the box.

While the Canes were on the abbreviated power play, Aho gave Justin Faulk a beautiful pass that Pekka Rinne made an excellent save to keep the game scoreless. Late in the period, Seabass intercepted a sloppy pass, pushed the puck forward just enough so he could go full tilt just ahead of his defender then sent a wicked shot five-hole to beat fellow Finn Rinne. Just two and a half minutes later, Calvin de Haan fed Faulker as he was joining the rush on the left side. Faulk stopped at the outside of the near faceoff circle and threaded a pass to Saku Maenalean in the slot sending a quick one timer into the upper right corner to give the Canes a quick 2-0 lead.

Nashville started off strong in the second, after what can only be guessed as some choice words by Lavi during the intermission. Roman Josi took the puck through the neutral zone into the Canes’ end with ease as there seemed to be a mental lapse on checking by the Canes. Josi went in deep and made a beautiful cross ice pass to Colton Sissons all alone on Petr Mrazek’s left for an easy tip in to cut the lead 2-1.

With the Canes on their second abbreviated power play, Michael Ferland had the puck on the far side and made an ill advised pass to Seabass on the right. Rinne was in perfect position but Seabass was able to send his slap shot through a crack to out the Canes back up by two. So much for the ill advised pass.

At just over the eight minute mark some words had to be exchanged as Ferland was in front of the Preds’ bench, tossed off his gloves, shed his helmet then skated cross ice for Austin Watson who was waiting with his gloves off. The fight ended quickly as Ferland clocked Watson with a wicked right handed haymaker. Ferland got an extra two minutes as tossing a helmet before an altercation is a penalty. Two things the helmet does during a fight: it hurts like crazy if you punch a helmet and more importantly, it protects the head if you fall backwards on the ice which used to happen very frequently in the past. During the four-on-four, Brock McGinn gave a nice pass up to Lucas Wallmark, who out-skated a defender sending a wrister past Rinne.

Less than two minutes later, the Canes were on another powerplay. With the play all in the Preds’ end, Seabass sent the puck to the crease area with five players jostling for the puck. My view had the puck last touching Ferland before going in off two defenders but the official scorer gave it to Justin Williams who extended his goal streak to five games in a row.

Late in the period, Josi had almost the same play he did earlier except the lucky recipient was Filip Forsberg. While the puck clearly went off his skate, there was no kicking motion so it was a good goal. 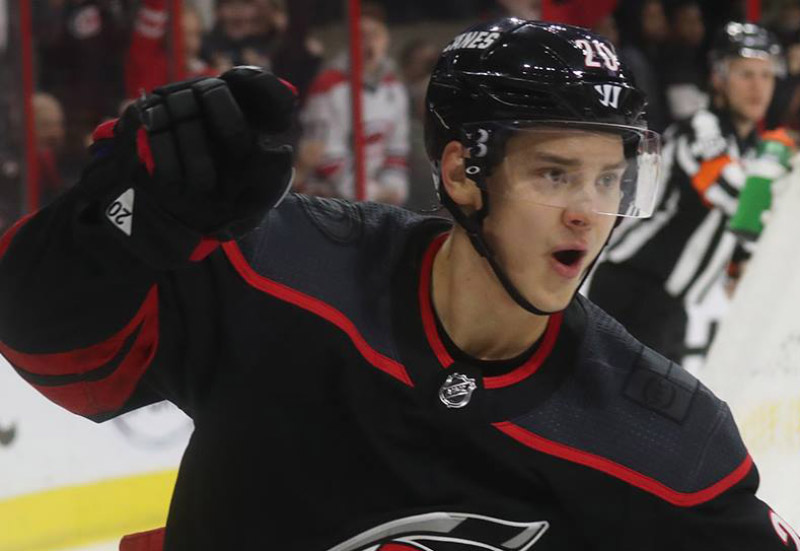 The Canes were playing with the lead in the third, meaning being very cautious in their D-zone and going for possession and the perfect shot on the O-zone along with excellent forechecking all over the ice. Roddy continued to play all four lines with the comfortable lead and not taking anything away from the fourth line as they were outstanding on the forechecking, especially Warren Foegele.

Forsberg scored another goal at the 13:33 mark giving the Preds some life and this being a solid team, Roddy knew everyone was going to have to buckle down hard to keep the lead. Victor Rask got called for hooking giving the Preds a powerplay with 4:34 left. Lavi kept the powerplay the usual five skaters but pulled the goalie with about 45 seconds remaining giving them a six-on-four skater advantage.

Brett Pesce intercepted a pass and pushed it along the far boards. Seabass turned on his jets and with a defender all over him imitated Eric Cole, dropped the left shoulder, made a power move slamming the puck into the net to seal the wind and complete his second hat trick of the season. Another new team celebration kept everyone in their seats joining in on the Canes’ specialty.

Sad news: the Canes lost a near a dear fan last week, long time Cary resident Joyce Emerson who found nothing but good things about every Cane player. She’ll be greatly missed.