Cary, NC – This week was the first week with a normal schedule in quite a while.

Later Monday I was joined by Mayor Pro-Tem Bush in a meeting with key staff members on the agenda for Thursday’s regularly scheduled council meeting. We discussed council questions and concerns, and what information should be included in staff presentations.

My last meeting on Monday was my weekly one-on-one with the town manager. Topics of discussion included textile recycling (an idea presented by Mayor Pro-Tem Bush), the future of Cary Town mall, upcoming elections, and infighting of nearby governing bodies.

Tuesday I met with N.C. Senator Sam Searcy and his administrative aid. We talked about Cary and the surrounding municipalities including elected officials. I was impressed with his knowledge and his desire to do what is best for the citizens he represents. He described himself as a fiscal conservative and a social liberal which is exactly how I describe myself. No wonder we got along. I am looking forward to working with him in his first term. 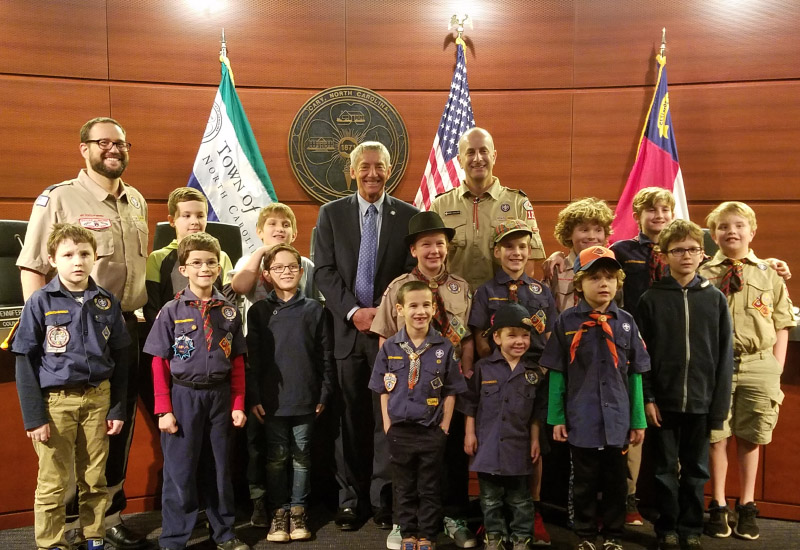 Later Tuesday I spoke to Pack 120 at town hall. There were about 15 scouts in attendance with their parents. My talk was about what I do as a mayor. Next they took turns sitting at the council table and held mock votes after hearing comments for and against a topic. Afterwards we took pictures and then a brief tour around town hall. Everyone seemed to have a good time.

Thursday the council held its first regularly scheduled meeting of the year. The agenda included nine consent items, two public hearings, four discussion items, and a closed session. Council member George pulled the consent item that conveyed town owned property to Habitat for Humanity. He wanted to create an easement in the conveyed land in case the town wanted to build a sidewalk in the future.

A public hearing on the Green Level West Road Office rezoning drew about fifteen speakers. Most of the speakers were against the proposal stating that it should remain residential. The speakers in favor of the proposal touted the great Cary company Net32. However, considering the applicant’s intended business is not part of the rezoning (since rezoning is about the type of use not the user) and those comments cannot be considered in the decision. Other speakers in favor stated that this would be a good transition for the large destination center planned across the street.  The council will vote on this in a few months after it is been reviewed by the Planning and Zoning Board.

The discussion item that resulted in the most conversation was the rezoning proposal at Green Level West Road and Pine Rail Lane. The proposal included 75 townhomes in addition to single family homes. The Planning and Zoning Board’s recommendation was a unanimously denial. They stated that the land use plan for that area had densities becoming less as development goes west from highway 55. The staff, on the other hand, recommended approval stating that overall densities in the region were appropriate. In the discussion among council members it was pointed out that the townhomes were not visible and gave it an overall rural feel. Council members also pointed out that having a progression of less density from east to west was not realistic. The original intent of the land use plan was to preserve the rural feel and of course “rural” is open to interpretation. Council eventually approved the proposal six to one. Following the discussion items the council went into closed session. The council meeting was adjourned after 3 hours.

Proposed Amendments to the Delegation of Authority

On the January 24th consent agenda, you’ll see a staff recommendation for amendments to the “Resolution Delegating Authority.” The purpose of these amendments is to streamline procurement and contract and legal approval requirements. Key issues include expanded authority to manage bankruptcy proceedings and higher limits of purchase and contracting authority for department directors and deputy finance officers. This allows staff who are closest to the work to remain responsible throughout the process. Existing processes for oversight of the Town’s procurement remain in place.

The draft FY20 Wake Transit Work Plan will be presented to the Transit Planning Advisory Committee (TPAC) on January 22nd, marking the beginning of a 30-day public comment period. The draft includes $22.7M in capital and operating projects for the Cary, including $19.1M for the construction of the Bus Operations and Maintenance Facility on Towerview Court. The list also includes:

Hosted by NCDOT on Jan 9-10, the NC Transportation Summit gathered stakeholders from both the public and private sectors to discuss transportation safety, future transportation funding and new and disruptive technologies. The summit began with a keynote from Governor Cooper. Transportation & Facilities staff participated in the 2-day event.

New sources of transportation funding are essential as the national gas tax, 18.4 cents per gallon, has not increased in 25 years. As a result, the main source of revenue for the Federal Highway Trust Fund has decreased due to greater fuel efficiency and the growth in electric vehicles, and it’s expected to continue declining. In the last five years, 28 states have increased the gas tax to increase funding transportation projects. An alternative to the gas tax is a Vehicle Miles Traveled (VMT) fee/tax. A voluntary VMT pilot may roll out in the next year or two by the federal government. Other pilots are already underway including Oregon’s voluntary pilot where users are charged 1.5 cents/mile rather than 30 cents/gallon gas tax, Illinois’ VMT fee for trucks only, and Tennessee’s 1 cent/mile for autonomous vehicles (AV) put in place before the vehicles hit the road.

Kilmayne Drive from Kildaire Farm Road to SE Maynard Road has been repaved and is once again open to traffic. Traveling along this street not only bypasses the Kildaire Farm and Maynard Road intersection, it also provides an up-close view of the Town’s newest utility infrastructure, the Kilmayne Drive Elevated Water Storage Tank. Street reconstruction was the final stage of the tank construction project. The tank is undergoing final testing and expected to be in service by the end of January. This 2 million gallon water storage tank is a key component to ensuring reliable water service and providing resiliency to the water distribution system.

Next week, we will start a conversation with citizens in the Preston Village and Heritage Pines area regarding our upcoming sixth pressure zone shift. Notice letters have been mailed to about 1,200 residences. The next shift is scheduled for April 9. Our next opportunity to speak with citizens will be at a public meeting on February 5 at Green Hope Elementary School. If you or your constituents have questions, we’ve developed a helpful FAQ web page. This project is necessary to provide greater operational flexibility and efficiency, as well as prepare to bring into service the Good Hope Church Road Water Storage Tank in 2019.

The Lazy Daze Arts and Crafts Festival won the Best Festival in the 2018 WRAL’s Voters’ Choice Awards! Koka Booth Amphitheater received honorable mention for Outdoor Movie Series, the WakeMed Movies by Moonlight, and as a Performing Arts Venue. The Cary Arts Center and The Cary Theatre were also nominated. Thank you to everyone who voted!

A big thank you to everyone who worked throughout the frigid night to repair several water line breaks and ensure that all Cary residents had water when they got up on Friday morning. Water repairs in freezing temperatures are challenging, but our staff rose to the challenge.

Next week’s activities include a legislative reception, a meeting with state senator McKissick on a proposed hotel development in Weston, and a meeting of the Capital Area Metropolitan Planning Organization’s executive board.

Canes Win Big This Weekend, Including a Hat Trick