Cary, NC – It may be just preseason, but having shutouts in both preseason games so far has to be good for the confidence of all four goalies used, head coach Rod Brind’Amour and new goalie coach, the former college teammate of Roddy as well as former Hartford Whaler, Jason Muzzatti, as well as the defensive corps.

The Canes are extremely strong on defense and with the recent signing of Jake Gardiner, rumors are abound regarding at least three veteran D-men. After a solid 3-0 win on Tuesday night in Tampa Bay, the Canes dressed more NHL players than the night before and came away with a strong 2-0 win. If Roddy could have his druthers, he might have wanted more shots on goal and more shots going in. The Bolts had most of their top players playing Tuesday but for both games, all four Canes goalies were not tested that much, but handled whatever came their way very effectively.

You can’t help but notice the mammoth size of the new scoreboard. It’s blue line to blue line with curved corners and the clarity of a high quality HDTV. It is just amazing and should add for more of that entertainment experience the Canes and NHL are going for. One warning: the clarity is so good, if you’re one of the folks the camera hones in on, know you will be seen up close and personal with every flaw and asset in full view as well as those dance moves you never even got right back in middle school. But it will be all in good fun to share with 18,000 of your best friends.

The Canes should have, and did have, the better play from the drop of the first puck. Sebastian Aho had the two new pick-ups, Ryan Dzingel and Erik Haula as wingers. Even with Tampa Bays young guys who are fairly fast, it was a huge difference to see the speed Dzingel and Haula have. They are going to be so much fun to watch as they get more comfortable with the Canes system.

The first period was so much like the game Tuesday night with up and down the ice action with very few challenging shots. The Canes defense was again very solid constantly taking their man out of the play and clearing pucks with a purpose. There was nervous play by both teams, more so by prospects or players with a year or two in the AHL. I was impressed with the play of recently signed Fredrick Claesson on defense. He was very strong on and off the puck with no major mistakes. His follow-through on checks leaves a lasting impression. One notable absence from this year’s team is someone who can help send a message. This NHL is not like the old NHL with enforcers, but teams do need a player or two or three with sandpaper. Michael Fernandez was that guy last year and early in the season when he dropped the gloves, that sent a message to the league. Not sure how that’s going to be handled this year. One thing for sure, Andrew Svechnikov will not be THAT guy. 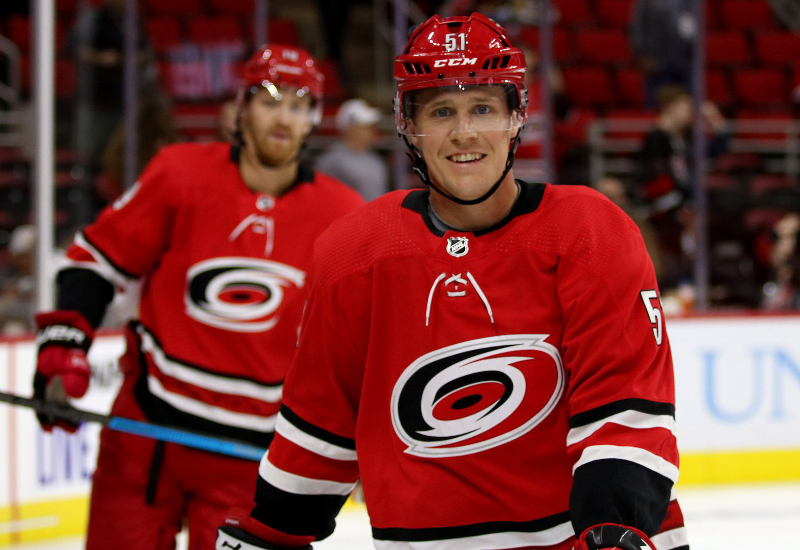 After a few dubs in the first period, Steven Lorentz more than made up for those in the second putting in the eventual game winner. Julien Gauthier carried the puck along the far boards, retaining possession after getting knocked a few times. Just as he was near the far circle, he centered a pass that was blocked but Lorentz was quick to get his stick in position for a shot that went in before the goalie had time to react.

Dirty area goals again will be key for the Canes to repeat their success since January. The play Svech showed in this preseason game was a huge improvement from his first last year. Dougie Hamilton predicted 50 goals for Svech this year that brought a broad smile to the young Russian. Like many (but not all by any means) rookies, Svech got better every game last year. He rested one day in Russia then went back to working out. He should be very, very exciting to watch this year.

Clark Bishop played about 20 games for the Canes last year, scoring one goal. He’s another very talented forward who constantly keeps his eyes on the puck. After digging for the puck behind the net, he went to the crease area as all centers should. A bad clear by the Bolts defense had the puck slid between a defender’s legs who was guarding Bishop. Bishop wasted no time in lifting the puck from about seven feet out to the top right corner not giving the keeper a chance. Good confidence booster and one that put a smile on Roddy. Brind’Amour will have to make some tough decisions about which forwards to keep.

One could argue there are no glaring openings, or at best two, but that may require someone who played all or most of last season in Raleigh to make a trek back to Charlotte. Great problem to have.

Including the 2006 team, this roster may be the strongest roster starting a season the Canes have had in 15 years. Certain players are expected to do certain things- –Aho, Teravainen; certain players are hopefully to have breakout years – Svechnikov, Haula, Dzingel and other players are expected to be their usual solid selves – Jaccob Slavic, Brett Pesce, Hamilton, Faulk, Gardiner. Goalkeeping is probably the biggest question mark but the Canes are deep with four NHL ready goalies so if one falters, one is ready to step up.

Next preseason game is Friday, September 27, 2019 against Nashville and is part of the CaryCitizen.com 3-for-1 group deal. If interested, email me at bfennel11@yahoo.com. 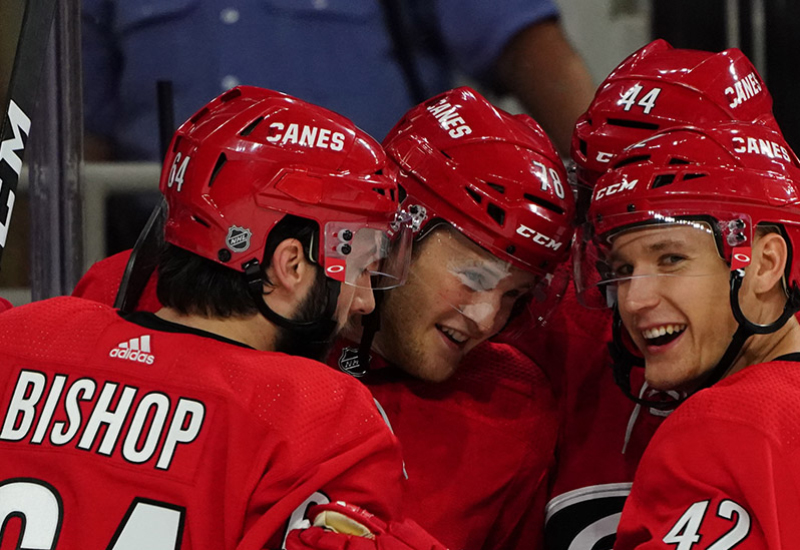