Cary, NC – Coaches strive for getting goals that are a result of hard work and continuous effort in front of the net after a shot is blocked. One name for this is greasy goals. In addition to getting under every opponent’s skin, Chad LaRose made a career getting those greasy goals. Those goals count as much as the jaw dropping, highlight reel goals by Connor McDavid.

The Canes scored two greasy goals in their season opener against the Montreal Canadiens, 4-3 in a very unpredictable shootout with the tall guy, Dougie Hamilton, scoring the only goal in the shootout.

The Canes gave LED bracelets to everyone in attendance that helped make the opening night special. The bracelets had colored lights that were controlled through a central system that enabled rows, sections or even individuals to have their lights light up on cue and the right color. Very impressive. The crowd picked up where they left off from the playoffs, loud from the moment they stepped foot in the arena. Both national anthems were sung loud and the emphasis on RED during the Star Spangled Banner may have topped an all time decibel high.

Andrei Svechnikov, whose first words in English may have been “shoot more,” got the Canes first shot off at just eight seconds into the game. The Canes’ first two shifts were excellent keeping the pressure in Les Habs’ end. On the first shot attempt by Montreal, Hamilton made a great block in the mid slot area while knocking Jonathan Drouin out of the area. Tim Gleason is in charge of Defense Player Development, and while Gleason was more of a stay at home defenseman, the defensive play by all five skaters was strong in all three zones.

Jordan Martinook got the team’s first penalty with a trip because of his aggressive play. The Canes’ man-down defense, especially goalie Peter Mrazek, did a great job on the kill as there were few solid scoring chances. Late in the period, Lucas Wallmark won a faceoff in the circle to All Star goalie, Carey Price, drawing the puck back to Brett Pesce. Pesce, gathered the puck along the boards, faked going down along the boards then went to his left for an open shooting lane. He got the shot off but it was blocked in front. While Pesce had the puck up top, Wallmark went in front of the net and was able to punch in the loose change for a greasy goal with Rod Brind’Amour on the bench smiling like everything went as planned. 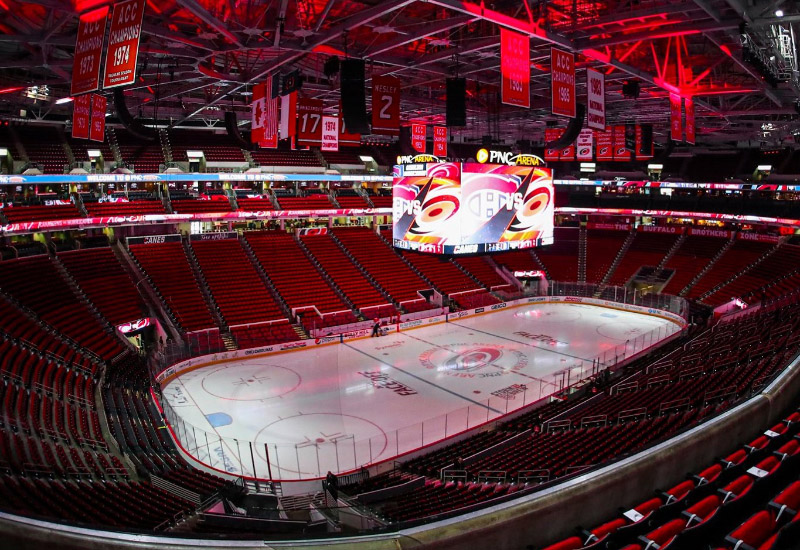 The Canes had their first powerplay early in the second. Roddy said numerous time over the summer, as well as during the playoffs, the powerplay needs to improve. Not by a little tweak here or there, but major improvement. Newly signed Jake Gardiner has an excellent history of quarterbacking power plays and was a big factor in acquiring the gnarly defenseman. One key factor for a powerplay is quick movement of the puck and that’s what the Canes had. Teuvo Teravainen was in the circle to the left of Price and received a diagonal pass from Sebastian Aho on the left point. Turbo passed up to Hamilton who sent a one time towards the goal.

Rookie Martin Necas was camped out in front and tipped the puck down, deflecting it just so that it got by Price for a powerplay goal. Coaches have always said a two-goal lead with plenty of time in a game is tough and how true that was. After that goal, a combination of the Canes not adhering to their game and the Canadiens responding to coach Claude Julien, stung the Canes and really quoted the Caniacs with three goals in the period. Bad clears, bad defensive coverage or no coverage at all, allowed the Habs to take control of the game. There are times the players want a period to be longer and a time the coaches wanted the period to end so things could be addressed in the locker room. This was one of those times.

Whatever Roddy said during the intermission worked. The Canes got their game back and started taking control again. Like the Canes, the Canadiens are a fast team. While Edmonton is known for having so many first overall picks, the Canadiens have six first overall picks on their team along with one #2. That really is unbelievable and should be a better team than they are.

Hamilton has never met a shot he doesn’t like and joined the rush going down the left side. After the shot he circled the net and rather than quickly getting back on a defensive position, stayed low on the left doorstep. The puck was loose in the crease area that Hamilton muscled a shot off but was tipped by a defender going wide. Newcomer Erik Haula was there on the right for the second greasy goal of the game. Somewhere in the Detroit area, LaRose has to be cheering. The game was well played up and down through the rest of the period with both goalies rising to the occasion.

The Canes had a slight advantage in the overtime but Price was unbeatable. With the Canes history of shootouts and with Price in goal, it could have been an ugly ending. In a big surprise move, Roddy sent Hamilton out for the first shot and Hamilton delivered going 5-hole on Price. All other shooters were blocked with Mrazek pumping his glove after the final save. Hamilton led the first Storm Surge of the year, reminiscent of the first Storm Surge from last year with the full house joining in on the celebration. 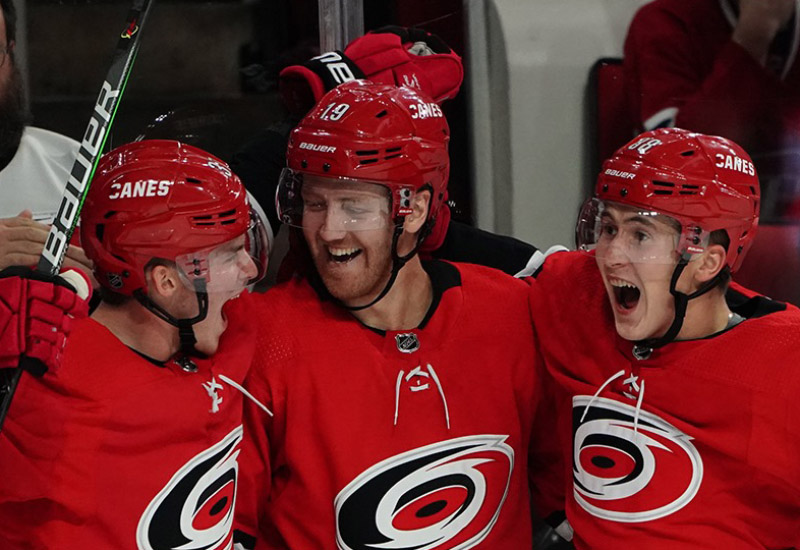