Cary, NC – This weekend looked like another continuation of the Carolina Hurricanes’ historic winning streak after a victory over the Islanders at home, but it all ended in one shot after a narrow loss to the Columbus Blue Jackets.

Last year, it was the Storm Surge that had everyone in the NHL talking about the Canes along with their second half rebound. This year, everyone is talking about their 5-0-0 start with NBC-NHL putting the Canes as the #1 power team thus far in the season. No disrespect to that organization but putting the only team to win its first five games without a defeat, and the first three games coming from behind late in the game, isn’t a real hard determination. Much of the chatter on press row by visiting TV and radio folks has much of the credit going to coach Rod Brind’Amour and President/GM Don Waddell.

You have to stretch definitions to call Sebastian Aho a top star, not to be confused that he is an excellent player, but this is a team with no named or year-after-year top star along with, as some say, players with something to prove coming back from injuries or bad years. Never trailing in the contest, the Canes picked up where they left off in the playoffs and beat the Islanders 5-2 in front of a great crowd. 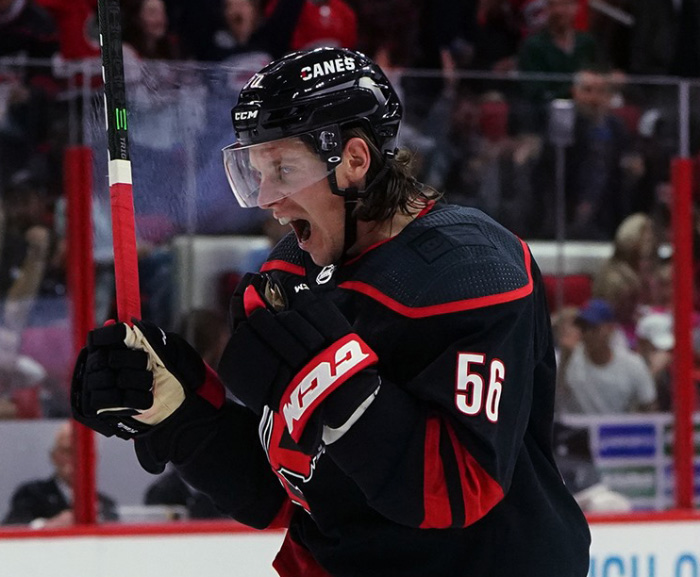 The Islander fans has three bus loads occupy the top part of section 109 and started several Let’s Go Islanders cheers that were quickly outdone by the Caniacs drowning that out with either Let’s Go Canes or Sweep, adding to the fun atmosphere between the two fan bases. Early in the contest, Seabass made a nice pass to Dougie Hamilton in the neutral zone. Hamilton went in on the right side with a lone defender back and Teuvo Teravainen on the left. Just as Hamilton got to the lower half of the circle, he used every bit of his six-foot-six-inches frame, stretching his arms out making a pass behind the defender to Turbo for an easy tip in on Thomas Greiss.

One area Roddy is probably addressing is penalties as they’ve been killing this team. Normally, the Canes are very disciplined and among the league leaders year after year for fewest penalties. Hamilton took a bad interference penalty, bad because Jaccob Slavin was easily handling the puck and didn’t need help, with the Islanders taking all of nine seconds to tie the game as the Canes’ defense seemed to stop defending leaving Peter Mrazek out to dry.

Just under the 15 minute mark, Andrei Svechnikov stole the puck along the near boards in the Isles’ end, did some fancy stick handling to gain space, then threaded the needle with a pass between two defenders, right to Brett Pesce who put a snap wrister in on the short side for his second of the year. Very impressive play by both players.

After a questionable call for icing against the Canes, there was a mix up on who should be on the ice since the Canes had two centers getting ready to faceoff. Just as Aho started to the bench, ref Tim Peel called the Canes for delay of game with four seconds left in the first. The penalty rolled over to the second with the Isles taking advantage of the new sheet of ice. The puck drew a crowd along the near board with all four Canes and four of the five Islanders skaters in the scrum.

Brock Nelson managed to get the puck and made a cross ice pass to a lonely Johnny Boychuk on the right point. Boychuk sent a hard slap shot to Mrazek’s right that upset the netminder for good reason. Erik Haula put the Canes up for what turned out to be the game winner with a gritty goal. Martin Necas had the puck in the near corner, dropping the puck to Haula for an attempt on a cycle. Haula got checked into the boards, bounced off, went left, right, left, right then made a power move to the goal getting off a shot that Greiss blocked but Haula punched in the rebound.

Late in the period in the Isles’ zone, Slavin had the puck up high passing down to Nino Niederreiter in the near circle. El Nino stick handled around his defender then saw Hamilton without friends in the high slot. Hamilton wasted no time sending a slap shot with eyes into the top corner giving the Canes their first two goal lead.

The Canes didn’t take their foot off the gas in the third along with the defense having their best period of the game yielding just two shots on goal. Both Ryan Dzingel and Haula were using their speed to help the Canes keep the pressure on the Islanders. Give Pesce and Slavin credit as they kept the Islanders best player, Mathew Barzel off the score sheet and what appeared to be frustrated as several times he held the puck circling the Canes end trying to find a partner to pass to or to get in a position for a shot but usually wound up having the puck taken away or introduced to the boards. Mrazek had a good outing but once again had a save percentage below .900. That’s a statistic that is more of a talking point than what goalies care about.

The Canes’ strong defense only allowed 19 shots for the entire game and both Islanders’ goals were on powerplays. The win is what it’s all about with goal against average another talking point but does have more importance with coaching staffs, agents and NHL pundits. Islander coach Barry Trotz is a great coach and pulled Greiss with a little over two minutes remaining. Jordan Staal won a faceoff deep in the Canes end with Svech on the receiving end. Svech wasted no time in stick handling between two defenders cleared the Canes end, put on his jets and out skated Adam Pelech to the empty net for his first goal of the season.

It was bound to happen sooner or later, losing that is, but once again the myth of paper vs. ice proved out as the Columbus Blue Jackets beat the Carolina Hurricanes for the Canes’ first loss of this young season. On paper, after the mass exit of top players in Columbus during the off season, including now Hurricanes Ryan Dzingel, the Canes were a much better team.

Among the players the Jackets lost were Sergei Bobrovski, who signed a $70M contract with the Panthers and the Canes chased after scoring four in the first in Florida early this week, and Artemi Paranin, the most sought after forward of free agency. Also on paper is John Tortorella, a coach that gets every ounce out of every player and is the top sound bite for coaches in the NHL.

Haula Scores Fifth of the Season

The Jackets won the opening faceoff, pulling the puck into their end for a set clearing play. The Canes’ forechecking resulted in a turnover allowing the first threat deep in the Jackets’ end. After a shot went wide, the Jackets finally clear their zone and were the early dominate team, sending three quick shots on James Reimer who blocks everything. Hayden Fleury had a scary moment when he got tangled with Alexandre Texier going for a puck along the back boards with Fleury, flying into the boards but was able to turn his head, taking the brunt of the impact with his shoulders.

The Jackets scored midway in the period when there was a complete breakdown of defensive coverage allowing Marcus Nutivaara to camp out all alone on the left side of the crease for a goal that would get Coach Rod Brind’Amour hot. The Canes answered with the fifth goal of the season by Matt Haula just 27 seconds later. Haula is quickly becoming a fan favorite, and why not? He’s scoring as a phenomenal pace, uses his speed well on the ice, follows through every check and is frequently in the right place at the right time. Fellow newcomer, Ryan Dzingel, has those same good traits and if there is a battle for the puck in the crease, good chance both are in the middle of the battle. 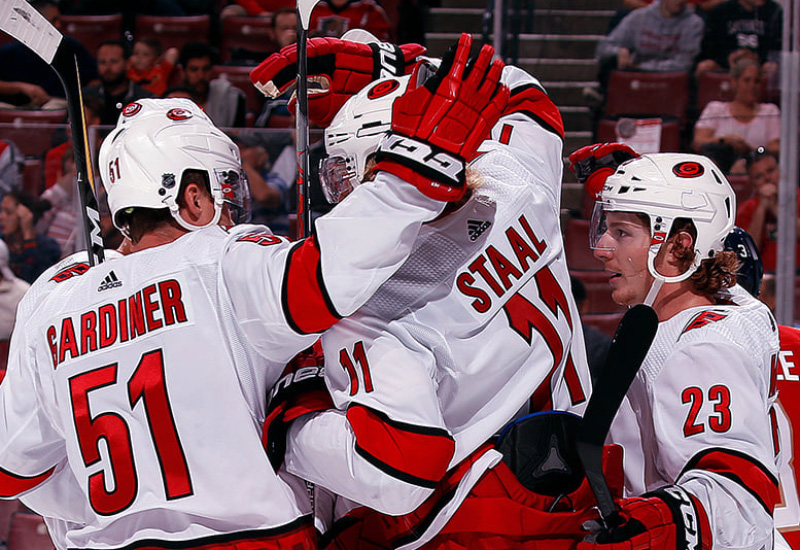 Early in the second, Jordan Staal got robbed with a glove save on a tip in attempt off his stick that came from Joel Edmundson. Pretty looking play but better looking save to keep the game tied at one apiece. The officiating during the first two periods was questionable all around. In the first, Pierre-Luc Dubois had the arm around Staal’s necks as both were skating towards the puck, when the big guy tried to unwrangle himself from the headlock, Dubois fell on the ice with Staal getting the call for holding. During the man down situation, Lucas Wallmark was the front forward, as he was skating backwards, Seth Jones got called for a trip but was probably a make up call as from what I could see, Wallmark simply was near Jones when he lost his footing.

With the fourth line on the ice, Warren Foegele was all energy again making a pass up to Jaccob Slavin. Slavs passed over to lineman Dougie Hamilton, who blasted in this fourth goal in as many games, a new franchise record for defensemen. Like the Canes did earlier, the Jackets quickly answered back, this time in only 17 seconds.

Early in the third Brock McGinn couldn’t handle a bouncing puck at his own blue line that allowed Dubois to steal it. With McGinn dropped all over his, Dubois raced to the Canes’ net, going backhand upstairs for a great looking individual effort goal. The Jackets’ game plan appeared to be keep a big defender all over Seabass as he just wasnt able to skate freely and clog up the center. At all times, there were at least two Blue Jackets in the heavy slot area blocking everyone one and everything going towards the net.

More times than not, the Canes have more shots on net than their opponents. Not this game, as the Jackets kept the pressure on, a typical game plan headed by Torts. The Canes presence in from of the Jackets’ net wasn’t up to what Brind’Amour would like. That presence allows for those cheap garbage goals off rebounds and was noticeably less than all previous games. Brind’Amour pulled Reiner with about 2:30 left and while there were some good opportunities, the Canes couldn’t convert and took their first loss.

Trevor van Riemsdyk was activated just before the game recovering from his shoulder surgery due to a bad hit during the playoffs, a month earlier than expected. That move require Julien Gauthier to get reassigned to Charlotte. This leaves the Canes with one extra defender and one less forward making tricky moves by Roddy for the trip to the west coast.

Next home game is Saturday, October 26, 2019 against the Chicago Blackhawks at 1 PM. Be there! 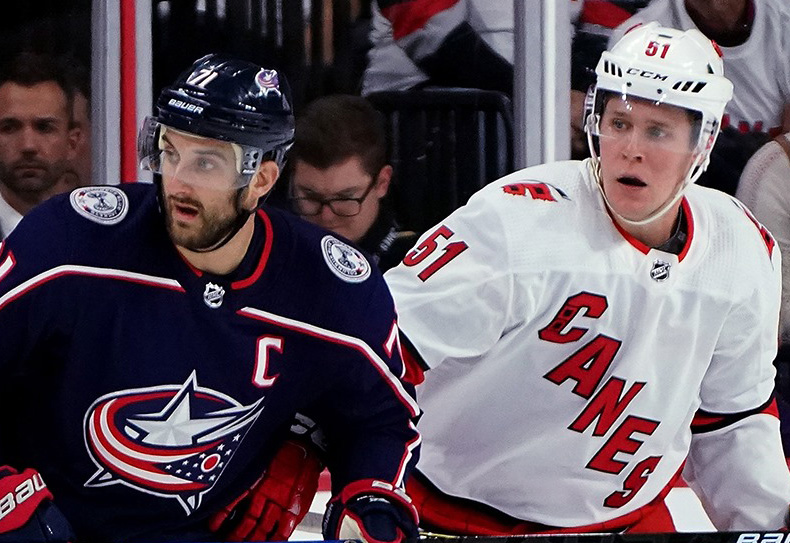