Cary, NC – The latest Cary Town Council meeting saw a vote on the long-debated Weston Parkway hotel rezoning, as well as a vote on proposals to reduce carbon emissions in town, a rezoning proposal to change land for offices to apartments and more.

The Thursday, October 10, 2019 Cary Town Council meeting saw the final vote on the proposal to amend the planned development district along Weston Parkway to allow for a hotel, with conditions attached. This proposal first came up for a Public Hearing in June 2018, and it was delayed further as it was originally up for a vote at the previous meeting but had a continuance to encourage more talks between residents and developers.

The zoning on the 4.94 acres in question is Office and Institutional but does not allow for a hotel use. The amendment would not only allow for a hotel but would increase the allowed building height, with a new maximum of 90 feet instead of 50 feet. The parking requirement is reduced by 19 percent, the streetscape along Old Reedy Creek Road is reduced from 50 feet to 30 feet and a sidewalk would be added along the perimeter of the site. Also, the developers will add to the streetscape along Winstead Drive, as well as a right-turn lane on that road and there will be a signaled walkway for pedestrians added at the corner of Winstead Drive and Weston Parkway. 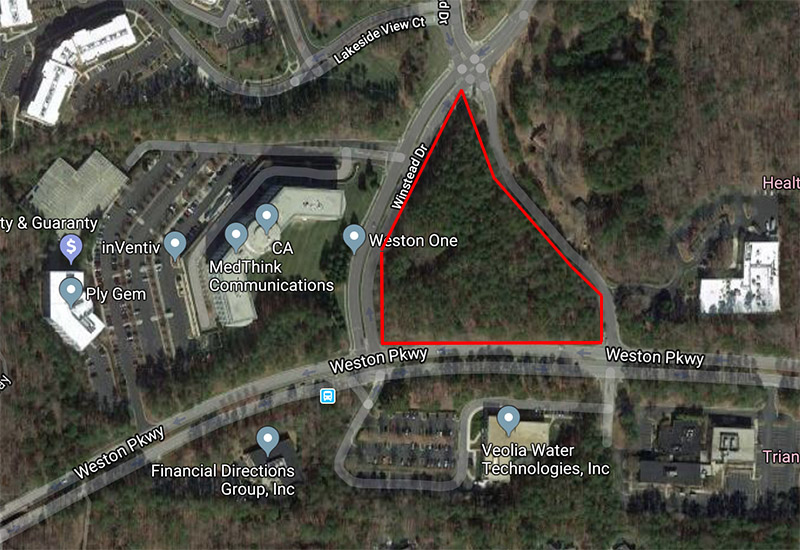 There were ten speakers at Public Speaks Out to talk about this project, with six opposed and four in favor. Of those six, reasons included environmental degradation, impacts on traffic, the 80 percent height increase, how reduced parking will affect overflow to the surrounding neighborhoods and general concerns about how a hotel will impact privacy and quality of life. One speaker also read out a list of names on a petition in opposition to the proposal.

Of the four who were in favor, reasons included boosting the Cary economy, the growth in the area requires a hotel and one speaker said a hotel use is no more objectionable than any other kind of development. Also, a representative for Kimley Horn spoke and talked about working with the neighbors and adding conditions to make it more agreeable. Additionally, the Planning and Zoning Board voted unanimously that this proposal is consistent with the Cary Community Plan, and new Board Chair Ryan Eades said board members cited local need for hotels as well as the topographical constraints on the site that limit what can be built here.

During Town Council’s comments, most said the proposal was consistent with the Cary Community Plan, and while for many height was a concern initially, after a balloon test at 100 feet, they said that visual put many of those concerns to rest, although multiple Council Members said they had changed their mind many times on this particular plan and it was a difficult decision. 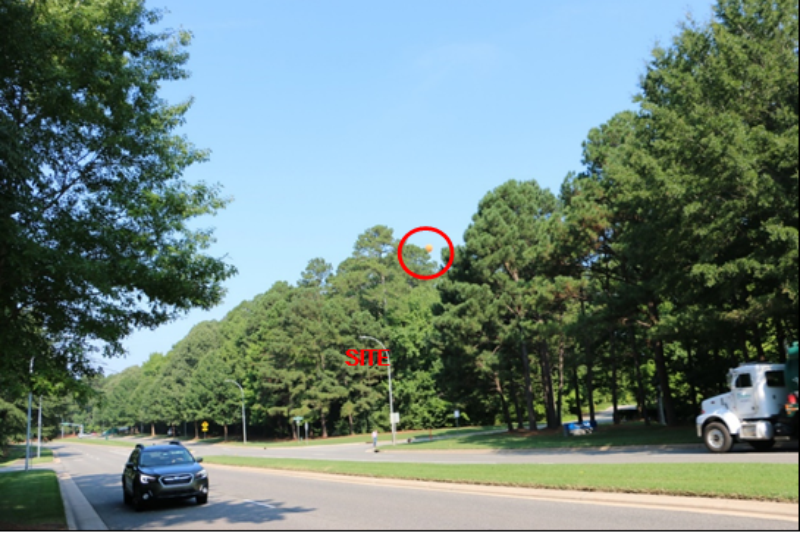 The only vote in opposition came from Council Member At-Large Ed Yerha, who said height was still the main reason why he was opposed. Yerha noted, as did the applicant, that there are taller office buildings in the area such as MetLife, but Yerha said that is much more set back from the roads than this hotel would be.

Before the final vote, Council Member Jack Smith said taller buildings will likely be coming to Cary, as the 50-foot height restrictions were created in the 1980s.

“Vertical is going to be part of Cary,” Smith said. “Our job is to make sure it’s not in a happenstance way.”

The final vote was 6-1, with Yerha as the sole no vote.

The recommendations include seven bullet points of ways to reduce carbon pollution, starting by creating a community-wide baseline that is reviewed and updated at three and five year intervals. Then, the recommendations call for action to reduce carbon pollution through sustainable energy and construction practices, transportation initiatives, green infrastructure, food waste reduction and then community and business education.

Town Council had limited comments; Smith was the council representative on the Environmental Advisory Board and he thanked them for their work. Council Member Ken George also commented that it would be interesting to wonder what Cary would look like today if these recommendations were adopted four years ago.

The only Public Hearing on the agenda was a proposal to rezone 13.93 acres of land in the Alston Activity Center from Office/Research and Development to Mixed Use, with the attached Preliminary Development Plan only allowing for multi-family dwelling units. The site in question is along Petty Farm Road, adjacent to the railroad line.

The conditions call for a maximum of 350 units, with a maximum of 20 of those being three-bedroom apartments. There would also be a maximum parking reduction of 34.8 percent and it would get rid of the conditions requiring an external storage space. Town staff also noted in their report they are concerned about the lack of non-residential uses in this mixed use development, as well as the restrictions created by Petty Farm Road. 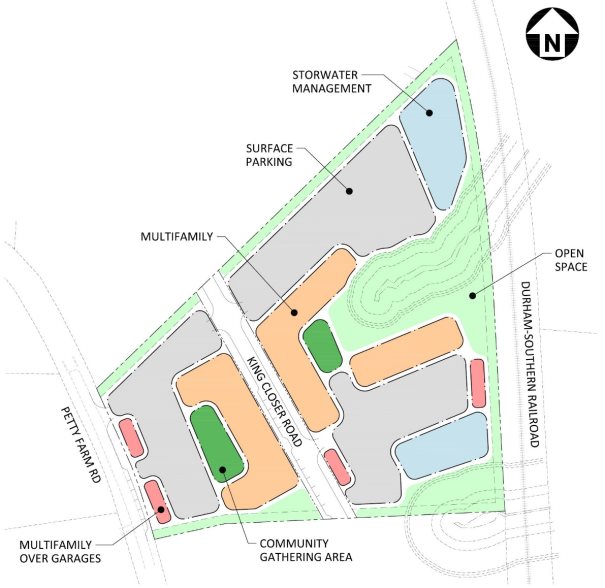 The Preliminary Development Plan for the proposed rezoning

There were no speakers at the Public Hearing but a representative for the applicant did come and explained their decision is made by the topographical challenges on this particular parcel as well as the distance from NC-55, which she said makes it a bad location to attract offices.

Council Member Jennifer Robinson said she has concerns about the parking reduction and Mayor Pro Tem Lori Bush said, based on the Preliminary Development Plan, it looked like the surface parking would be right up against adjacent patio homes, which she said would not make it a good neighbor.

During Public Speaks Out, there were only two speakers not commenting on the Weston Hotel proposal. They were representing the Samaritan Housing Foundation, which owns SearStone, and the SearStone Residents Association. Both were responding to a letter they said was sent to Town Council by Sears Farms about keeping a conservatory in the plans for SearStone’s Phase II. At a Town Council meeting earlier this year, plans for the conservatory are removed for an amended version of Phase II.

Both said they are still not committed to the conservatory and said they wanted to make those opinions known to Town Council.

The 61st Cary Band Day is Saturday, November 2, 2019 and Council Member Ken George gave a proclamation for the upcoming celebration, wearing his own jacket from when he was a member of the Cary High School marching band.

“There was a time when the only thing people knew about Cary was the band,” George said.

There was also a proclamation for Cybersecurity Month in Cary, given by Mayor Pro Tem Lori Bush who also gave tips on cybersecurity, such as not doing financial transactions over public or free WiFi.

This past week has been the SAS Championships and Cary Town Manager Sean Stegall played two ads the Town of Cary has been running on the Golf Channel as the championships have aired.